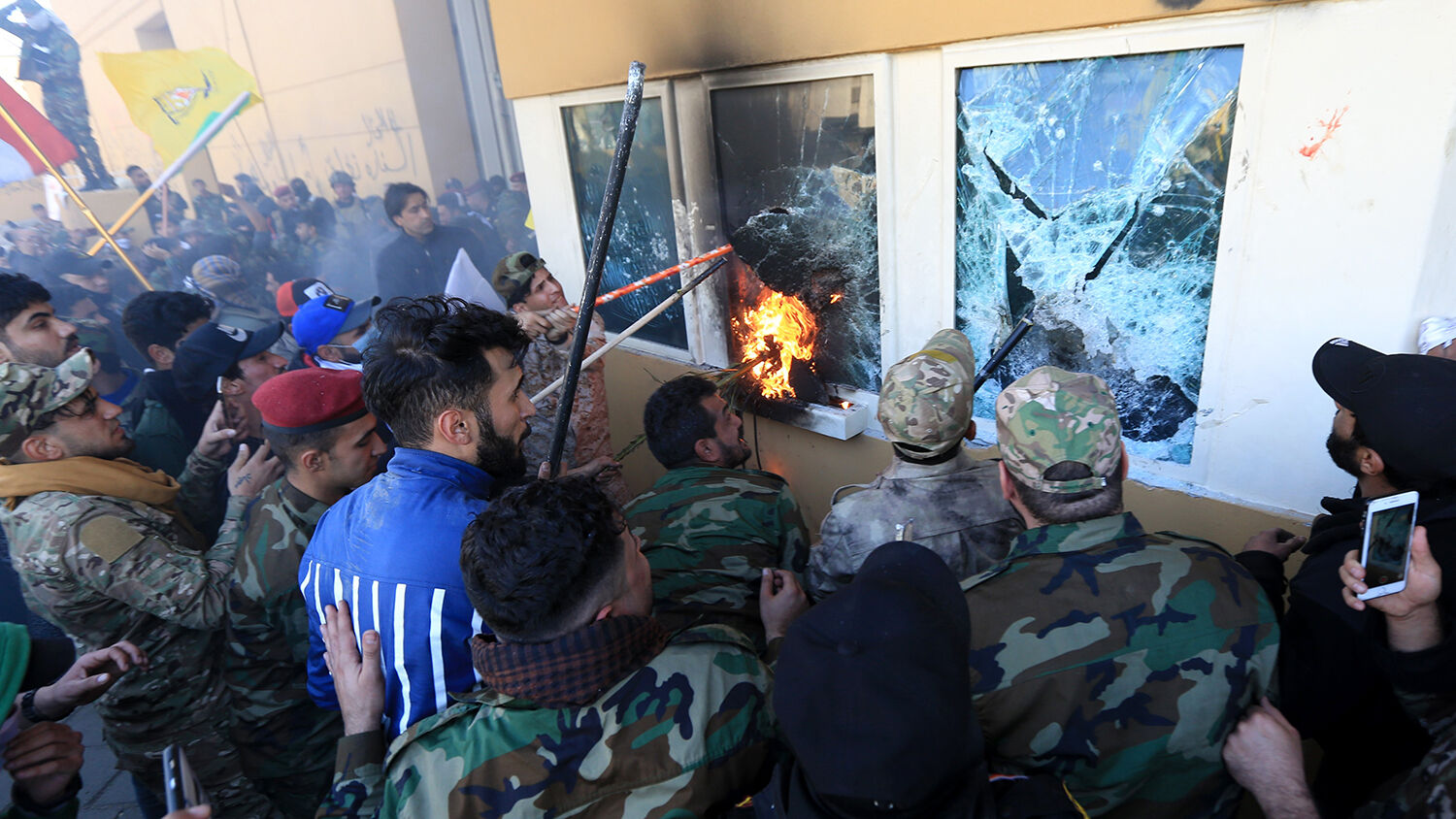 Iran pushes to drive out U.S. military presence in Iraq.

Hundreds of Iran-backed Iraqi militiamen, supporters and politicians stormed the United States Embassy in Baghdad’s fortified Green Zone on Tuesday. Protesters chanted, “Down, down U.S.A.,” threw stones at buildings, broke bulletproof windows, smashed down a steel door with a battering ram, and set fire to parts of the embassy compound.

The message was crystal clear: Out with the United States.

The embassy invasion came in retaliation to U.S. air strikes against an Iran-backed Iraqi militia on Sunday, which led to the death of at least 25 militiamen belonging to Kataib Hezbollah, an Iran-backed militia in the Iraqi Popular Mobilization Units (pmu).

During the protests, dozens of yellow Kataib Hezbollah, white pmu, and several other militia flags flew in the air as they marched up to the embassy and began their siege. Only security card-authorized personnel are supposed to be allowed into Baghdad’s Green Zone, which houses several embassies, the parliament building and the presidential palace; however, since the militias and the protesters were allowed in, logically, the Iraqi Armed Forces must have supported the event.

About 100 U.S. marines were immediately deployed to the embassy from Kuwait with two Apache attack helicopters, which fired several flares throughout the night as warning shots to the crowd. As the siege continued, U.S. marines took defensive measures to protect the few hundred personnel inside the embassy by launching tear gas and stun grenades at the protesters and militias.

This was not an ordinary protest; there was significant planning involved. The militias provided the protesters with logistics support, bringing cooking supplies, food and tents. A Kataib Hezbollah spokesman said that they would besiege the compound until the U.S. decided to shut down the embassy and permanently leave Iraq.

On Twitter, U.S. President Donald Trump blamed Iran for orchestrating the attack, claiming that Iran would be held “fully responsible.”

Iran killed an American contractor, wounding many. We strongly responded, and always will. Now Iran is orchestrating an attack on the U.S. Embassy in Iraq. They will be held fully responsible. In addition, we expect Iraq to use its forces to protect the Embassy, and so notified!

U.S. Secretary of State Mike Pompeo called Iraqi Prime Minister Adel Abdul Mahdi, asking him to stop the protests. Mahdi responded by deploying the Iraqi security forces and telling the people to stop protesting and leave. Though the security forces set up a buffer zone between the embassy building and the protesters, the chaos continued unabated.

Interestingly, protesters finally withdrew on Wednesday afternoon after a decree by the pmu, not the prime minister, showing where the real power in Iraq lies.

Michael Pregent, an Iraq expert at the Hudson Institute, wrote on Thursday, “[The] U.S. embassy attack was Iran’s way of showing they run Iraq.”

Video footage (0:25) from Al-Jazeera showed that the initial march to the embassy was led and coordinated by popular politicians and militia leaders: Qais Khazali, Hadi al-Amiri and Abu Mahdi al-Muhandis who can be seen on the left of the video.

Khazali is the leader of the Asa’ib Ahl al-Haq militia, which was initially trained, funded and led by Iran’s Islamic Revolutionary Guard Corps Quds Force. The militia has accepted the full authority of Iranian Supreme Leader Ayatollah Ali Khamenei. Asaib Ahl al-Haq is a U.S.-designated Foreign Terrorist Organization responsible for several attacks on U.S. troops. Amiri has been the head of the Badr Organization since 2003, when it returned to Iraq after being created in Iran by Iraqi refugees. Amiri described Khamenei as “the leader not only for Iranians, but the Islamic nation.” Amiri has worked closely with Quds Force Cmdr. Qassem Suleimani, who was confirmed dead by a U.S. assassination near the Baghdad airport on Thursday night, along with Muhandis, the leader of both Kataib Hezbollah and the pmu.

Khazali, Amiri and Muhandis are also members of the Iraqi parliament. The three leaders are part of the Fatah Alliance, which is a pro-Iran political party formed by the Asaib Ahl al-Haq, Badr Organization, and Kataib Hezbollah and other militias of the Popular Mobilization Units. The Fatah Alliance gained the second-largest number of seats in the May 2018 general election and is also part of the largest political bloc in the parliament.

Since Prime Minister Mahdi announced his resignation last month, Amiri has been a top contender for the office. The Fatah Alliance will likely be able to push through whomever it selects as its candidate.

The Iraqi government is currently partly composed of, and about to be controlled by, Iran-aligned terrorists.

Mr. Pompeo called out these militia leaders for their involvement in the embassy raid: “The attack today was orchestrated by terrorists, Abu Mahdi al-Muhandis and Qais Khazali, and abetted by Iranian proxies, Hadi al-Amiri and Faleh al-Fayyad. All are pictured outside our embassy.”

In an interview with fox News, Pompeo said that the U.S. does not plan on leaving its embassy in Baghdad or to withdraw its troops from Iraq. Instead, the Pentagon declared that it would deploy an additional 4,000 troops, effective immediately; 750 troops have already deployed from Kuwait.

This raid is Iran’s attempt to push back in any way it can against President Trump’s maximum pressure campaign.

In May 2018, the U.S. withdrew from the 2016 Iran nuclear agreement. When the deal was implemented in January 2016, Trumpet editor in chief Gerald Flurry called it “The Worst Foreign-Policy Blunder in American History,” one of our top 10 landmark articles of the last decade.

Ever since President Trump withdrew from the deal, the U.S. has placed heavy economic sanctions on the Islamic Republic of Iran, specifically targeting its banking, oil and shipping sectors. Since the U.S. began reimplementing the economic sanctions, Iran’s crude oil exports have plummeted from about 2.5 million barrels per day to as low as 100,000 barrels per day in August 2019. This has crippled the nation; crude oil made up 72 percent of its exports in 2017, according to data from the Observatory of Economic Complexity.

Now Iran has lashed out in more brazen ways, such as attacking the Saudi oil pipeline in May, sabotaging oil tankers and shooting down a U.S. drone in June, launching missiles at the world’s largest oil processing facility at Abaqiq in September, and now organizing the raid on the U.S. embassy.

In October, Trumpet Jerusalem correspondent Brent Nagtegaal wrote “The Iranian Attacks Are Just Getting Started.” He explained that based on the current trend, “It is logical to expect another Iranian attack—soon and with greater impact.”

This raid is one of those attacks, and even more intense attacks are likely on the way.

Iranian foreign policy is becoming pushier and more extreme as time goes on. This is a trend the Trumpet has been warning about since the early 1990s.

In 1992, Mr. Flurry told Trumpet readers that he believed Iran would be the king of radical Islam. A December 1994 Trumpet headline by Mr. Flurry asked, “Is Iraq About to Fall to Iran?” That headline was repeated in 2003 when the U.S. ousted Iraq’s Saddam Hussein from power. Today, we see Iran’s conquest of Iraq has become a reality.

How was Mr. Flurry’s prediction so accurate over 20 years? It is because he bases his forecasts on Bible prophecy.

Twenty-five hundred years ago, the Prophet Daniel recorded a vision from God for the “times of the end,” the time just before the return of Jesus Christ. “And at the time of the end shall the king of the south push at him: and the king of the north shall come against him like a whirlwind, with chariots, and with horsemen, and with many ships; and he shall enter into the countries, and shall overflow and pass over” (Daniel 11:40).

In The King of the South, Mr. Flurry proves that the biblical “king of the south” mentioned in verse 40 is radical Islam, led by Iran. He explains:

Iran is the most powerful Islamic country in the Middle East. Can you imagine the power it would have if it gained control of Iraq, which was at one time the third-leading exporter of oil in the world? I predicted as far back as 1992 that this could happen. …

The king of the south is about state-sponsored terrorism. That is how Iran became king! … It is a nation that is always pushy in its foreign policy. It pushes until it starts a war. …

Who else could it be in this end time but Iran? Iran is extremely radical—the king over radical Islam.

Many Iraqis share the same goal with Iran to drive the U.S. out of the nation. Iran has used this common goal to bring the nation under its heavy influence. As Iran’s economy continues to struggle, watch for Iran to increasingly lash out against the U.S., to grab more control in the Middle East, and to become more emboldened.

Iran is an extremely aggressive and radical nation, and its foreign policy is pushing the world to war. However, Bible prophecy says that the United States will not be a part of this conflict with Iran.