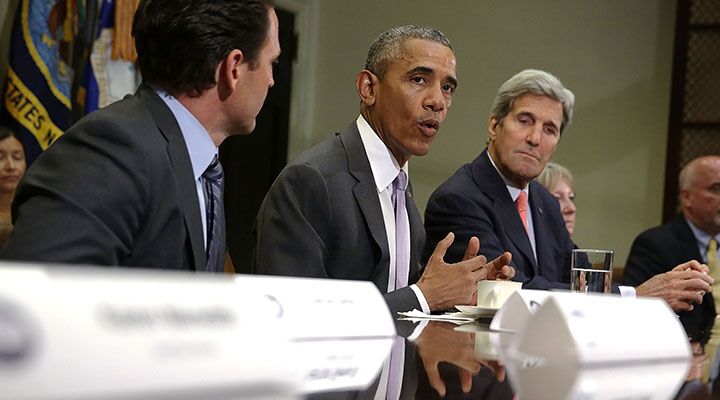 The Obama administration has given the number one terrorist-sponsoring nation in the world a clear path to nuclear weapons.

The world became a safer place on January 16, according to United States Secretary of State John Kerry. That day marked the implementation of the disastrous nuclear deal with Iran. The U.S. and the European Union lifted sanctions on Iran and released about $100 billion in frozen assets—and they received nothing in return!

This cataclysmic foreign-policy blunder is the first day of the worst suffering ever on this planet! “For then shall be great tribulation, such as was not since the beginning of the world to this time, no, nor ever shall be. And except those days should be shortened, there should no flesh be saved: but for the elect’s sake those days shall be shortened” (Matthew 24:21-22).

The Iran deal contains bad news and good news. The bad news is that Iran is now capable of triggering World War iii (Daniel 11:40). The good news is that Jesus Christ will return to stop mankind from annihilating itself (Daniel 2:44).

The timing of events surrounding the nuclear deal reveals the involvement of an evil spirit power. Satan is a master at distracting people from what is most important.

“And the great dragon was cast out, that old serpent, called the Devil, and Satan, which deceiveth the whole world: he was cast out into the earth, and his angels were cast out with him” (Revelation 12:9). You can prove that Satan was cast down from the heavens 30 years ago following the death of Herbert W. Armstrong. Now, the devil and legions of demons are confined to this Earth and accelerating the pace of turmoil and violence! This will end in nuclear warfare, barring some deep repenting, which is highly unlikely.

Diplomacy with a maniacal nation like Iran will never succeed. Just four days before the implementation of the nuclear deal, Iran humiliated the U.S. Navy—holding some of its sailors hostage at gunpoint for supposedly drifting into Iranian waters.

One of two small Navy Riverine boats had broken down as the sailors moved between Kuwait and Bahrain in the Persian Gulf. If this boat had a propulsion issue that caused it to go adrift, it is hard to explain how the boat was up and running the very next day. Does Iran have the technology to shut down enemy vessels?

Taking U.S. sailors hostage, parading their humiliation before the world, and demanding an apology from them constituted a strong power play for Iran. The mullahs sent an ominous message to the world, and especially to the rest of the Middle East: You can’t rely on America for protection and support anymore. We are in charge here.

Hours after the hostage situation, President Barack Obama gave his State of the Union address. The administration had initially hoped to cover up the incident, so Mr. Obama never mentioned it during his speech. However, he did say that America is the most powerful nation in the world by far.

Is that still true?

“Therefore rejoice, ye heavens, and ye that dwell in them. Woe to the inhabiters of the earth and of the sea! for the devil is come down unto you, having great wrath, because he knoweth that he hath but a short time” (verse 12). Woe! Of all the nations on Earth, Satan and the demons hate the nations of Israel most of all. They are working urgently behind the scenes to undermine and topple America, Britain and the Jewish nation in the Middle East. Iran’s embarrassment of the U.S. Navy is just another example of that strategy at work.

It’s no coincidence that a lopsided prison swap with Iran took place at the same time as the implementation of the nuclear deal. The U.S. forfeited 21 Iranians—seven of them being held as suspects in sanctions violations, 14 of them criminals with international warrants out for their arrest. In return, Iran released five American hostages who hadn’t committed any crimes! Even still, the swap excluded former fbi agent Robert Levinson, who went missing in Iran nearly nine years ago.

American officials claimed that the Iranians had initially demanded the U.S. release even more of their people, so the eventual agreement represented a victory for diplomacy. Think about that: America is saying, This deal could have been even more unfair, if not for diplomatic talks! How can anyone in his right mind believe this? Iran parlayed several kidnappings into the release of criminals! When America responds to aggression this way, what is stopping Iran from continuing to exploit such weakness?

One U.S. official called the prisoner swap a humanitarian gesture on Iran’s part. Iran is the number one terrorist-sponsoring nation in the world! Its leaders will never negotiate unless they get everything they want! How can you reason with a mind that considers Iran’s actions humanitarian?

Of course, having American hostages returning home is a cause for celebration. But this could have taken place for a much lower price. Just like Iran’s embarrassment of the U.S. Navy, the prisoner swap is a distraction away from the real issue: the nuclear deal.

Under the agreement, _______ has agreed to freeze its existing nuclear program and to accept international inspection of all existing facilities. This agreement represents the first step on the road to a nuclear-free _______. It does not rely on trust. Compliance will be certified by the International Atomic Energy Agency.

Trumpet writer Jeremiah Jacques quoted a U.S. president who made the above statement about a certain country’s nuclear program. Though these words may apply to President Obama and Iran, they are actually the words of then President Bill Clinton—about North Korea! Despite the president’s assurances, North Korea got the bomb and is now helping Iran with its nuclear development.

Because of Iran’s extremist mindset, the deal with Iran is far worse than the one with North Korea! An Iranian 11th-grade schoolbook quotes the late Ayatollah Ruhollah Khomeini:

I am decisively announcing to the whole world that if the world devourers wish to stand against our religion, we will stand against their whole world and will not cease until the annihilation of all of them! Either we all become free or we will go to the greater freedom, which is martyrdom. Either we shake one another’s hands in joy at the victory of Islam in the world, or all of us will turn to eternal life and martyrdom. In both cases, victory and success are ours.

Khomeini referred to the West as “world devourers”! Eighty-five percent of 81 million Shiites in Iran believe in Twelver Shiism, which Khomeini espoused. Death means nothing to them!

Former Israeli ambassador to the United Nations Dore Gold said that a nuclear Iran can’t be deterred like the Soviet Union was during the Cold War. The Iranians have a much more radical belief system. They think their savior—the 12th imam, or mahdi—will return sooner if they cause more apocalyptic chaos and violence.

As Dore Gold pointed out: “[A]nyone who says with confidence that the West can get used to nuclear Iran and rely on classic deterrence models has absolutely no idea what he is up against.”

The king of the north is led by Germany. America may let Iran get away with acts of war because of a broken will (Leviticus 26:19), but your Bible says that Germany will attack and destroy the king of the south! Germany already has Iran surrounded. (Download our free e-book Germany’s Secret Strategy to Destroy Iran for proof.)

What could enable Iran to push at Germany more than an arsenal of nuclear weapons? Iran relishes the thought of starting World War iii! As these two powers build toward confrontation, America, Britain and Judah are nowhere to be found in the Daniel 11 prophecy. The nations of Israel aren’t even in the picture. They will be helpless victims, not aggressors, in the coming war.

As world troubles escalate, God protects His Church from Satan’s vicious attacks (Revelation 12:13-14). The loyal remnant has an incredible future. “And they that be wise shall shine as the brightness of the firmament; and they that turn many to righteousness as the stars for ever and ever” (Daniel 12:3).

Worldwide nuclear conflagration is alarming, but it is also a sign of Jesus Christ’s return and the realization of our incredible human potential!