America’s policy of sanctions and military restraint means someone else will have to confront Iran. Bible prophecy shows whom it will be. 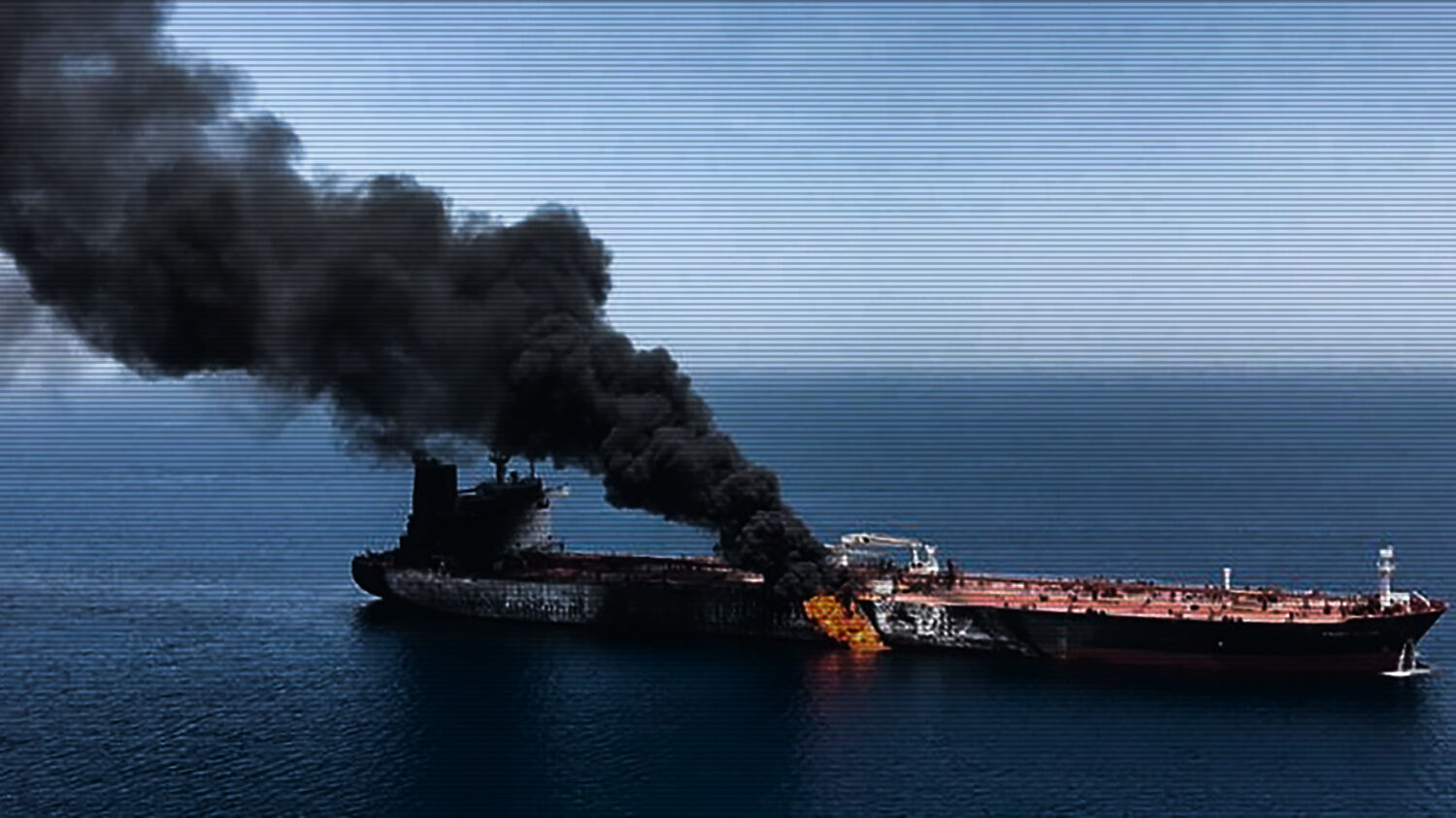 A picture obtained by AFP from Iranian News Agency ISNA on June 13, 2019 reportedly shows fire and smoke billowing from Norwegian owned Front Altair tanker said to have been attacked in the waters of the Gulf of Oman.
-/AFP/Getty Images

America’s policy of sanctions and military restraint means someone else will have to confront Iran. Bible prophecy shows whom it will be.

How bad does it have to get before the United States will respond militarily against Iran?

The result: Saudi oil output—which makes up 5 percent of the global output—was halved, and oil price surged 20 percent. This was the largest spike in oil prices in the past 30 years.

This brazen attack rattled the world.

Surely, most thought, there would be some reciprocal action by the United States.

Yet three weeks later, it seems we are no closer to an American response, other than increased financial sanctions on the regime.

It’s important to realize that the September 14 attacks were not an isolated event. They were just the latest in an escalating series of Iranian attacks that started in May. If there are no military repercussions for Iran’s outlandish strike, then its next attack could be even bolder.

Consider the dangerous trajectory of the following incidents:

Aerial footage shows one of the oil tankers targeted in the Sea of Oman#SeaofOman pic.twitter.com/mdvEPPT3J4

….On Monday they shot down an unmanned drone flying in International Waters. We were cocked & loaded to retaliate last night on 3 different sights when I asked, how many will die. 150 people, sir, was the answer from a General. 10 minutes before the strike I stopped it, not….

Then came the September 14 attacks.

After each of these attacks, the only response America offered was harsh rhetoric followed by more sanctions, rather than a strong military blow against the regime. According to Foreign Policy, Trump’s refusal to attack Iran after the June 20 assault was a point of major contention between dismissed foreign policy adviser John Bolton and the president. Bolton even implied that the September attack might not have happened had the president gone through with the retaliatory strike.

It is logical to expect another Iranian attack—soon and with greater impact.

If there are no military repercussions for Iran’s outlandish strike, then its next attack could be even bolder.

From the sequence detailed above, it seems the Iranian regime decided to move toward an even pushier foreign policy sometime in early May.

Instead of relying on its proxy forces to conduct its attacks, Iran is now using its official military. And instead of limiting its fight to the far-off dusty battlefields of Syria or Yemen, Iran is taking aim at the most volatile region on Earth: the oil-producing and shipping sector of the Persian Gulf.

This change of policy means that the Middle East is now a lot more dangerous.

Facing economic recession brought on by U.S. sanctions, Iran has upped the stakes. By increasing the power and scope of the attacks, Iran intends to either compel the U.S. to back down on the sanctions or to bait the U.S. into a Middle Eastern war.

Such a foreign war would be extremely unpopular in America and likely lead to President Trump’s downfall in the 2020 election. This means that Iran would only have to wait until 2021 for the predictable swing back to the sanction-free, Obama-era Iran policy. Hence why Iran would be happy with a limited war against the U.S. right now.

But the U.S. has not retaliated yet, showing it will not be easily drawn into a fight.

Some highly respected voices have said that Trump should wait out this Iranian temper tantrum. Eventually, some believe, the sanctions will have their desired effect. The hope is that by making Iran’s economy suffer, the regime will be compelled to moderate without committing U.S. forces to a new foreign war. Or even better, the financial hardship could cause the Iranian people to rise up in rebellion against the regime and bring about change from the inside. This is, of course, preferable to a U.S.-led regime change.

But it is also extremely unlikely.

The Iranian regime is very successful at crushing internal dissent. The establishment of the Islamic Revolutionary Guard Corps, a parallel military structure motivated by religious fervor and absolute loyalty to the ayatollah, means that the regime will not be overthrown easily.

Western leaders often fail to understand that the regime’s commitment to the Islamic revolution is absolute. For Iran, the preservation of the revolution is more important than the preservation of the nation. For Iran, going down swinging is not just an admirable outcome, it is one that ends in absolute glory. By attending to the Twelver Shia belief, Iran’s leadership follows the reasoning that it only has to cause a destructive war to bring back its version of the Messiah; it doesn’t have to win that war.

This means that the policy of maximum pressure will not be enough to chasten Iran. It also means that Iran will become more brazen and more destructive with its attacks as the sanctions take greater effect.

And eventually, it means that if America will not confront Iran’s violence by force, some other nation or group of nations must—nations whose interests are directly impacted by the increasing Iranian aggression.

The United States will not defeat Iran, but Bible prophecy says someone else will.

For over 25 years, we have alerted readers to a latter-day prophecy recorded by the Prophet Daniel. “And at the time of the end shall the king of the south push at him: and the king of the north shall come against him like a whirlwind, with chariots, and with horsemen, and with many ships; and he shall enter into the countries, and shall overflow and pass over” (Daniel 11:40). As we have proved, “the king of the south” is radical Islam, led by Iran. (For detailed proof, request your free copy of The King of the South, by Trumpet editor in chief Gerald Flurry.)

Notice that the king of the south pursues a pushy foreign policy against another king, “the king of the north,” which leads to an overwhelming show of superior force. As we have long stated, the king of the north is a soon-coming United States of Europe, led by Germany. (For more information, read our Trends article “Why the Trumpet Watches Europe’s Ongoing Unification Process.”)

Already, the increase of attacks is forcing Europe to take a firmer stance against Iran. On September 24, the Wall Street Journal acknowledged this fact in “Europe Turns to Trump on Iran.” The editorial board wrote, “President Trump has squabbled with his European counterparts over Iran since he left the 2015 nuclear deal. But the tactical disagreements have obscured how much Berlin, Paris and London agree with Washington about the Iranian threat. Now Tehran’s attack on the global oil supply finally has moved Europe toward the Trump position.”

In response to the September 14 attacks, Germany, France and the United Kingdom issued a rare joint statement blaming Iran for the attack. They also called on Iran to accept negotiations, not only of its nuclear and missile program, but also “issues related to regional security.” While this doesn’t sound like a forceful response, it is a change in European policy that indicates a shift in Europe’s thinking.

The United States will not defeat Iran, but Bible prophecy says someone else will.

Writing for Bloomberg, Bobby Ghosh noticed the same European change of course, writing: “[G]iven the regime’s penchant for escalating provocation, it was bound to test the limits of European sympathy, and then to go a step too far. That happened with the attacks on Saudi Arabia’s most important oil installations—which were in effect an assault on the world economy.”

As Iran continues to attack, watch for Europe to become more embittered. With the U.S. having a relative amount of oil independence, Europe will be more affected by Iran’s actions than America. In this dangerous situation, the seeds are being sown for the critical clash of Daniel 11:40.

For more understanding on this topic, please read our Trends article “Iran and Europe Heading for a Clash of Civilizations.”