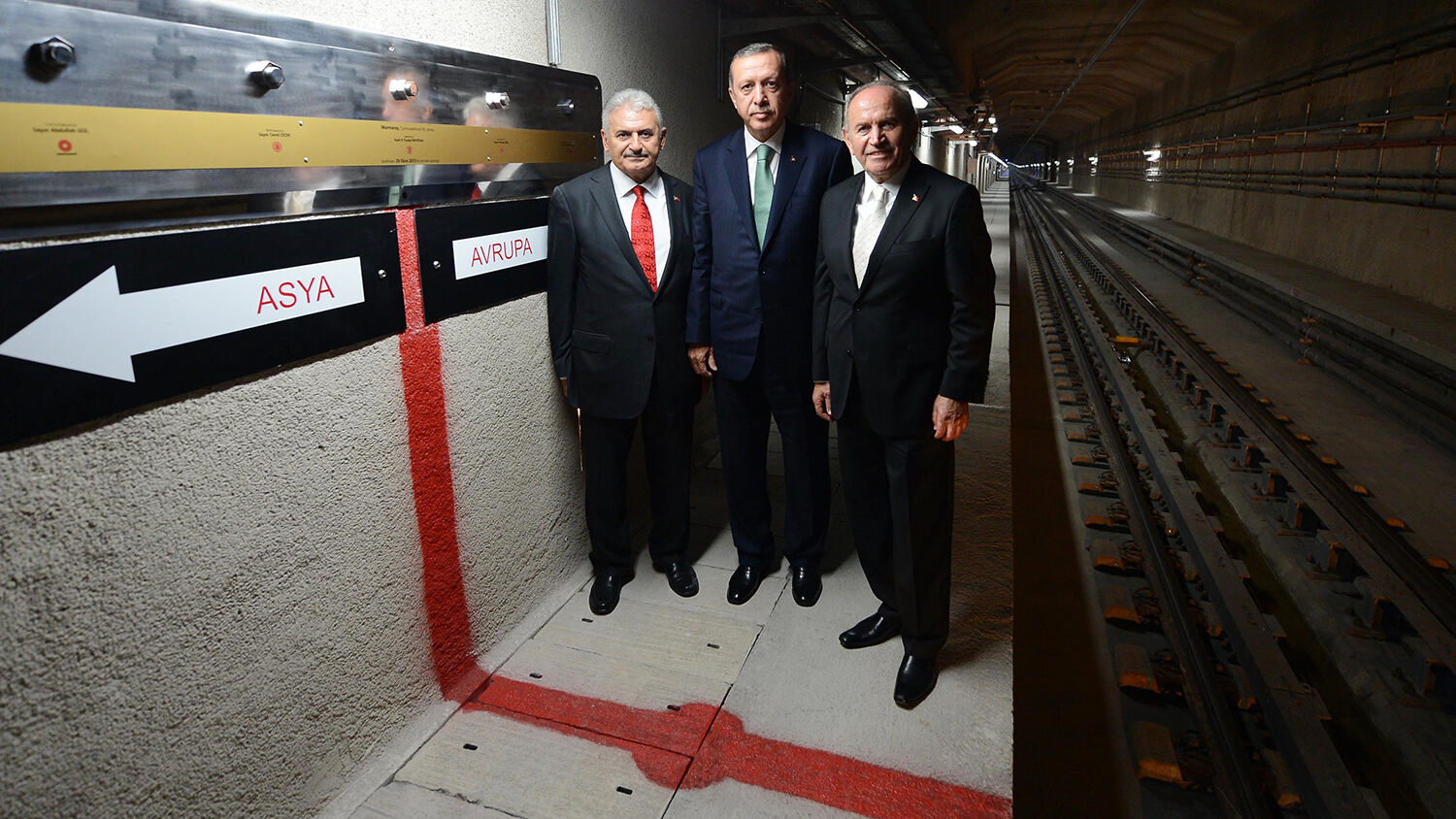 Turkish Prime Minister Recep Tayyip Erdoğan (center), Minister of Transport and Communications Binali Yildirim (left) and Mayor of Istanbul Kadir Topbas pose for a photo after the inauguration ceremony of the Marmaray on Oct. 29, 2013, in Istanbul, Turkey.
Photo by Kayhan Ozer/Anadolu Agency/Getty Images

The development ‘heralds a new era in international trade.’

A huge Chinese cargo train passed through the Marmaray Tunnel in Turkey last month on its way to Europe, marking the opening of an infrastructure project of geostrategic importance comparable to the Suez Canal.

The Marmaray Tunnel is 8.4 miles long and runs undersea, beneath the Bosporus Strait, linking the Asian part of Istanbul to the European side. The tunnel, built by a Turkish-Japanese consortium starting in 2004, is the world’s deepest undersea immersed tube tunnel. The marvel of engineering opened to passenger traffic in 2013. But it remained disconnected from the rail network until last month, at which time the train originating in Xi’an, China, transited the tunnel en route to the Czech Republic.

“[I]t will be remembered as the first freight train to pass from China across central Asia and under the Bosporus Strait, using the Marmaray tunnel,” Geoffrey Aronson, chairman and cofounder of the Mortons Group, wrote for the American Conservative on December 6.

The Chinese are branding the tunnel crossing as a victory for their Belt and Road Initiative (bri), a project aiming to rebuild the ancient Silk Road trade routes by enhancing connectivity and transport infrastructure along the thousands of miles between China and Europe. A central component of the bri is the Trans-Asian Railway, which the Marmaray Tunnel connects to and which is often called the “Iron Silk Road.”

Aronson called the tunnel and connecting railways the “Suez Canal of our era.” He wrote: “Like the Suez Canal in its day, this ‘Iron Silk Road’ through central Asia is a time saver, with the added bonus of circumventing sea routes now controlled by the West.”

Truly historic moments; As part of the “Belt and Road Initiative” the first freight train departed from China en route Europe ever passing under bosphorus through the Marmaray tunnel.

The route reduces the locomotive travel time between China and western Turkey from 30 to 12 days. Trains traveling from Xi’an, China to the Czech Republic now require 18 days, which Aronson says is “half the time of a similar journey by sea and at similar cost.”

Hu Heping, secretary general of the Chinese Communist Party’s Shaanxi Provincial Committee, traveled to Turkey for the landmark event. “We are witnessing a historic moment,” he said. “This journey will contribute immensely to the development of commercial and economic relations between Asia and Europe.”

With the “Iron Silk Road” and hundreds of bri initiatives in more than 60 nations, China is reorienting the world economy. And its progress on this front takes on extraordinary significance when viewed through the lens of Bible prophecy.

More than 2,500 years ago, God inspired the Prophet Isaiah to write about a mighty trade bloc that would be formed in our lifetimes, which he called a “mart of nations” (Isaiah 23:3).

One of the main players in the “mart of nations” will be a power Isaiah refers to as Chittim, an ancient name for modern-day China. Also in a lead role will be Tyre, a city that signifies the commercial center of modern Europe.

Isaiah 23 and Ezekiel 27 show that these two economic behemoths, along with Japan, Russia and others, will collectively control global commerce for a short time. Deuteronomy 28:52 makes clear that this trade partnership will operate to the detriment of American and British power.

Trumpet editor in chief Gerald Flurry explains the details of this economic “mart” in his free booklet Isaiah’s End-Time Vision:

Instead, it is clear that Asian nations, such as China, will assist the Europeans in carrying out the attack.

The significance of China’s Belt and Road Initiative which better connects it to Europe—including the new “Iron Silk Road” through the Marmaray Tunnel—is revealed in these Bible prophecies.

China’s increasing economic, political and military power points to chaotic times ahead for the U.S. and some of its allies. But the chaotic future will be immediately followed by the most peaceful era in mankind’s history. Mr. Flurry writes: “[W]hat a dynamic market of nations it is. All of them are going to besiege America, Britain and the Jewish nation. … But that trading partnership won’t last long. Soon they will clash, just before Jesus Christ returns and destroys both of them” (ibid).

To understand the true significance of the rise of China and how it ties into Christ’s return, order your free copy of Mr. Flurry’s booklet Isaiah’s End-Time Vision.