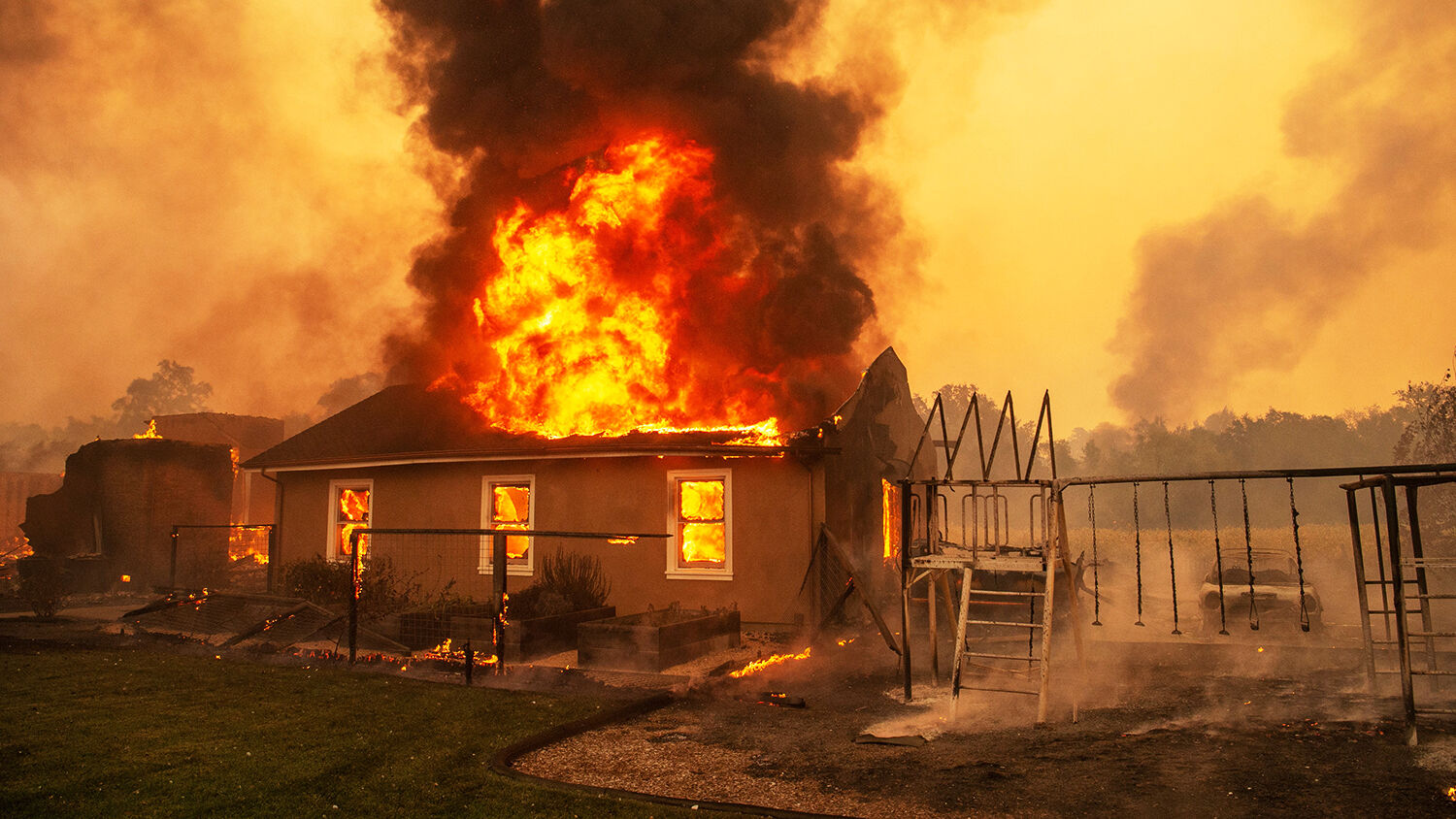 A home burns at a vineyard during the Kincade fire near Geyserville, California, on October 24.
JOSH EDELSON/AFP via Getty Images

‘This seems to be the new normal in California.’

Altogether, 17 wildfires are now actively burning in California, including those in Grass Valley, Sylmar, Mount Diablo, Calabasas, Contra Costa and near Calpella in Mendocino County. The Tick Fire near Santa Clarita has been mostly contained in recent days by efforts of 1,000 firefighters. But for dozens of the area’s residents, it was too late. The damage was done. Their homes were burned to ashes.

The most destructive wildfire currently blazing is the Kincade in Sonoma County. It has scorched more than 75,400 acres, thanks largely to winds over the weekend that reached almost 100 miles per hour, while the relative humidity dropped.

Ross Hull, a meteorologist for Global News, explained on October 28 how these various factors combined to make blowtorch-like conditions. “We’re talking hurricane-force winds,” Hull said. “And wind just throws oxygen onto a fire. When you have dry conditions, and you have the low relative humidity, and you have these strong winds moving in, you have the right recipe for disaster!”

At times, the Kincade Fire has grown at a rate of one football field every three seconds. Around 180,000 people so far have been displaced by its devastation. This includes residents of Santa Rosa and tourists and homeowners around the wine capital of Healdsburg, where the historic Soda Rock Winery was burned to rubble. The evacuation zone also included two hospitals, which promptly shut down and sent hundreds of patients to other facilities.

It adds up to what the Sonoma County Sheriff’s Office said is “the largest evacuation” anyone in their offices “can remember.”

Approx 180,000 people under evacuation order due to #KincadeFire. This is the largest evacuation that any of us at the Sheriff’s Office can remember. Take care of each other.

CALIFORNIA WILDFIRES UPDATE: Officials say the wildfires could tentatively be contained November 7 — but it could take “weeks if not months” for all flames to be extinguished https://t.co/K6XOdekkaS pic.twitter.com/YI45NU97pl

Some 3,000 firefighters are battling Kincade. But it is only 5 percent contained, down from 10 percent over the weekend. Officials say the best-case scenario is that the fire will be completely extinguished by November 7.

Meanwhile, on Monday—as Kincade and other California fires were blazing—a new conflagration broke out on the west side of the 405 Freeway. Known as the Getty Fire, the blaze is burning homes in the most exclusive parts of West L.A. hillside areas, such as Brentwood and its Mountaingate community, known for their celebrities and multimillion-dollar estates.

Man these LA aren’t no joke. Had to emergency evacuate my house and I’ve been driving around with my family trying to get rooms. No luck so far! ‍♂️

Getty along with other blazes is “seriously polluting the skies across the state” and rendering the air quality “dreadful,” Los Angeles County resident Richard Weston told the Trumpet on October 30.

Smoke from the Glencove fire in Vallejo, Calif., clouds the Carquinez Bridge.(California Department of Transportation) pic.twitter.com/VpuTSb5pfu

The carnage is particularly agonizing for Californians in regions still recovering from devastating wildfires that swept through in 2017 and 2018, destroying more than 27,000 buildings and killing 150 people.

At present, people across the Golden State are also enduring widespread controlled power outages related to the fires. Altogether, around 2.7 million Californians are losing electricity as the infernos rage through the state and as power companies try to prevent their lines and equipment from igniting new blazes in the dry, windy conditions.

Sylmar resident Oscar Mancillas told Agence France-Presse that the Saddleridge Fire in his area would have been considerably worse had it not been for the fact that much of the vegetation “didn’t really grow back from the last fire.” He said many Californians are baffled by the destruction that is pounding the state with increasing intensity and frequency. “This seems to be the new normal in California,” he said. “You have to be earthquake ready. You have to be fire ready. For those of us that have a family, it’s a little daunting sometimes.”

For decades, one disaster after another has slammed the Golden State, establishing this “daunting” and heartrending “new normal.” And the Trumpet has been carefully monitoring the trend. In 1993, Trumpet editor in chief Gerald Flurry wrote: “These deadly disasters are repeatedly labeled the ‘worst ever’! … With all the disasters that have struck California the past few years, it’s as if the state is under a curse.”

After almost 15 more years of the Golden State being pummeled by more and more disasters, Mr. Flurry wrote on the topic again. In an Oct. 24, 2007, piece titled “California Disasters Continue—Why?”, he examined biblical teachings that show California is being cursed.

He discussed the 28th chapter in the biblical book of Deuteronomy. This chapter addresses end-time Israel, referring primarily to the present-day nations of America and Britain. The text explains that if these nations obey God, they will be blessed. If they reject Him and His law, they will be cursed. “[I]f thou wilt not hearken unto the voice of the Lord thy God, to observe to do all his commandments and his statutes,” verse 15 states, “all these curses shall come upon thee, and overtake thee.”

In a January 2018 article, theTrumpet.com’s managing editor Brad Macdonald placed California disasters in the context of this passage:

In Mr. Flurry’s 2007 article, he explained that the main reason California in particular is suffering these prophesied curses is not only because of the state’s culture of extreme and prideful lawlessness, but also because of California’s history with God and His Church. The Worldwide Church of God was headquartered in Pasadena since the mid-20th century; but in 1979, the state’s attorney general launched a massive and ill-founded lawsuit against it. Mr. Flurry wrote that this made California the only U.S. state that ever directly attacked the Church. He wrote: “Actually, it attacked a lot more than that. California really attacked the living God.”

California has an astounding history with God and His Church. It began as an extraordinary blessing and opportunity for the state, but ended with California openly rejecting God. Mr. Flurry explained that this is at the heart of why California is suffering ongoing wildfires and so many other catastrophes.

To understand more about this sobering reality, and to learn about the only way the curses will end, study Mr. Flurry’s article “California Disasters Continue—Why?”