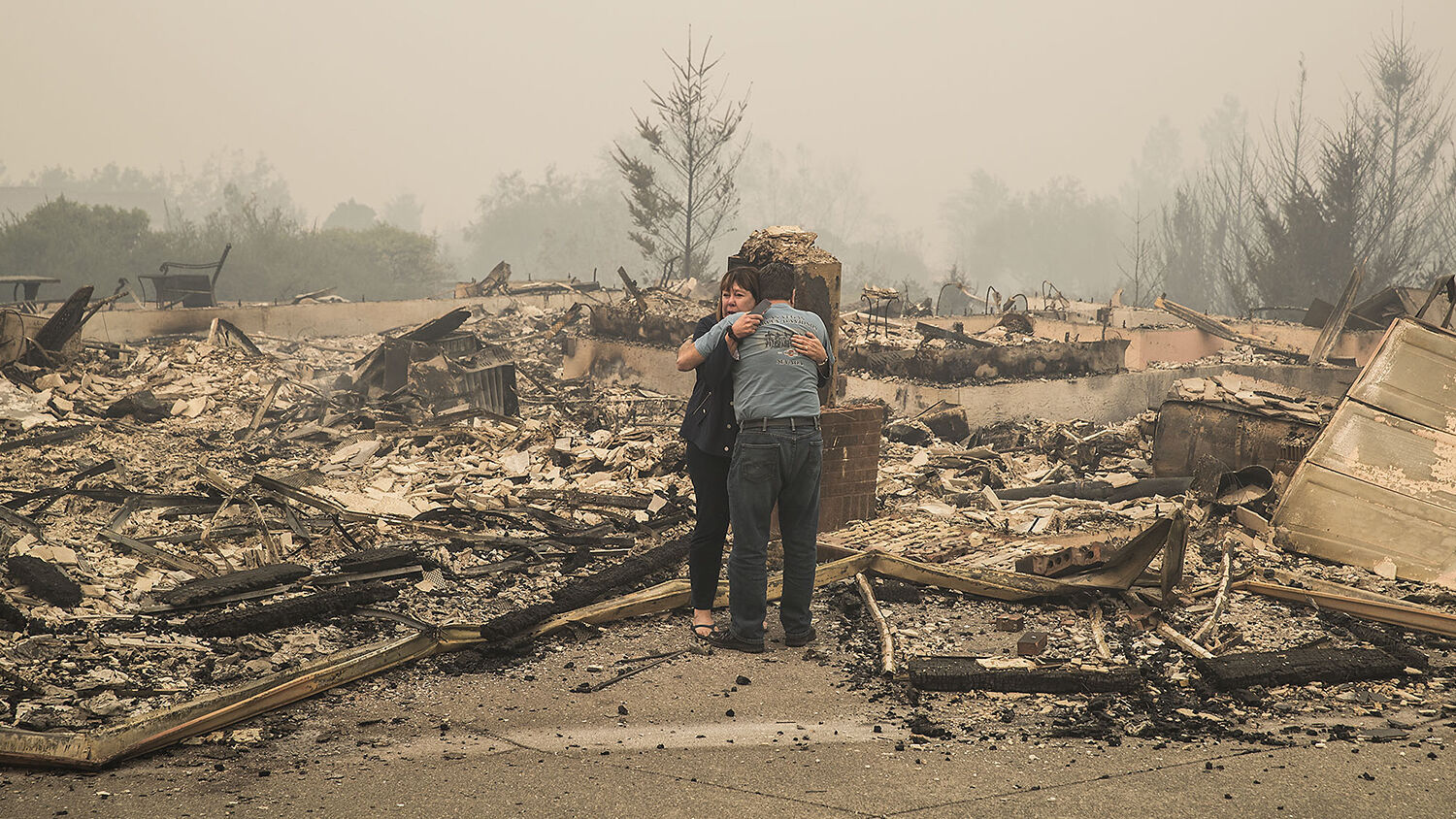 A couple mourn after seeing the remnants of their Fountaingrove home of 10 years, completely destroyed in the Monday morning inferno of Oct. 10, 2017, in Santa Rosa, California.
Brian van der Brug/Los Angeles Times via Getty Images

On Monday night, California resident Berkeley Johnson was outside cleaning drains when he heard a foreboding sound. “I heard the rumbling of the rocks and I looked up, and the river and the trees were coming down,” he said. Berkeley grabbed his wife and scrambled onto the roof of their home. Seconds later, a wave of mud and boulders smashed through the doors and windows.

After the mudslide, the Johnsons climbed down and began assessing the damage. And that’s when they heard it, emanating from the vicinity of their neighbors’ garage: the anguished cry of a baby trapped beneath four feet of mud. Berkeley dug. “We don’t know where it came from, but we got it out, got the mud out of its mouth,” he later recalled, his voice choking with emotion.

Perhaps you’ve heard that Southern California this week is experiencing terrible flooding and mudslides. Whenever a catastrophe like this happens, it’s easy to simply note the particulars and move on, not giving much thought to the human suffering. For me, it was when Johnson said, “We don’t know where [the baby] came from.” Imagine a sleeping toddler swept from its crib (and family), carried away violently, and eventually deposited in an unfamiliar place under four feet of cold, wet mud.

This is California. One month it’s drought and massive wildfires; the next it’s torrential rain, flooding and mudslides. Peppered in between are crises like the Oroville Dam crisis, enduring drug and crime problems, and debilitating debt. Meanwhile, the tectonic plates beneath the state continue to creak and groan, hinting disconcertingly that another massive earthquake is imminent.

With each crisis, one question comes further into focus: Is California cursed?

A strong case can be made proving that California’s demise began in the late 1980s. On Oct. 17, 1989, a massive earthquake rattled Northern California. The Loma Prieta quake caused 63 deaths, more than 3,500 injuries, and billions of dollars’ worth of damage. It occurred during Game 3 of a World Series that, interestingly, was between two California teams. The game (and earthquake) was broadcasted live to millions of Americans.

In a sense, the “World Series earthquake” was a sign to the nation of the disasters, tumult and suffering that was to become routine in California over the next 30 years. It was a national sign that California was cursed. In May 1992, Los Angeles erupted in the worst riots in United States history. On Jan. 17, 1994, the Northridge earthquake killed 60 people, injured 9,000, and inflicted $20 billion worth of damage on Southern California. Both of these crises were “historic.”

Since the late 1980s, California has experienced one colossal—in many cases, “historic”—crisis after another: floods, drought, wildfires, mudslides, mass shootings, economic crisis, protests and riots. Exactly one month ago we published an article on California’s historic wildfires, the worst in state history. In 2017, nearly 9,000 fires burned 1.2 million acres of California, destroying more than 10,000 structures and impacting tens of thousands of people.

As the wildfires raged, it was common to hear people—average, nonreligious people—discussing the fires in apocalyptic terms. Many seriously wondered if the fires were a sign from God, or a sign that the world was about to end. But now that the fires have died down, most people have moved on. California’s apocalypse, many believe, is over (unless you live in Southern California).

Sadly, if the history of the past 30 years is any indication, it’s only a matter of time before the next “historic” crisis strikes. And when it does, journalists and politicians—and many anxious, fearful people—will once again return to talking about the apocalypse. The same question will yet again come into focus: Is California cursed?

You need to answer this question, and I believe we can help you do this.

Since its inception, the Trumpet has kept a keen eye on events in California. (The Trumpet sprang from an incident that occurred in Pasadena, California, on Dec. 7, 1989. You can read more about this fascinating history here.) In December 1993, Trumpet editor in chief Gerald Flurry wrote: “One disaster after another is striking California. These deadly disasters are repeatedly labeled the ‘worst ever’! … With all the disasters that have struck California the past few years, it’s as if the state is under a curse.”

Ten years later, after witnessing California endure crisis after crisis, Mr. Flurry wrote “Is California Under a Curse?” This article gives an in-depth, biblical answer to this question. (If it’s a choice between continuing to read this article or reading Mr. Flurry’s article, I encourage you to read Mr. Flurry’s piece.) You need to learn the answer to this question, and soon. It wouldn’t be a surprise if California was pummeled again really soon; maybe even around January 16 or 17? (the anniversary of the death of Herbert W. Armstrong).

In his article, Mr. Flurry referenced Deuteronomy 28. This passage explains a fundamental biblical principle: The obedient are blessed, and the disobedient are cursed. Verse 15 says: “But it shall come to pass, if thou wilt not hearken unto the voice of the Lord thy God, to observe to do all his commandments and his statutes [then] all these CURSES shall come upon thee ….”

Deuteronomy 28 applies to the end time, and Moses is addressing Britain and America in particular. (You can prove this by studying The United States and Britain in Prophecy, by Herbert W. Armstrong.) But notice the nature of the curses: “Cursed shalt thou be in the city, and cursed shalt thou be in the field. Cursed shall be thy basket and thy store. Cursed shall be the fruit of thy body, and the fruit of thy land, the increase of thy kine, and the flocks of thy sheep. Cursed shalt thou be when thou comest in, and cursed shalt thou be when thou goest out. The Lord shall send upon thee cursing, vexation, and rebuke, in all that thou settest thine hand unto for to do, until thou be destroyed, and until thou perish quickly; because of the wickedness of thy doings, WHEREBY THOU HAST FORSAKEN ME” (verses 16-20).

To really answer the question, one must understand California’s history with God and His Church. Mr. Flurry focused on this history in his article. California, he explained, is the only state that has ever attacked God’s Work. “Actually, it attacked a lot more than that,” he wrote. “California really ATTACKED THE LIVING GOD!”

That’s not hyperbole; California has more history with God and His Church than any other American state. To understand why California suffers the way it does, you must understand that God did something unique, special and wonderful with California, and that the state of California rejected this opportunity and became openly hostile to God. Here’s the article again; please read it: “Is California Under a Curse?”

In the meantime, we sadly await the next curse.