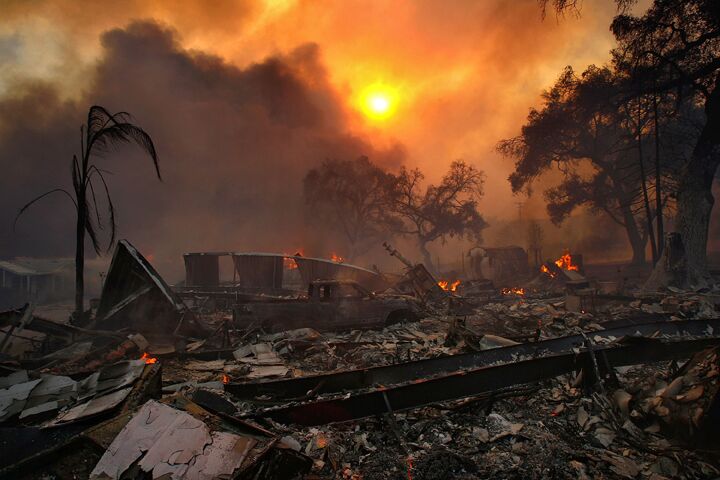 Catastrophic wildfires, multi-year droughts, out-of-control deficits. Why is this happening to the Golden State? The answer will surprise you.

Wildfires raged out of control in Southern California for the third day Tuesday. With over a dozen fires burning, an estimated 1 million residents have been forced to flee their homes and two people have been killed. From mountains to coastline, more than 1,300 houses have gone up in flames, and Associated Press reports that “the destruction may only be the start for the region” (October 23).

“Faced with unrelenting winds whipping wildfires into a frenzy across Southern California, firefighters all but conceded defeat Tuesday,” reported AP (ibid.). In three days, the fires have burned more than 373,000 acres and prompted one of the biggest evacuations in California’s history. More than a third of a million households were ordered to evacuate in one county alone. President Bush has declared a federal emergency for seven counties.

These wildfires follow a devastating summer last year for California as well. A searing heat wave destroyed or badly damaged many California crops. The heat caused some of the crops to ripen early. Then the early crops caused a labor shortage, which intensified the disaster. California dairy farmers witnessed thousands of their cows die. They had to bury cows by the hundreds in mass graves. The industry was decimated.

Much of the United States has been suffering from abnormally dry or drought conditions, and other weather disasters. However, at this point, California appears to be suffering most of all.

This state often leads the way in U.S. disasters. Is there a reason? There is a mind-staggering hope embedded in California’s catastrophes. Nothing is more important for you to understand.

I wrote this about some California crises in our December 2003 Trumpet magazine:

Multi-year droughts, catastrophic wildfires, out-of-control deficits. Why is this happening to the Golden State? The answer will surprise you.California has just experienced another crisis. It has just seen its biggest outbreak of wildfire—it broke all past records. Some 750,000 acres were burned, about 3,600 homes destroyed and 20 lives lost.Here is what U.S.News & World Report wrote about it: “Throughout the American West, trees already short of nutrients because of crowding are suffering from a four-year-old drought, the worst in 300 years. Bark beetles have attacked the weakened trees across much of the West, killing up to 70 percent of them in some areas. In San Bernardino National Forest, beetles have ravaged half a million acres so far. When fire does break out, the crowding allows flames to leap treetop to treetop in a fast-moving crown fire, as happened in parts of Southern California last week” (Nov. 10, [2003,] emphasis mine).California had a six-year drought at the end of the 1980s. Now it has suffered through another multi-year drought.That state also has a $38 billion deficit, the worst of any state in the United States. It cost a governor his job.What is happening in California?

A decade earlier, in December 1993, I wrote this in a Trumpet article:

One disaster after another is striking California. These deadly disasters are repeatedly labeled the “worst ever”! … With all the disasters that have struck California the past few years, it’s as if the state is under a curse.The recent fires in Southern California were their worst ever. One lady said, “[I]t was like the wrath of God.” …These fires revealed an even greater crisis. Reports say 20 of the 26 fires were set by arsonists! The Los Angeles area is seething with all kinds of hatred—which is only a microcosm of the entire nation. In many areas of the U.S., racial hatred is ready to explode like the Southern California firestorm. And we no longer have the will to implement the strong government action that is needed! …The Rodney King and Reginald Denny trials … inflamed racial tension. The 1992 Los Angeles race riots were that city’s worst ever. They were some of the deadliest riots in U.S. history! Others fear riots will also occur in their cities. [That is a justifiable fear.]In 1991, wildfires in Oakland, California, destroyed 2,900 structures, and 25 people died from the fires. These fires were the worst ever in California! The state is now struggling with a budget deficit that is the worst ever—by far—that any American state has faced!A six-year drought ended in 1991. It was the worst ever in California! That drought was followed by heavy rains and flooding which caused the heavy growth of grass, shrubbery and weeds that led to the dangerous fires.

Why is all this happening to California? I believe we must look more directly to the spiritual.

In an overt attack against Herbert W. Armstrong, in 1979 the state of California, through the attorney general’s office, launched a massive lawsuit against the Worldwide Church of God (from which the Philadelphia Church of God came). On January 3, that office initiated a sudden, armed assault on the Pasadena headquarters, in an attempt to claim ownership of the Church’s property and assets as well as its continuing income—in violation of the U.S. Constitution. A receiver, secretly appointed by the court, tried to take over and operate God’s Church. Completely false, outrageous and baseless allegations of financial mismanagement were made—despite financial and all other required records having been regularly and voluntarily filed. No evidence of wrongdoing was ever found, and on Oct. 15, 1980, the attorney general dropped all charges and dismissed the case. Later, the higher appellate court ruled that the lawsuit was without foundation.

California is the only state that ever attacked Mr. Armstrong and his work. Actually, it attacked a lot more than that. California really attacked the living God! It also attacked its only hope—a hope beyond what mankind can even imagine!

Could such an unjustified attack by the state have anything to do with California’s problems in the last several years? It certainly does, and you need to know why.

Write for a free copy of Mr. Armstrong’s book Mystery of the Ages to better understand why there is a strong connection between the state’s attack and California’s many disasters.

This book will show you why California is only leading the American and British peoples into more disasters, unless our peoples change their way of life. Mr. Armstrong’s book will show you how to avoid many dreadful events. But even if we don’t heed, out of these catastrophes will rise mankind’s most inspiring hope ever!