When the world is under righteous government, weapons of death will be converted into tools of life. 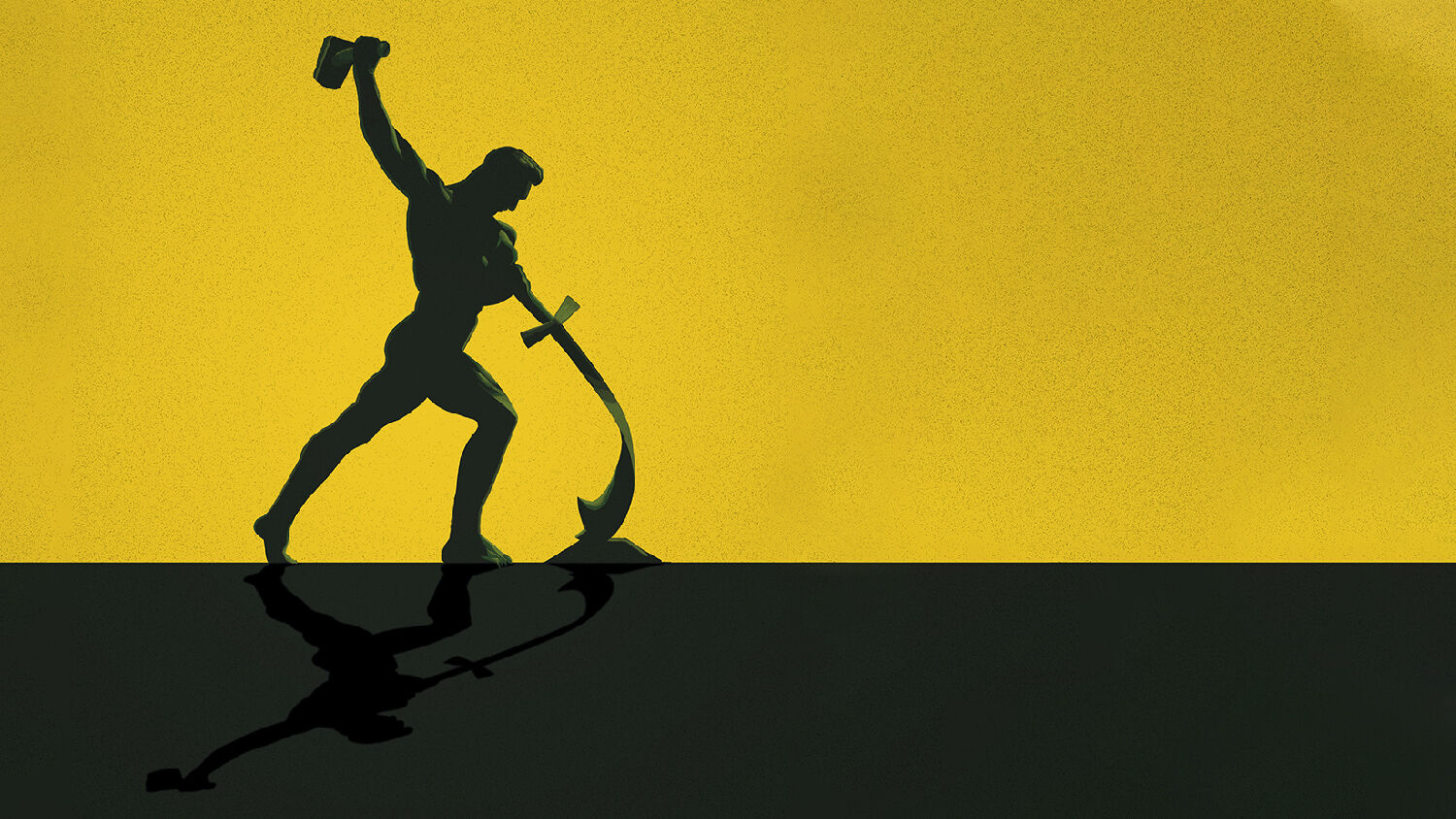 When the world is under righteous government, weapons of death will be converted into tools of life.

“What couldn’t the F-4 Phantom do?” So headlined Air & Space Magazine in a tribute to the fighter jet that featured heavily in the United States’ fight against Communist forces during the Vietnam War. F-4s at that time, it says, “were the hottest fighter on Earth.”

One feature adding to the heat was not as game-changing as its J79 engines or its Westinghouse radar, but it enabled the F-4 to fly longer missions. It was an extra fuel tank: An aluminum, 600-gallon, centerline tank, with the front coming to an aerodynamic point. And since it was “extra,” after being emptied—or if a pilot suddenly needed increased maneuverability—the missile-shaped tank would be jettisoned and the aircraft would fly on.

From the first F-4 sortie in 1964 to the war’s end in 1975, the Aviationist says, “several thousand drop tanks were jettisoned.” In another country, these tanks might have been left to corrode in the jungles where they had crash-landed. But Vietnamese fishermen saw an opportunity in them.

Listen to the episode of The Sun Also Rises about this inspiring topic:

Some tanks were too crumpled from the drop to be of use, but those that remained intact, the fishermen would haul to their villages. They would slice each one lengthwise, bend the remaining section further open and insert wooden thwarts to hold the shape. They would then add a small engine on the back, and viola: a fully functional, remarkably lightweight and durable fishing canoe.

In some Vietnamese river systems today, there are hundreds and hundreds of these fishing canoes still in use. In the mornings, fishermen load into what was designed as part of a weapon to annihilate people, and they return in the afternoon with a catch to feed to their families and sell in local markets. They turned “swords” of the sky into “plowshares” of the river.

Tanks for the Help

Following the collapse of the Soviet Union in the early 1990s, farmers in Ternopillya, Ukraine, were suddenly free from the Communist yoke and eager to boost agricultural productivity of their farms. But they had limited funds available for new machinery.

Meanwhile, since the Cold War had suddenly ended, the government found itself with a surplus of tanks on its hands. And it was willing to sell them at bargain bin rates. It didn’t take long for the Ukrainians to see that each of these two problems could solve the other.

The bbc reported that the first Soviet tank was sold to farmers “for a third the price of a tractor.” They then set to work converting it from a weapon of war into a tool of the field. They removed the tank’s barrel and welded a massive bulldozer blade in its place. They then attached a large plow to the back. The result was a versatile and powerful tractor. Ukraine’s Novyy Kanal discussed the vehicle’s year-round usefulness, writing: “In spring, the tank tills the soil, in autumn it plows, and in winter it clears away the snow.”

Following the success of that first tank-turned-tractor, other Ternopillyan farmers followed suit. The bbc writes that “about 50 tanks”—designed to kill people—were converted for “agricultural use”—into tools used to feed people.

From Artillery to Cutlery

During the Second Taiwan Strait Crisis of 1958, Communist China fired some 450,000 shells at Taiwan. After a monthlong conflict, the Chinese realized that they were unlikely to conquer the Taiwanese with just military force. So they tried a new tactic. They began removing the high explosive from each shell and replacing it with a propaganda leaflet. When these shells landed on Taiwan, instead of exploding into tiny fragments, they remained mostly intact. The Chinese hoped the Taiwanese would find and read the messages inside and then be convinced of the superiority of the Communist system and willing to submit to China.

In the end, the propaganda bombardment did not give the Taiwanese confidence in the Communist system. But it did give them something else. “Bombing of the island,” the Taipei Times wrote, “provided quality steel that literally dropped from the sky.”

A company called Maestro Wu built a world-class business around collecting these large shells, placing them in forges until red-hot, and then hammering them into useful tools. The company originally used the steel to build plows and other farming equipment, but has more recently focused on making high-end cutlery.

From a single Chinese artillery shell, Maestro Wu can make about 60 cooking and eating utensils. Their cutlery has found its way into top hotels and restaurants in Taiwan and around the world, where it is used daily to prepare, serve and eat delicious food.

An Eyedropper on a Forest Fire

These initiatives are intriguing, but they are small, isolated and have made no discernible dent in the world’s immense stockpiles of weapons. Around the globe today are an estimated 875 million firearms, 90,000 tanks and 14,485 of the most devastating weapons man has ever built: nuclear warheads.

A report published in April by the Stockholm International Peace Research Institute shows that global military spending rose last year to $1.8 trillion. That’s the highest level in real terms since dependable record-keeping started in 1988. In an analysis of this report, the Economist wrote: “The world is arming itself to the teeth.”

Having been born into a world armed “to the teeth,” we might feel unmoved by the near ubiquity of weapons. But these devices are built to tear human flesh in order to maim or kill. If you consider that reality from a higher perspective, it emerges as a profoundly perverse concept.

The Bible shows that our Creator wishes for people to help and love each other as much as we love ourselves. This is made clear in Luke 10:25-37, 1 John 4 and 1 Corinthians 13. In Matthew 7:12, Jesus Christ says teaching people to love one another is among the Bible’s most fundamental purposes.

Instead, mankind devotes vast amounts of money, time and resources to build weapons meant to do the opposite. And the Scriptures show that in the near future, these vast stockpiles—including our nuclear weapons—will be used. Matthew 24:21-22 quote Christ saying mankind will soon suffer a time of “greater anguish than at any time since the world began,” and so great that unless it is shortened, “not a single person will survive” (New Living Translation).

This could only be describing a worldwide nuclear war with enough detonations to create nuclear winter. It will threaten to end every human life.

He won’t stop with just ending the carnage. He will go on to build a world of true peace.

A disturbing prophecy in Joel 3:9-10 shows that even the staggering number of weapons in the world today will not be enough for the people on whom this mortifying Third World War falls. As the violence spreads, directly touching the life of every person, survivors will hastily convert their agricultural tools into weaponry. This will be history’s darkest instance of total war.

But the prophecies do not end with war wiping out all human life. Continuing the passage in Matthew 24, just after Christ said the war will be so devastating that it could end all human life, He added an important detail: “But it will be shortened” (nlt).

Nuclear World War iii will be cut short! Before the nations use their weapons to obliterate mankind, Jesus Christ will return and interrupt the violence. And He won’t stop with just ending the carnage. He will go on to build a world of true peace. The late educator Herbert W. Armstrong famously called this future age the “World Tomorrow.”

In his booklet The Wonderful World Tomorrow—What It Will Be Like, Mr. Armstrong proved that during this future era, Christ will use the Holy Spirit and God’s law and government to convert the peoples of the world from war-mongering to peace-loving. And He will also orchestrate a parallel worldwide project to convert weapons into peaceful tools.

Notice this breathtaking passage in Isaiah 2:2-4: “[A]ll nations … shall beat their swords into plowshares, and their spears into pruninghooks ….”

Under God’s righteous rule, the peoples of the world will not just destroy all the killing devices or bury them somewhere. Instead they will be upcycled! Beating a sword into a plowshare means taking a weapon designed to slice people open, and converting it into a tool to slice the earth open—so the soil can be planted and harvested, and yield food that boosts people’s well-being.

The twisted transmutation of tools into weapons described in Joel 3 will be reversed. And other weapons will likewise be transformed into tools that give people more abundant lives. It will no longer happen just in a few small and isolated instances, such as those in Vietnam, Ukraine and Taiwan. Instead this swords-to-plowshares project will be a globe-girdling enterprise. Isaiah 2:4 continues: “[N]ation shall not lift up sword against nation, neither shall they learn war any more.”

Mr. Armstrong concluded his booklet about this soon-coming age of harmony with these hope-saturated words: “People will start living God’s way—the way of outgoing concern for others—the way of the true values—the way of peace, of happiness, of well-being, of joy. … What a fabulous picture!”

The Wonderful World Tomorrow—What It Will Be Like
You don’t have to believe it! It will happen, regardless. It is sure—the world’s only sure hope. This advance good news of tomorrow is as certain as the rising of tomorrow’s sun. Humanity won’t bring it about—it is going to be done to us. Humanity is going to be forced to be happy—to enjoy world peace—to see universal abundance and joy fill the Earth.
From The October 2019 Philadelphia Trumpet
View Issue FREE Subscription
Next
Previous