Hint: It has to do with oil, and it nearly worked in World War II 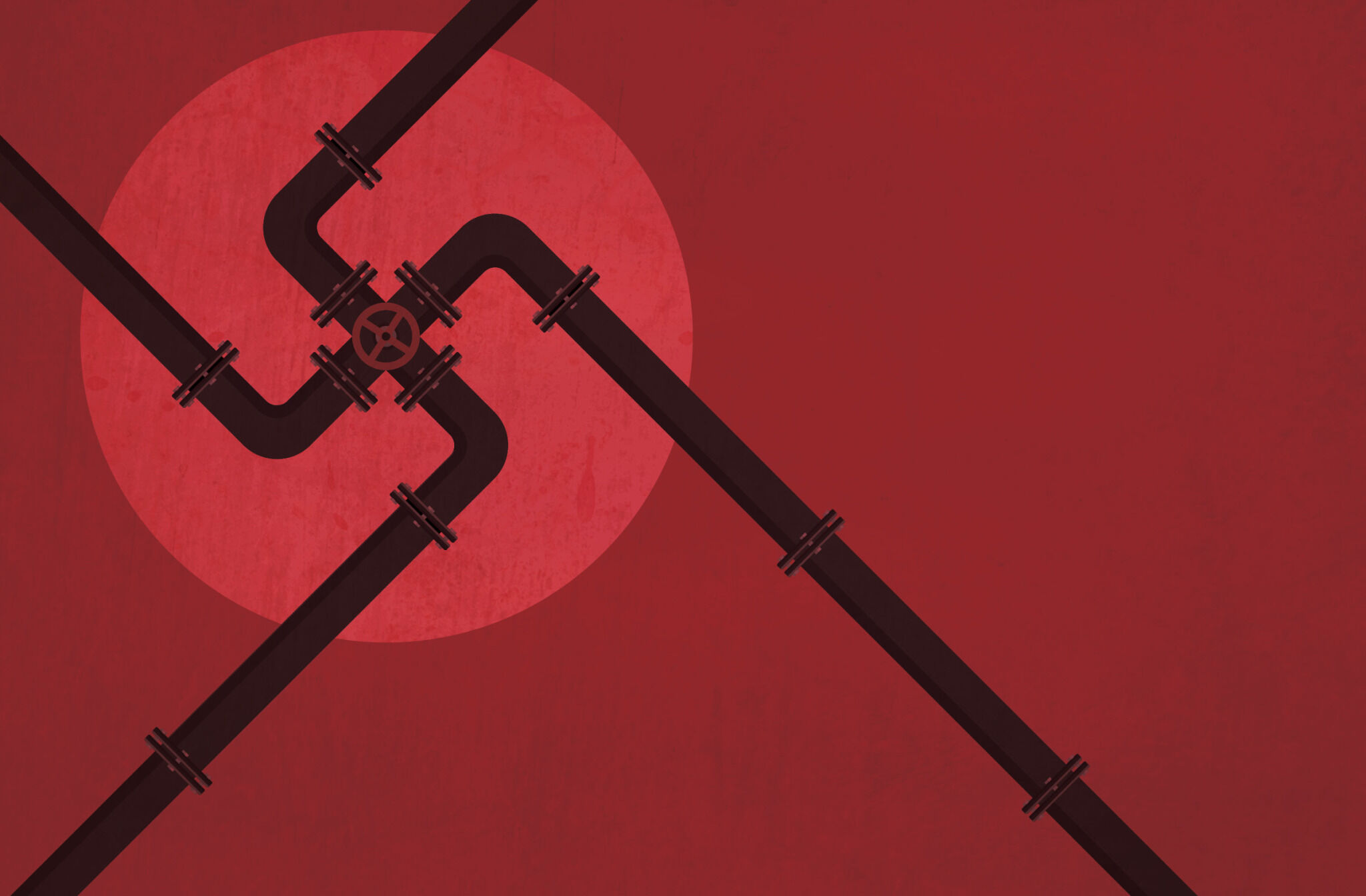 Hint: It has to do with oil, and it nearly worked in World War II

Imagine living under a totalitarian political party. It surveils and controls every aspect of society: the courts, the media, your finances, your healthcare, your beliefs. Parents are afraid their children will report them to the secret police for conversations held around the dinner table. People who are merely suspected of disagreeing with the party have suddenly disappeared. People are reeducated, enslaved, sterilized and even killed for belonging to a race or ethnic group that the party has declared inferior.

You would be living in this world if Germany won World War ii.

Germany’s original strategy for the conflict was to conquer and subjugate Western Europe, then betray and defeat the Soviet Union. It would then create a United States of Europe under German domination that would occupy at least half of the Soviet Union before declaring an armistice. The Nazis had plans to enslave every able-bodied British man between the ages of 17 and 45 and ship them to slave labor camps in continental Europe. They planned to use the postwar period to build wealth and power, in large part by colonizing Africa.

But as Europe, Germany and the Nazis grew increasingly powerful from their subjected and enslaved victims, they would prepare for more war. Adolf Hitler publicly declared that an invasion of the United States would be “as fantastic as an invasion of the moon”—but Hitler declared a lot of things. His scientists actually designed a long-range bomber called the Amerikabomber to conquer New York City. Weapons like this would have rapidly become reality, flying over multiplying numbers of German-controlled soldiers, tanks, ballistic missiles, U-boats, aircraft carriers and other warships. Across the Atlantic, the last great democratic power would be desperately trying to forestall its destruction.

According to historian Gerhard L. Weinberg’s book Visions of Victory, Germany planned to eventually conquer its Axis ally, the Japanese empire, after the U.S. was conquered. The Germans would have mastered the world.

In World War ii, Germany was an awesome war machine. But it made strategic mistakes. And God performed miracles to foil Germany and hand victory instead to the Allies.

Bible prophecy indicates that the Germans have learned from their mistakes and have devised a strategy to win the next world war. And this time, America and Britain should not expect God to hand them victory.

Despite being one of the world’s most powerful industrial powers, Germany has no significant oil reserves. This geopolitical reality quickly turned World War ii into a fight over petroleum.

The deadliest war in history began on Sept. 1, 1939, when Nazi Germany invaded Poland. Two days later, Britain and France declared war on Germany, but they were unable to stop Hitler’s juggernaut. The Nazis quickly conquered Poland and then France. With every nation in Western Europe except Britain under his influence, Hitler sent a Nazi force to North Africa under the command of Field Marshall Erwin Rommel.

Four months later, he launched a surprise attack on the Soviet Union!

Up to this point, the Soviet Union was an official ally of Nazi Germany. Hitler’s foreign minister, Joachim von Ribbentrop, had signed a nonaggression pact with the Soviets before the war broke out—a pact that divided Poland between the two dictatorships. So why did Hitler invade North Africa and the Soviet Union before he conquered Britain? This surprise decision transformed Germany’s war from a one-front conflict against a weakened Britain into a three-front fight against Britain, the Soviet Union and France’s North African colonies.

One of the primary reasons for this seemingly irrational decision: Germany needed oil.

Field Marshall Erwin Rommel was trying to capture the Suez Canal, which would have opened a route to the oil field of the Middle East. Meanwhile, Field Marshall Wilhelm List was trying to conquer the Soviet oil field in the Caucasus Mountains. Yet British troops halted Rommel’s advance at the Second Battle of El Alamein and Russian troops halted List’s advance at the Battle of Stalingrad.

Field Marshall Rommel lamented his defeat in a note to himself to be used for his postwar memoirs: “We could have defeated and destroyed the British Field Army, and that would have opened the road to the Suez Canal. … With the entire Mediterranean coastline in our hands, supplies could have been shipped to North Africa unmolested. It would then have been possible to thrust forward into Persia and Iraq in order to cut off the Russians from Basra [which became a major source of Russian oil after Hitler invaded], take possession of the oil fields, and create a base for an attack on southern Russia.”

In summary: Rommel believed Germany would have won World War ii—if it had invaded the Middle East first. Many historians and military analysts agree with this assessment. They believe Hitler could have won World War ii if he had directed Germany’s forces south instead of east. With a nonaggression pact with the Soviet Union already in place, and most of Western Europe under his control, Hitler could have sent German ships, planes and troops swarming across the Mediterranean on a campaign to seize all the oil in the Middle East.

This alternate history never happened: The Nazis lost the war and Hitler committed suicide on April 30, 1945, after his armies crumbled from a lack of men, equipment and fuel. But the Bible reveals that German strategists will adopt a very similar strategy to the one Rommel described in the next world war.

The day after Nazi Germany surrendered to the Allies, the late Herbert W. Armstrong warned World Tomorrow radio listeners that Germany was planning a comeback.

“We don’t understand German thoroughness,” he proclaimed. “From the very start of World War ii, they have considered the possibility of losing this second round, as they did the first—and they have carefully, methodically planned, in such eventuality, the third round—World War iii! Hitler has lost. This round of war, in Europe, is over. And the Nazis have now gone underground. … Now a Nazi underground is methodically planned. They plan to come back and to win on the third try.”

Rommel believed Germany would have won World War II — if it had invaded the Middle East first. Many historians and military analysts agree with this assessment.

Like most nations that sell weapons, Germany is after more than profit. It is building military alliances. In particular, Germany is arming Arab nations in a long-term strategy to undermine the Islamic Republic of Iran.

Iran controls 15 percent of the world’s oil, and has influence with other Middle Eastern oil producers. If Germany wants to become a self-sustaining military power—independent of the U.S. and Russia—it needs this oil. The geopolitical realities Germany faces today are similar to the ones it faced during World War ii, and many German elites are thinking about Middle Eastern oil like Field Marshall Rommel did.

Few people realize this, but Trumpet editor in chief Gerald Flurry reported on this trend back in July 2013. By arming Iran’s Arab rivals, Germany is encircling Iran in preparation for a future war.

“The Iranians are so focused on conquering their own objectives that they don’t see what the Germans are doing,” Mr. Flurry wrote in “The Whirlwind Prophecy.” “They don’t recognize how Germany is planning for the bigger war to come! No one but the Trumpet recognizes it! But the facts are visible for anyone to see. Germany has expected to clash with Iran, and it has been working on a strategy for a decade or more. That strategy is almost complete. Germany has surrounded Iran” (Trumpet, July 2013).

The Trumpet recognizes this secret strategy because our news analysis is based on Bible prophecy!

The real reason the Allies won World War ii is because God performed many miracles on their behalf. At Dunkirk, God miraculously saved the British Expeditionary Force by sending a dense fog to hide their evacuation back to England. At El Alamein, God miraculously protected the Suez Canal by granting Britain victory. And at Peenemuende, God miraculously guided Allied planes to destroy Germany’s secret nuclear weapons research center.

But the Bible prophesies that if America and Britain forget God and turn away from His laws, then God will raise up Germany once again to punish the Anglo-Saxon people for their sins. The book of Isaiah calls America and Britain by their ancient name, Israel, and Germany by its ancient name, Assyria. (Request our free book The United States and Britain in Prophecy, by Herbert W. Armstrong, for proof of these national identities.) Specifically, Isaiah says God will use Assyria as “the rod of [his] anger” against Israel (Isaiah 10:5).

The book of Daniel refers to Germany as “the king of the north,” and says that this king will conquer “the king of the south” and many other nations. “And at the time of the end shall the king of the south push at him: and the king of the north shall come against him like a whirlwind, with chariots, and with horsemen, and with many ships; and he shall enter into the countries, and shall overflow and pass over. … He shall stretch forth his hand also upon the countries: and the land of Egypt shall not escape. But he shall have power over the treasures of gold and of silver, and over all the precious things of Egypt: and the Libyans and the Ethiopians shall be at his steps. But tidings out of the east and out of the north shall trouble him: therefore he shall go forth with great fury to destroy, and utterly to make away many” (Daniel 11:40, 42-44).

Since the 1990s, Mr. Flurry has forecast that radical Islam, led by Iran, will fulfill the role of this biblical king of the south. And he has forecast that oil could be one of the motivating factors in Germany’s secret strategy to conquer the Middle East. In Chapter 5 of Germany and the Holy Roman Empire, Mr. Flurry writes, “Germany, which has virtually no oil, is waiting for an opportunity to take control of the Middle East. It has planned this for years. The need for oil was the trigger that caused Japan to attack Pearl Harbor and start World War ii in the Pacific. That same trigger could be the main reason for the clash between the king of the north and the king of the south.”

So Daniel 11:40-44 reveal the order in which Germany will conquer its enemies. First, German leaders will conquer Iran, Egypt, Libya and Ethiopia. Once these nations are under Germany’s dominion, it will control the vast oil resources of the Middle East and the strategic maritime choke points of Hormuz, Bab el-Mandeb and the Suez Canal. But then, “tidings out of the east and out of the north” will prompt Germany to “go forth with great fury” and destroy many nations—including the U.S., Great Britain and the State of Israel. Finally, once America, Britain and Israel are wiped out, the king of the north will launch a preemptive strike against Russia and its Asian allies (Revelation 9:1-11).

The Bible records that mankind will face extinction in a devastating nuclear war between Europe and Asia, unless Jesus Christ Himself intervenes in world affairs (Matthew 24:22). Fortunately, the Bible records a definitive promise from God that Jesus Christ will intervene to end this madness. After accumulating 6,000 years of evil and suffering, the human race will finally be ready to listen to God and be taught His way of life!