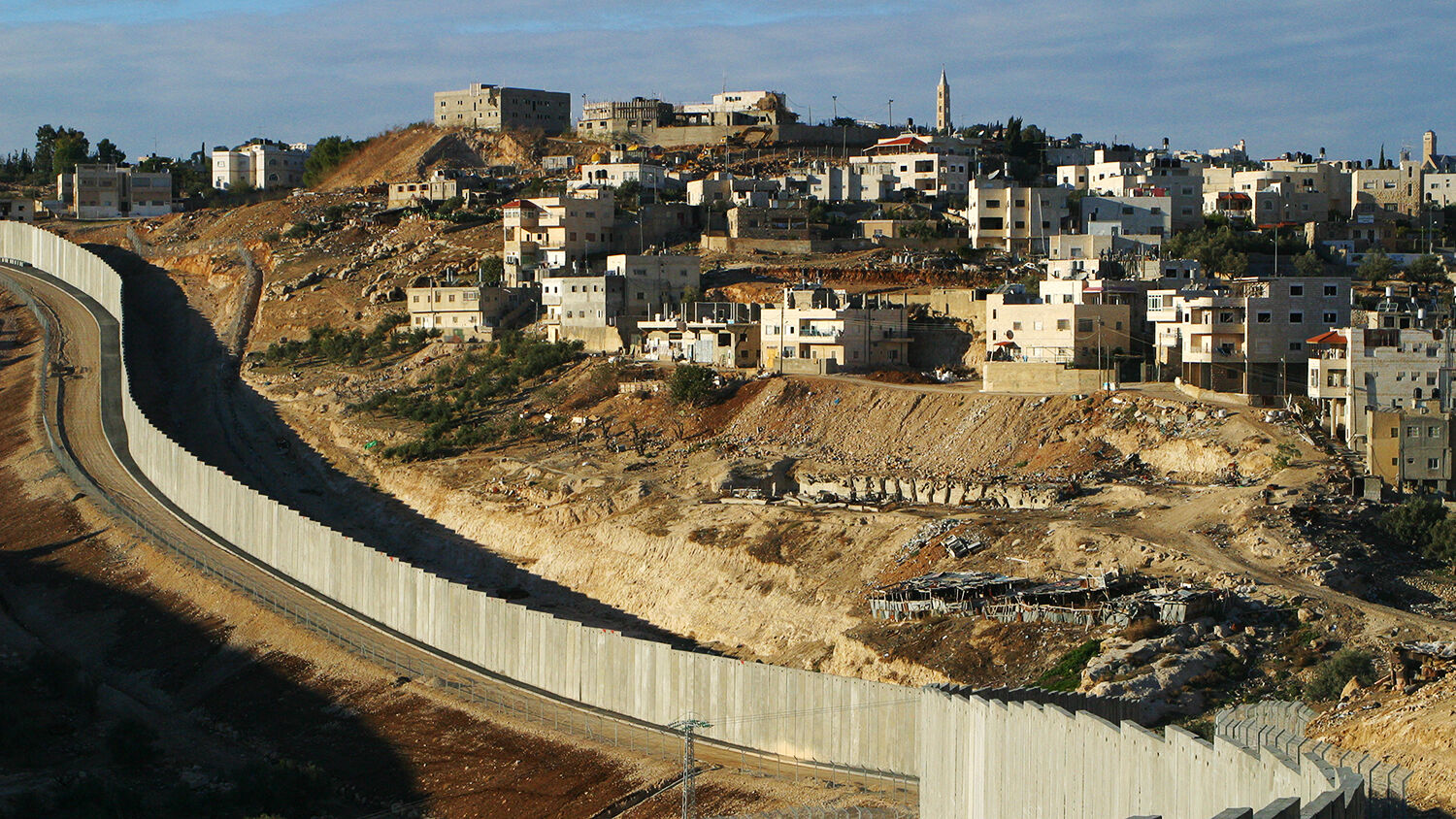 A security fence cuts through communities in Jerusalem and throughout the West Bank.
In Pictures Ltd/Corbis via Getty Images

A region with weak leadership falls prey to Hamas’s vehement desire for conquest.

Israel’s Shin Bet security service has foiled an estimated 300 Hamas-ordered terrorist attacks since January. A rapid succession of attacks earlier this month illuminates Hamas’s fanatic devotion to incite conflict, wrest control from the Palestinian Authority, and raise the banner of Allah over all Israel.

Over the weekend, at least four rockets were fired from Gaza at southern Israel; the Iron Dome missile defense system targeted and intercepted three of the four rockets. Following the attacks, on Saturday night, the Israel Defense Forces (idf) identified an attempted ground infiltration from the Gaza security fence. Israeli troops arrived and thwarted the invasion.

In the time it takes to watch this video, our troops had already arrived at the scene in order to stop the terrorists. pic.twitter.com/gJcQNoPM2V

On August 10, the Israeli military said that it thwarted a “large-scale terror attack” as four Gazan terrorists armed with automatic rifles, bolt cutters, hand grenades, hunting knives and rocket-propelled grenades attempted to infiltrate Israel from the Gaza Strip. According to the military’s statement, the four Palestinians were killed when the idf “opened fire once one of the terrorists scaled the fence,” adding that a grenade was thrown at the troops in the exchange. The idf later released photos of the seized military equipment.

These are the weapons possessed by the terrorists who attempted to infiltrate into Israel from Gaza last night.

On August 8, Dvir Sorek, an off-duty Israeli soldier, was found stabbed to death not far from his residence in the city of Bethlehem in the southern West Bank. The stabbing prompted a large-scale manhunt to find the culprit.

The 19-year-old Sorek had just begun his recruitment but had not yet served in the defense force. He was also a student finishing his religious studies at a yeshiva in a nearby town. Though no Palestinian group has claimed responsibility for the attack, the Palestinian Islamic Jihad terrorist group called the attack “heroic and sending an important message.” Hamas spokesman Hamad al-Raqab told Al-Monitor, “We do not know who in Hamas carried out the attack, but we praise it and we appreciate any armed attack against the thieves of our land.”

19-year-old Corporal Dvir Sorek was stabbed and killed in a terrorist attack early this morning, while neither armed nor in uniform, close to the Yeshiva where he was studying.

May his memory be a blessing. pic.twitter.com/JrJdlJGlUM

Israel’s Ministry of Foreign Affairs said: “The recent series of attacks against Israelis is the direct result of incitement by radical Islamist and terrorist elements, calling on Palestinian youth to murder Jews.”

According to Al-Monitor, on August 6, Israel announced that it “had foiled a bombing attempt that a Hamas cell was planning to execute in Jerusalem.” Shin Bet announced that the terrorist cell was working out of Hebron, a Palestinian city in the West Bank and 18 miles south of the Holy City. The members had manufactured a 3-kilogram explosive device retrofitted with dozens of metal pieces to cause maximum damage.

Hamas terrorists are creating sparks in a region ready to combust. It is only a matter of time until an attack ignites the region into conflict.

Hamas is looking to take advantage of weak leadership in the West Bank. Palestinian Authority President Mahmoud Abbas is 83 years old and unwell. He is frequently admitted into the hospital, and many believe he may soon be forced to step down. What happens after Abbas is “a question that may pave the way for political chaos” if a clear successor is not selected.

Ynetnews said that armed groups, located in the West Bank, “are comprised of refugees from the al-Aqsa Martyrs’ Brigades, the military wing of Fatah during the Second Intifada,” and are “supposed to provide the candidates [to replace Abbas] with firing power in the event that the impending succession war will involve violence and the use of weapons.”

These top Fatah officials know that the transition to a new political leader might well prove to be violent. Ynetnews wrote of Abbas’s possible departure (emphasis added throughout):

The second scenario is that the political situation will revert back to the Second Intifada days, when inner conflicts between the Palestinian groups deteriorated into violent clashes and chaos in the streets. Hamas might benefit from such a scenario and gain power in the West Bank, while Fatah members are fighting among themselves.

When Hamas won the Gaza elections in 2005, Abbas and his Fatah party refused to leave. Violence erupted throughout Gaza. After two years of civil war, Hamas managed to wrest control of the Gaza Strip from Abbas, forcing him to retreat to the West Bank. Hamas proved its ability to succeed in conflict in Gaza, and ever since, it has been working to secretly invade the West Bank.

The exposure of the infrastructure proves once again that the Hamas headquarters in the Gaza Strip and abroad are directing Hamas activities in Judea and Samaria [the West Bank], through any means at their disposal ….

Dr. Moshe Elad, a lecturer in the Middle East department of the Western Galilee Academic College and a colonel in the idf, said:

According to an August 14 report by Israel Hayom, a senior Palestinian Authority security official said, “Arouri gets military aid and economic support from the regime in Tehran and is rigorously working to rehabilitate Hamas’s terrorist cells in the West Bank while exploiting the [Palestinian Authority’s] diplomatic standstill [with Israel] and the fact that the leadership in Ramallah has reduced to a minimum its security cooperation with Israel.”

Hamas, which is now receiving $30 million a month in funding from Iran, has established secret operatives called “sleeper cells” throughout the West Bank. These operatives go about their daily lives until they receive notice that it’s time “to launch a revolution.” When will this “revolution” begin? Elad continued:

Hamas in Gaza is intent on preparing armed sleeper cells throughout the West Bank—not only to create an ability to attack Israel, but also to target its internal rival, the Palestinian Authority.

They believe that the day will come when they can take over the West Bank like they did in Gaza.

However, Hamas’s fervor for conquest extends far beyond the West Bank. For Hamas, the West Bank is a stepping-stone to its ultimate goal.

The Hamas Covenant outlines the goal to “raise the banner of Allah over every inch of Palestine.” Hamas’s ultimate goal is to “obliterate” Israel and overrun Jerusalem. Such an event would likely motivate many moderate Arabs in East Jerusalem to turn radical. Control of the West Bank, which borders East Jerusalem, is a crucial step for Hamas to conquer Jerusalem.

If a succession of war breaks out in the West Bank and Hamas sleeper cells are activated, it will be hard for the Israeli forces to quell the violence, especially if the population supports the Hamas takeover. Bible prophecy indicates that Hamas will gain control of the West Bank. After which, East Jerusalem will be its next target.

Notice a prophecy in Zechariah 14: “For I will gather all nations against Jerusalem to battle; and the city shall be taken, and the houses rifled, and the women ravished; and half of the city shall go forth into captivity, and the residue of the people shall not be cut off from the city” (verse 2). Regarding this end-time prophecy, Trumpet editor in chief Gerald Flurry writes in his booklet Jerusalem in Prophecy, “One half of Jerusalem is to be taken captive. Notice how specific this prophecy is. East Jerusalem—one half of the city—will be conquered by the Palestinians!” Iran and Hamas’s goals both align with this end-time prophecy.

However, Hamas and Iran’s half-victory will be short-lived. This crisis triggers the Second Coming of Jesus Christ. “Then shall the Lord go forth, and fight against those nations, as when he fought in the day of battle. And his feet shall stand in that day upon the mount of Olives, which is before Jerusalem on the east …” (verses 3-4). When He comes, He will be “king over all the earth” (verses 4 and 9), and “there shall be no more utter destruction; but Jerusalem shall be safely inhabited” (verse 11).

To learn about where this explosion is leading and why you need to be watching, request your free copy of Jerusalem in Prophecy, by Gerald Flurry.