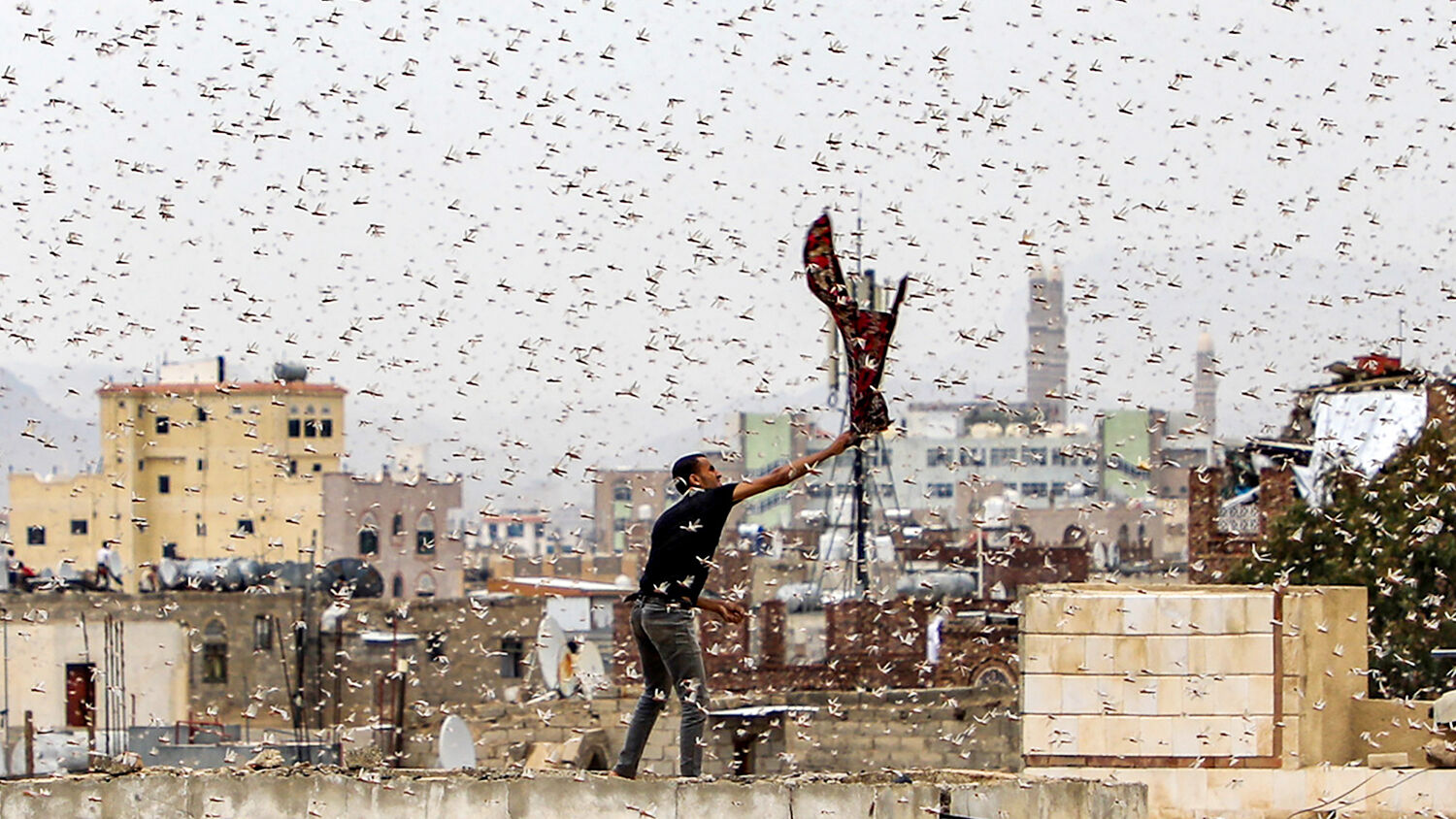 A man on a rooftop tries to catch locusts swarming over Sanaa, Yemen, on July 28.
Mohammed Huwais/AFP/GettyImages

The potential for destruction is immense.

What has often been dubbed the ultimate Bible plague is coming to Egypt’s neighbors: the devouring locust. The United Nations Food and Agriculture Organization warned on July 25 that desert locusts are on course to wreak havoc on agricultural production in Yemen, Sudan, Eritrea, Ethiopia and Somalia.

“There is a moderate-to-high risk of the desert locust situation escalating further in the interior and coastal areas of Yemen and in the interior of Sudan, causing swarms to form that would threaten agricultural production by the end of the summer,” the Food and Agriculture Organization wrote. “This will be followed by further increases along both sides of the Red Sea during the upcoming winter from November onwards.”

Yemen is the organization’s greatest concern of all the nations facing the pestilence. It is already facing the world’s worst humanitarian crisis, the aftermath of an insurgency by Iranian-backed rebels, and an invasion by a counterattacking Saudi-led coalition. Now it is facing an aerial and ground invasion of locusts with a mission to devour any edible greenery in their path.

The desert locust’s potential for destruction is immense.

For each of the 60 days of its life, a single female locust will eat its body weight in vegetation. During that lifespan, it will lay about 300 eggs, contributing to a dramatic population explosion. A small swarm of millions of these will eat as much food as 35,000 people—each day.

Larger swarms can be 40 miles wide, containing billions of locusts, traveling 90 miles a day, and devouring hundreds of tons of vital vegetation.

Regarding the locusts that plagued ancient Egypt, the Bible records: “And the locusts went up over all the land of Egypt, and rested in all the coasts of Egypt: very grievous were they …. [T]hey did eat every herb of the land, and all the fruit of the trees … and there remained not any green thing in the trees, or in the herbs of the field, through all the land of Egypt” (Exodus 10:14-15).

As devastating as these locusts were, the biblical account shows that God has the power, both anciently and today, to subdue an army of insects—far beyond what any man-made pesticide could.

And God can also conquer an army of human soldiers, often figuratively represented in the Bible by locusts.

Through the Prophet Joel, God prophesied of a soon-coming time when He will powerfully intervene in the affairs of men and save us from the plague of both figurative and literal locusts: “I will restore to you the years that the locust hath eaten, the cankerworm, and the caterpiller, and the palmerworm, my great army which I sent among you. And ye shall eat in plenty, and be satisfied, and praise the name of the Lord your God, that hath dealt wondrously with you: and my people shall never be ashamed. And ye shall know that … I am the Lord your God, and none else: and my people shall never be ashamed” (Joel 2:25-27).

Verse 13 shows that God conditions all these blessings on obedience to His law. Referring to that scripture, Trumpet editor in chief Gerald Flurry writes in his free booklet The Prophet Joel—Christ’s Bride and the Day of the Lord: “There is towering hope in this verse. God may ‘repenteth … of the evil.’ He may change many of our problems immediately. ‘Who knoweth if he will return and repent, and leave a blessing behind him; even a meat offering and a drink offering unto the Lord your God?’ (verse 14). Who knows, God may remove the big trial you have now. Your whole life could be revolutionized today! God promises forgiveness as well as punishment. And He never lies (Hebrews 6:18).”

Whether it’s ancient Egypt’s or modern Egypt’s neighbors, God can protect people from locusts, both figurative and literal. When mankind starts learning true repentance, he will “eat in plenty, and be satisfied, and praise the name of the Lord your God.” Thank God that time is nearly upon us. Learn more about that time by reading The Prophet Joel—Christ’s Bride and the Day of the Lord and The Wonderful World Tomorrow—What It Will Be Like.