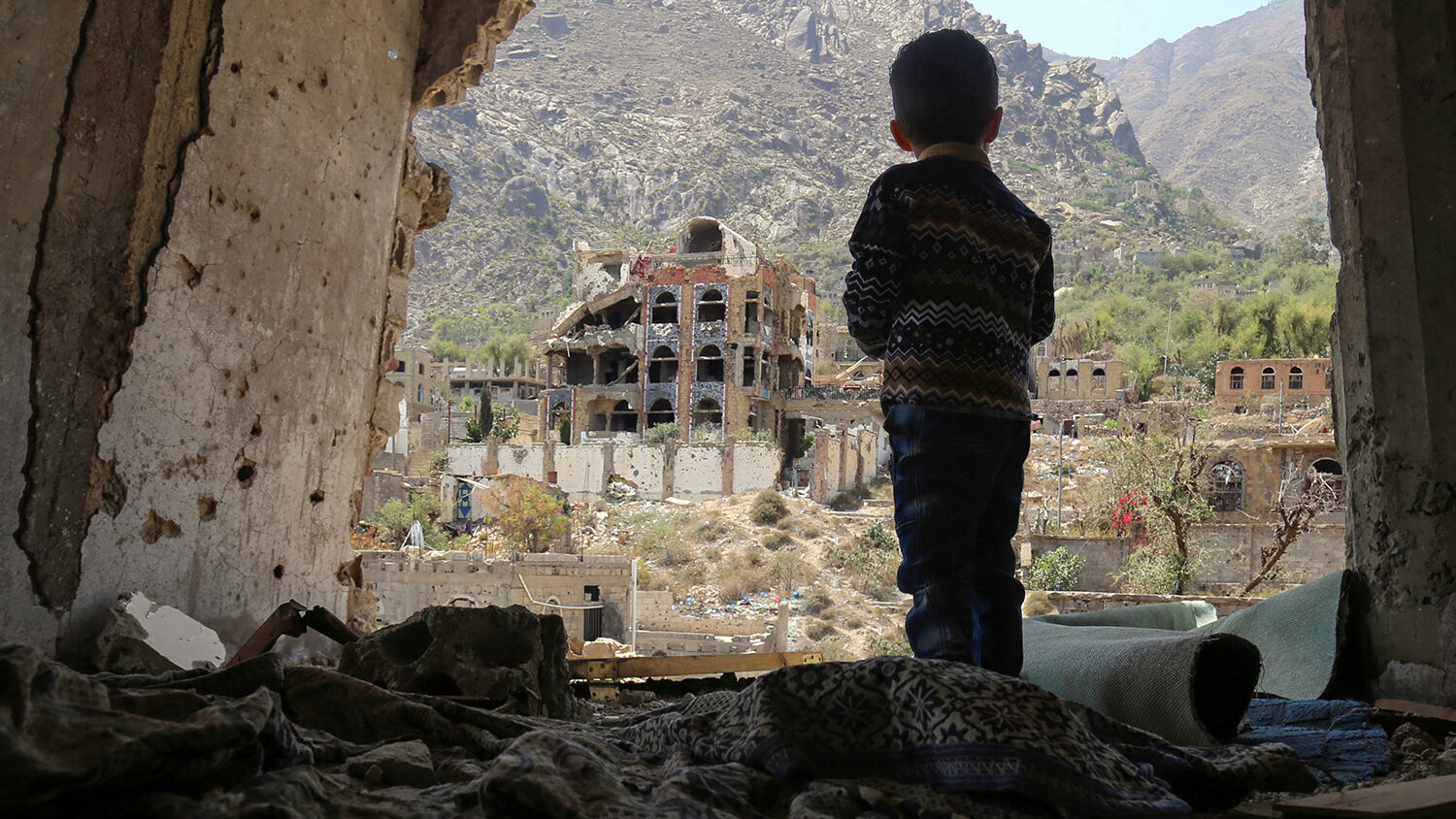 On March 18, 2018, a Yemeni child looks out at buildings damaged in an air strike in the southern Yemeni city of Taez.
AHMAD AL-BASHA/AFP/Getty Images

The crisis in Yemen is a harrowing case study of the main causes of global suffering and of the short- and long-term solutions.

“I know war as few other men now living know it, and nothing to me is more revolting.”

These words, from American war hero Gen. Douglas MacArthur, are hard to argue with. In his farewell address to Congress on April 19, 1951, the five-star general said about war: “I have long advocated its complete abolition, as its very destructiveness on both friend and foe has rendered it useless as a means of settling international disputes.”

The message from humanitarian aid authorities seems to suggest that the solution to the Yemen crisis is agonizingly near, yet somehow, so far away. How has the world failed to resolve such a damning calamity for almost three years? And what exactly does it take to end “the world’s worst humanitarian crisis”?

War by the Numbers

According to some observers, the bombs and bullets flying across Yemen have killed at least 85,000 people, and the grim reapers of starvation and disease have killed thousands of others, including 80,000 children below the age of 5. By the time you finish reading this article, statistics indicate that another child in Yemen will have died from starvation and disease. One child every 10 minutes!

The survivors aren’t that much better off. Oxfam Canada’s women’s rights policy specialist Brittany Lambert reported that girls as young as 3 are being married off for food. The bbc’s Lyse Doucet recently visited Yemen and reported that some of the malnourished babies she saw didn’t even look like babies because their skin was so shriveled up. Some had been blinded by a combination of malnourishment and disease. Geert Cappelaere, UN International Children’s Emergency Fund regional director for the Middle East and North Africa, reported similar conditions, including children half-paralyzed by diphtheria.

“As we all know, chronic malnutrition has an incredibly important impact on a child’s brain development,” Cappelaere said in November. “So the 50 percent of Yemeni children under the age of 5 who are today chronically malnourished are all children who will never develop to their full intellectual potential. That is bad for the children and bad for Yemen, if we ever want Yemen to be a country where it is good to live as a child.”

Cappelaere told Al-Jazeera last month: “Yemen is the worst place on Earth for a child.”

All totaled, 4 in 5 people in Yemen—24 million people—desperately need humanitarian assistance to survive.

At the donors’ meeting on February 26, UN Secretary General Guterres lamented: “A third pledging conference can never be a good thing. We all wish we did not need to be here.”

The UN said Yemen desperately needs $4 billion in humanitarian aid—the UN’s biggest-ever appeal for a country. But the nations represented at the conference could only pledge $2.6 billion. The money will help, but it clearly falls short of what Yemen desperately needs. Worse, the amount pledged for Yemen doesn’t match the amount spent on the weapons that are largely contributing to the humanitarian crisis in Yemen. “[W]hile billions are spent on bombs and weapons bringing death and destruction,” lamented Mohamed Abdi, the director of the Norwegian Refugee Council in Yemen, “much less is made available to save lives of Yemeni civilians.”

Even if the humanitarian aid fund for Yemen was adequate by anyone’s measure, it would, at best, merely mask or mitigate the problem without really solving it—at least not permanently. But Yemen deserves a permanent solution, especially more so after three years of a humanitarian disaster and decades of economic and political mismanagement.

The fighting has greatly hindered humanitarian authorities from actually helping the needy in Yemen. In December, the two sides (the Houthi rebels that overthrew the Yemeni government in 2015, and the Saudi-led military coalition that intervened thereafter) agreed to a ceasefire in the port city of Hodeidah, where most humanitarian aid comes through and where a month’s supply of it has been sequestered for about six months. While the ceasefire has held to some extent, both sides missed the deadline for withdrawing from the region, and sporadic fighting in Hodeidah continues. Houthi rebels have reportedly booby-trapped UN food warehouses in the city.

Yemen is a stark corroboration of what agricultural economist and a coauthor of World Hunger: Twelve Myths, Peter Rosset, once said: “The true source of world hunger is not scarcity but policy; not inevitability but politics.” Sen. Sam Brownback said something similar at a Senate hearing in 2002 when he testified: “[E]very famine is complicated by politics. … Politics is killing people, literally.”

The Problem, the Solution: Government

Even before the war began, Yemen was plagued with a multitude of economic and political problems. It was the poorest nation in the Middle East, and it was beset by problems in governance.

Until 1962, Yemen was a Shiite theocracy. Then a bloody revolution broke out and it became the Arabian Peninsula’s sole democracy. For over a decade now, the Houthi rebels have been revolting against that democratic government and trying to reinstate a Shiite theocracy in Yemen. Their partial success in toppling the government in 2015 and the consequent war there has only made the governance and humanitarian situation in Yemen worse.

Back in November, unicef’s Geert Cappelaere spoke at a press conference about Yemen’s crisis, focusing more on its effects on children in particular. In his statement, he referenced Amal Hussain, a now-deceased 7-year-old girl whose emaciated body was featured on the front page of the New York Times to grab the world’s attention. Notice this profound statement from Cappelaere (emphasis added throughout):

All the suffering today of the millions of children in Yemen is man-made. If today we are looking at the risk of a potential famine in Yemen, there is no single natural cause for that. It is simply because of reasons for which adults are responsible but for which children will pay the highest price. …

When Cappelaere talked about Yemeni governance “in which the interest of the Yemeni people will be at the center,” he was probably thinking of, and hoping for, Western-type, democratic governance. But as wonderful as such governance would be for Yemen, it still wouldn’t be enough—because even democratic governments fall short of placing the interests of people at the center. Democracy, as Sir Winston Churchill famously said, is “the worst form of government except all those other forms that have been tried from time to time.” A Shiite theocracy, as the 1962 revolution proved, would be worse.

The one form of government that has not yet been tried to its fullest extent in all the years of man’s existence is God’s theocratic government, or the Kingdom of God. The Bible prophesies that the Kingdom of God is at hand and that the true God is about to establish it in Yemen and in every other nation on Earth!

That Kingdom, or government, of God will be one of the main ways God will solve the problems plaguing the world today. All officials of that government will have been hand-picked by God alone. They will have been specially trained and qualified to rule justly and lovingly.

Why will God establish His government then, and not now? Why did God not establish this kingdom of peace before the Yemen war began in 2015? Or before any other war? These questions actually require a book to answer. Our free book Mystery of the Ages, by Herbert W. Armstrong, will do just that. We promise!

There is actually more to the Kingdom of God’s success in establishing peace all over the Earth than governance and administration. God’s government will also help people recapture the true values and learn about the way of life that causes good for everyone. It will place the interests of everyone at the center, and it will educate people to do the same!

More specifically and significantly, God’s government will effectively change human nature. That change is what we really need to completely abolish war and live in peace and harmony, as we soon will.

In the same speech in which he championed the abolition of war, Gen. Douglas MacArthur also said, “But once war is forced upon us, there is no other alternative than to apply every available means to bring it to a swift end.” He understood that prolonged war is worse than swift war, and the purpose of war is to end war.

“General MacArthur had the big overview perhaps more than any other American leader,” writes Trumpet editor in chief Gerald Flurry in his free booklet ‘We Have Had Our Last Chance.’ “Great generals like MacArthur were great because they had a worldview and the courage to fight for a world of free men.”

MacArthur understood the utter destructiveness of war. He also understood the shortcomings of human governments and alliances. More specifically and significantly, he understood the reality that the complete abolition of war will require God’s intervention and a total change of human nature.

Shortly after the end of World War ii, he said:

Men, since the beginning of time, have sought peace. Various methods through the ages have been attempted to devise an international process to prevent or settle disputes between nations. From the very start, workable methods were found in-so-far as individual citizens were concerned, but the mechanics of an instrumentality of larger international scope have never been successful. Military alliances, balances of powers, leagues of nations, all in turn failed, leaving the only path to be by way of the crucible of war. The utter destructiveness of war now blots out this alternative. We have had our last chance. If we will not devise some greater and equitable system, our Armageddon will be at our door. The problem basically is theological and involves a spiritual recrudescence, an improvement of human character that will synchronize with our almost matchless advances in science, art, literature and all material and cultural developments of the past 2,000 years. It must be of the spirit if we are to save the flesh.

The Kingdom of God is “the only way out.” And it is at hand! To gain an idea of the peace it will bring and the role you could play in it, request Herbert W. Armstrong’s free books The Wonderful World Tomorrow—What It Will Be Like and Mystery of the Ages.