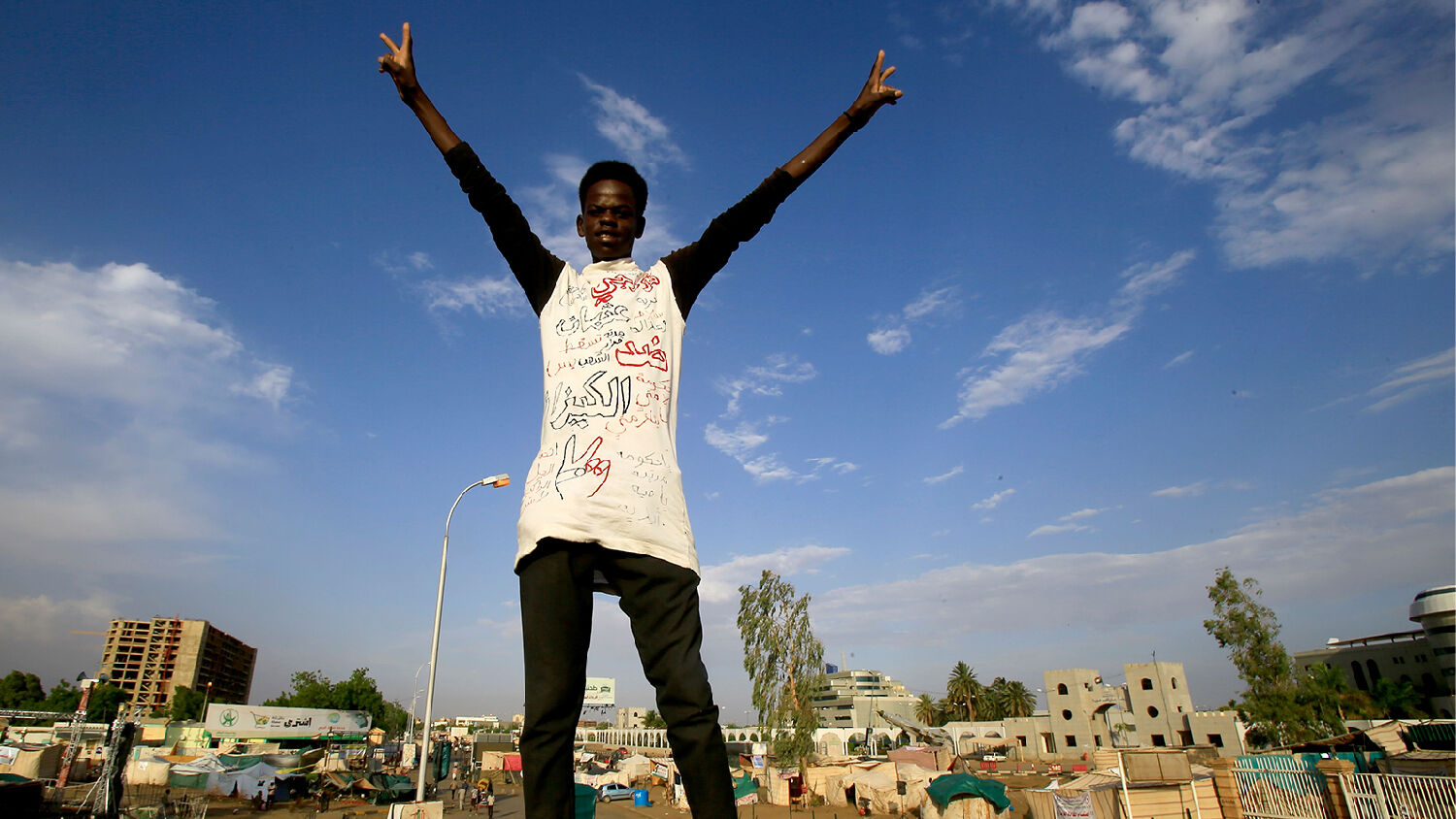 A Sudanese man flashes the V for victory sign in Khartoum on June 2.
ASHRAF SHAZLY/AFP/Getty Images

One chant that reveals the plight of anti-government protesters in Sudan, and what the future of their troubled nation might be

Anti-government protests in Sudan didn’t end on April 11 when the military toppled the 30-year dictatorship of President Omar al-Bashir. Another wave of protests swept across the North African nation on June 3, when the Transitional Military Council canceled a power-transfer deal with protesters, cracked down on their weeks-long sit-in outside Sudan’s military headquarters, and called for early elections.

During the latest protests, multiple reports have implicated Sudan’s security forces in horrific atrocities against civilian protesters: using rape as a weapon, burning protesters in their sit-in tents, tying weights around people and drowning them in the Nile, shooting protesters to either maim or kill.

According to the military council, it was the protesters who committed “a fully-fledged crime” when they barricaded roads. They allegedly “crossed the line of peaceful practices … and have become a major liability for the country and the people’s security.” Hence the military’s crackdown to “restore life back to normal.”

Yet virtually any action the military took to “restore” normalcy actually fed the outrage of the protesters in an inevitable and vicious cycle.

That vicious cycle appears to have broken, for now, following an announcement on June 11 by a foreign mediator in the crisis that protest leaders had agreed to suspend demonstrations.

But the future of the protest movement in Sudan will most likely be predicated on this popular chant: “Either victory or Egypt.”

Packed into those four words are these demands:

The military establishment in Egypt received significant support from Saudi Arabia and the United Arab Emirates, two Middle Eastern nations that are determined to stabilize the region by fighting particular brands of Islamic terrorism. The military establishment in Sudan has also received significant support from Saudi Arabia, the United Arab Emirates and Sisi’s Egypt.

“Our priorities are Sudan’s security and stability,” Saudi Arabia’s minister of state for African Affairs was quoted as saying. “We are confident that the people of Sudan will not allow their country to descend into chaos and civil war, which only serves the forces of terrorism and extremism.” It’s hard to dismiss such a concern, given that Islamic State supporters in Sudan had encouraged jihad against the country’s military council because peaceful protests, they said, had proved futile.

So the Sudanese populace wants its own version of the Egyptian Arab Spring—except the part where the military overthrew the leader the people had protested for and voted for. Saudi Arabia, the U.A.E. and Egypt want only that part where the military establishment reasserts itself against rogue elements, some of which might otherwise have majority support.

The Bible forecasts some important changes for this region. Daniel 11:40-43 describe a clash between a European king of the north and a Iranian-led radical Islamic king of the south. These verses tell us that Egypt, Libya and Ethiopia will be allied with the king of the south.

Sudan once had a close relationship with Iran. Ancient Egypt included parts of Sudan, and ancient Ethiopia included southern Egypt, northern Sudan, Eritrea, Djibouti and western Yemen. These regions have been destabilized by radical Islam in recent times and remain vulnerable to more of its destabilizing influence in the near future. These verses may indicate that Sudan will also be in the Iranian camp.

Destabilization in this area could have a major impact on the wider region. It would allow radical Islam to gain a foothold that it could use to move in to Egypt or Ethiopia. Its effect on Egypt could be particularly significant. In the October-November 2012 Trumpet magazine, editor in chief Gerald Flurry wrote: “We need to understand the enormous impact that Egypt working with Iran will have in the Middle East and even globally. This Iran-Egypt axis is going to change the game in the Middle East—particularly in Libya and Ethiopia.”

Unrest in Sudan could help reignite the struggle in Egypt—which would be a major change for the region and an important step in the fulfillment of Bible prophecy.

Keep watching Sudan. Remember what Bible prophecy says about Sudan, North Africa, the Middle East and Europe. Our free booklets The King of the South and Libya and Ethiopia in Prophecy can guide you through the Bible passages describing this key prophecy.