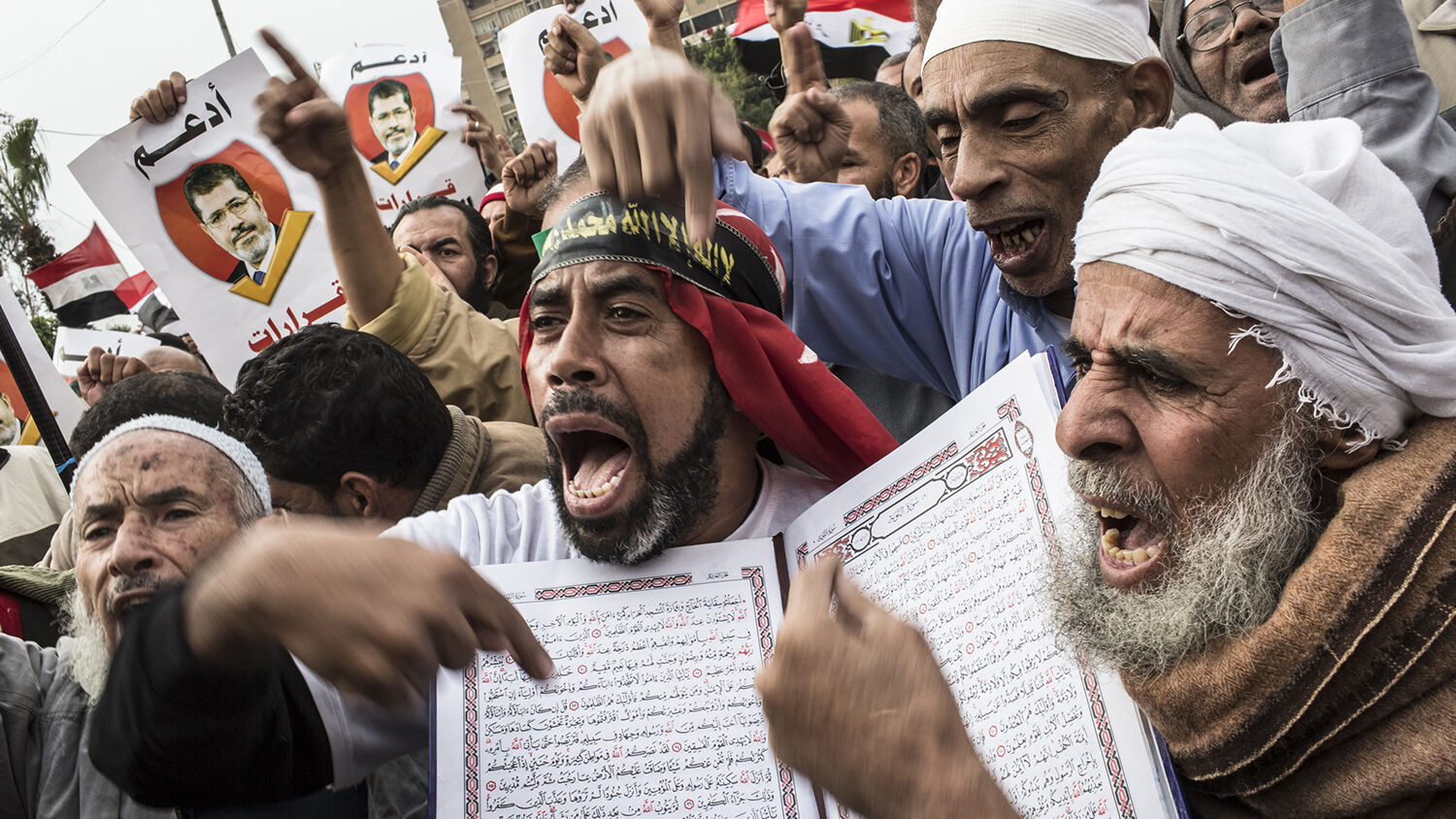 Supporters of Egyptian President Mohamed Morsi and members of the Muslim Brotherhood chant slogans during a rally on Dec. 14, 2012, in Cairo, Egypt.
Getty Images

What radical Islam did in Egypt in 2012 is just as revealing as the magnitude of the effort that has since been expended to curtail it.

For nearly 20 years before the Egyptian Arab Spring ousted President Hosni Mubarak and empowered the Muslim Brotherhood’s radical Mohamed Morsi, the Trumpet has watched events in Egypt through the lens of Bible prophecy and consistently proclaimed that Egypt would dramatically radicalize.

“Islamic extremism is gaining power at a frightening pace in Egypt,” Trumpet editor in chief Gerald Flurry wrote in July 1993. He continued:

There is a prophecy that indicates Egypt will probably fall to Islam—or be strongly influenced by Islam. Let’s read Daniel 11:40 and 42: “And at the time of the end shall the king of the south [radical Islam led by Iran] push at him: and the king of the north shall come against him like a whirlwind, with chariots, and with horsemen, and with many ships; and he shall enter into the countries, and shall overflow and pass over. … He shall stretch forth his hand also upon the countries: and the land of Egypt shall not escape.” This verse indicates Egypt will be allied with the king of the south. That is probably the reason Egypt is also attacked and taken captive!

Mr. Flurry concluded that section of his article by writing, “I believe this prophecy in Daniel 11:42 indicates you are about to see a radical change in Egyptian politics!”

How true and profound that statement has since proved to be!

Before the radical changes that occurred in Egyptian politics during the Arab Spring of 2011, smaller but nonetheless significant changes were already happening in the nation. For instance, while President Mubarak was staunchly opposed to the Iranian regime and the Muslim Brotherhood in his own country, he somewhat reluctantly engaged Iranian leaders in an effort to establish full diplomatic relations, and he opened up the political process in Egypt to the Brotherhood’s participation.

But when a radical Islamist declared, “The Koran is our constitution, the prophet is our leader, jihad is our path, and death in the name of Allah is our goal,” and seized the reins of power in Egypt in 2012, the sheer extent of the threat of radical Islam in Egypt and the larger Mideast region was on full display.

Within two months of his presidency, Morsi had 1) severed Cairo’s three-decade allegiance to the United States; 2) begun courting China to replace the U.S. as his bankroller; 3) trashed Egypt’s historic and pivotal peace treaty with Israel; 4) wrested control of the government away from Egypt’s Supreme Council of the Armed Forces; 5) appropriated the power to approve the country’s new constitution; 6) established Egypt as Iran’s most powerful regional ally; and 7) delivered the Suez Canal and the Red Sea into the hands of Iran and radical Islam.

Morsi was ousted from power via a coup d’état by Gen. Abdel Fattah al-Sisi in July 2013, a short 12 months later. From that time, the extent of radical Islam’s threat in Egypt suddenly became less apparent.

That is, only if you overlooked exactly what it took to oust Morsi and the extraordinary measures taken to try to keep a tight lid on the radical Islam that has been “gaining power at a frightening pace in Egypt.”

The Extent of Sisi’s Clampdown on Radical Islam

It is becoming clearer that, far more than anything else, it has taken nothing short of the revolutionary, unprecedented, unusual strong-armed rule of Morsi’s successor to suppress an Islamic revolution in Egypt. It has taken the benevolent dictator of sorts that Sisi appears to be.

Before General Sisi toppled his president, he was the head of the largely Islamist military intelligence unit of Egypt. His familial ties to one of the founders of the Muslim Brotherhood gave him the appearance of a perfect candidate for Morsi to appoint to head Egypt’s Defense Ministry.

Sisi was “widely expected to promote the Brotherhood’s agenda,” wrote the Middle East Quarterly’s Cynthia Farahat. “Instead, not only was Sisi to engineer the overthrow of the Brotherhood regime in July 2013, but he has turned out to be the most moderate president in Egypt’s modern history, and among the most enlightened of Muslim politicians anywhere” (Spring 2019).

Considering moderate predecessors like Hosni Mubarak and Anwar Sadat, that’s quite a statement.

Islamism having been since 1952 the core ideology of the Egyptian military, it was widely expected that Sisi would sustain the Brotherhood’s outlook. In fact, the opposite transpired: Sisi’s actions have been revolutionary and historically unprecedented, both in Egypt and in the history of most Muslim majority countries, especially his attempt to de-radicalize Egypt and reform the religious views he inherited from his predecessors.

Sisi, himself a Muslim, has supported and protected religious minorities and cracked down on radical Muslims in a way no other Egyptian leader has ever done. According to the Middle East Quarterly, these are some of the highlights of his unusual track record:

In an example of what the Middle East Quarterly referred to as “a complete reversal of traditional Muslim attitudes to religious minorities,” Sisi reassured Christians: “[W]e would die for you.”

“I always say this and repeat it: Destruction, ruin and killing will never be able to defeat goodness, construction, love and peace. It’s impossible,” Sisi told an Orthodox Christian congregation last year. “Pay attention: You are our family. You are part of us. We are one, and no one will ever drive a wedge between us.”

President Sisi is obviously imperfect in many ways, but he is quite remarkable in others. “Be not overcome of evil,” the Bible concurs with Sisi, “but overcome evil with good.” Unfortunately, Sisi, like every one of us, is unable to utterly and permanently overcome evil with good, apart from God. It’s impossible for him alone to completely suppress radical Islam in Egypt under a tight lid. And in so many ways, the radical measures Sisi has taken against Egyptian Islamists show the enormity of what he’s up against. It’s much bigger than the strong, moderate Egyptian leader.

The Legacy of the Brotherhood

President Sisi is up against an Islamist organization that has heavily influenced Egyptian society since its founding in 1928! He is up against the only movement that ever won the majority vote in a free election in all of Egypt’s history! That’s what the Muslim Brotherhood accomplished in the elections that empowered the Islamist Morsi in 2012.

The debates that abound about the real nature of the Muslim Brotherhood are primarily because the Brotherhood “exhibits an image of moderation” whenever “the balance of power with other political forces—whether they are in government or in the opposition—is not in their favor,” as Arab affairs expert and author Abdel Monem Said Aly wrote in “The Truth About the Muslim Brotherhood.”

Aly explained that the real nature of the Muslim Brotherhood can actually be illustrated by the organization’s logo and flag, which depict “two crossed swords with the Koran in between and under the swords the word ‘Prepare,’ which is the initial word in a Koranic verse that commands Muslims to ready themselves for ‘terrifying the enemy of God and your enemy’” (May 16, 2018).

The Muslim Brotherhood is a terrorist organization—period. Its affiliates have assassinated leaders like Egyptian President Anwar Sadat and attempted to assassinate Sadat’s predecessor, Gamal Abdel Nasser. Many of the world’s worst terrorists—people like al Qaeda’s current leader Ayman al-Zawahiri, 9/11 mastermind Khalid Sheikh Mohammed, American Airlines Flight 11 hijacker-pilot Mohammed Atta—started as Brotherhood members. Authorities say that the Muslim Brotherhood supports and funds other terrorist organizations such as the Islamic State, and some Brotherhood jihadists have reportedly joined the terror outfit.

While the Muslim Brotherhood’s chief terror targets have appeared to be limited to Egypt, they extend far beyond the borders of the Middle East. Israeli Ambassador Dore Gold wrote for the Jerusalem Center for Public Affairs on January 9: “There was no ambiguity about the purpose of the Muslim Brotherhood. Indeed, the founder of the Muslim Brotherhood, Hassan al-Banna, used to write that the flag of Islam must be raised again in territories it once ruled, like Andalusia (Spain), Sicily, the Balkans, the coast of Italy, as well as the islands of the Mediterranean” (January 9).

That language resembles statements like this 2002 declaration from another Brotherhood leader: “Islam will return to Europe as a conqueror and victor, after being expelled from it twice.”

Is the Muslim Brotherhood about to pose a much bigger threat to Egypt, the Middle East and Islam’s chief traditional rival, Europe? And will it soon strengthen its ties to the terrorist regime in Iran?

Notice what else Aly wrote in his article:

Brotherhood members strive to create a theocratic regime not so different from the Iranian political system. In their actions, organization and ideology, the [Muslim Brotherhood] acts as an incubator of terrorists, a mobilizer of human and material resources to fund and to defend terrorism, whether directly or indirectly.

The global reach of the organization has given the Muslim Brotherhood the ability to survive by adapting itself to existent political realities.

However things work out in Egypt, you can be sure that “a radical change in Egyptian politics” is coming. That’s precisely what Bible prophecy says!

The book of Daniel talks about that change. Daniel spoke of a “king of the south” (Daniel 11:40). He prophesied that king of the south would ally himself with Egypt in this end time. (Request our free booklet The King of the South for proof.) …

Egypt happens to be one of the allies of the king of the south, and that forebodes a lot of bad news for the Egyptians. Notice: “He [the European power] shall stretch forth his hand also upon the countries: and the land of Egypt shall not escape” (verse 42). Why would this European power want to conquer Egypt or at least have virtual control over it? Why would that be necessary when it goes into the Middle East—unless Egypt was allied with the king of the south, or Iran? Just a little reading between the lines here makes it pretty obvious what this scripture means.

If you would like to understand these prophecies in greater detail, read “Why the Trumpet Watches Iran Allying With Egypt” and request The King of the South.

Mr. Flurry concluded his March 2008 article with this profound and inspiring statement: “Daniel was written over 2,500 years ago. God knew Egypt would retain the same name it had almost from the beginning and that it would ally itself with Iran! That’s something to get excited about, because one of the foundational proofs of the Bible being God’s Word is fulfilled prophecy!” (emphasis added).