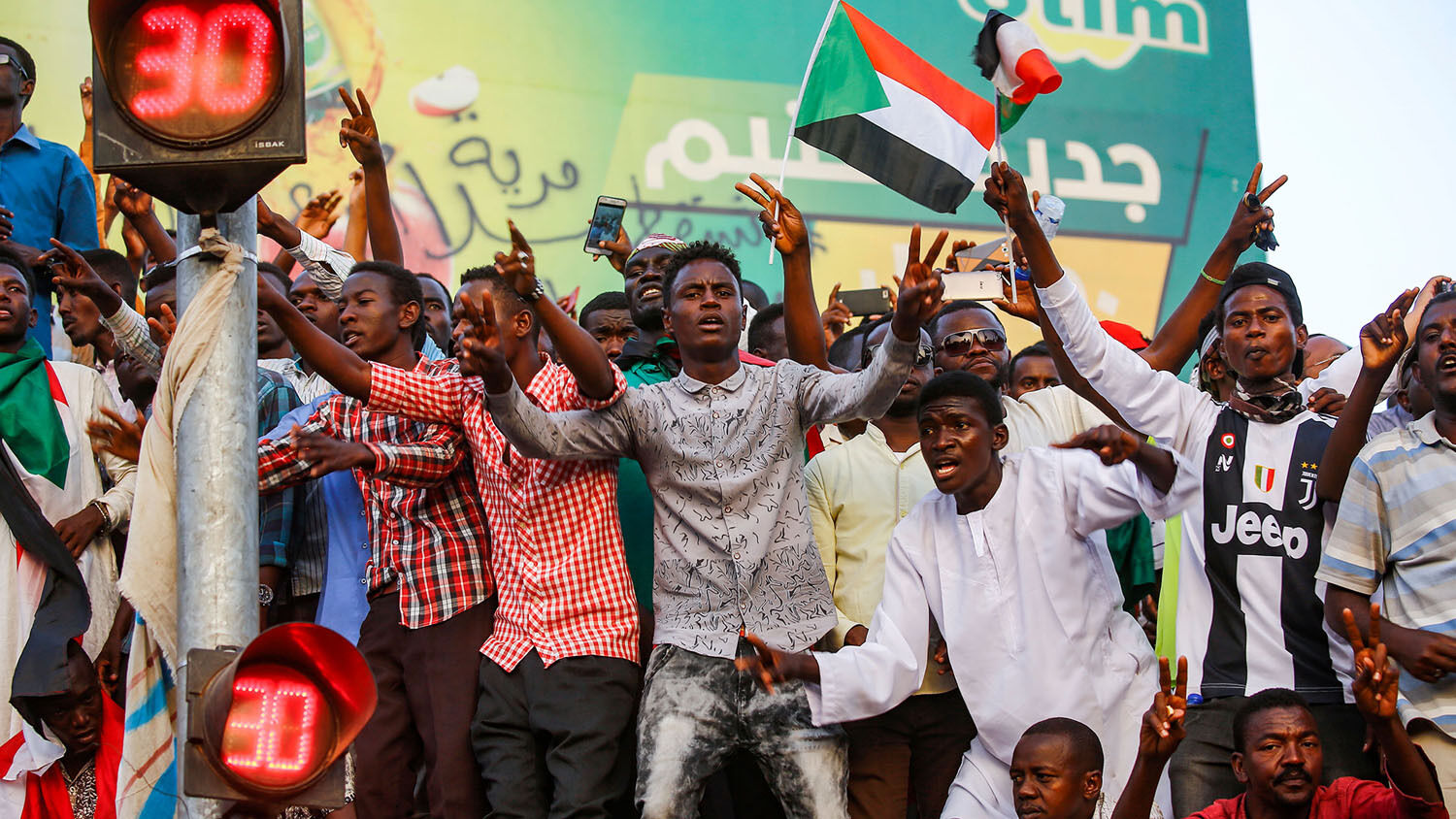 Sudanese protesters outside the army headquarters in Khartoum on April 12 demand a civilian body to lead the transition to democracy.
ASHRAF SHAZLY/AFP/Getty Images

The coup that ended Omar al-Bashir’s 30-year dictatorship may not be enough to end Sudan’s troubles.

After four months of unremitting civilian protests against his dictatorial rule, the Sudanese military toppled President Omar al-Bashir on April 11, making him the sixth victim of the Arab Spring and the 101st casualty of yet another “successful” coup d’état in Africa.

While uncertainty looms large on the horizon in Sudan, history and Bible prophecy shed enough light on the certain future of Sudan.

Ethnically and religiously divided Sudan has had more coup attempts than any other country in Africa. The last “successful” attempt was led by Gen. Omar al-Bashir and Islamist scholar Hassan al-Turabi in 1989.

When Bashir became president, his regime “suspended the constitution, banned all political parties and trade unions, and closed down the formerly free press,” as New York Times bestselling author David Wallechinsky writes in Tyrants: The World’s 20 Worst Living Dictators. “When the presidents of eight labor unions and professional associations submitted a petition for the democratic election of union officials, Bashir had them all arrested. He banned the Sudanese Bar Association, took charge of the appointment of judges (who had previously been chosen by sitting judges), and imposed an Islamic judicial system on the entire country.”

Omar al-Bashir bears responsibility for multiple ethnic-based atrocities in Sudan, the most notorious of which is the ongoing genocide in the Darfur region in western Sudan, which began in 2003, and for which he is wanted by the International Criminal Court for war crimes and crimes against humanity.

The ethnic conflict that ravaged Sudan under Bashir’s watch forced the nation to split in 2011, creating the world’s newest nation, South Sudan. And even after all of that, Bashir decreed that the 500,000 to 700,000 Christians in Sudan were no longer citizens, telling them to relocate to South Sudan

Perhaps far more significantly, Bashir’s Sudan was a state sponsor of terrorism that harbored Osama bin Laden, the most notorious terrorist in the world, from 1992 to 1996. It also forged strong military ties with Iran, the number one state sponsor of Islamist terrorism. Sudan became an important transit point for Iran to smuggle missiles and other weapons to Hamas terrorists in Israel. It even hosted Iranian weapons factories, one of which Israel ostensibly destroyed in 2012.

Bashir’s rule obviously did not help Sudan’s economy. The situation became so bad that he felt compelled to curtail his nation’s involvement in global terrorism in order to ease the burden of economic sanctions imposed on Sudan, and he embraced new, anti-Iranian allies. He did this for political and economic expediency, not because of a change of heart.

The protests that eventually led to his ouster were sparked by increased economic hardship, exacerbated by the government’s hike of the price of bread in December.

The April 11 coup was announced to the world by Sudanese Defense Minister Awad Mohammed ibn Ouf, a man Bashir had promoted to the additional position of vice president in February. Like Bashir, ibn Ouf is under United States sanctions for his involvement in the Darfur genocide.

Ibn Ouf announced that the military has suspended the constitution and dissolved the government, replacing it with a transitional military government to rule Sudan for two years. He also declared a state of emergency for three months, closed the nation’s borders and airspace, and imposed a curfew that is supposed to last a month.

But protesters want an immediate transitional civilian government to completely overhaul governance of the nation. As one activist said, “What is happening in Sudan is that the old system is being rebuilt in new clothes.”

Ibn Ouf, the transitional leader of that “system,” stepped down just one day after the military coup. His replacement, Lt. Gen. Abdel Fattah Abdelrahman Burhan, said he will “uproot the regime,” dissolve provincial governments, end the curfew, respect human rights, release political prisoners, and try those who had killed protesters.

So what exactly will happen in Sudan?

As things stand right now, Bashir is under house arrest, but the military council will not extradite him to the International Criminal Court. Bashir’s National Congress Party says the coup was unconstitutional, but he most likely will not return to power.

Bible prophecy suggests the following as possible outcomes in Sudan:

The particular prophecy suggesting these outcomes is Daniel 11:40-43: “And at the time of the end shall the king of the south push at him: and the king of the north shall come against him like a whirlwind, with chariots, and with horsemen, and with many ships; and he shall enter into the countries, and shall overflow and pass over. He shall enter also into the glorious land, and many countries shall be overthrown: …. He shall stretch forth his hand also upon the countries: and the land of Egypt shall not escape. But he shall have power over the treasures of gold and of silver, and over all the precious things of Egypt: and the Libyans and the Ethiopians shall be at his steps.”

In this prophecy, as Trumpet editor in chief Gerald Flurry explains in his free booklet The King of the South, the king of the south represents radical Islam led by Iran—Sudan’s once-upon-a-time chief partner in crime. The king of the north represents a European power. Egypt, the Libyans and the Ethiopians represent a sizable part of northeast Africa and the Horn of Africa region. Ancient Egypt included parts of Sudan, and ancient Ethiopia included southern Egypt, northern Sudan, Eritrea, Djibouti and western Yemen. These regions have been destabilized by radical Islam in recent times and remain vulnerable to more of its destabilizing influence in the near future.

In his July 2016 article “Mediterranean Battle Escalating Into World War III!” Mr. Flurry asked his readers rhetorically why Iran would be interested in this region. “All you need to do is get a good map of the Middle East with the emphasis on the Mediterranean Sea and the Red Sea,” he wrote. These countries “border the two seas that comprise the most important trade route in the world.”

Iran already dominates the Persian Gulf. Now it is working to take over the Red Sea—you can see this by how involved it is in Yemen. Iran also has a heavy influence in Somalia. It has had a long-standing relationship with Sudan, and prophecy tells us it will gain control of Ethiopia and Egypt. Egypt controls the Suez Canal, which is the gateway to the Mediterranean Sea.

Putting this together, you can see that Iran seeks to control the greatest trade route in the world!

Right now, Iran is under the heavy pressure of sanctions imposed on it by the Trump administration. But as some analysts have warned, Iran has the potential to increase its influence in this region, even if it might hurt a little.

Even when the protests in Sudan started in December, Geopolitical Futures warned that Iran was still one of the regional powers that was “paying close attention to the outcome” of that crisis. “The Red Sea coastline has proved alluring to Iran,” it noted.

In this desperate situation, Sudan could abandon its allies and turn again to Iran for help. There’s no guarantee that Iran, itself in an economic crisis, would agree to aid Sudan, though this would provide it an opportunity to acquire another sphere of influence at a relatively cheap price. But it’s a vicious cycle. Stabilizing a country controlled by the military means losing the chances of becoming a democracy, while anyone waiting for the democratic process to bear fruit is liable to lose the entire country.

Keep watching Sudan. Remember what Bible prophecy says about Sudan, North Africa, the Middle East and Europe. Our free booklets The King of the South and Libya and Ethiopia in Prophecy can guide you through the Bible passages describing this key prophecy.

This prophecy is actually an end-time prophecy that points to the start of a new era of world peace and political stability—because of God’s direct, hands-on intervention. Part of the conclusion of that prophecy is Daniel 12:1-3: “And at that time shall Michael stand up, the great prince which standeth for the children of thy people: and there shall be a time of trouble, such as never was since there was a nation even to that same time: and at that time thy people shall be delivered, every one that shall be found written in the book. And many of them that sleep in the dust of the earth shall awake …. And they that be wise shall shine as the brightness of the firmament; and they that turn many to righteousness as the stars for ever and ever.”