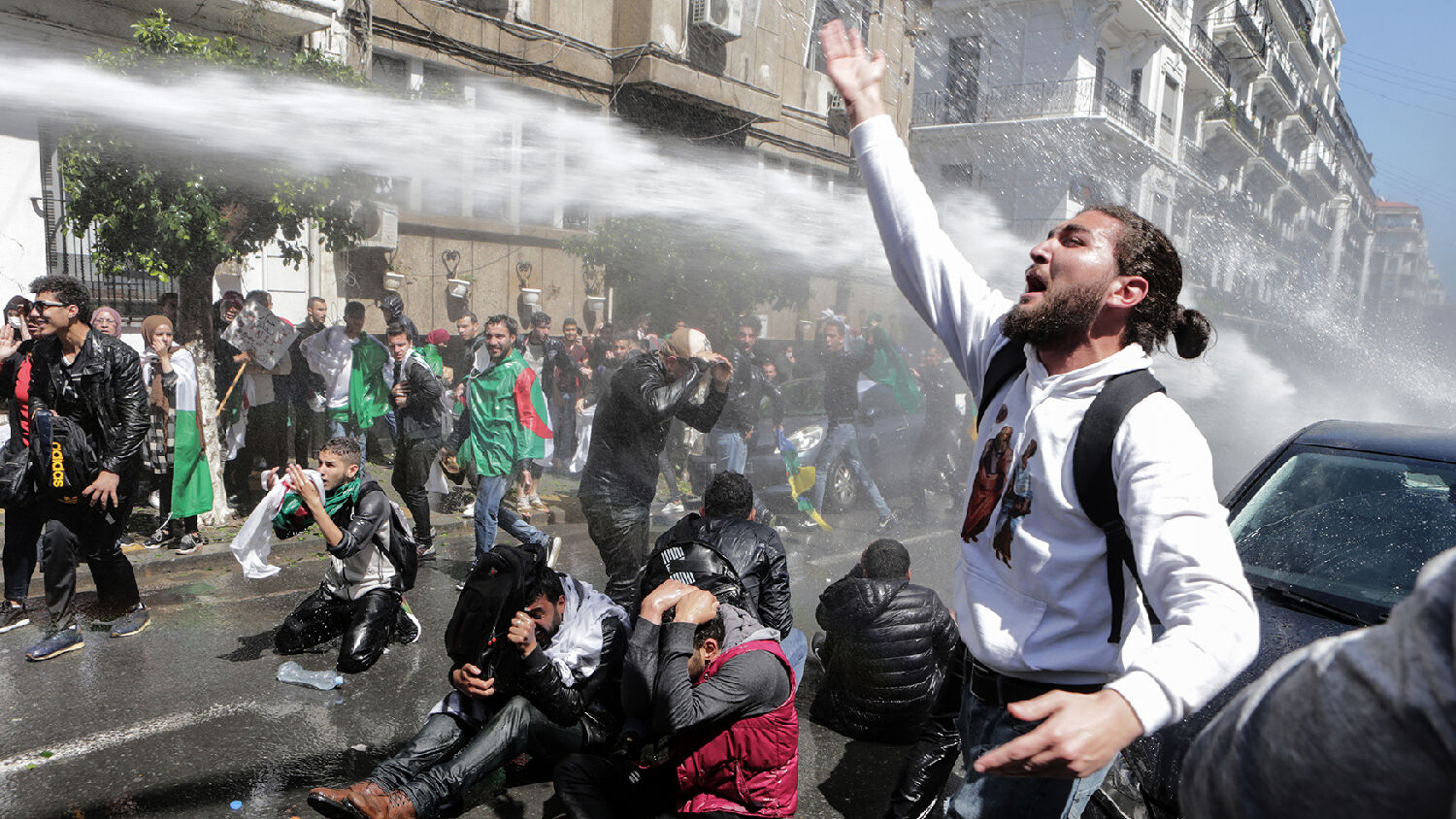 Last week, I wrote to you about how Algeria could explode. This week, the timer has ticked closer to zero. North Africa is smoldering. An eruption anywhere in this region could set off a chain reaction igniting a landmass larger than the United States.

A stream of migrants from one conflict zone could destabilize the next country over. The collapse of a government could give terrorists free rein to set up bases and carry on the fight in surrounding countries.

Sitting on top of this time bomb is Europe. The migrant crisis stemming from the Syrian civil war is already weakening the European Union toward a breaking point. If North Africa erupts, the EU’s fuel supplies, trade routes and society itself will be threatened.

An explosion in North Africa could affect Europe and, therefore, the entire world.

Libya has been in chaos since 2011. But that chaos has been far less destructive than it could have been. Last year, around 1,500 people were killed in the fighting. That’s tragic, but it’s dwarfed by the 20,000 people killed in Syria and over 28,000 in Yemen over the same time.

Until last week, the Libyan government was locked in a stalemate. The Government of National Accord (gna) controls the capital Tripoli and is backed by the United Nations, the European Union and the United States. But the Libyan National Army (lna), under Gen. Khalifa Haftar, controls most of the rest of the country and is backed by Russia, with support from Italy and (unofficially) France.

Meanwhile, terrorists—including the Islamic State—are exploiting this divided government and other weaknesses where they can and seizing pockets of territory.

But last Thursday, Haftar marched on Tripoli. This threatens to unleash fighting on a whole new scale. The U.S. has withdrawn the small number of marines it had posted in Tripoli, and as I write this, Haftar’s forces have just acknowledged launching an air strike on Tripoli’s only working airport. But gna forces are putting up strong resistance.

“The conflict in Libya has entered a new phase,” Stratfor warned yesterday.

“With their forward progress halted, it’s unlikely that Haftar’s forces will be able to take full control of the capital any time soon, leading to a high probability that the battle will become a protracted affair,” Stratfor wrote. “[W]ith Haftar’s forces stretched thin, rival militias and terrorist groups in the territory the lna already had seized, such as in Benghazi, will have the opportunity to regain a foothold.”

“The chaos emerging from another full-scale conflict could allow the Islamic State to restrengthen as political crises continue in Algeria and Sudan,” Stratfor wrote.

Which brings us to Libya’s western neighbors.

In Algeria, protests against the government continue, despite President Abdelaziz Bouteflika’s resignation. As I wrote last week, the demonstrators don’t just want a new figurehead; they want a new regime and system of government.

And the stirrings of unrest are spreading to Tunisia.

Thus far, Tunisia has been the Arab Spring’s only success story. Under President Beji Caid Essebsi, the Tunisians barely kept the Islamists out. But the country’s economy has struggled, needing a bailout from the International Monetary Fund, and all the restrictions on spending that go with it.

Over the weekend, Essebsi announced that he would not stand for a second term, meaning his presidency will end in the autumn. His announcement came as movements on social media began to call for his ouster, inspired by the events in neighboring Algeria. There are no high-profile replacements for Essebsi on the horizon, and his party has asked him to stay.

Tunisia’s number two party is Ennahda, an Islamic party inspired by the Iranian Revolution and the Muslim Brotherhood. In 2016, it declared itself a part of “Muslim democrats.” How the party would behave if it has the chance to take power remains to be seen. The results of the Arab Spring in just about every other country show there’s plenty of scope for radical Islam in Tunisia.

Southeast of Libya, another regime is under siege. Sudanese President Omar al-Bashir has been fending off demonstrations since the end of 2018. But now they’re more threatening than ever before in his 30 years of rule.

Conflicting reports have been coming out of Sudan, but it appears that on Saturday, activists marched on the compound containing the Defense Ministry and presidential palace. They were trying to turn the army against Bashir. It’s unclear if they were successful. Reuters reported today:

On Monday, riot police and intelligence service personnel charged the demonstrators with pickup trucks while firing tear gas, but witnesses and activists said soldiers moved to protect the protesters.

The Times of London is reporting that security forces have split, with some defending the protesters and other supporting the president. The protests continue, with the following picture spreading widely on social media:

The United Kingdom, U.S. and Norway have called on Bashir to step down—for good reason, he is a horrible individual. He is the only sitting head of state indicted by the International Criminal Court for genocide, crimes against humanity and war crimes.

At the same time, the consequences of a collapse in Sudan would be severe: dramatically increased refugee numbers and a perfect base for terrorists to attack targets in North and West Africa. This is why the EU works with and even pays this wanted war criminal. As the Economist pointed out, if Bashir goes, the wave of unrest could simply grow stronger:

Events in Sudan will be watched nervously by Mr. Bashir’s fellow Arab leaders, who fear a second phase of the Arab Spring that swept away several of them in 2011. Protesters in Algeria have recently forced the resignation of their ailing president, Abdelaziz Bouteflika. Who might be next?

A Pattern of Instability

These are just the flare-ups that have occurred in the last few days. There are other major risks of a conflagration. In Mali, nearly 90,000 have been forced to flee since January as tribal militia and armed groups continue to clash in the country’s northern and central regions. On March 23, more than 150 Fulani villages were attacked, probably by the rival Dogon tribe.

Meanwhile, the UN Refugee Agency said today that it is worried about the spike in attacks in southeast Niger, warning, “The beginning of the year has brought a resurgence of violent attacks by Boko Haram, targeting security and defense forces as well as the civilian population in the region of Diffa, near the Nigerian border.”

All these areas have tension and major problems that aren’t going away quickly. Having several hot spots all smoldering at the same time means the risk of an explosion is especially high. But even if things settle down, the big problems remain.

This region is on the brink of an explosion. Your Bible prophesies this explosion, as well as its ultimate outcome.

Daniel 11:40-45 is a prophecy for “the time of the end.” And so much of the events it describes revolve around North Africa.

That’s a huge shift. Egypt is against Iran right now. Ethiopia is a Christian country.

But the potential for dramatic change is clear.

This passage also says Europe will be involved in the region. Verse 40 states that this European power will attack “like a whirlwind.” Mr. Flurry explains in “The Whirlwind Prophecy” that in this verse “the emphasis is on the strategy of this military attack.”

“If you’re in a whirlwind, it whirls all around you,” he continues. “It whirls you away! [Y]ou can see the German strategy: to surround Iran and its allies. …

“The king of the north couldn’t come like a whirlwind unless it surrounds Iran and its allies. That is being meticulously planned right now! Germany is busy preparing to execute a whirlwind strategy to rush upon and overflow Iran.”

Part of that coming storm is forming in North Africa. Germany is a major contributor to the EU’s military mission in Mali. German generals have talked openly about the need for Germany to prepare to project force into Libya. Chairman of the German Federal Armed Forces Association Lt. Col. André Wüstner said that radical Islam has created a “ring of fire” that extends “from Afghanistan via Yemen, Syria and Iraq to Africa” and that Germany must be prepared to confront it. In other words, Germany needs to surround these outbreaks of radical Islam.

Europe is being drawn into North Africa, just as the Bible said it would. It has little choice. Unless it wants to let millions of migrants destabilize its political system and its society, it has to be involved in the region just across the Mediterranean Sea.

Perhaps the biggest danger to Europe comes from Egypt. It has a population larger than Algeria, Sudan and Libya combined. It is one of the leading nations in the volatile region. Egypt has already proved vulnerable to radical Islamists. If Egypt allies with Iran, it will rock Europe’s world. Mr. Flurry wrote in 2012:

The emphasis here in verses 42 and 43 is on Egypt—then we have Libya and Ethiopia. This shows that Egypt is the big conquest! It is the real power behind Libya and Ethiopia, which suggests that it is going to have a heavy hand in swinging those two nations into the Iranian camp.

Put simply, this means that we can expect Egypt—with Iran’s help—to lead Libya and Ethiopia into the Iranian camp!

The region is volatile and unstable, and Egypt will probably perform the coup de grâce that brings these countries around to Iran. But until then, the instability could mean some major headaches for Europe.

Events in North Africa tie into so many key Bible prophecies. The rise of Iran is clear. The migrant crisis is helping to foment major political change in Europe. Part of the reason France is so keen to empower Germany is because it needs Germany’s military to help it in North Africa.

There are numerous reasons to keep watching the region. But the most important comes from the book of Daniel. The culmination of the chain of events in Daniel 11 is that one “like the son of man” is given “dominion and glory and a kingdom, that all people, nations, and languages should serve him” (Daniel 7:14).

The events of Daniel 11 serve as a countdown to this event—the return of Jesus Christ to Earth. As Christ Himself said, we need to watch these events (Matthew 24:42).

For a more thorough explanation on what the Bible says about North Africa, and how the clash that takes place here leads to the return of Jesus Christ, read Mr. Flurry’s free booklet Libya and Ethiopia in Prophecy.