Egypt has transformed into a radical Islamist state. What will be the consequences? 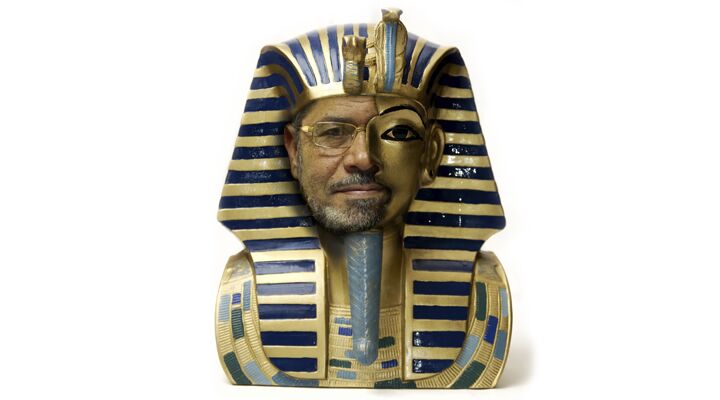 Egypt has transformed into a radical Islamist state. What will be the consequences?

Give Egyptian President Mohammed Morsi credit. In August, as the world fretted over Syria, debated U.S. presidential candidates and watched the London Olympics, Morsi smoothly orchestrated the most significant development in Egypt since the assassination of Anwar Sadat in 1981.

Watching Morsi work was a sight to behold. In a matter of mere weeks, he: 1) severed Cairo’s three-decade allegiance to the U.S.; 2) wrested control of the government away from Egypt’s Supreme Council of the Armed Forces; 3) appropriated for himself the power to influence the country’s new constitution; 4) established Egypt as Iran’s most powerful regional ally, literally embracing Iranian President Mahmoud Ahmadinejad; 5) delivered the Suez Canal and the Red Sea into the hands of Iran and radical Islam; 6) began courting China to replace the U.S. as his bankroller; and 7) trashed Egypt’s historic and pivotal peace treaty with Israel, the 1978 Camp David Accords. He did it all before his presidency was two months old—and he’s still on a roll.

In geopolitical terms, Morsi shifted the entire balance of power in the Middle East. In prophetic terms, he thrust the region and the world one giant step closer to World War iii.

The new president’s first major move occurred on August 12, when he announced that he had “retired” a handful of key leaders within Egypt’s military establishment, the Supreme Council of the Armed Forces (scaf). The men included the defense minister, the army chief of staff, and the commanders of the navy, air defense and air force. Virtually all these heavyweights were holdovers from the previous administration under President Hosni Mubarak. They were relatively pro-Israel and pro-Western, key intermediaries between Egypt and America. More importantly, they were political and ideological counterweights to Morsi and the Muslim Brotherhood.

Ever since Mubarak’s ouster in February 2011, Western experts insisted that as long as thescaf held key government positions, there was no reason to fear Morsi and the Muslim Brotherhood groundswell he rode into the presidency. “For decades, Egypt’s military served as America’s prime channel of engagement with Cairo,” Nathan Guttman wrote in Forward, an American Jewish newspaper. “When the Mubarak regime came to its end, the administration was reassured by the fact that the nation’s transition was overseen by the military through thescaf. [Former Egyptian Defense Minister Mohamed] Tantawi’s long-standing relations with American generals and civilian officials made him Washington’s go-to man even after the Muslim Brotherhood won the country’s first democratic elections and Morsi became president” (August 18).

Today, these bulwarks are gone.

Information on their successors is sparse, but the fact that Morsi handpicked them suggests they have been vetted by the Muslim Brotherhood. Egypt’s new defense minister, Gen. Abdel-Fattah al-Sissi, is reported to be either a member of the Brotherhood or have close ties to it. One thing is sure: Morsi has radically limited the influence of his opponents.

“This is a big moment of transformation in the history of Egypt,” said Zeinab Abul-Magd, history professor at the American University in Cairo. “Now, officially, [Egypt] is a Brotherhood state. Now it is official they are in full control of state institutions.”

Following Mubarak’s ouster and the election of a new parliament (December/January 2011), the scaf created new laws to limit the ability of either the president or Islamists in parliament to dictate Egypt’s new constitution.

Morsi nullified this new constitutional declaration on the very same day he fired Egypt’s military leadership, and replaced it with a declaration of his own. Unsurprisingly, it equips Egypt’s president with wide-ranging legislative and executive powers, as well as a leading role in drafting the new constitution. The job of writing Egypt’s new constitution will undoubtedly be led by an individual faithful to Mohammed Morsi, the Muslim Brotherhood and radical Islamist ideology.

The message from Morsi August 12 was clear: The one who decides how much power Morsi has—is Morsi.

“The decisions of August 12 make Morsi the new pharaoh of Egypt,” warned Salah Eissa, editor in chief of Egyptian newspaper Al-Qahira. “After ridding Egypt of a military dictatorship, we are about to see it replaced by an Islamist one.”

Where are those who condemned Mubarak for being dictatorial and supported his overthrow? Why aren’t they calling for Morsi’s head?

After he sacked his political opponents and augmented his presidential powers, Morsi wasted no time in laying out what he plans to do with his power as he revealed Egypt’s new foreign-policy objectives.

On August 14, the president visited Saudi Arabia for an emergency summit of the Organization of Islamic Cooperation to discuss the crisis in Syria. The Al-Ahram Weeklyrevealed ahead of the summit that Morsi and Ahmadinejad were scheduled to talk on the sidelines of the meeting.

Official footage of Morsi’s arrival showed him greeting the summit’s host, Saudi King Abdullah. The camera cut away to show the arrival of other dignitaries. When it cut back, Morsi and Ahmadinejad were hugging and air-kissing each other.

This is not insignificant. This is the first time in more than 30 years that the leaders of Egypt and Iran have embraced like this!

President Mubarak refused to even speak with Iran’s leaders. After Egypt signed the peace treaty with Israel in 1979, Iran cut off relations with Cairo. At the time, Egyptian President Anwar Sadat was a resolute enemy of Iran’s Islamist regime. He called Iran’s Ayatollah Ruhollah Khomeini “a lunatic” and “a disgrace to Islam,” and he welcomed Iran’s exiled shah, Mohammad Reza Pahlavi, to live in Egypt. Soon after, Sadat was assassinated. Khomeini proclaimed his killer a martyr, and Iran named a street in Tehran after him. The two states were archenemies.

Now Iran and Egypt are warmly embracing each other!

But Morsi wasn’t done cozying up to Iran. The next week, he traveled to Tehran to participate in a meeting of the Non-Aligned Movement. nam was created in 1955 during the Cold War to give support to the causes of the developing world. Today, the organization has 120 member nations claiming to not be aligned with any major world (Western) powers. Its purpose, as stated in the 1979 Havana Declaration, is to ensure “the national independence, sovereignty, territorial integrity and security of non-aligned countries.”

Before Morsi flew to Iran, Sabri Amer, a former leading Egyptian parliamentarian, told Iran’s Fars News Agency, “Morsi’s presence in Tehran conveys this message to the U.S. and Israel, that the era of Egypt’s political obedience to Washington and Tel Aviv has ended.” In the interview, Amer lamented that while Mubarak was in power between 1981 and 2011, “all the decisions and policies in both areas of domestic and foreign policy were made through coordination with the U.S. and the Zionist regime.” But now the conditions have changed, he proudly stated, “and the era of the ruling of the Egyptian regimes which were allies and loyal to the West has ended.”

Just before Morsi’s visit, Ramzy Ezzeldin Ramzy, Egypt’s assistant foreign minister for economic affairs, stated, “Egypt in its new conditions wants establishment of the best relations with all the world countries, including Iran ….“

Egypt’s gravitation toward Iran is a game-changing development for Iran and radical Islam. Egypt is the largest Arab state in the Middle East. It possesses enormous stockpiles of advanced U.S.-manufactured weapons. It controls one of the most important sea lanes in the world. And it controls the southern border of the Jewish state.

And now, thanks to Mohammed Morsi, Iran can count Egypt as a friend and ally.

One of Morsi’s most significant moves occurred two days after he fired the military leaders and set himself up to rewrite the constitution. On August 14, Mohamed Gadallah, Morsi’s chief legal adviser, told an Egyptian newspaper—no doubt at the president’s behest—that Morsi was currently “studying” the possibility of revising the 1979 Egypt-Israel peace treaty. Morsi wants Egypt to “implement its full sovereignty over the Sinai Peninsula,” he said. Yes, this contradicted Morsi’s many promises that he would respect all international treaties signed by Egypt.

That statement is a big step toward World War iii!

Israel’s survival as a sovereign country depends heavily on Egypt’s willingness to uphold the Camp David Accords. As Stratfor ceo George Friedman observed a few years ago, “The only thing that could threaten the survival of Israel, apart from a nuclear barrage, would be a shift in position of neighboring states. [And] the single most important neighbor Israel has is Egypt“ (June 19, 2007).

On August 22, Ahmad Sabi, key adviser to the Freedom and Justice Party—an Islamist party connected to the MB—stated: “I support amending the Camp David Accords, which is a mark of shame upon the Egyptian people. This agreement has been a heavy burden … undermining Egypt’s sovereignty” (memri, September 3).

It was not a coincidence that this news leaked just after several Islamist terrorist attacks occurred in the Sinai Peninsula. Under the Camp David Accords, Israel agreed to withdraw troops from the Sinai in exchange for a peaceful relationship with Egypt. The agreement also limited the number of Egyptian troops in the region. But Morsi used the Sinai terrorist attacks as a pretext for marching back into the Sinai. The military began operations against the militants on August 8, and in the weeks that followed sent hundreds of troops into the Sinai, together with tanks and heavy equipment.

Obviously, this alarmed some in Israel. Israeli Foreign Minister Avigdor Lieberman called for Cairo to remove the tanks and aircraft it had deployed in the region. “Many Israel government officials are concerned that Egypt may be exploiting the anarchy in the Sinai to convince Israel and the United States it must maintain an armed presence with weapons and manpower beyond the limits stated in the 1979 peace treaty,” Arutz Sheva reported (August 19).

Remarkably, the U.S. seems unconcerned about this development—and virtually everything else Morsi has done. In fact, the New York Times reported that Washington is working with Morsi’s government to beef up security in the Sinai. America, it seems, is oblivious to the dangers of exposing Israel’s southern border to a hostile Islamic regime.

The influx of Egyptian troops and weaponry into the Sinai is already reality. Next will likely come the revision of the Camp David Accords, then a complete occupation of the Sinai Peninsula by a radical Islamist who is forming a partnership with the king of radical Islam.

Pay close attention to events in the Sinai. The call for full sovereignty over a demilitarized region like the Sinai is startlingly reminiscent of another anti-Jewish radical. On March 7, 1936, Adolf Hitler delivered a speech in the Reichstag in which he announced that “Germany no longer feels bound by the Locarno Treaty.” Established in 1925, Locarno delineated postwar territorial boundaries in Europe. After he renounced Locarno, Hitler dispatched troops to retake the Rhineland—then Austria—then the Sudetenland—then Poland. We all know what happened next.

Watch Egypt closely. Mohammed Morsi has shed his moderate cloak and revealed himself for what he really is: a devoted Muslim Brotherhood member and an anti-democratic, anti-Israel, anti-Western, radical Islamist determined to oversee an Islamist renaissance in Egypt and the consolidation of Egypt as a radical Islamist state. That is, a man with the skill and power to help set off world war!