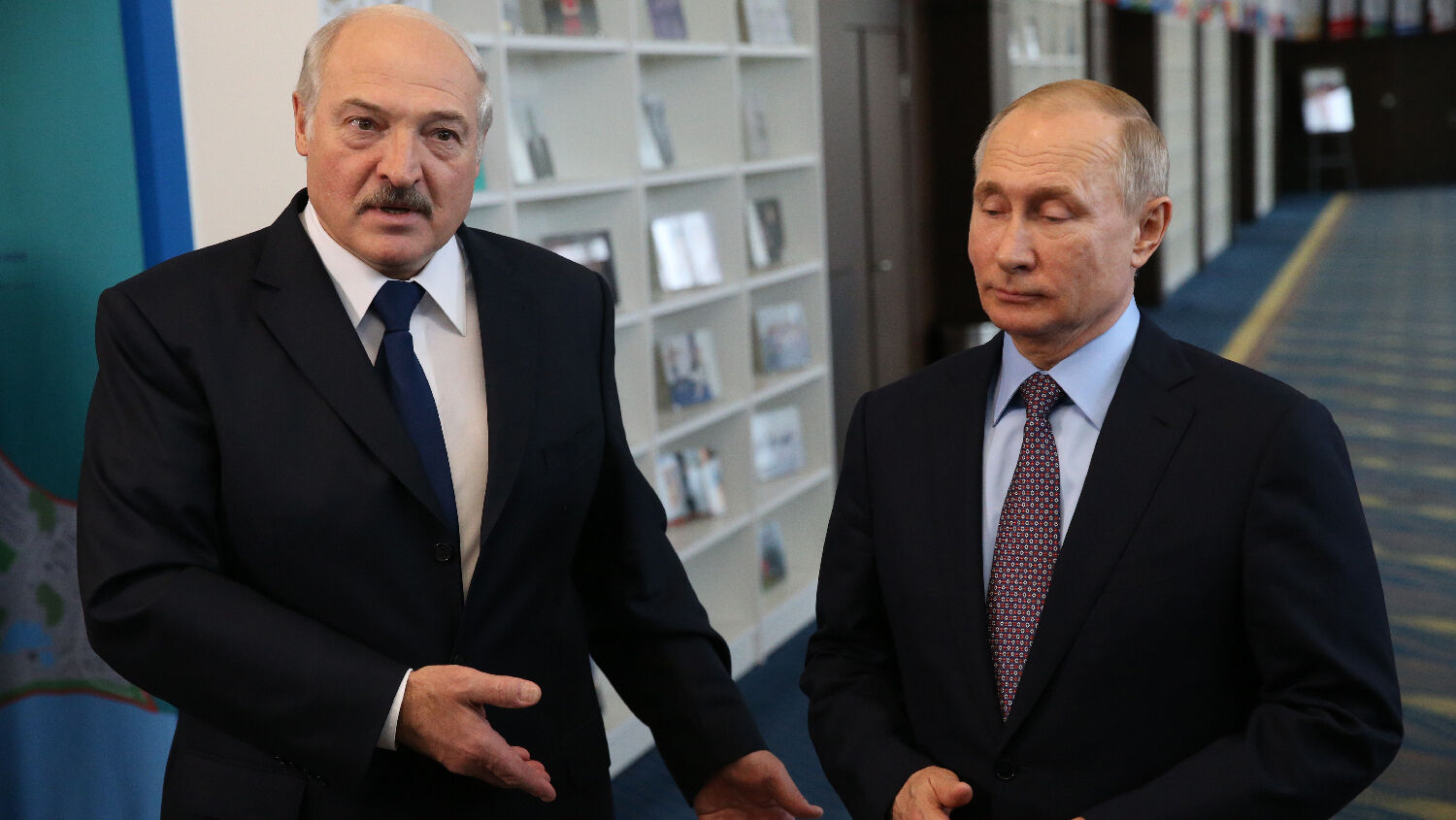 Even if the people of Belarus do not desire it, the world’s most powerful dictator has several good reasons to make it happen.

“The two of us could unite tomorrow, no problem,” Lukashenko said in a video posted by Kremlin reporter Dmitry Smirnov. “We’re ready to unite and consolidate our efforts, states and peoples as far as we’re ready.”

It is true that Lukashenko has built a reputation over the years of skillfully resisting political and economic pressure from abroad, partly with statements that sound conciliatory but are largely empty. And in his recent remarks, he was careful to add that such a merger would only happen if the Belarussian people are “ready for it,” which is something both sides know is not presently the case.

But Lukashenko’s remarks still deserve attention because, in a world of rising authoritarianism, the “will of the people” matters less and less.

In our January 2018 issue, Trumpet executive editor Stephen Flurry wrote about the shift toward authoritarianism. “For nearly two centuries, the dominant geopolitical trend in the world was the spread of democratic, free societies,” he wrote. “This century will be totally different. The dominant trend thus far has been the rise of authoritarian strongmen.”

Having kept an iron hold on the Belarusian presidency since 1994, Lukashenko is an authoritarian in his own right. But Putin is the man to watch in this situation. He is the heavyweight in the dynamic, and has a tight grip on Russia, and also a considerable one on Lukashenko and all of Belarus.

Putin also has three solid reasons to want to bring Belarus officially under his control, and Lukashenko’s statements may indicate that Putin has decided to soon act on them.

First, Putin has called the collapse of the Soviet Union “the greatest geopolitical catastrophe” of the 20th century, and he longs to rebuild it.

The Soviet Union included Belarus, Ukraine, Georgia and 11 other republics situated in the Russian periphery. It brought the peoples of these nations under the control of the Russian leadership. Putin wishes the Soviet Union never fell. He longs for the days when all those nations were forged into one under the Soviet hammer. And he has been actively working to rebuild it. Putin’s 2008 invasion of Georgia, which puts 20 percent of the country under Russian control, was part of these efforts. His 2014 annexation of Ukraine’s Crimean Peninsula and slicing off the country’s southeast was also part of the rebuilding strategy.

As for Belarus, it is already deeply linked to Russia. The two militaries have intimate relations. Belarus is a member of the Collective Security Treaty Organization (csto) and the Eurasian Economic Union (eeu), both instruments of Russian power. The two nations have even worked toward full-scale unity by forming a “commonwealth” 20 years ago called the Union State of Russia and Belarus. It is clear that in several significant but unofficial ways, Belarus is part of Russia. But in Putin’s quest to rebuild the Soviet Union, “unofficial” may not always be enough.

Rally ‘Round the Flag

Second, Putin would like to give Russians cause to celebrate his rule once again. A January poll by the Moscow-based Public Opinion Research Center found that the Russian people’s trust in Putin had fallen to 33 percent—its lowest level in 13 years. “That rating is more socially significant in Russia than it would be elsewhere,” George Friedman wrote for Geopolitical Futures. It could indicate “deep discontent arising” among the Russians, he wrote.

The number has slipped from its peak partly due to decreasing household incomes and a contentious decision by Putin’s government to raise the retirement age to a figure just over the average man’s life expectancy. “I remind you: 43 percent of males in Russia will not live until their retirement age!” one Russian citizen tweeted after learning the news.

But the Russian people are inclined to forget their personal suffering and grievances with the government if they see the nation acting forcefully abroad.

In 2006 and 2007, Putin’s popularity and trust ratings were worryingly low. But after Russia invaded Georgia in 2008, those numbers surged.

Over the next few years, the numbers slowly declined. But again, in 2014, after Putin’s annexation of the Crimean Peninsula, they soared into the stratosphere. His trust rating peaked at 71 percent—more than double the current figure.

Putin well knows this recent history and the correlation with his popularity. He understands that his primary achievement in the eyes of average Russians has been “making Russia great again” with aggressive foreign policy moves. If his numbers continue falling, he may calculate that the best way to reverse the trend is by bringing Belarus officially under Russian control.

This would be particularly important if Putin decides to hand over some of the disputed Kuril Islands to Japan in order to make peace and thereby unlock massive Japanese investment into Russia. Giving the Kurils away would be wildly unpopular among Russian nationalists, but the move could be more than offset if Russia were to simultaneously absorb Belarus.

The Russian Constitution says the president may serve no more than two consecutive terms. This means Putin will theoretically be obligated to step down when his present term ends in 2024.

But Putin, like most authoritarian leaders throughout the ages, relishes his power and will seek to prolong it. This is partly because going into retirement would be risky, since he could never be sure of any personal security promises his successor may make to him. It is also partly because, in the words of author Richard Risch, “Tyrants are willing to commit to anything … including mass murder, to maintain their domination.”

And for Putin, the constitutional limitation is an obstacle only on paper.

He already sidestepped it once back in 2008. After completing two consecutive four-year presidential terms, Putin handed the presidency over to his subservient protégé, Dmitry Medvedev, and stepped into the office of prime minister. During this time, Putin continued operating as the ruler of Russia in all but official title, essentially using Medvedev as a puppet. Also in 2008, the government extended the presidential term to six years, effective upon the next election. In 2012, Putin returned to the presidency with a newly extended six-year presidential term. His rule over Russia was official once again, and he won a second six-year term last year.

When his current term ends in 2024, there is a chance Putin will orchestrate another rendition of this “castling move” with Medvedev or some other trusted protégé. There is also a chance that Putin will amend the Constitution so that he can stay in power after 2024.

But both moves are politically risky. And with Belarus, there is another option available.

Back in 1997, Lukashenko and Putin’s predecessor, Boris Yeltsin, signed the framework treaty for the Union State of Russia and Belarus. A 1999 update of the deal describes what is basically a federation of two states, with a single flag, a single currency, a common market and an integrated judiciary. The deal stipulates that the Union is to be governed by a Supreme State Council, with the presidents of the two countries taking turns as head “unless they agree otherwise.” Since 2000, Lukashenko has led the Union, but both sides have thus far prevented it from having much actual power or relevance.

If Putin took the reins of the Union State of Russia and Belarus, he could imbue the entity with real power. By taking charge of a vastly strengthened Supreme State Council, Putin could potentially become more powerful than whomever may succeed him as Russian president—and all without having to amend or sidestep the Constitution.

The Bible Foretells a Russian ‘Prince’

The Trumpet carefully watches Vladimir Putin and his grip on power because of what Bible prophecy says about his role in end-time events. Around the year a.d. 90, the Apostle John was inspired to write a sobering prophecy: “And the number of the army of the horsemen were two hundred thousand thousand: and I heard the number of them” (Revelation 9:16). This is discussing a military force of 200 million soldiers, which is more people than were alive at the time this was written.

The Scriptures provide several important details about this largest armed force ever amassed. Revelation 16:12 labels the force as “the kings of the east,” showing it to be a group of mainly Oriental countries. A prophecy in Ezekiel 38:2 mentions a “prince of Rosh, Meshech, and Tubal” (Young’s Literal Translation). Meshech and Tubal are ancient names designating the modern Russian cities of Moscow and Tobolsk. And Rosh is a variation of an ancient name for Russia. Several encyclopedias and commentaries, such as the Jamieson, Fausset and Brown Commentary, recognize this.

Parts of this “prince of Rosh” prophecy have already been fulfilled, and Mr. Flurry believes Putin will remain in power to fulfill even more of it. So whether Putin retains power by becoming head of a Russia-Belarus union, alters or sidesteps Russia’s Constitution, or if the world descends into conflict before the question becomes pressing, the Trumpet believes Putin will be the main power over Russia during the most chaotic and violent period in mankind’s history.

Despite how it sounds, this is not all bad news.

In his booklet The Prophesied ‘Prince of Russia,’ Mr. Flurry writes that, though catastrophe looms on the horizon, there is profound hope at the heart of these prophecies about Russia. He writes that the fact Putin is now in power proves that the most hope-filled event in mankind’s history is near: “Mr. Putin’s warfare is going to lead directly into the Second Coming of Christ. … Vladimir Putin is a sign, literally a sign, that Jesus Christ is about to return!” he writes. “This is one of the most inspiring messages in the Bible.”

To understand these Bible passages and the danger and the hope that is tied into them, order your free copy of Mr. Flurry’s booklet The Prophesied ‘Prince of Russia.’