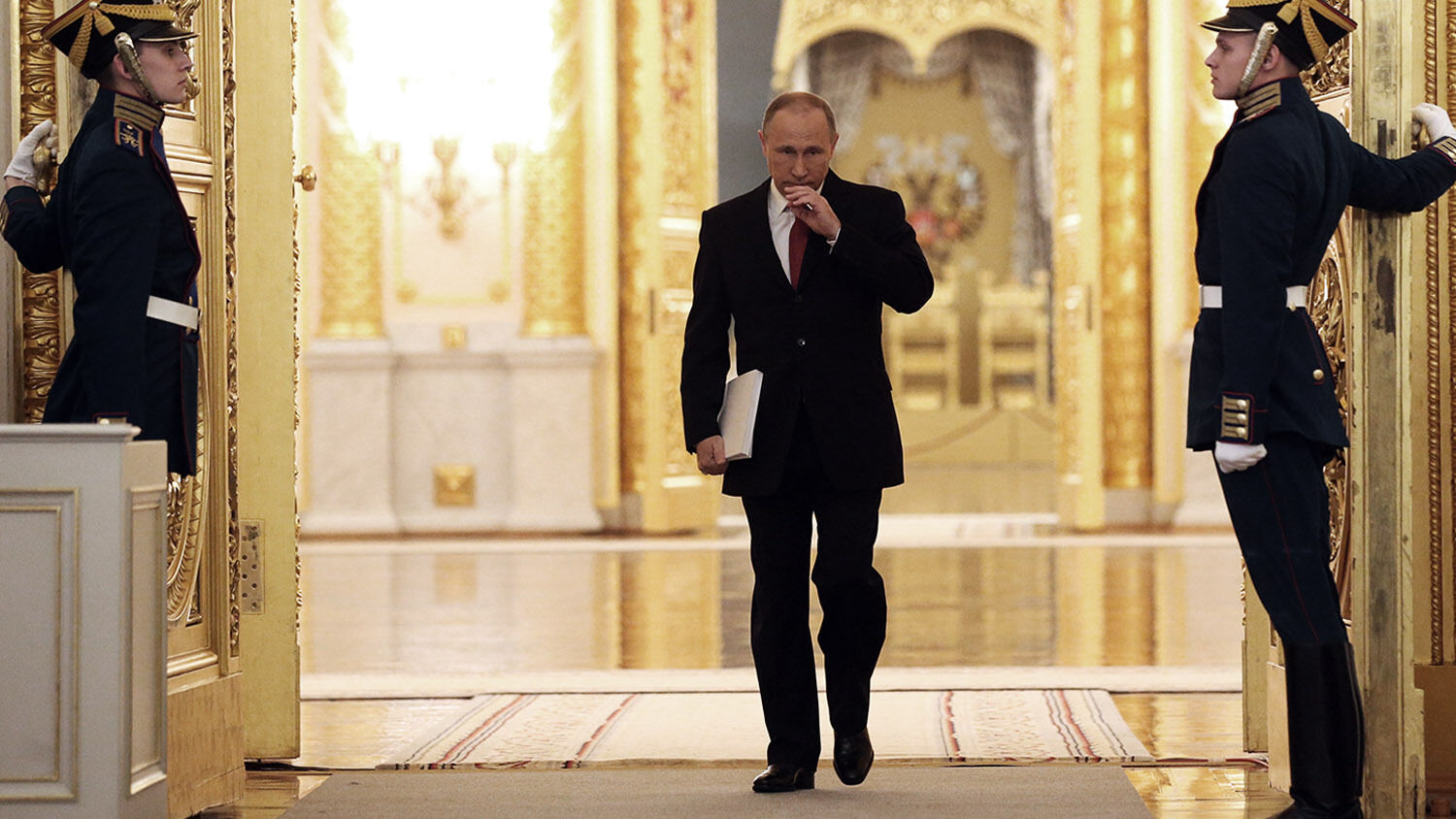 Russian officials discussed the idea on December 25 of revising the nation’s Constitution in a way that would allow President Vladimir Putin to remain in power after his current term ends.

During a meeting of the ruling United Russia Party, Vyacheslav Volodin, speaker of the State Duma, broached the issue. “There are questions in society, esteemed Vladimir Vladimirovich,” he said, addressing Putin in reverential fashion. “This is the time when we could answer these questions, without in any way threatening the fundamental provisions [of the Constitution].” He added: “The law, even one like the Basic Law, isn’t dogma.”

Volodin also reminded party members that the current Russian Constitution was written 25 years ago during a time when the people of Russia had “lost faith in the authorities.” The situation is different now. And he said the quarter-century anniversary may be a suitable time to reevaluate some aspects of it in light of new circumstances.

Vasily Kashin, senior research fellow at the Higher School of Economics in Moscow, spoke to the Trumpet about Volodin’s remarks on December 28. “The Constitution is criticized from all sides for a number of norms including, for example, the priority of the international law on the Russian national law,” he said, adding that “the current Constitution is hated by most nationalist and left-leaning groups.”

Putin himself seems to share in these sentiments toward the Constitution, and has circumvented its restrictions in the past. The most notable instance came in 2008, after he had served two consecutive four-year terms as president. The law says, “One person may not hold the position of Russian president for more than two terms in a row.” So for the next four years, Putin handed the presidency over to his subservient protégé, Dmitry Medvedev, and Putin became prime minister. But during this time, Putin continued to operate as the ruler of Russia in all but official title, essentially using Medvedev as a puppet. Also in 2008, Medvedev signed a law extending the presidential term to six years upon the next election. Putin won the 2012 presidential election, making his rulership official once again, and in March he was reelected for a fourth term, which means he remains president until at least 2024.

But last month, Putin seemed to open the discussion of changing the Constitution so that he could stay on after 2024. The Russian Constitution is “not some fossilized legal construct but a living, developing organism,” he said. During a press conference two weeks ago, Putin said any revisions to the Basic Law should be “a matter for broad civic discussion.”

Last week’s statements by Vyacheslav Volodin show that Putin’s subordinates are taking their cues from him, and possibly preparing the everyday Russians and the rest of the world for a constitutional change. The Kremlin’s tight grip on Russia’s political system means it could swiftly pass such a change if Putin supported it.

The Bible Foretells a Russian ‘Prince’

The Trumpet keeps a watchful eye on Vladimir Putin and his grip on Russian power because of what Bible prophecy says on the topic. Around a.d. 90, the Apostle John was inspired to write a striking prophecy: “And the number of the army of the horsemen were two hundred thousand thousand: and I heard the number of them” (Revelation 9:16). That is discussing a military force of 200 million soldiers, which is more people than were even alive on Earth at the time that John wrote.

Bible passages give several important details about this largest armed force ever amassed on Earth. Revelation 16:12 designates the bloc as “the kings of the east,” showing it to be a group of Asian countries. A prophecy in Ezekiel 38 provides still more information: “And there is a word of [the Lord] unto me, saying, ‘Son of man, set thy face unto Gog, of the land of Magog, prince of Rosh, Meshech, and Tubal, and prophesy concerning him” (verses 1-2; Young’s Literal Translation). Meshech and Tubal are ancient names designating modern Russian cities. And Rosh is a variation of an ancient name for Russia, once called Rus. Many encyclopedias and commentaries, such as the Jamieson, Fausset and Brown Commentary, recognize this.

The chapter discusses the exploits of the forces led by this “prince of Rosh, Meshech, and Tubal,” and also discusses the eventual defeat of this mighty power. So who is this powerful Russian “prince”?

In the September 2014 Trumpet, editor in chief Gerald Flurry gave the answer:

I strongly believe Vladimir Putin is going to lead the 200 million-man army. Just look at the power he already has. Can you think of any other Russian politician who could become so powerful and have the will to lead Russia into the crisis of crises? I see nobody else on the horizon who could do that. And only a tiny few years remain for the prince of Rosh to appear! … This much is absolutely certain: The restoring of Russia’s power by Vladimir Putin—the prince of Russia—was prophesied! He has already solidly allied Russia with China. The prophecy about the prince of Russia includes that main alliance.

Parts of this “prince of Rosh” prophecy are already fulfilled, and it seems likely that Putin will remain in power to fulfill even more of it. So whether Putin alters Russia’s Constitution or if the world descends into conflict before the question becomes pressing, the Trumpet believes he will be at the helm of Russia during the most tumultuous period in mankind’s strife-filled history.

But this is not all bad news.

In his booklet The Prophesied ‘Prince of Russia,’ Mr. Flurry writes that, though catastrophe looms on the horizon, there is great hope connected to these prophecies about Russia. He writes that the fact Putin is now in power proves that the most hope-filled event in mankind’s history is near: “Vladimir Putin is a sign, literally a sign, that Jesus Christ is about to return!” he writes. “This is one of the most inspiring messages in the Bible.”

Mr. Flurry continues: “What we are seeing in Russia ultimately leads to the transition from man ruling man to God ruling man! And it is almost here! It is just a few short years away.”

To understand more about both the danger and the hope, order your free copy of Mr. Flurry’s booklet The Prophesied ‘Prince of Russia.’