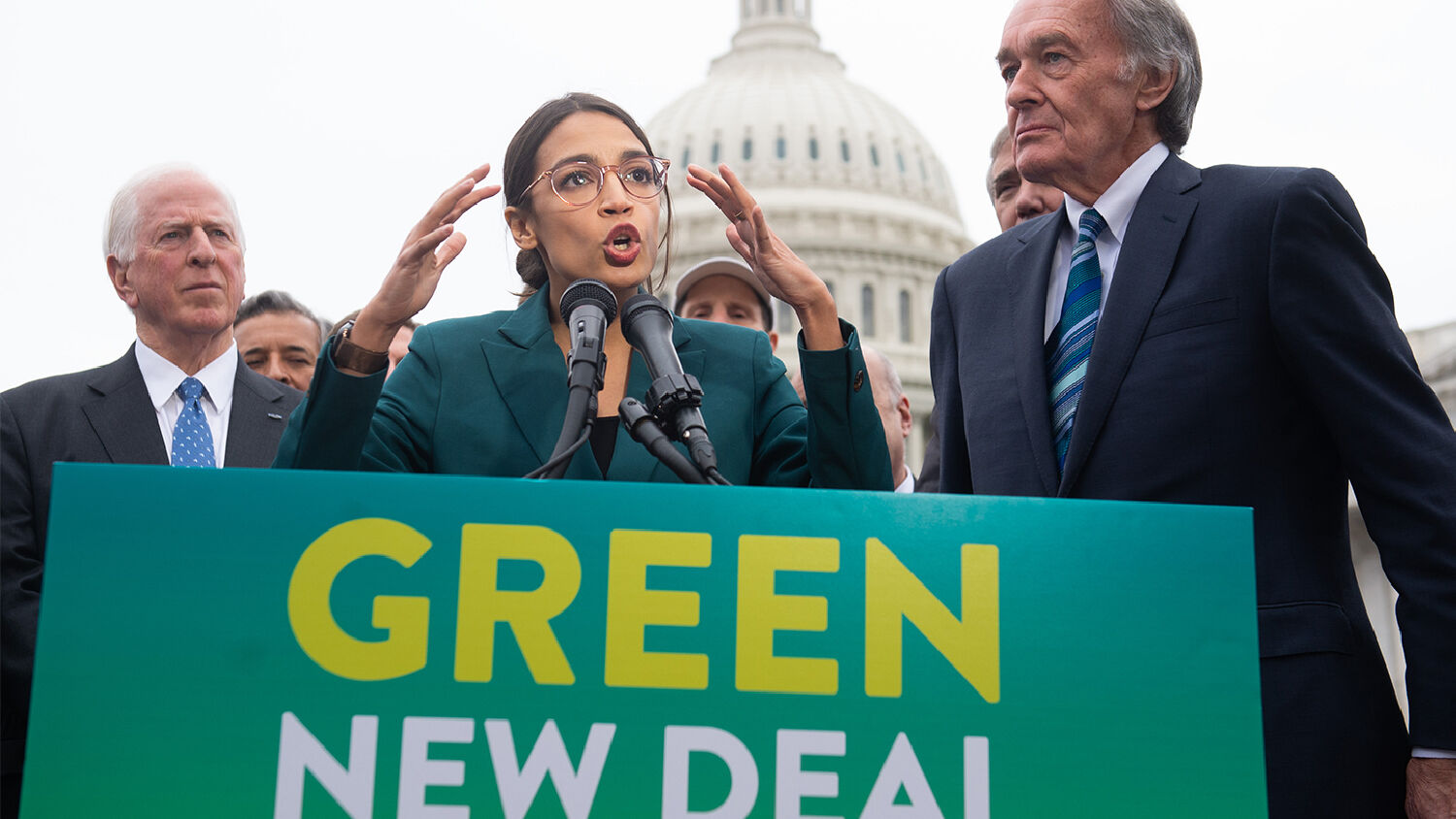 Current radical liberal economic ideas are not as unprecedented as you might think.

New York Congressional Rep. Alexandria Ocasio-Cortez has attracted attention for backing a program called the “Green New Deal.” Its purpose is to fight climate change by eliminating fossil-fuel-powered electricity, closing all coal and natural gas power plants, and transitioning the economy to 100 percent renewable energy by 2030.

To accomplish this utopian task, Ocasio-Cortez has proposed a jobs creation program that would “virtually eliminate poverty” and guarantee “a living wage job to every person who wants one.” Since the deal lacks specifics, its cost is hard to gauge. But if all of its provisions were carried out, the cost would certainly be in the tens of trillions of dollars—more than the moon landing, the highway system and the original New Deal combined.

Ocasio-Cortez does not like being asked how she would pay for this undertaking. She described the question as “disingenuous” in a January 6 interview with Insider, saying critics don’t ask questions about defense spending. She then explained that funds could be raised through deficit spending (spending more money than is received from taxes).

Elaborating on her point about deficit spending, Ocasio-Cortez said she was open to modern monetary theory, a radical economic concept stating that the government doesn’t need to balance the budget because budget surpluses (spending less than is received) actually hurt the economy by reducing consumption. This theory asserts that currency is a public monopoly, since the government can print money. So the only limit to spending should be concerns about inflation (a general increase in prices that happens when the purchasing value of money is diluted).

It is unlikely that every provision in the Green New Deal will be passed into law, and many condemn Ocasio-Cortez’s plan to pay for her programs by either printing or borrowing trillions of dollars. Yet as radical as it is, modern monetary theory is actually an extreme, overt declaration of the way the government has already been operating for decades.

The government has recorded budget surpluses only five times in the past 50 years. It is now over $22 trillion in debt, and the Congressional Budget Office estimates that annual federal deficits will average $1.2 trillion over the next decade (even without Ocasio-Cortez’s Green New Deal). When the government prints or borrows money that has not been earned and puts it into circulation, it dilutes the money supply and creates inflation.

Currently the inflation rate is low (below 2 percent), despite the nation’s exorbitant debt. That is largely because the dollar is the world’s primary reserve currency (meaning that many governments, institutions and individuals hold dollars as part of their foreign exchange reserves). Since so much of the nation’s debt is being held in reserve, these dollars are not diluting the supply of money in circulation. If America’s creditors lose faith in the dollar and start dumping their reserves into circulation, however, the inflation rate would increase dramatically, making goods and services cost more. This would drive up interest rates (since the dollar would be considered a less safe investment), thus making it prohibitively expensive for the government to borrow more money.

“As international payments are settled in U.S. dollars, there is always a demand for U.S. dollars,” Dr. Paul Craig Roberts explained in an interview with Sputnik News. “Other central banks keep their reserves in U.S. dollars. The demand for the reserve currency allows the reserve currency country to pay its bills by printing its currency. Its trade deficit is financed by other countries using the dollars they earn to purchase U.S. government debt.”

Despite what proponents of modern monetary theory say, America’s current rate of deficit spending is already undermining faith in the dollar as a reserve currency. That is why so many nations are starting to slowly dump their dollar reserves and buy gold. As the dollar loses its reserve currency status, the U.S. will lose its ability to print and borrow money without experiencing runaway inflation. Decades of budgetary mismanagement will catch up with the nation, allowing other nations to usurp its position of economic dominance.

The late Herbert W. Armstrong predicted that a massive financial crisis in America would lead to a catalyst prompting the nations of Europe to unite into a superstate. Specifically, he warned in 1984 that a massive banking crisis in America “could suddenly result in triggering European nations to unite as a new world power larger than either the Soviet Union or the U.S.” Mr. Armstrong based this prediction partly on financial conditions in America, but primarily upon Bible prophecy.

The Bible’s prophecies about this final resurrection of the Holy Roman Empire say that it will comprise a union of “ten kings” (Revelation 17:12). Ten leaders, representing 10 European peoples, will join together to forge a superstate more powerful than any Europe has seen for a long time. “These have one mind, and shall give their power and strength unto the beast”—prophetic language for a mighty political and military empire (verse 13).

What will cause these nations to unite so forcefully? It is very difficult to unite nations into “one mind”! That’s an incredibly challenging undertaking. But it is going to be done. In fact, it is taking place even now before our eyes.

Mr. Armstrong had profound insight in specifically forecasting that the catalyst for this dramatic unification would be a massive financial crisis that starts in America and ripples out from there. Look at conditions in America and the world today, and it is not difficult to see just how right he was!

A financial crisis that puts the dollar’s position as the world reserve currency in jeopardy could trigger runaway inflation and create a crisis that would practically force Europe to unite into a superpower capable of challenging America both economically and militarily. America’s $22 trillion debt is actually the biggest threat to its national security. Modern monetary theory is only making this threat more dangerous and leading to America’s ultimate economic collapse.

For a full picture of why God is allowing such a dramatic calamity to come upon the U.S., read The United States and Britain in Prophecy, by Herbert W. Armstrong.