Alarm bells sounded by the IMF recall a forecast made three decades ago about how a U.S. crash would affect Europe. 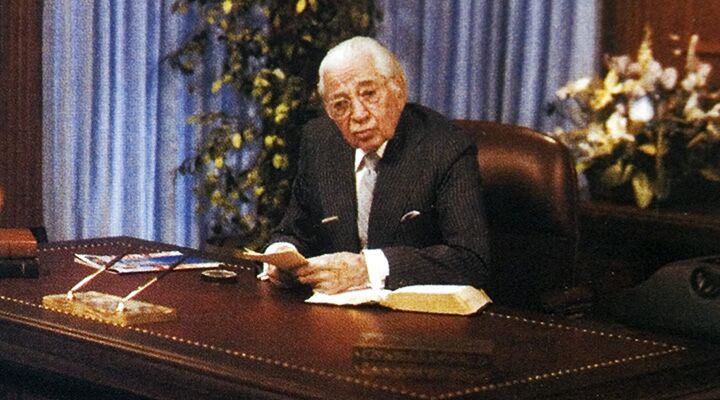 Alarm bells sounded by the IMF recall a forecast made three decades ago about how a U.S. crash would affect Europe.

The global financial system is unfathomably complex. Economies all over the world rely on it and participate in it, and we all depend on it. But most people know little about it. We just assume it will continue to function indefinitely.

But every so often, if we are paying attention, we get a small glimpse into this mystifying world. And what we see should make all of us tremble!

One of those glimpses occurred this past January, at the Davos Economic Forum. At this prestigious gathering, the International Monetary Fund (imf) issued a dire warning about America’s financial system that should have shaken the whole world, especially Americans. But the comments received very little press coverage. You need to pay close attention to what was said.

This warning recalled an important economic forecast made many years ago—one that I believe we are about to see come to pass in a dramatic way.

Herbert W. Armstrong had what I believe was the strongest religious program on radio and television for decades. He broadcasted on over 400 television stations and published a magazine with over 8 million circulation. He also met dozens of heads of state and other world leaders.

What do you know about shadow banking? Shadow banks are financial institutions that act like banks but are not regulated by the government the way banks are.

At the Davos forum in January, the imf said that shadow banking is putting America’s entire financial system in peril.

The Telegraph summarized: “Shadow banking now poses top risk to U.S. stability …. Non-financial lending has reached $15 trillion since the crisis and is outside the control of authorities warns the Fund’s deputy chief” (January 21;emphasis mine throughout).

“The U.S. shadow banking nexus is coming back to haunt like some hydra-headed beast and now poses the biggest potential threat to the American financial system, the International Monetary Fund has warned,” this article reported.

After the 2008 economic crisis, authorities drew up regulations, and Congress passed laws limiting the risky activity that helped spread the Wall Street meltdown. But according to the imf, these laws actually increased the risk of economic catastrophe!

“Zhu Min, the imf’s deputy chief, said regulators have successfully cleaned up much of the global banking system since the Lehman crisis, but the excesses have moved off books and are once again growing to disturbing proportions” (ibid). In response to the new regulations, the Wall Street banks simply shifted their risky activities off their books and into other institutions that are not under the jurisdiction of overseers. Even when some banks curtailed risky activity, other bank-like institutions sprang up to fill the void.

A lot of money and a lot of risk have migrated from government-regulated banks into the shadows!

Last July, Federal Reserve Chairman Janet Yellen said this about the shadow banking system: “We simply have to expect that when we draw regulatory boundaries and supervise intensely within them, that there is the prospect that activities will move outside those boundaries and we won’t be able to detect them. And if we can, we won’t have adequate regulatory tools.”

“That is a huge challengeto which I don’t have a great answer,” she said.

The imf is warning about this massive danger. And America’s number one banking authority admits there is a huge problem for which it has no solution.

Still, even with the U.S. economy and the world economy in such a precarious state, hardly anyone seems concerned! Americans know far more about the Super Bowl than about this super crisis threatening to destroy our financial system.

One of the greatest dangers to the economy lies in contracts called derivatives. Many derivatives are essentially unregulated, high-risk credit bets. And some experts estimate that around 95 percent of the money used in derivative contracts is borrowed. Derivatives speculations are basically debt piled upon debt upon debt.

And the shadow banking system is stuffed with the riskiest derivatives.

The imf has sounded the alarm. The Federal Reserve admits there is a problem.
Billionaire Warren Buffet called those derivatives “financial weapons of mass destruction.” That is a strong warning.

Why aren’t we listening?

The imf has sounded the alarm. The Federal Reserve admits there is a problem. Traders, economists and financial experts are realizing that all this hidden, risky betting could blow up in our faces.

That is exactly what is going to happen. And when it does, it is going to have major effects throughout the world, even to upset and reshape the geopolitical structure of international relations!

I strongly believe that the most powerful effect of this grave threat is going to emerge in Europe. That is just what Herbert W. Armstrong foretold would happen.

For decades Europe has tried to unify economically, militarily and politically, but it has been unable to do so. The European Union consists of 28 loosely allied, fairly disunited states. In that respect it has been a spectacular failure.

Mr. Armstrong made a personal prophecy about this, regarding how the European superpower would finally unite. I think it is the greatest personal prophecy he ever made because it is being fulfilled today exactly as he described it.

Mr. Armstrong found Otto von Habsburg to be an important figure in the development of the European superpower; the two men became associates. Habsburg was a member of the European Parliament and a descendant of the Habsburg dynasty, which ruled the Holy Roman Empire for centuries.

The Holy Roman Empire has a history that stretches back roughly 15 centuries. Its core is a union between church and state: a European imperium welded together by the Catholic Church. Time after time, this religious empire has risen, fallen and risen again. History records six resurrections of this empire.

Mr. Habsburg believed that the crown of the Holy Roman Empire—the imperial authority held by Emperor Charlemagne and all its other kings—would unite Europe once more. He was openly trying to unite Europe into a strong union—what would have been a seventh Holy Roman Empire. But that didn’t happen.

Mr. Armstrong told Mr. Habsburg that Europe would indeed unite in the modern era, and he told him how he thought it would happen: in the face of a drastic crisis. And that crisis would be financial. Mr. Habsburg said he agreed that the catalyst for unification probably would indeed be a financial disaster.

In 1984 Mr. Armstrong wrote that a massive banking crisis in America “could suddenly result in triggering European nations to unite as a new world power larger than either the Soviet Union or the U.S.”

More than three decades later, this personal prophecy of Mr. Armstrong is about to be spectacularly fulfilled.

Have we so quickly forgotten how close we came to economic disaster in 2008? The coming crisis is really a result of what happened six years ago. Here is how Rep. Paul Kanjorski recalled the day of Sept. 18, 2008: “The Treasury opened up its window to help, and pumped $105 billion in the system, and quickly realized it could not stem the tide. We were having an electronic run on the banks. They decided to close down the operation, close down the money accounts. … If they had not done that, their estimation was that by 2:00 that afternoon $5.5 trillion would have been drawn out of the money market system of the U.S., and would have collapsed the entire economy of the U.S., and within 24 hours the world economy would have collapsed. We talked at that time about what would happen if that happened. It would have been the end of our economic system and our political system as we know it.”

Mr. Armstrong saw this crisis looming in 1984. The steps that were taken to avert it in 2008 solved nothing—they only delayed it for a short time. There is going to be another financial meltdown—far more catastrophic. It will strike perhaps within the next year or two.

Herbert W. Armstrong warned that a massive financial crisis centered in America would ripple across the world and spark the rise of the seventh and final resurrection of the Holy Roman Empire. We are seeing that develop right now.

The Bible’s prophecies about this final resurrection of the Holy Roman Empire say that it will comprise a union of “ten kings” (Revelation 17:12). Ten leaders, representing 10 European peoples, will join together to forge a superstate more powerful than any Europe has seen for a long time. “These have one mind, and shall give their power and strength unto the beast”—prophetic language for a mighty political and military empire (verse 13).

What will cause these nations to unite so forcefully? It is very difficult to unite nations into “one mind”! That’s an incredibly challenging undertaking. But it is going to be done. In fact, it is taking place even now before our eyes.

Mr. Armstrong had profound insight in specifically forecasting that the catalyst for this dramatic unification would be a massive financial crisis that starts in America and ripples out from there. Look at conditions in America and the world today, and it is not difficult to see just how right he was!

This surely doesn’t make us feel secure, but it is the truth. It is what Mr. Armstrong recognized and warned about over 30 years ago—but few people heeded.

Watch the economic situation in America closely, and its effect on Europe—and see if this dramatic prophecy from Mr. Armstrong doesn’t come to pass just as he said it would!