Human beings killed the Kali Bein—then one tried to bring it back. 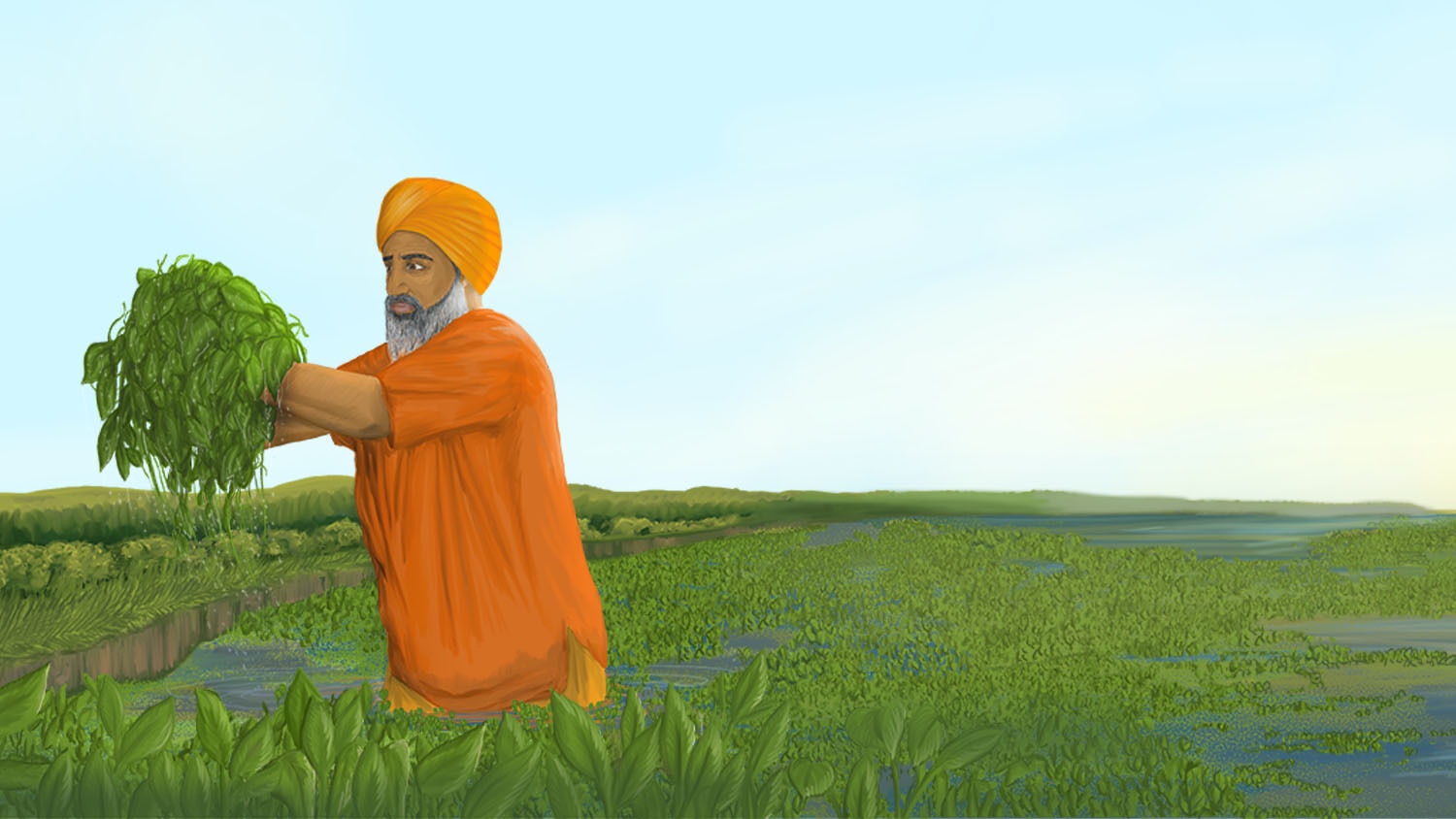 Human beings killed the Kali Bein—then one tried to bring it back.

“It had become a dead river,” said Sant Balbir Singh Seechewal in a January 13 interview with the Trumpet. He was describing the Kali Bein River in India’s Punjab region. Historically, this 99-mile-long tributary of the Beas River had been beautiful, full of life, and coursing with clear water. It had long been considered the lifeline of central Punjab’s Doaba region, where Mr. Seechewal grew up.

But beginning around 1960, the combination of population growth and industrialization in Doaba took a heavy toll on the river. Six towns and some 40 villages discharged their sewage and industrial waste into it, and long stretches were reduced to a sludge of thick and toxic filth. Some parts were dried up all together.

(Listen to this inspiring story on The Sun Also Rises, beginning at 13:15):

The people living near the river were suffering as a result. “A foul smell came out of it,” Seechewal said, adding that “nobody wanted to pass by the river.” Neighboring farms were enduring severe water shortages. Upstream regions experienced debilitating water logging since the river was no longer draining those lands. And the infected effluents, including poisonous chemical waste, were seeping into groundwater reservoirs and causing lethal diseases such as cancer among the Punjab people.

That was the situation in the year 2000 when Seechewal set his sights on the fetid mess that had once been the abundant Kali Bein.

Seechewal envisioned the river in its former glory, sparkling and bountiful. He longed to see it restored to that state. After failing to convince government and municipal bodies to take action, 38-year-old Seechewal decided he would devote his time to rejuvenating the river—personally.

Seechewal began traveling up and down the Kali Bein, visiting the towns and villages that were suffering from the polluted river—and were polluting it. He spoke with any who would listen about the need to revive it and sharing his vision of a clean Kali Bein. His basic message was: If we work on this together, our river can be beautiful, abundant and vibrant once again.

Some individuals responded to the message right away. People from several villages volunteered to help Seechewal and started raising money to buy sickles, shovels, spades and other tools and cleaning equipment. In a short time, he and these volunteers were down in the mud and muck, hard at work.

The team was small and the scale of the project was colossal. But Seechewal was not discouraged. “Undeterred by the mammoth task ahead, with his bare hands he started pulling out the weeds and clearing the garbage from the slushy riverbed,” journalist Narendra Kaushik wrote in the Weekend Leader (Aug. 1, 2016).

As the work progressed, more people began taking notice. The locals could see that Seechewal and his team were starting to accomplish something remarkable. “As word spread,” Kaushik wrote, “many children from the villages joined his efforts,” and “locals who were indifferent initially began supporting the efforts soon.”

More and more people started offering their labor to the project. After some farmers brought their tractors to the cleaning sites, progress shifted into a higher gear. And Seechewal was always on the front lines. “Seechewal himself was on the field either driving the tractor, supervising or getting down [in] the dirty waters,” Kaushik wrote.

As the years went by, more and more individuals saw the progress and volunteered to help Seechewal. Eventually, thousands of people from more than two dozen villages were assisting in the great cleanup. As they cleared a given section of riverbed, natural springs revived. The water rose, filling the riverbanks.

And their work didn’t stop with cleaning the riverbed. Seechewal’s teams also built embankments and brick sidewalks beside long stretches of the Kali Bein. They built numerous ghats—stairways for access to the river—and planted fruit trees and flowering plants along the banks.

Seechewal’s teams transformed all 99 miles of this sludgy trickle of filth and trash into a healthy river. “The cleaning and revival of the Kali Bein has led to multifaceted improvements in the area,” wrote Manpreet Nigah in An Assessment of Seechewal Initiative in the State of Punjab, India. “[T]he groundwater table has improved, and the ground water contamination and water logging problems have also been solved,” he wrote. “Agriculture, being the backbone of the economy in the area, has benefited greatly.”

“Today, the Kali Bein is thriving,” Time wrote in 2008, as it conferred the “Hero of the Environment” award on Seechewal.

But the challenge was not over. Some of the locals living along the Kali Bein continued dumping waste and trash into the cleaned river. Knowing that all of their hard work would be undone if the pollution continued, Seechewal again petitioned the government, asking leaders to take action against the practice. But again his requests were ignored.

So once again, Mr. Seechewal decided to take action himself. He mobilized his team to build an underground sewerage system. The system, Kaushik wrote, “included the laying of underground sewer pipes in the villages, and putting in place a natural treatment system through a layer of trenches.”

Seechewal’s low-cost, natural system treats sewage water in a way that makes the recycled water usable for irrigation and agriculture, so farmers also benefited from the process. After his team formulated this plan, the Punjab government finally got behind the initiative and helped make it a region-wide reality.

In 2017, in recognition of Mr. Seechewal’s remarkable accomplishments, the Indian government conferred upon him the prestigious Padma Shri civilian award. The government has also asked Seechewal to apply his proven model of community-based river restoration to the mighty River Ganges.

“We have proved that it is possible to restore our rivers to a pristine condition if we all come together,” Seechewal told Time, adding, “It is time to do that on a bigger scale” (Sept. 24, 2008).

In Mystery of the Ages, the late educator Herbert W. Armstrong lamented mankind’s reckless pollution of the world. “[W]hat has man done on the Earth where God placed him?” he asked. “Man has made ugly, polluted, defiled, profaned everything his hands have touched. He has polluted the air, befouled the water in the rivers, lakes and seas.”

Mr. Armstrong also wrote about a future cleansing of this pollution that will happen on a far “bigger scale” than what Seechewal envisioned and achieved. In his booklet The Wonderful World Tomorrow—What It Will Be Like, Mr. Armstrong made clear that the problem will be solved globally, and the entire world will be a pristine utopia. But, he explained, it will only happen after human nature—short-sighted, self-serving and law-despising—is fundamentally changed.

“[H]uman nature is the villain cause of all this world’s evils,” he wrote. “We shall never have utopia on Earth until human nature is changed.”

Mr. Armstrong made clear that the Creator God did not “create within humanity this thing we call human nature.” Instead, the kind of self-serving nature that results in environmental devastation and all other evils is something that people acquire as a result of rebelling against God, and yielding to the corrosive influence of Satan the devil.

He wrote: “The human mind is not born with Satan’s hostile, self-centered attitudes. Neither is a human born with the divine nature which the thoroughly converted Christian may acquire. Yet as soon as an infant or little child begins to exercise his brain in the thinking process, Satan’s broadcasts of the self-centered attitude begin reaching his brain through his human spirit. … Since the normal child’s mind begins receiving these impulses to accept Satan’s attitudes very early in childhood, unless counteracted by parental teaching and influence, he will automatically begin accepting these carnal attitudes. They become habitual—by habit they are acquired as a nature.”

Mr. Armstrong explained that when Christ returns, He will bind and lock up the arch-deceiver. “No longer will Satan … be able to inject into unsuspecting humans his satanic nature—which we have been misled into calling ‘human nature,’” he wrote.

Christ and His saints will then undertake a global “process of reeducation—of opening deceived minds—of undeceiving minds, and bringing them to a voluntary repentance,” he wrote.

Jesus Christ will return to Earth and bring with Him true education, teaching all mankind to love God’s law. God’s power will change human nature!

Jesus Christ, he wrote, is “coming in all the power and glory of Almighty God, as ‘King of kings and Lord of lords’ (Revelation 19:11-21), to … establish God’s world-ruling government over all nations,” he wrote. He then cited numerous Bible passages foretelling of this momentous event: Daniel 2:44; 7:9, 13-14, 18, 22, 27; Isaiah 9:7. Isaiah 11 and 35 describe the worldwide beauty and abundance that will result from this reeducation of mankind.

“He will enforce God’s law—God’s government on Earth,” Mr. Armstrong wrote. As a result of people abiding by that law and living and working under that divine government, “Air pollution, water pollution, soil pollution [will be] gone” and all people will have “[c]rystal-pure water to drink” and “clean, crisp, pure air to breathe,” he wrote.

Mr. Armstrong continued: “[It will be a] world filled with happy radiating humans, guided, helped, protected and ruled by former mortals made immortal—and all the humans realizing that they, too, may inherit everlasting life in supreme happiness and thrilling joy. What a fabulous picture!”

Seeing Mr. Seechewal’s success with the Kali Bein can help us to envision that “fabulous picture” of the entire future world, when people will live joyous lives on an Earth that is clean, beautiful and abundant. It can help us picture the time after human nature is changed into God’s nature, and radiant utopia will cover the Earth.