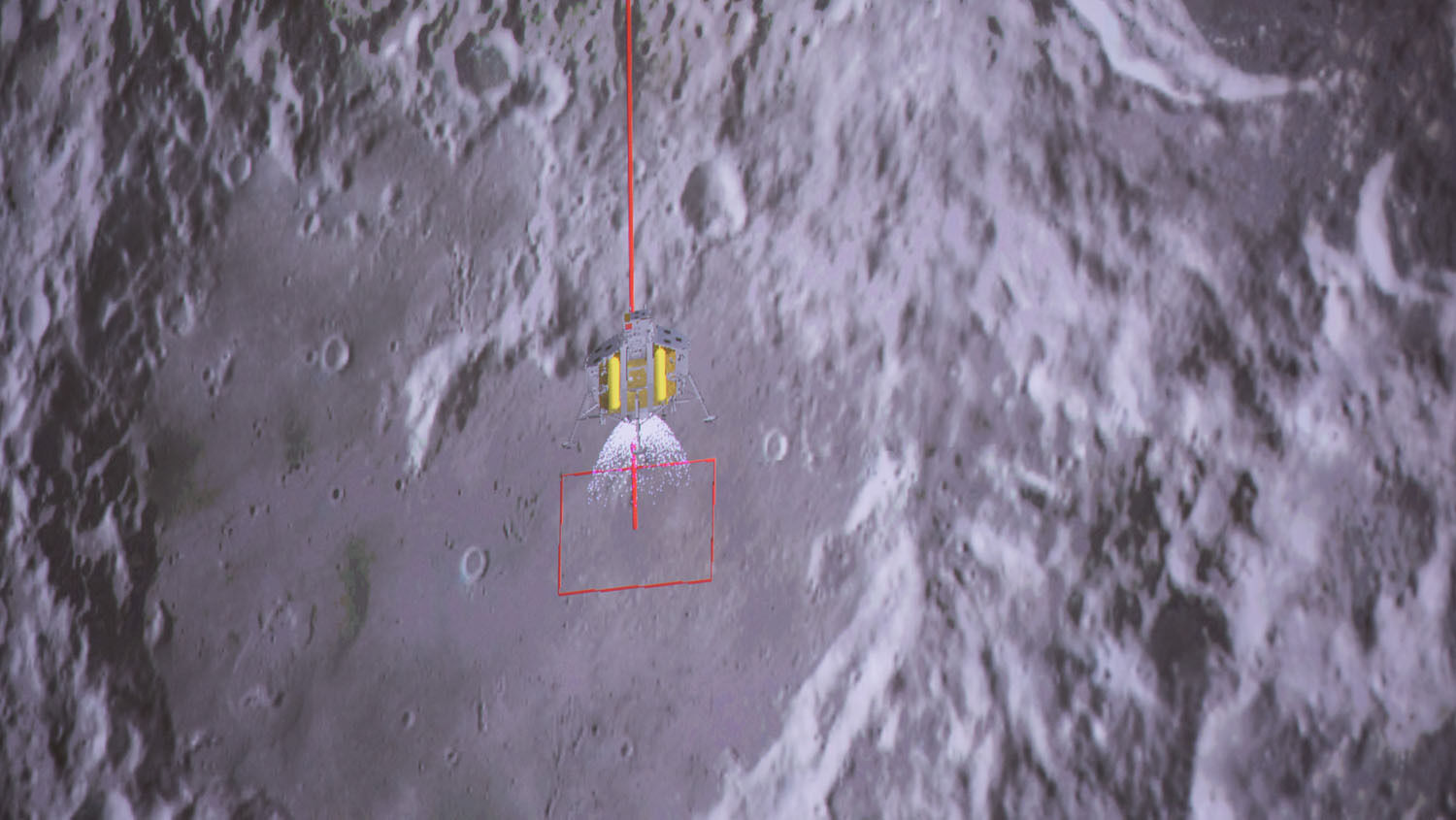 A simulated landing process of Chang’e-4 lunar probe is seen on a monitor at Beijing Aerospace Control Center in Beijing, China, on January 3.
Xinhua/Jin Liwang/Getty Images

China’s prophesied rise in space exposes the dangerous weakness of the West.

China achieved a world first on January 3 when its moon lander, Chang’e-4, made a soft landing on the far side of the moon. This is another triumph in China’s quest to dominate the space race of the 21st century, and it will have important consequences for us on Earth.

Many probes have photographed or crash-landed onto the moon’s far side, but Chang’e-4 is the first to make a “soft” lunar landing, a type of landing where no serious damage occurs to the spacecraft. This is a tricky maneuver because signal transmissions from Earth are blocked by the moon.

To solve the problem, China came up with a simple solution: deploy a signal relay satellite to orbit the moon before the probe’s arrival.

The rover will now explore the Aitken Basin, one of the moon’s oldest and largest-known craters. Located on the South Pole, it is about five miles deep and 1,550 miles wide. It covers a quarter of the moon’s surface.

While Chang’e-4 begins exploring the moon, it is important to remember that China’s actions in space will directly affect us here on Earth.

China’s triumphant moon landing is recognized as a sign of its ambitions to become a world leader in space. Though it entered the space race later, China quickly gained momentum and already has audacious plans to dominate it.

One reason China has caught up so quickly is that it is learning from the Americans.

Investigations in the United States have revealed that the Chinese are trying to dominate the space industry in a similar way to how they are attempting to monopolize the 5G mobile network.

Their space strategy is basically the same: invest in American companies. In one instance, China’s Tencent Holdings invested in American company Moon Express, a partner of nasa. In another, Boeing canceled a satellite order from Global IP after discovering that China had invested $200 million in the company.

In addition to making gains from American companies, China is also pouring time and money into its domestic space programs.

The pace of development in China is incredibly fast. In 2018, China launched 36 rockets, more than any other nation. The U.S. launched only 30.

The Wall Street Journal quoted Namrata Goswami, an expert on China’s space program at Auburn University, who said, “China sets long-term goals and meets them. They see the moon as a vast energy resource for sustainable development. Their plan is to industrialize the moon.”

China wants to establish a manned lunar base, with hopes to land astronauts on the moon by 2030, from which it would aim to lead the world in further space exploration. It has already created a fully functional satellite navigation system. It has previously demonstrated its ability to shoot down satellites. It has even made plans to create an artificial moon, reducing or eliminating the need for streetlamps in specific areas.

Although making an artificial moon is unlikely at present and is not China’s highest priority, it reveals the spirit behind the nation’s space program. It shows what China’s leadership wants to achieve. Conquering land and sea is not enough; China must also subjugate space.

“The space dream is part of the dream to make China stronger,” President Xi Jinping said in 2013 soon after he became president.

While China plots to colonize the moon, America fails to strengthen nasa, falling further behind.

China’s National Space Agency is the second-best funded in the world behind the U.S. And judging by what they are accomplishing, they are much more efficient than their American rivals.

China’s moon landing is much more than just an interesting diversion. It has sent a powerful message to the world, and specifically to the United States.

The same technology that gets a rover to the moon can also deliver an anti-satellite missile to its target. China has already proved itself capable of shooting down satellites.

America’s military relies on satellites. It depends on them for its civil and military needs, for everything from weather forecasts to phone service to communicating on the battlefield to detecting hostile missile launches.

America has had years to grow accustomed to being the only power with significant space capabilities. It has grown to rely on its systems, while at the same time not really having to defend them.

Now, it can be seriously challenged by China. And America’s space systems are like anything fragile: hard to build, hard to defend, but much easier to damage or destroy.

For years, Trumpet editor in chief Gerald Flurry has pointed to America’s technological dependence as its “Achilles’ heel.” It may surprise you that this exact situation was prophesied more than 2,000 years ago in your Bible.

Bible prophecy clearly shows that America’s weakness is its dependence on technology. In an article titled “America’s Achilles’ Heel—and Germany,” Mr. Flurry wrote about how America’s enemies will exploit this weakness:

I believe one key end-time Bible prophecy could well be fulfilled through … cyberterrorism: “They have blown the trumpet, even to make all ready; but none goeth to the battle: for my wrath is upon all the multitude thereof” (Ezekiel 7:14). The trumpet of war is to be blown in Israel—mainly America and Britain. … It seems everybody is expecting our people to go into battle, but the greatest tragedy imaginable occurs! Nobody goes to battle—even though the trumpet is blown! Will it be because of computer terrorism?

America will be attacked—but nobody will act. This is a real-life situation that is very possible in today’s technology-filled world; yet your Bible described it thousands of years ago. We must pay close attention when we see events heading this way.

America’s fall will involve China and Germany. Other prophecies in Ezekiel and Isaiah describe a German-dominated Europe briefly aligning with Asian nations to economically besiege America. After America is out of the picture, these two superpowers will turn on each other, further escalating an already unprecedented time of suffering. The world-swallowing conflict that will result will be so intense that if Jesus Christ did not intervene, all humanity would be wiped out (Matthew 24:22).

The good news, however, is that He will intervene. As we have written in our booklet Russia and China in Prophecy:

There is wonderfully good news in the midst of all these horrors. Both of these armies will gather in Armageddon to fight each other, but will end up fighting Christ at His Second Coming! The “king of fierce countenance”—the leader of the beast power—will try to fight Christ, and will be “broken without hand” (Daniel 8:25). The armies will make war with the Lamb, and the Lamb will overcome them (Revelation 17:12-14). All of these evil forces will be soundly defeated! The conclusion of that battle will mark the beginning of a new, peaceful age for the whole Earth!

You need to stay informed on how China’s rise is fulfilling Bible prophecy. To read more about the time of hope and lasting peace that lies just beyond the suffering, request your free copy of Russia and China in Prophecy.