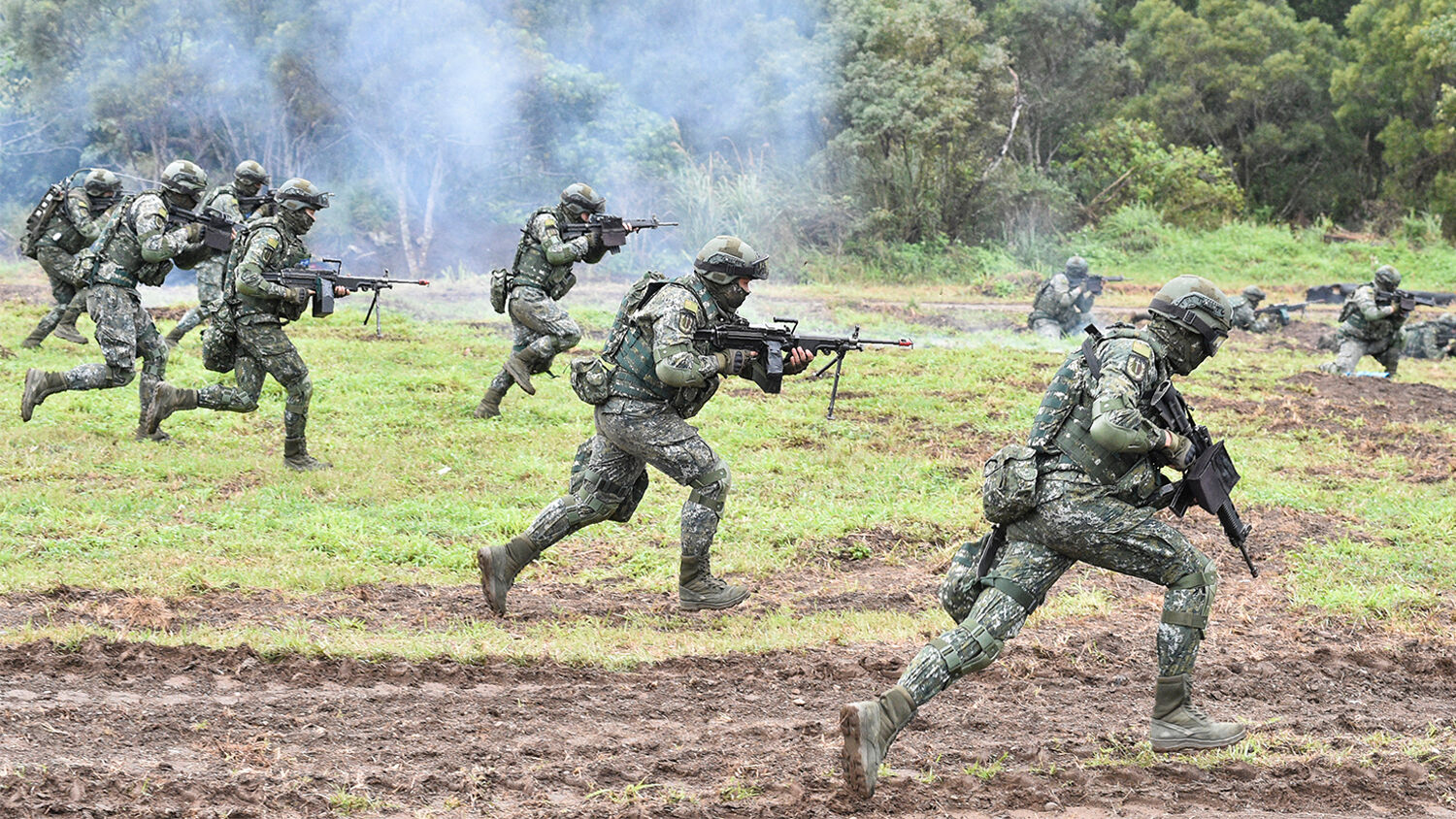 Taiwanese soldiers stage an attack during an annual drill at a military base in the eastern city of Hualien.
MANDY CHENG/AFP/Getty Images

The Taiwanese are bracing for the possibility that China will use military force to attempt to assert control over their island.

Tsai told the press during Taiwan’s National Day celebrations that China’s “unilateral diplomatic offensive and military coercion have not only harmed cross-strait relations. They have also seriously challenged the status quo of peace and stability in the Taiwan Strait …. Our military strategy is resolute defense and multi-domain. Its core value lies in upgrading [Taiwan’s] military’s capabilities. Our lean and combat-ready troops absolutely have the ability to defend Taiwan’s sovereignty.”

China’s Communist government sees democratic Taiwan as a renegade territory that it has the right to control through diplomacy or, if necessary, by force. Ever since Tsai was elected president in 2016, China has increased military and diplomatic pressure on Taiwan.

This year, China accelerated routine encirclement drills around Taiwan. China flew its newly acquired Su-35 fighter jets along with H-6K bombers, J-11 fighters, and KJ-2000 aircraft around Taiwan. Intimidated by these drills, Taiwan seeks to expand its military so it can counter Chinese aggression.

Since Tsai entered office, China has also convinced several of Taiwan’s last remaining diplomatic allies—São Tomé and Príncipe, Panama, Burkina Faso, the Dominican Republic and El Salvador—to switch their allegiances to China. In July, China demanded that major international airlines start referring to Taiwan as part of China rather than as an independent nation. Many of these airlines caved in to China’s demand and removed any indication that Taiwan is an independent state.

China considers Taiwan a top priority in its foreign policy, and says it reserves the right to forcefully take over Taiwan.

Taiwan has survived Chinese aggression largely because of strong military and political ties with the United States. But U.S. support of Taiwan’s sovereignty has ebbed over the years. In 1998, President Bill Clinton was described as the “first U.S. President to publicly oppose Taiwanese independence.” In 2007, President George W. Bush rejected a referendum that would grant Taiwan membership in the United Nations.

Taiwan could compromise with China and surrender to its intimidation to avoid war. Trumpet editor in chief Gerald Flurry wrote in the August 1998 print issue:

The premise of Mr. Flurry’s analysis on the China-Taiwan situation and America’s unreliable defense commitments is Bible prophecy. Leviticus 26:19 says that God will break the pride of America’s power in this end time. America’s partnership with Taiwan remains intact for now, but this prophecy shows that it will not remain so.

Taiwan’s pledge to increase military spending is also significant because Bible prophecy reveals that a union of Asian nations known in scripture as “the kings of the east” (Revelation 16:12) will combine their militaries together in the end time in order to confront a common enemy. It is likely that Taiwan will be part of this powerful Asian bloc.

To understand more about China’s rise to superpower status and what the future holds for Taiwan’s struggle to remain independent, please read Russia and China in Prophecy and “Taiwan Betrayal.”