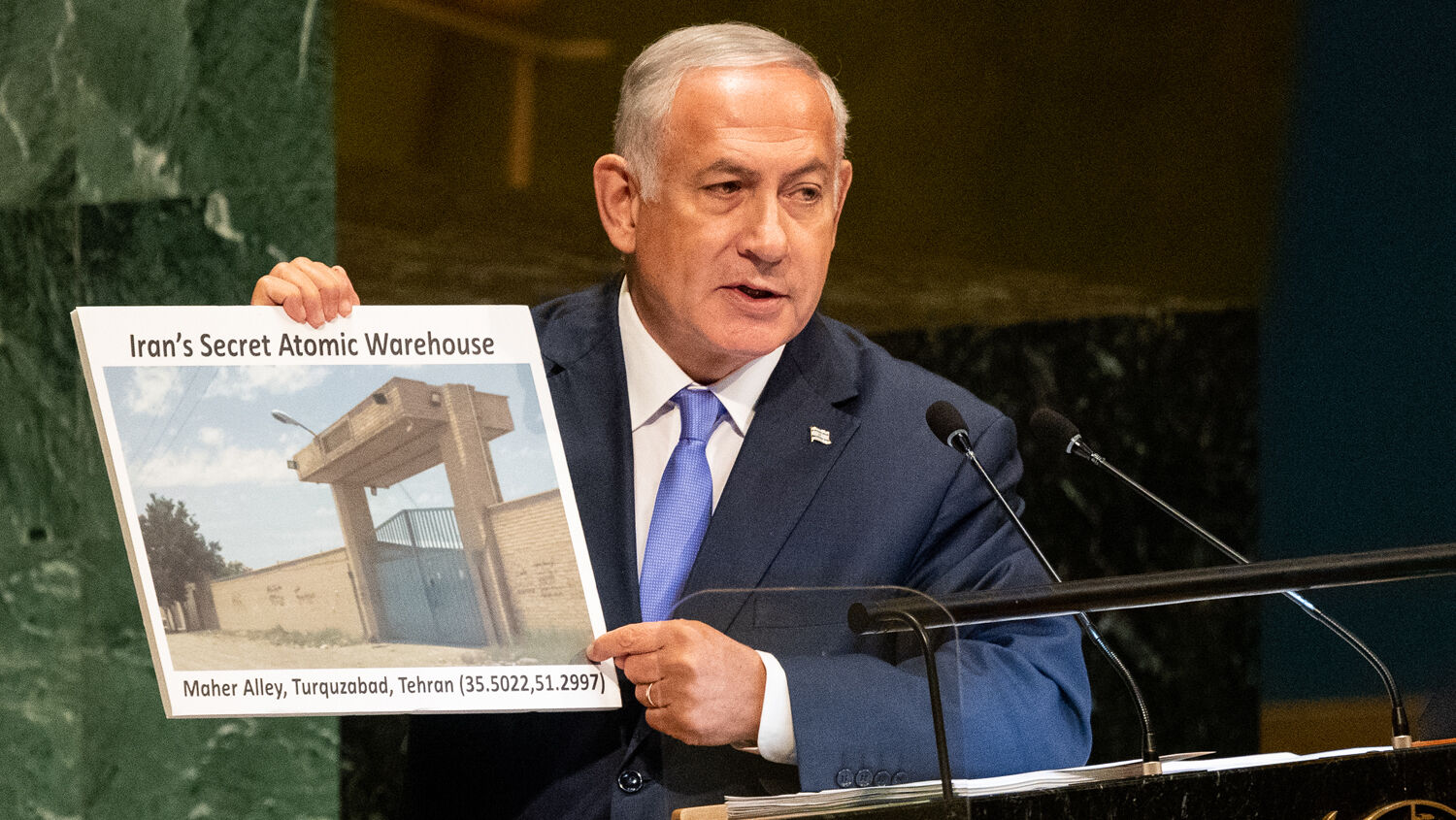 Israeli Prime Minister Benjamin Netanyahu disclosed to the United Nations General Assembly on September 27 that “Iran has another secret facility in Tehran.” He described the installation as an “atomic warehouse for storing massive amounts of equipment and material from Iran’s secret nuclear weapons program.”

Israel conducted a raid in February against Iran’s secret atomic archive, obtaining more than 100,000 files from a nondescript warehouse in Tehran. In May, Netanyahu presented a short summary of what these files contained and released the details of one secret Iranian nuclear site.

Israel also shared the evidence with the International Atomic Energy Agency, but it has yet to investigate the claim.

This atomic warehouse on Maher Alley and Maher Street houses at least 15 containers holding as much as 300 total tons of nuclear-related equipment and material.

In Netanyahu’s speech to the General Assembly, he stated (emphasis added):

You have to ask yourself a question: Why did Iran keep a secret atomic archive and a secret atomic warehouse? Because, after all, when South Africa and Libya, when they gave up their nuclear programs, the first thing they did was to destroy both the archives and the material and equipment.

And the answer to the question is simple: The reason Iran didn’t destroy its atomic archive and its atomic warehouse is because it hasn’t abandoned its goal to develop nuclear weapons. In fact, it planned to use both of these sites in a few years when the time would be right to break out to the atom bomb.

Just two days after the Joint Comprehensive Plan of Action nuclear agreement came into effect on Jan. 16, 2016, Iran was working to improve its nuclear-capable intercontinental ballistic missile technology. It was already breaking the terms of the agreement.

Yet under President Barack Obama, the United States lifted sanctions on Iran, as did the European Union. The U.S. welcomed Iran back into the global economy and released over $100 billion in frozen assets. Iran was given everything it needed to accelerate its progress in developing the nuclear bomb.

Many believed it would use the billions of dollars to improve the lives of its people and to focus on humanitarian needs. This was not the case. “Instead, Iran used the money to fuel its vast war machine,” said Netanyahu. “Just this past year, Iran has attacked Kurds in Iraq, slaughtered Sunnis in Syria, armed Hezbollah in Lebanon, financed Hamas in Gaza, fired missiles into Saudi Arabia, and threatened freedom of navigation in the Strait of Hormuz and the strait of Bab el-Mandeb.”

The nuclear deal did not make the world safer, but rather, it brought war closer.

On the very day the sanctions were lifted, Iran announced the purchase of 114 Airbus planes from European nations.

Why was Iran so eager to jump into major business deals with Europe? Because it wants to get so involved in the global economy that nobody dare try to push it back out. It rushed into the Airbus deal because it is rushing to build the bomb at the same time! And it doesn’t want anyone hindering its progress, as happened before with the sanctions regimes.

Under President Donald Trump, the U.S. is in the process of reimposing financial sanctions to curb Iran’s nuclear and regional ambitions. However, European nations are trying to undermine this by continuing to do business with Tehran. Netanyahu said this regarding Europe’s refusal to reimpose sanctions:

Yet while the United States is confronting Iran with new sanctions, Europe and others are appeasing Iran by trying to help it bypass those sanctions. … Have these European leaders learned nothing from [pre-World War ii] history? Will they ever wake up?

It is obvious to most that Iran has no intention of changing any of its policies. Both its continued development of ballistic missiles that can carry nuclear warheads and the discovery of this secret nuclear cache provide proof that Iran is breaking the spirit of the agreement and most likely the letter. Meanwhile many in the West are continuing their policy of appeasement.

In The King of the South, Mr. Flurry writes: “The blatantly bold and aggressive foreign policy of Iran must lead to war. It will either conquer or be conquered.”

The Bible prophesies that a “king of the south” (radical Islam, led by Iran), will push at Europe. “And at the time of the end shall the king of the south push at him: and the king of the north shall come against him like a whirlwind, with chariots, and with horsemen, and with many ships; and he shall enter into the countries, and shall overflow and pass over” (Daniel 11:40).

Iran’s foreign policy involves a lot of pushing. The Washington Report on Middle East Affairs wrote: “Apparently the Iranians are calculating exactly how far they can push their neighbors …” (June 1993).

In the 1930s, Winston Churchill was a lone voice warning Britain and America about the aggression of Germany. But he was surrounded by a pacifist crowd. Netanyahu, like Churchill, has long stood alone among world leaders warning against Iran’s aggressive foreign policy.

Just as in the 1930s, today’s appeasement is leading to war. Mr. Flurry writes:

Following this nightmare, the Messiah will come to Earth and put a stop to this war. It is the best news anyone could hope for. It will be a time when mankind’s history of war will finally come to an end. There will be no more terrorism, no destruction, and no more war. Isaiah 2:4 says that they will beat their swords into plowshares, and then we will see a new world full of peace and prosperity for all nations.