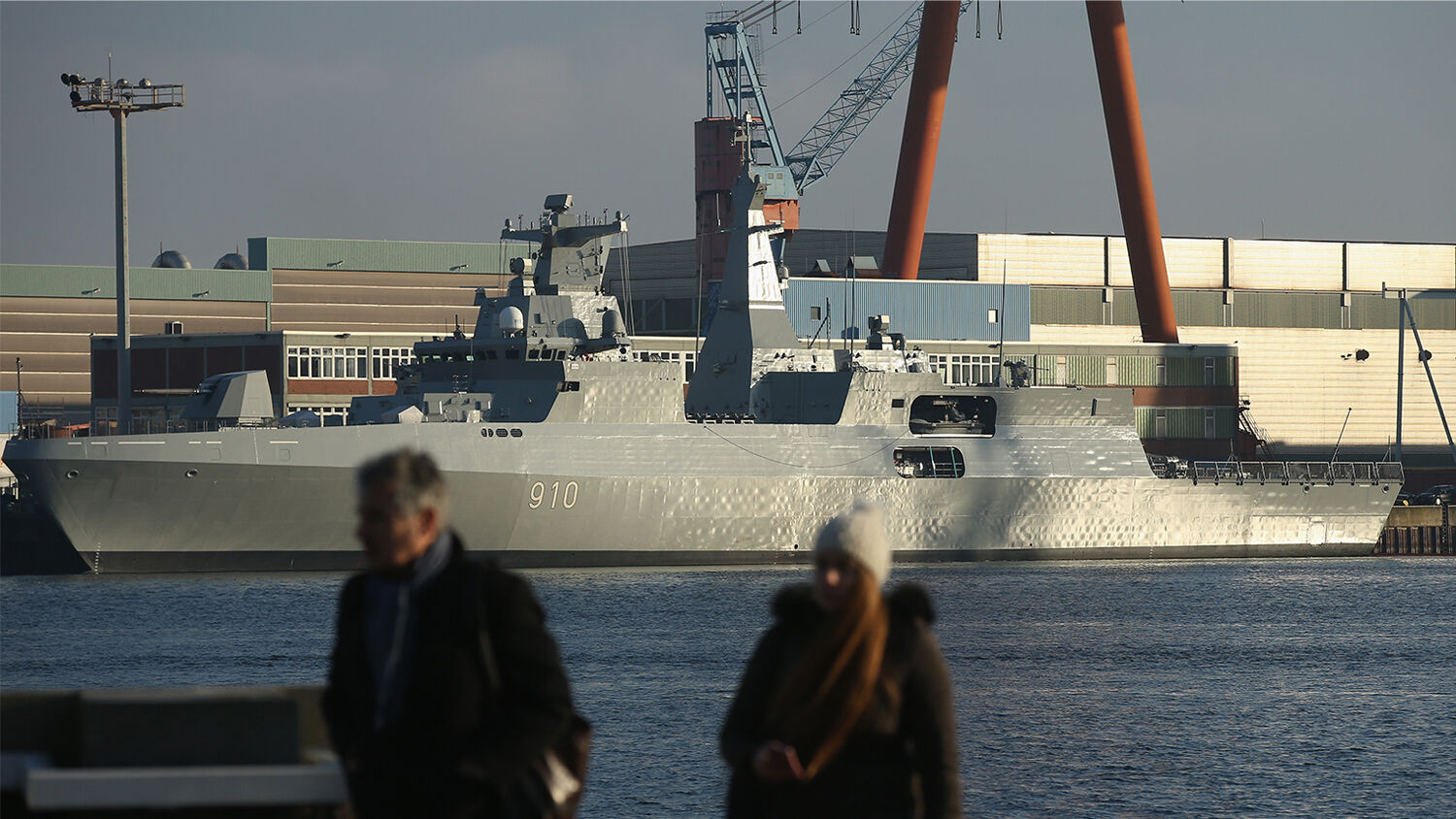 People walk along the shore across from a corvette warship under construction at the ThyssenKrupp Marine Systems GmbH shipyard.
Getty Images

‘I wish we could have this ship on our waters right now.’

Germany’s ThyssenKrupp Marine Systems began construction on February 7 of four advanced warships for the Israeli Navy. The first is scheduled to arrive in Israel next year. All four are projected to be fully operational by 2021, as part of the “main pillars” of Israel’s naval defense.

High-ranking naval officials from both Israel and Germany attended the steel-cutting ceremony at ThyssenKrupp’s shipyard in Kiel, Germany.

The Sa’ar 6-class corvettes will carry surface-to-air precision missiles and equipment for electronic and cyberwarfare. The advanced warships “are one of the main pillars in the naval defensive wall that the idf [Israel Defense Forces] has,” said Vice Adm. Eli Sharvit. “In recent year[s], the importance of maritime supremacy has been reinforced with the understanding that it constitutes a pillar of the security of the State of Israel.”

Israel plans to use these ships to defend its territorial waters and offshore gas rigs in the Mediterranean Sea. Nearly 60 percent of Israel’s electricity comes from natural gas produced by these rigs. More than 90 percent of its imports come by sea.

Israel fears Iran and its Lebanese proxy Hezbollah. The Jerusalem Post quoted a senior Israeli naval officer as saying, “The Iranian presence is a game-changer.” He also said, “Hezbollah radiates naval power even without having any ships or submarines.” It could target Israeli strategic assets with suicide vessels or land-to-sea missiles.

“I wish we could have this ship on our waters, right now,” the senior officer said.

It is significant that Israel is turning to Germany for this critical defense against Iran and Hezbollah. As Vice Admiral Sharvit said, it “constitutes a pillar of the security of the State of Israel.”

The Sa’ar 6-class warships will cost $480 million. Germany will subsidize a third of the cost, as it has done for other Israeli vessels. German Defense Minister Ursula von der Leyen said that Israel was Germany’s “biggest friend in the Middle East,” when the two nations signed the deal for the ships in 2015. She added, “We have 70 projects with you, and there is not a country in the world we have such expansive security relations with like we do with Israel, both bilaterally and in cooperation between the militaries.”

The Trumpet watches this relationship between Israel and Germany not only because the two nations share a common enemy in Iran (our booklets The King of the South and Germany’s Secret Strategy to Destroy Iran explain the many ways Germany is prophesied to confront this common foe) and not only because of their shared history in World War ii (our booklet Germany and the Holy Roman Empire documents this relationship in vivid detail). The Trumpet keeps a keen eye on Israel and Germany because the Bible prophesies that Israel will look to Germany for its security.

Hosea 5:13 reads: “When … Judah saw his wound, then went [Judah and one of his allies] to the Assyrian … yet could he not heal you, nor cure you of your wound.” As our literature explains, Judah refers to the Middle Eastern nation of Israel; the Assyrian refers to modern-day Germany.

We are already seeing Israel beginning to look to Germany for help. … God tells Judah that Germany cannot “heal you, nor cure you of your wound.” Why does God say that? Because Judah got into this mess by looking to men. Now it is trying to get out of the quagmire by looking to men. The people of Jerusalem will never find a cure or be healed until they look to God!

What Israel needs most right now is not the Sa’ar 6. More than any piece of equipment, Israel needs to put its faith in God as it did at various times in the past. The very nation that Israel relies on as a “pillar” is prophesied to betray it—again. Download or request your free copy of Jerusalem in Prophecy if you would like to follow this biblically prophetic trend.