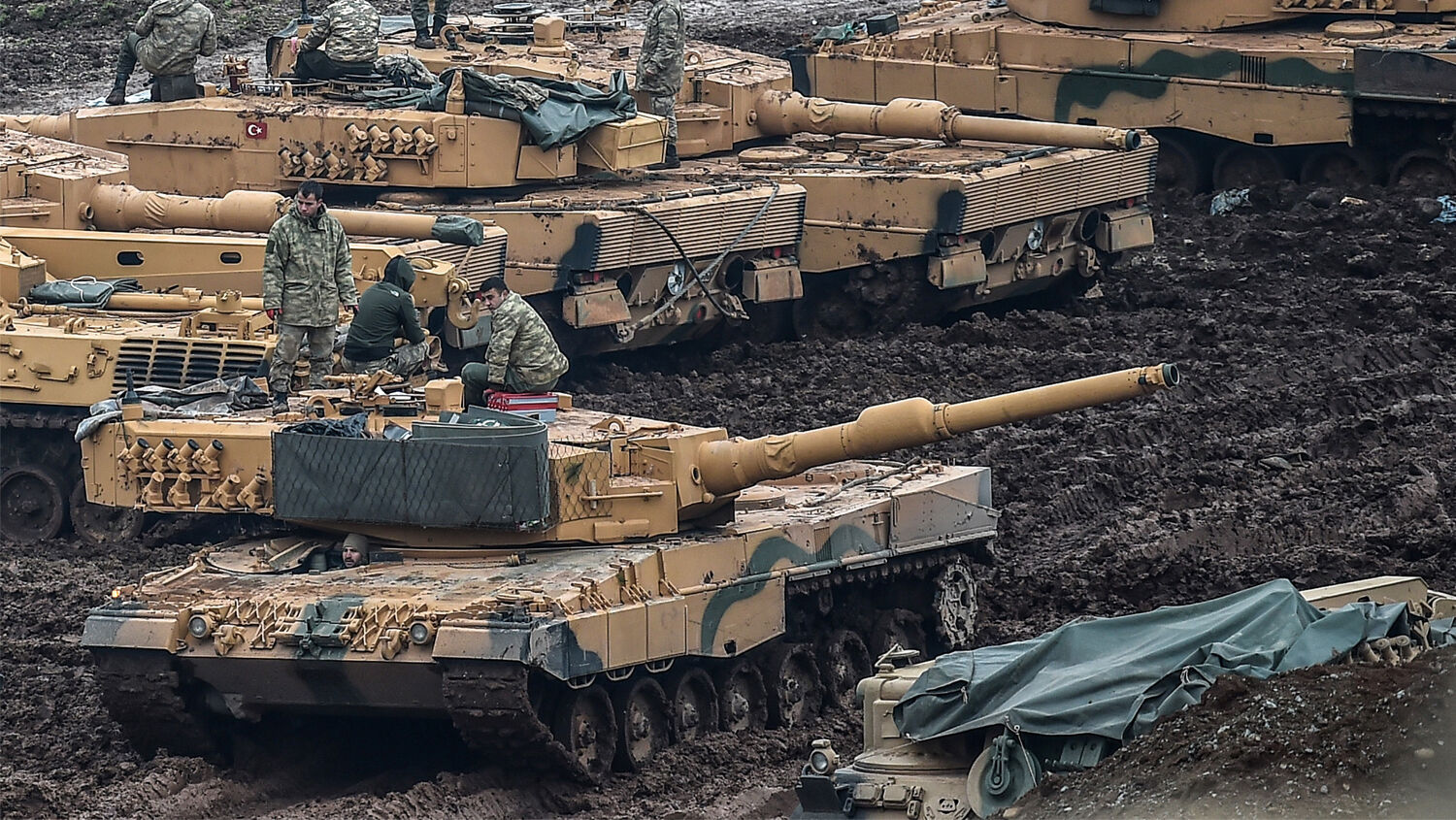 Turkish tanks are parked near the Syrian border at Hassa, in Hatay province, on January 24, as part of Operation Olive Branch.
OZAN KOSE/AFP/Getty Images

Turkey has begun a military operation in Syria’s northwestern region of Afrin as part of its ongoing effort to solve the Syrian crisis and combat what it calls terrorists.

Code-named Operation Olive Branch, the offensive is Turkey’s effort to rid the Afrin border region of an estimated 10,000 Kurdish militants and create a 20-mile-deep security buffer. The Kurdish rebels are affiliated with the People’s Protection Units (ypg) and the Kurdistan Workers’ Party (pkk), and Turkey considers them terrorists.

Operation Olive Branch began on January 20, six days after the United States announced plans to support a 30,000-strong “border force” of Kurdish fighters in Syria. Turkish President Recep Tayyip Erdoğan angrily responded to that announcement: “A country we call an ally is insisting on forming a terror army on our borders. What can that terror army target but Turkey?” He then threatened, “Our mission is to strangle it before it’s even born.” Hence the Afrin offensive.

“Our goal is not to clash with Russians, the Syrian regime or the United States,” said Turkish Foreign Minister Mevlüt Çavuşoğlu. “[I]t is to battle the terrorist organization.”

The Turkish offensive, carried out over the protests of the United States but with the apparent assent of Russia, marks a perilous new phase in relations between two nato allies—bringing their interests into direct conflict on the battlefield. It lays bare how much leverage the United States has lost in Syria, where its single-minded focus has been on vanquishing Islamist militants.

Both America and Russia have expressed concern over the Turkish offensive, and both have urged Turkey to show restraint in the operation. However, according to some analysts, Russia acquiesced to Turkey’s invasion because it wanted to undermine the U.S. According to Sergei Markov, a political analyst and a former Russian politician, “Russia does not publicly support such a military operation, but it opened the gate for this operation because it basically starts a proxy war between Turkey and the U.S. [through the ypg].”

The significance of Turkey’s offensive is twofold. First, it exposes Turkey’s tendency to betray friends and alienate allies. The war in Syria has provided a rare opportunity for Turkey, Russia and Iran to unite and attempt to jointly resolve the crisis. But Russia’s reluctance to support Turkey, among other recent developments, shows that this alliance may be failing. The Syrian crisis has also worsened Turkey’s relationship with the U.S., its foremost nato ally.

Second, it reveals the growing power of Turkey’s strongman Recep Tayyip Erdoğan, and the Turkish military. Turkey’s military is one of the most powerful in the Middle East. Its strategic location as a land bridge connecting the Middle East, the Caucasus and Europe gives it tremendous geopolitical clout.

Can Bible prophecy shed any light on this development? It can. A prophecy in Psalm 83, for example, indicates that modern-day Turkey will be powerful enough to form a major political and military alliance with select Arab nations and Germany. This prophecy also indicates that this German-Arab bloc would be strongly anti-American, and would actively work to undermine the U.S.

Germany is Turkey’s most important trading partner, but in recent months and years, ties between the two nations have been severely strained by Erdoğan’s turn toward authoritarianism and a spat between him and European leaders, particularly German Chancellor Angela Merkel. Turkey angered Germany further when it imprisoned several German journalists and human rights activists. But there are signs of the “beginnings of a Turkish-German bromance,” as Politico wrote on January 12.

Spiegel Online wrote on January 22 that “recently, Ankara has begun sending early signals of rapprochement toward Berlin, and several innocent German citizens, imprisoned for no good reason, have been released.” It reported that the Turks and Germans are currently negotiating the release of one particular German citizen in exchange for German weapons and enhancements to Turkey’s German-made Leopard 2 tanks, which Turkey desperately needs in its operations in Syria.

In The King of the South, Trumpet editor in chief Gerald Flurry discusses Turkey’s alliance with Germany in a chapter titled “A Mystery Alliance.” Read it online or request a personal copy of Mr. Flurry’s free booklet to understand the biblical prophecies about Turkey’s destiny.