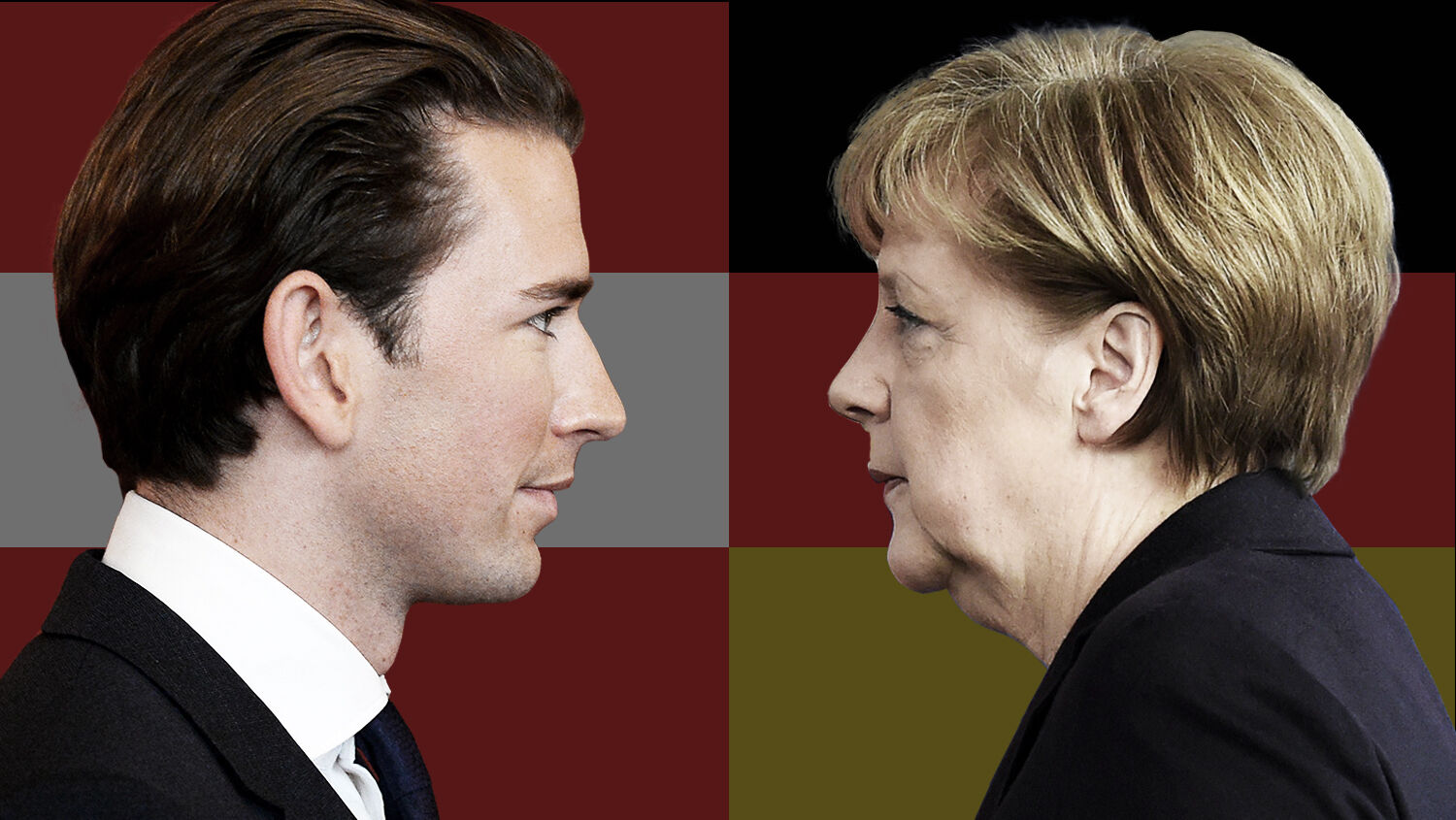 Is Europe ready for the far right?

A far-right party was sworn in as Austria’s new government on December 18. Sebastian Kurz, leader of the Austrian People’s Party (övp), took the chancellorship, with key ministries going to fringe right-wing coalition partner the Freedom Party of Austria (fpö).

The entry of fpö, a party founded by a former SS member, into Austria’s government is big news for the country. But it is bigger news for all of Europe. Germany’s Wirtschaftswoche believes this to be a turning point in Europe’s history (Trumpet translation throughout):

In all likelihood, 2017 is to be seen in retrospect as the year which signaled the end of a political era in Germany—and the beginning of a new era in Austria.

There are hardly any other two states in the world as similar as Germany and Austria, with a common history, culture and language. …

Kurz’s decision to partner with the far right is significant because he is dealing with problems faced by the rest of Europe. The popularity of mainstream parties is declining, while parties that used to be considered extreme are rising. By embracing ideas from the far right and even embracing the far-right party itself, Kurz secured the people’s vote and indisputable control of Austria. In the process, he made a big splash on the world scene.

His key to success: accept, adopt and ally with the far right.

Kurz recognized that alienating the far right would mean alienating a growing number of voters. So he accepted the concerns of the people and adopted the slogans and demands of the far right. Thus he secured his majority in parliament. While other parties criticized the radical turn, Kurz didn’t hesitate to go a step further and form a coalition with the far-right fpö.

The fpö is especially criticized for its close ties to Nazi ideologies. Its leader, Heinz-Christian Strache, grew up admiring Nazi ideologies and participated in neo-Nazi rallies in 1989. While he blames the foolishness of his teenage years for such involvement, his political ideas are at times hardly distinguishable from past extremist views. The rhetoric might have changed, but Strache’s thinking has not—in 2016 he called Merkel “the most dangerous woman in Europe.”

This doesn’t bother the conservative Sebastian Kurz—on the contrary, he too is anti-Merkel. He had no problem entrusting the fpö with key government ministries, such as the Defense Ministry and the Interior Ministry. The Foreign Ministry is led by party independent and longtime diplomat Karin Kneissl. She too is said to have a strong association with the fpö. All three ministries play a crucial role in dealing with the refugee crises, so Austria is destined to take a much more radical approach in its migrant policy.

Kurz’s övp has been in coalition with the far right once before, in 2000. Then Austria was shunned by Europe and the world. But times have changed, and rather than a huge uproar, only a few thousand protesters showed up as the parties took office. Adding to the support from the people and Brussels, Kurz also enjoys close ties to the Catholic Church (read “Sebastian Kurz’s Catholic Faith: What Role Will It Play in Europe’s Future?” for more information).

Kurz also points to a different way at the European level. One of the biggest problems both Austria and Germany face is the migrant crisis—but their way of dealing with it is strikingly different. The 182-page coalition agreement that Kurz and Strache submitted says that asylum seekers have to pay cash upon arrival. The money will be used to partially finance basic services for asylum seekers and other needy immigrants. Furthermore, asylum seekers must turn over their cell phones temporarily for examination.

In Germany, asylum seekers receive money upon their departure. “A new program will give rejected asylum seekers up to €3,000 (us$3,600) when they return to their home country,” reported German newspaper Die Welt.

When Kurz served as Austria’s foreign minister, he was known as one of Merkel’s greatest critics. At that time his voice didn’t carry much weight, but now he is rising as one of Europe’s strongmen while Merkel struggles to keep her head above water.

Kurz has a new vision for Europe, and he doesn’t just want Austria’s asylum policy to change. He told Bild am Sonntag that the distribution of migrants in the European Union according to fixed quotas was irrational. “Forcing states to accept refugees does not further Europe,” he said—he claims that it divides Europe. Merkel proposed the quota and alienated all East European countries from a common migrant policy.

The Turkey deal can only be Plan B. Plan A needs to be a strong Europe that is prepared to defend its external borders on its own. If we do not do that, then we are living in a Europe that is dependent—on other countries, and possibly even on personalities like President Erdoğan. And dependency is dangerous.

Kurz at the time proposed to seal off the Mediterranean, have joint-protection of the EU’s external borders, and provide more humanitarian aid to the countries of origin. He also said European countries need to be able to decide who and who not to take in. To accomplish this, he proposed a reception center for migrants be established on an island in the Mediterranean.

When Kurz proposed his plan in 2016, he was criticized and written off as extreme. At the time, he was only a minor player on the political field. “He has a plan,” we wrote, “but by no means the power to implement it.” But the extreme of 2016 is the chancellor of today. Times have changed and such radical views might soon become the norm for Europe.

While Kurz’s ideas clash with that of Merkel’s, they resonate with others in her government and at the EU level. Many have already considered doing in Germany what Kurz has done in Austria, but they fear becoming a political outcast, rejected and marked as Nazis. They watch Austria to see whether Europe will tolerate the extremists in its midst.

Meanwhile, Kurz claims great successes in Austria and on the European level. Eastern Europe favors his policies, but they know that Austria historically has followed Germany, not vice versa. Though Austria might give the incentive and suggestions, it is unable to stand in the way of Europe’s most powerful economy. Germany has the power to make its suggestions Europe’s command.

Thus Europe looks to Germany before following Austria. Bible prophecy tells us that Merkel will not be able to withstand the rising mainstream. Once Germany adopts the extremists’ views, the whole of Europe will follow. Wirtschaftswoche believes that it will only be a matter of time till Germany gets its own Kurz and ushers in a new era in Germany. It reported:

If you ask Union politicians, who don’t agree at all with their boss, why they still support her, they usually answer with a poor counter question: Who else is going to do it? If there were a man or a woman in the German Union parties like Kurz who had the willpower, Merkel would probably no longer be chancellor.

Since such a man or woman does not exist, since the cdu is not only programmatically completely desolate but also desolate in personnel, Angela Merkel can postpone the end of her era for now. How the end will come and who will bring it about remains to be seen. But it is clear that it is near.

The Trumpet believes it knows who will usher in the end of Merkel’s reign and bring about a radical shift in Germany. Request your free copy of “A Strong German Leader Is Imminent” for more information.

While Germany is the driving force in Europe, Austria may set the trigger for the radical shift. It was in Austria that Hitler developed his hatred against cosmopolitanism and the multinational character of Vienna. And it might be in Austria that the far right becomes the norm of tomorrow’s Europe. (To learn more about Vienna’s influence on Hitler, read “The World’s Greatest Empire Is Hidden.”)

In the end, Kurz’s ideas will prevail, but they will be enforced and backed by Germany. Kurz knows that without Germany leading it, the EU cannot stand. Europe is watching Austria closely and so should you. Right-wing extremists might soon dominate not only the news but the whole world. Order your free copy of Daniel Unlocks Revelation to learn how events in Europe are leading to the fulfillment of end-time prophecies.

Kurz represents a new, post-Merkel era for Europe. Revelation 17 describes the rise of 10 kings who will drastically change the course of Europe and bring in a time of Great Tribulation. Kurz will likely be one of those kings. Daniel 2:44 prophesies that “in the days of these kings shall the God of heaven set up a kingdom, which shall never be destroyed.” This time is very close.