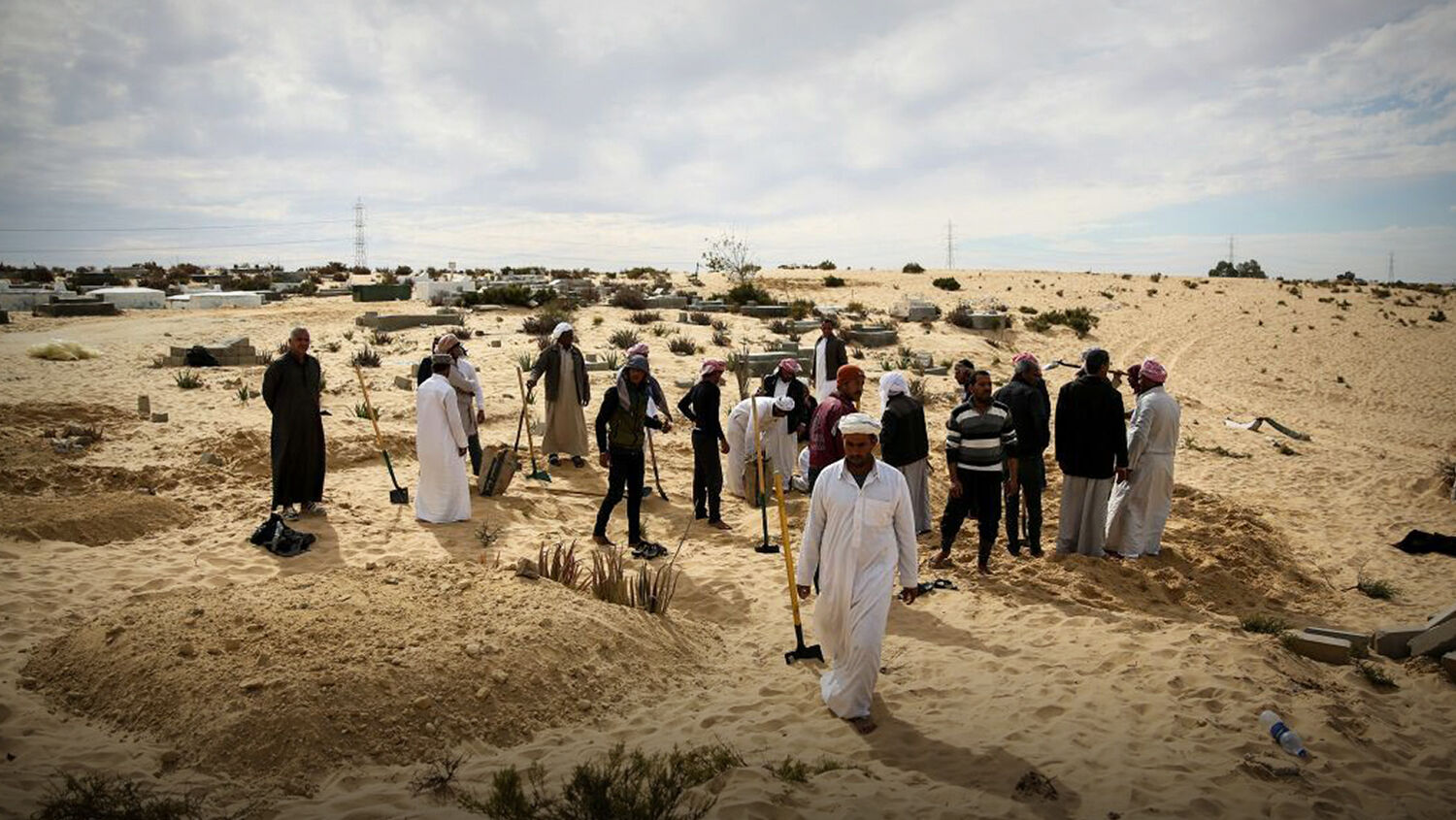 Victims of the Egypt Sinai mosque bombing are buried on November 25. More than 300 people were killed in the attack.
Stringer/Anadolu Agency/Getty Images

Sisi’s attempt to stabilize a volatile region is failing.

The Sinai Peninsula is on fire. Radical Islamic terrorists may be on the run in Syria and Iraq, but not so in the Sinai. For terrorists in the Egyptian desert, bloody business has never been better. The region is ablaze with terrorist attacks against civilians and security forces alike.

According to the Tahrir Institute for Middle East Policy, the region has suffered 1,700 attacks over the last four years. This despite the efforts of Egyptian President Abdel Fattah al-Sisi, who has initiated military crackdowns—and watched them fail. Rampant attacks on his countrymen continue.

The Trumpet has watched Egyptian stability closely because the Bible mentions this nation prominently in end-time prophecies. These prophecies discuss the rise and fall of world powers. Based on the sure word of the Bible, the Trumpet predicts that Egypt will soon undergo a political shift, much like the upheaval it experienced in 2011. Radical Islamic violence in the Sinai may yet play a role in sparking this change.

The latest attack illustrates the rising brutality of terrorists in the Sinai Peninsula.

On November 24, Egypt suffered its worst attack in recent history. In the northern town of Bir al Abed, more than two dozen terrorists attacked a mosque full of worshipers, mowing down or blowing up more than 300 people. The atrocity claimed more lives than the Metrojet airplane bombing in 2015 that killed 224 people—it was splashed across world headlines for weeks.

But since 2015, there have been many attacks: attacks on checkpoints, attacks on police stations, attacks on places of worship. As terrible as the latest attack was, it faded from the world scene almost overnight. Bloodshed in the Peninsula is so commonplace that it is soon buried in the news.

But the people of Egypt will not be so quick to forget.

This latest attack will likely spread discontent among the population. Until now, the terrorists have attacked Coptic Christians or security forces. This time, it was a mosque.

The people of Egypt are angry. They are angry at the terrorists, but also at the government for failing to uphold its end of a bargain.

This was a bargain struck by Sisi when a military coup brought him to power. In exchange for leadership, Sisi promised economic reform and increased security. To his credit, he has tried to fulfill his end of the bargain. But so far, he has failed.

In the Sinai, Sisi has demolished towns and flooded smuggling tunnels. He has amassed troops and carried out air strikes. And he has clamped down hard on terrorists in and around major tourist centers and cities. But the multiple local terror groups refuse to die quietly. Most have taken their operations to the deserts of the Sinai where the military grip is feeble.

And now their attacks are igniting the region. The Peninsula has become a staging ground for terrorist incursions into towns and cities.

As the New Yorker wrote:

The mosque attack is the latest of many challenges facing President Abdel Fattah al-Sisi, a former field marshal, as Egypt heads toward elections next year. For all his military acumen, Sisi has been unable to protect his own people—or even his security forces. Almost a thousand police officers and soldiers have been killed while fighting extremists and insurgents in the past four years. And, despite his cult-like status—his face on candy wrappers, T-shirts and billboards—Sisi has solved few of the problems that sparked Egypt’s chapter of the Arab Spring uprising in 2011.

Terror attacks are creeping toward Cairo and the populated banks of the Nile River. The mosque attack only brings the violence closer to home for Egypt’s citizens. Sisi needs to contain the terrorists. If he fails, the unrest might leap from the Sinai to the Egyptian heartland.

There the terrorists will reach a population already disenchanted with the government.

An Economy Under Pressure

The nation is already in a state of discontent because of its troubled economy. This is, again, due to Sisi’s inability to follow through on promises made at his election. The president has tried to bring about economic reform, but doing so has required the implementation of austerity measures. These measures have hit average Egyptians hard.

First, he slashed food and fuel subsidies. Many Egyptians rely on these to get by, but the subsidies were plagued by the illegal resale of subsidized goods. The International Monetary Fund refused a $12 billion loan until Sisi cut back the system. And cut it he did.

But that wasn’t all. Sisi also floated the Egyptian pound. The currency lost half its value overnight. Inflation leaped 30 percent. No wonder Egyptians are angry. Not only does food now cost more, but their money is worth less.

As Trumpet contributor and Jerusalem correspondent Brent Nagtegaal wrote in August, “This economic double whammy is hitting Egypt’s population hard, and many are fearful it could lead to social unrest the likes of which could be worse than the … Arab Spring.”

Of course, Sisi wouldn’t have taken these steps without good reason. He hopes to see the payoff in jobs, investment and growth soon. His career may depend on it. The president is gambling that the benefits will arrive before the economic pains spark civil revolt.

Remember, economic instability helped fuel the fires of the 2011 Arab Spring. Only this time, there is violence in the Sinai to add to the mix.

The inability to afford food and fuel are the sort of issues people become upset about and—if it gets bad enough—revolt over. But when terrorists kill 300 people in your hometown or nearby mosque, that can tip a population over the edge.

With elections around the corner, Sisi has his work cut out for him. Crackdowns on nongovernmental organizations (ngos) and media outlets might shield him from international condemnation, but it won’t save him from his own people. Egyptians have suffered plenty of terror attacks since Sisi’s rise to power. With no end in sight, expect the people to grow more frustrated with the administration.

Whether it is the economy or national security that tips Egypt over the edge, one thing is certain: It is going to happen. How can we make this claim? Because of Egypt’s role in Bible prophecy.

In Daniel 11:40, we see the rise of a prophesied “king of the south,” radical Islam led by Iran. This power boasts an alliance of nations that includes Libya, Ethiopia and Egypt. Watch the short video below for a more detailed explanation.

Shortly after this power comes on the scene, we see the rise of another alliance, this one found in Psalm 83. Some of the nations in this alliance include Saudi Arabia, Jordan, Turkey, Lebanon and Syria. The next short clip will help you understand the rise of this power.

Today, Egypt’s government is far closer to the Sunni powers of the region than it is to the Shiites. If these prophesied alliances are to form, we must see a dramatic shift away from Sisi’s current stance.

The moderate government in Egypt is being threatened by a popular and growing Iranian-aligned, anti-American, radical Islamist movement. In fact, we expect the most radical elements within Egypt to assume control and directly ally themselves with Iran. This worst-case scenario for the U.S. is just what the Bible prophesied will occur soon.

This occurred in 2012 with the election of the Muslim Brotherhood, but it was removed from power by Sisi’s coup in 2013. We fully expect a similar and more lasting scenario very soon!

Mr. Flurry continued, “Daniel was written over 2,500 years ago. God knew Egypt would retain the same name it had almost from the beginning and that it would ally itself with Iran! That’s something to get excited about because one of the foundational proofs of the Bible being God’s Word is fulfilled prophecy!”

This is why we watch Egyptian unrest so closely. These earthshaking alliances are forming as we speak. Keep an eye on Egypt. In 2011, unrest turned a relatively stable government on its head overnight. With the violence in the Sinai and Egypt’s economic woes, an Arab Spring could happen again.