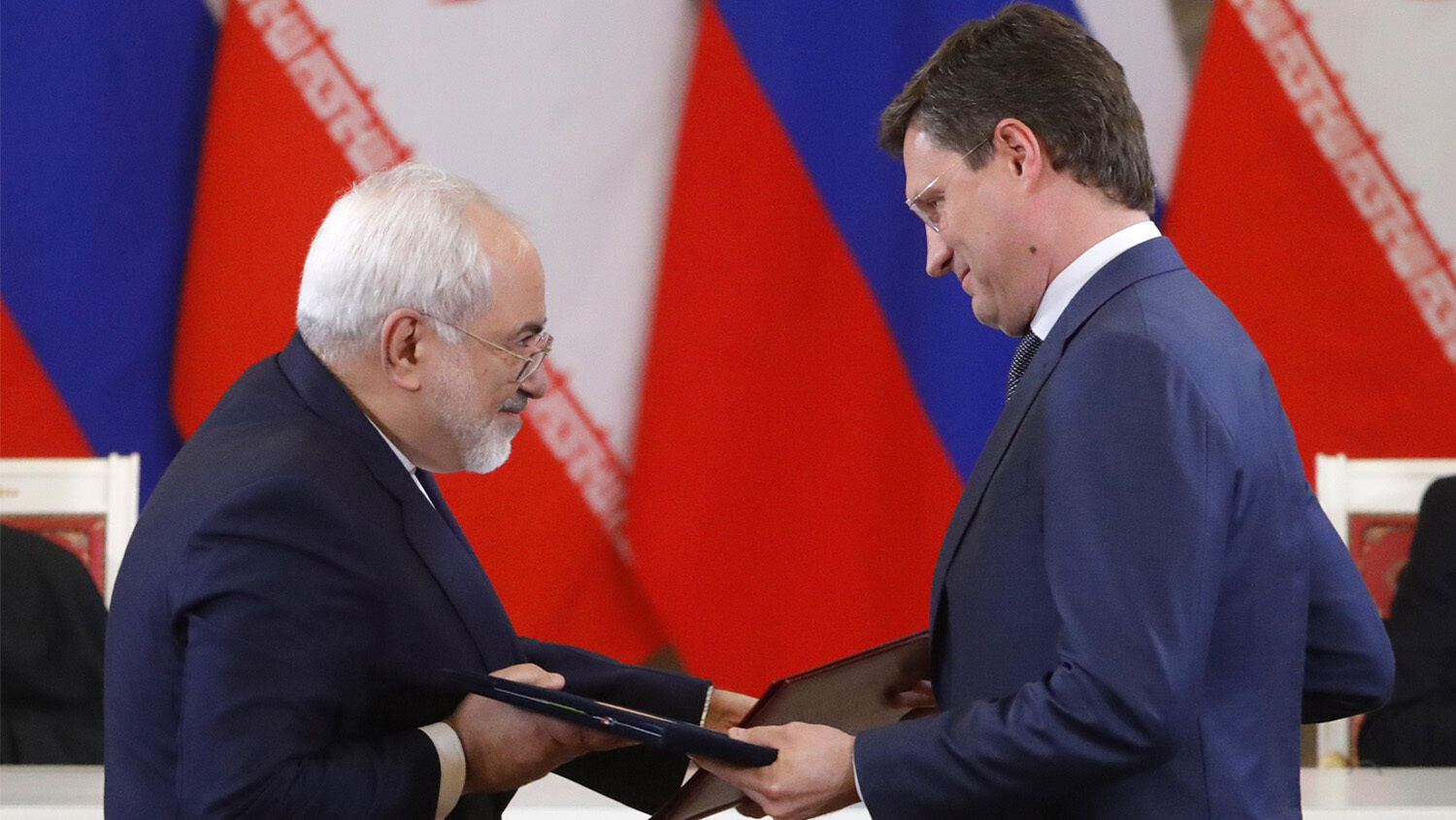 Three trends to watch as Russians and Iranians work together

Iran and Russia signed a series of energy deals worth $30 billion on November 1 as Russian President Vladimir Putin visited Tehran to meet with his Iranian counterparts.

The deals are more than economic. Both Russia and Iran stand to make significant geopolitical gains. And those gains come at the expense of the United States.

The six deals range from developing oil and gas fields to training Iranian personnel. The deals could boost Iranian oil exports by 1.1 million barrels per day.

Roseneft chief executive Igor Sechin announced the deals in Tehran last week. Sechin has long been a close ally of Putin, and Rosneft will be joining the likes of Gazprom in heading up the developments. Rosneft is a Kremlin-controlled oil company. As such, it has dealings in Iran, Venezuela, Saudi Arabia and elsewhere. It is effectively a tool of the Kremlin to advance Russian interests at America’s expense.

But how do the deals help Russia? First, they thwart the Obama-era hope of converting Iran into a challenger to Russia. This applies, particularly to Europe. The Europeans are heavily dependent on Russian gas and oil. Part of the Obama administration’s P5+1 plan was to bring Iran in from the cold. Doing so was meant to open Iran to European trade, breaking the reliance on Russia.

But Iranian gas won’t be reaching Europe anytime soon. Iran uses most of its natural gas to warm its citizens in the winter. Underdeveloped systems mean Iran only exports around 6 billion cubic meters every year. Most of that runs to Iran’s immediate neighbors. And there aren’t many major upgrades coming soon. So far, there has been one $4.8 billion deal from French company Total back in July. That’s all.

As for oil, Russia is now taking much of what Iran produces.

Before it was subjected to international sanctions, Iran produced 3.6 million barrels of oil per day. So 1.1 million barrels per day to Russia is a large portion of Iran’s oil. Combine that with the 600,000-plus barrels per day that Iran sends to China, 400,000-plus to India, 150,000-plus to Japan, 350,000-plus to Korea. These numbers vary month to month, but they show that some of America’s biggest competitors are taking the lion’s share of Iran’s oil. There’s not a huge amount left to go to Europe.

Secondly, the deal undermines U.S. interests. Russia stands to gain notoriety as a Middle East alternative by dealing with Iran. Rosneft has already made inroads into the region where America has blundered. Iran is one example. With U.S. hostility ratcheting up, Russia is the alternative. Rosneft has also made deals with Saudi Arabia and Kurdistan. Both oppose Russia’s Mideast dealings, but that didn’t stop them signing oil deals.

As the New York Times reported:

Rosneft is “trying to create opportunities that can be extremely valuable in geopolitical ways,” said Amy Myers Jaffe, an energy security expert at the Council on Foreign Relations. “They really give the Russian government unbelievable leverage on questions of importance to the United States.”

As the U.S. loses its grip on the Middle East, Russia is capitalizing.

For Iran, the benefits of the deal are many. There is the obvious financial incentive. There is also the oil-for-goods deals. In the past, these have reached $20 billion. This gives Iran Russian technology for military, industrial and domestic use. But economics is only one incentive.

Strengthening ties with Russia means a stronger presence in the region. Iran’s efforts in Syria, Yemen and elsewhere are far more serious when backed by sponsors in Moscow.

The undermining of America’s sanctions is also a big benefit. With talk of reimposed sanctions and scrapping the Joint Comprehensive Plan of Action, Iran needs deals now. Russia has already proved it isn’t afraid of going against U.S. interests. Breaking away from dependence on America will strengthen Iran’s immunity to sanctions.

The deal also helps further isolate America. The transactions will be in rubles, not U.S. dollars.

This helps de-dollarize Iran’s economy. Less reliance on the greenback means less impact from sanctions. It weakens American leverage over Iran. This is known as Iran’s “Economy of Resistance” strategy. According to Critical Threats, the doctrine is “intended to make the Iranian economy resistant to all external economic shocks in the long term, including Western sanctions ….”

Dealing in a currency other than the U.S. dollar is a growing trend among America’s rivals.

In September, we wrote on Venezuela publishing oil prices in yuan. We also covered China’s plan to launch a crude-oil-futures contract in yuan. In his article, writer Jeremiah Jacques noted that Saudi Arabia could make the swap to the yuan.

On November 3, the Trumpet highlighted Iran’s call to ditch the dollar.

“By ignoring the negative propaganda of the enemies who seek to weaken relations between countries, we can nullify U.S. sanctions, using methods such as eliminating the dollar and replacing it with national currencies in transactions between two or more parties; thus, isolate the Americans,” Supreme Leader Khamenei said.

It looks as though Russia was listening.

In his November 3 article, Trumpet writer Andrew Miiller noted comments from a Putin adviser. “The more aggressive the Americans are, the sooner they will see the final collapse of the dollar, and by getting rid of the dollar, this would be the only way for victims of American aggression to stop this onslaught,” Sergey Glazyev said in an interview with tass. “As soon as we and China dump the dollar, it will be the end of the U.S.’s military might.”

The $30 billion energy deals highlight the growing trend of isolation. And it plays right into biblical forecasts.

In a March 1968 co-worker letter, Plain Truth founder Herbert W. Armstrong wrote, “If the dollar is devalued, inflation will almost surely result, and eventual economic collapse for the United States.”

Referring to prophecies such as those in Leviticus 26 and Deuteronomy 28, he continued: “Those of you who truly believe the prophecies of your Bible know such economic collapse is prophesied to happen! … We have shown how God prophesied a virtual trade war will get underway against the United States and Britain—and how our national economics will falter, and then collapse!”

You can read more about America’s financial 9/11 in our free booklet He Was Right. Also, watch the below commentary by Trumpet writer Jeremiah Jacques.

The signing of the deals between Russia and Iran ties into a range of prophecies from the Bible.

Russia’s rise is well documented by the Trumpet. You can read about it in our free booklet Russia and China in Prophecy. Putin’s efforts to restore Russia to its Soviet glory days are working. And it all gels with what the Bible records. Watch the following clip for an overview of this exciting prophecy!

Prophetically, the Trumpet points to scriptures in Daniel 11 that show Russia will not come to Iran’s aid when Tehran needs it the most. The Asian power bloc will watch as Europe attacks the Middle East with a “whirlwind.” But in the meantime, Iran and Russia are making the most of similar interests.

Russia’s $30 billion deal with Iran plays a part in establishing Iran as the “king” over the Middle East. You can learn more about this power in the video below.

This deal does not mean the prophecies are fulfilled. The deals do, however, play their part toward the prophetic fulfillment. We are seeing the rise of anti-U.S. oil-based economies like Russia and Iran. Your Bible says these powers, in particular, will rise up in our lifetime. And simultaneously the U.S. will be cut off by world powers—an economic siege! These are incredible prophecies recorded down through the ages for us today! If you haven’t already, be sure to go back and watch the linked videos and order the free literature. In exchange for a moment of your time, you can have insight unknown or overlooked by most of the world. But it is insight based on “a more sure word of prophecy” (2 Peter 1:19).