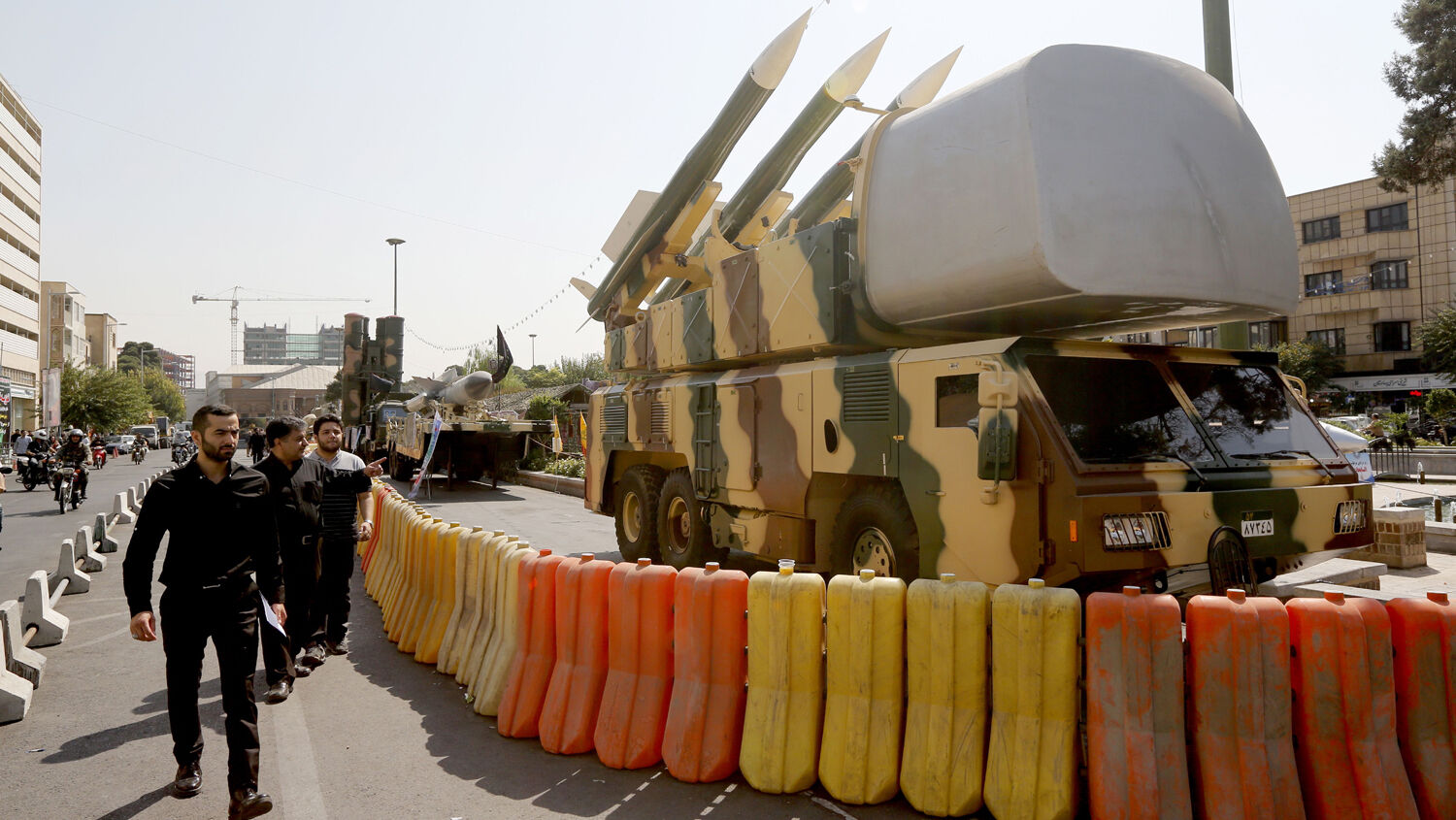 People walk past missile defense systems displayed on Baharestan square in Tehran on September 25, 2017, on the occasion of the annual defense week which marks the anniversary of the 1980s Iran-Iraq war.
ATTA KENARE/AFP/Getty Images

Iran continues to push against the United States—and Europe.

Over the last month, Iran’s military leaders have threatened on several occasions to attack American bases with ballistic missiles and have warned United States forces in the region to get out of ballistic range.

These latest military threats are partly a response to America’s own threats to impose new sanctions on Iran for noncompliance with the Joint Comprehensive Plan of Action (jcpoa) nuclear deal.

“[I]f the U.S. new sanctions act comes into action, the [United States] should transfer its regional bases to 2,000 kilometers [1,200 miles] away, that is as far as the range of Iranian missiles,” threatened Iran’s Islamic Revolutionary Guard Corps Maj. Gen. Mohammed Ali Jafari on October 8. Three weeks later, on October 31, he warned that any new sanctions “will increase the Iranian nation’s determination to increase its defense and missile power and [the U.S.] will see an increase in the range and precision-striking power of missiles.”

“Based on the policies specified by [Iranian Supreme Leader Ayatollah Ali Khamenei], the range of our missiles is limited to 2,000 kilometers,” Jafari said. “[B]ut we have the capability to increase the range.”

Even if Iran never increases the range of its ballistic missiles, that 2,000-kilometer policy was not only pure propaganda intended to allay concerns about Iran’s increasingly belligerent programs, it was utterly meaningless. Jafari himself explained: “At present, [the 2,000-kilometer range] is sufficient because the Americans are in a 2,000-kilometer radius from our country and their attacks will be responded [to].”

Iran’s continued ballistic missile program is direct violation of United Nations Security Council Resolution 2231. While it currently is not a technical violation of the nuclear deal, that illegal missile program will violate the jcpoa the moment Iran mounts nuclear warheads on its arsenal of missiles.

If Iran can so brazenly defy the 15-member Security Council, what can stop it from defying the so-called P5+1 nations with which it signed the jcpoa?

Many astute observers are warning that the Iran nuclear deal has not placated Iran. Quite the contrary, as U.S. Rep. Ron DeSantis told the Washington Free Beacon, “Iran’s behavior … has only seemed to get worse. … The present course is untenable and Iran’s threatening behavior is likely to increase in frequency.”

In 1983, Iranian-sponsored terrorists conducted the worst attack on U.S. Marines since World War ii by killing 241 American servicemen at U.S. Marine barracks in Lebanon. It was largely because of that attack that the U.S. officially designated Iran a state sponsor of terrorism. And Iranian terrorism has not relented since.

It is therefore conceivable that Iran—directly or via proxies—could attack a U.S. base.

Whatever comes of Iran’s threats, it is inconceivable that the U.S. will back away 2,000 or so kilometers away from Iran. Representative DeSantis, like other American leaders, wants “Congress to proceed with additional secondary sanctions,” and perhaps not much more.

Adrian Rankine-Galloway, a spokesman for the U.S. Department of Defense, said the United States is “reviewing the entire breadth of our security cooperation activities, force posture, and plans” and “identifying new areas where we will work with allies to put pressure on the Iranian regime, neutralize its destabilizing influences, and constrain its aggressive power projection, particularly its support for terrorist groups and militants.”

Whatever comes of America’s threats, it is also inconceivable that American leaders will deal a decisive military blow to Iran.

But it is conceivable that Europe will.

As unlikely as it may sound, Bible prophecy guarantees that a European power will decisively and conclusively deal with Iran.

Iran’s missiles can currently reach as far west as Lithuania, Poland, Slovakia, Hungary, Croatia, Bosnia and Herzegovina, and southern Italy. Unlike with U.S. bases, relocating these nations beyond Iran’s ballistic missile range is obviously not an option.

It could be easy to ignore these realities when there is so much tension between Iran and the U.S. right now. Iranian mullahs, after all, still regard the U.S. as the “Great Satan.” But as that tension increases, Iranian aggression will also increase. That aggression will certainly be felt beyond America’s interests in the region.

It could also be easy to ignore these realities if you listen to some of Europe’s current leaders. The European Union, Germany, France and Britain, among others, have been staunch supporters of the same jcpoa nuclear deal that paradoxically is emboldening Iran.

That is not to say that the current leaders in Europe want an already belligerent Iran to go nuclear. They don’t. But their idealist school of thought will not solve the Iran problem. As we indicated on October 28, Europe’s current leadership is seemingly at odds with some intelligence organizations in Europe, which condemned the Iran deal and sounded alarms about Iran. One report from the German state of Saxony-Anhalt said Iran “is working on its missile program unabated” (Trumpet translation). “With ballistic medium- and long-range missiles, it will be able to not only threaten Europe,” but other regions as well.

Europe’s stance on Iran can easily yet dramatically change with a change in leadership, and the Bible prophesies about exactly that.

The current state of affairs regarding the United States, Iran and Europe squares up perfectly with Bible prophecy.

Request our free book The United States and Britain in Prophecy to understand why America’s influence, especially in the Middle East, will continue to diminish. Also, request our free full-color booklet Germany and the Holy Roman Empire to clearly see why a German-led Europe is set to become the world’s next superpower. Finally, request The King of the South to learn more about Iran’s prophesied aggression and how it will be stopped.

In the introduction to The King of the South, Trumpet editor in chief Gerald Flurry writes:

“And at the time of the end shall the king of the south push at him: and the king of the north shall come against him like a whirlwind, with chariots, and with horsemen, and with many ships; and he shall enter into the countries, and shall overflow and pass over” (Daniel 11:40). Both powers are rising fast on the world scene right now.

Mr. Flurry then goes through a study of the Hebrew words in the Daniel 11 prophecy to show the militaristic nature of the “push” and the “whirlwind” response.

He writes later in the booklet:

Mr. Flurry first published The King of the South in 1996. He last updated it in 2016, detailing how virtually every major news headline in the Middle East over the years has substantiated Bible prophecies about Iran’s aggressive, pushy nature.

Request or download your free copy of The King of the South and understand why Iran is all over the news.