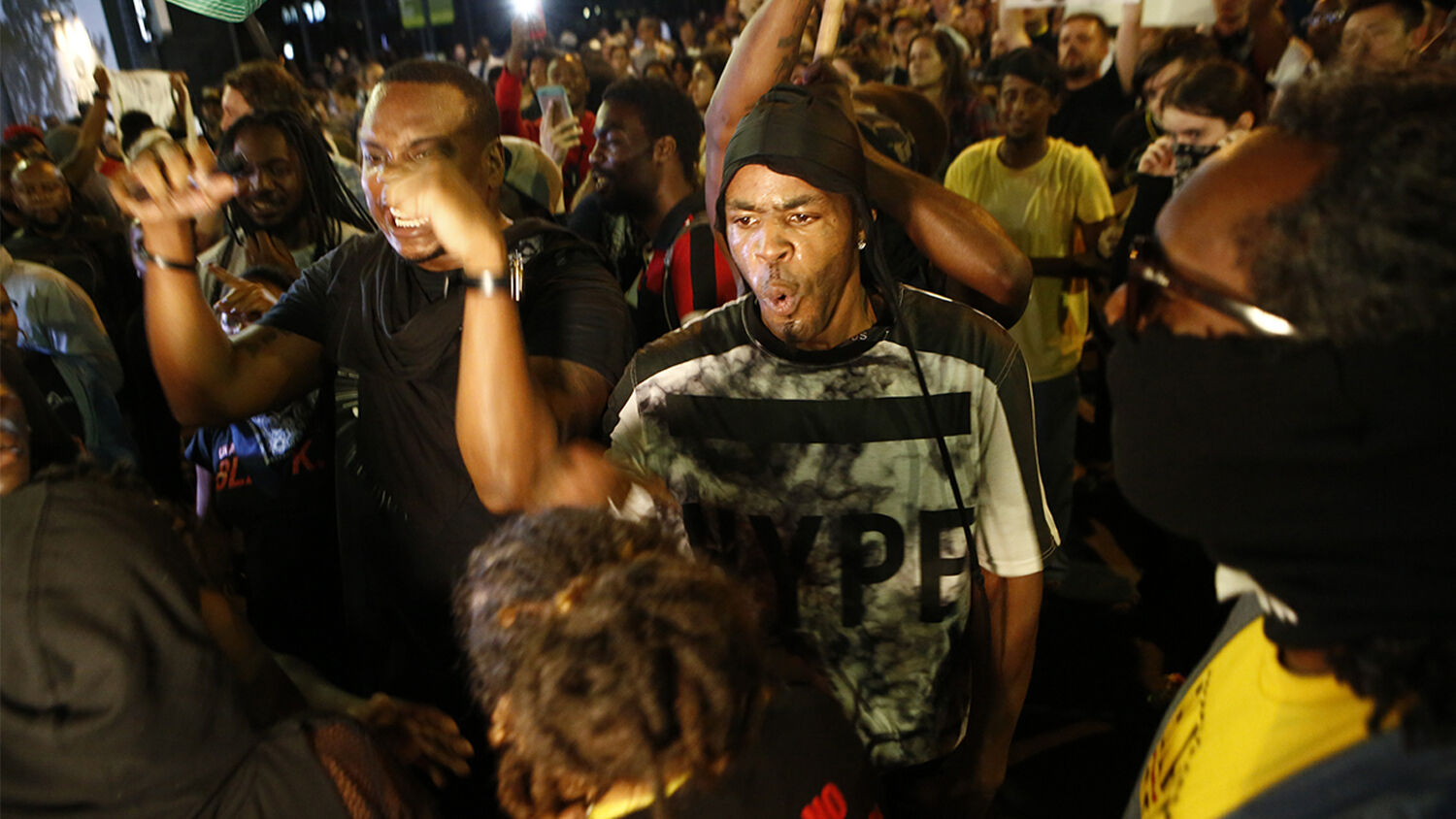 Black Lives Matter activists march in the streets as they protest the death of Keith Scott September 22, 2016 in Charlotte, North Carolina.
Getty Images

The Sydney Peace Foundation has awarded Black Lives Matter (blm) the 2017 Sydney Peace Prize. It is the first time a movement rather than an individual has won.

Founded in 1998 as an attempt to promote “peace, justice and universal human rights,” the nonprofit Sydney Peace Foundation selects a recipient each year from anywhere on the globe. According to the organization’s website, “By awarding Australia’s international prize for peace, we recognize leading global peacemakers, ensure their voices are heard, and support their vital work for a fairer world.”

The same website is awash with praises to blm. Understandably, it can be hard to see the looting, rioting, murder and call to arms from across the Pacific Ocean. But if the Peace Foundation stands to “support their vital work” then it must stand in support of the following.

Perhaps one of blm’s most glaring flaws is how it demonizes the police. “Every 28 hours, a black person is murdered by police,” said activist Cherno Biko in an interview with Fox News political commentator Megyn Kelly. “It feels like we’re in a war.” That would have to mean 313 innocent members of the black community are systematically murdered by police every year.

Over the 13-year period from 1999 to 2011, the Centers for Disease Control and Prevention reported that 1,130 blacks were killed by police officers. That averages out to 87 fatalities per year, compared to an average of 165 whites killed by police each year for the same period. The number of blacks killed by police actually declined 40 percent between 1968 and 2011, even as the African-American population rose by 22 million.

There are cold, hard facts. Read more about them here.

blm rode in on the wake of wrongful accusations leveled against George Zimmerman, and again in the Michael Brown case. Both incidents and their trials saw looting, rioting and mob rule at the hands of the blm. Both incidents also saw blm supporters baying for police blood despite a black-inclusive jury exonerating the accused officers. Worthy of a peace prize?

Ties to the Black Panthers

The Black Panther Party was a black nationalist and revolutionary Marxist organization. It was active in the United States from 1966 to 1982. Its core practice was sending out armed citizen patrols to confront local police officers. Between the autumn of 1967 and the end of 1970, nine police officers were killed and 56 were wounded in altercations with the Black Panthers.

Assata Shakur, an African-American activist and member of both the Black Panther Party and Black Liberation Army, is upheld as a key influence in blm.

As Trumpet editor in chief Gerald Flurry wrote in the May 2016 print issue:

“Assata Taught Me How to Fight” is now a common placard seen at Black Lives Matter protests.

Like the Black Panthers, the Black Lives Matter movement is also becoming known for its chants comparing American police officers to pigs. “Pigs in a blanket, fry ‘em like bacon,” is one variation used prominently at a rally in Minnesota last year.

Again, this is the organization deemed worthy of a peace prize by the Sydney Peace Foundation.

blm’s disdain for the United States Constitution might carry less weight for non-U.S. citizens. But when it is understood, it shows blm’s true intent.

Blake Simons, a University of California–Berkeley student and Black Lives Matter activist, wrote a chilling article on Nov. 4, 2015. “Our Black Lives Matter protests have stormed the country, yet cops continue to kill us daily, and the judicial system continues to justify our deaths with acquittals, non-indictments and light sentences—all in the name of upholding the Constitution,” he wrote for the Afrikan Black Coalition group. “I have come to realize that the Constitution is the root of virtually all our problems in America” (emphasis added throughout).

Mr. Flurry wrote, “Today, activist critics claim that local law enforcement is fundamentally racist, and that the solution is federal intervention. There is no evidence to support this criticism—and no evidence that federal policing would solve anything. It really amounts to a federal power grab!” (op cit).

It is time to claim the Declaration of Independence and apply it to our struggle as colonized black people in America. The United States has declared war against us; it is time we demand a new constitution or tell America that she will get the bullet.

Does that sound like the mindset of an organization intent on fostering peace? How do you suppose Australians would react if the Aborigines told us we need to scrap our own Constitution or “get the bullet”? Would everyday Aussies take that as a peaceful statement?

‘The Way of Peace They Know Not’

This article is not intended to single out the Sydney Peace Foundation as the only organization that has fallen for blm’s lies. With significant help from America’s liberal left, blm has gone mainstream. Beyoncé’s backup dancers raised the Black Panther fist at the Super Bowl while former President Barack Obama weighed in on racially charged cases before even hearing the facts.

Now blm is celebrated as a peacemaker while America’s law enforcement is demonized! And the radical machinations of blm are celebrated as a step toward peace? Race relations have never been worse! But the Sydney Peace Foundation decision shows the mindset of Australia’s left wing is not too dissimilar from its American counterpart.

If you want to know more about blm, its agenda, and where it is leading American society, then request a free copy of Gerald Flurry’s booklet America Under Attack.

If people consider blm a peaceful organization, then truly, as Romans 3:17 states, “the way of peace they do not know” (New International Version). God prophesies that men will not know the way to peace in our time—Australia included!

God does provide a solution—but few choose to heed it.

Australia might not suffer quite the same crippling race relations that America does, but we have our own set of unique problems that threaten our society. There is a way to solve them all, and it doesn’t start with rewarding the divisive actions of Black Lives Matter.