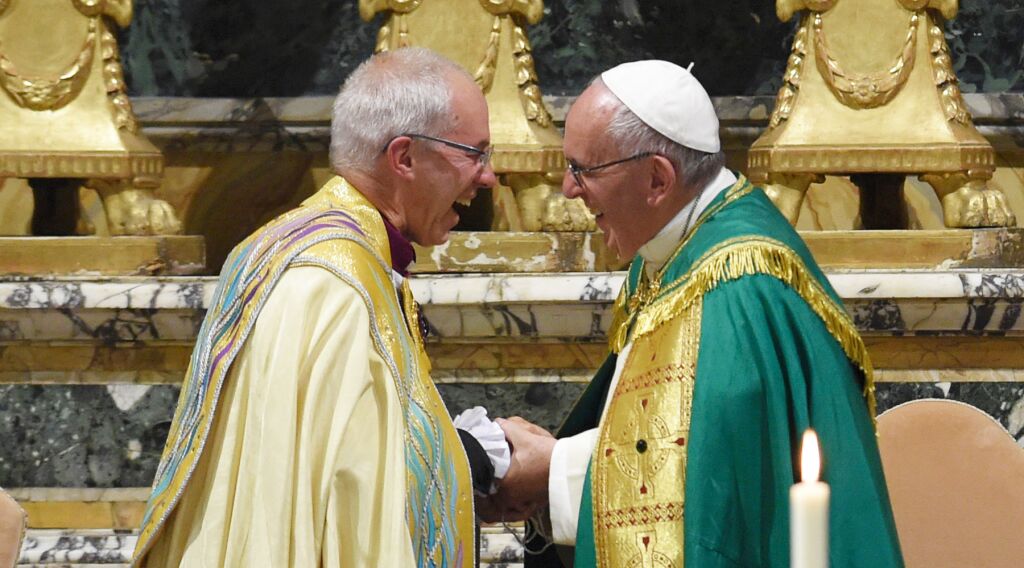 The pope is making major progress in unity with the Anglican Communion, Eastern Orthodoxy and Lutherans.

The pope and archbishop of Canterbury prayed together publicly for the first time since the churches split nearly 500 years ago. Pope Francis and Archbishop Justin Welby held a combined Anglican Evensong and Catholic Vespers service on October 5 at the church of San Gregorio—the church from which St. Augustine was sent to convert England to Catholicism in a.d. 597.

The archbishop was visiting Rome to celebrate the 50th anniversary of the Anglican Center, an embassy of sorts for the Anglican Communion in Rome. Archbishop David Moxon, the director of the center, said that the two churches are “85 percent” in agreement. He said that seeking unity is “part of our dna.”

During the weeklong celebration of unity, the churches commissioned 19 pairs of bishops, each comprised of one Anglican and one Catholic, to work on unity around the world. The pairs will look at practical ways to unite the churches, even considering preaching from each other’s pulpits.

The pope and archbishop issued a common declaration stating that differences in the groups “cannot prevent us from recognizing one another as brothers and sisters in Christ by reason of our common baptism. Nor should they ever hold us back from discovering and rejoicing in the deep Christian faith and holiness we find within each other’s traditions.”

The meeting comes just two weeks after the Catholic and Orthodox churches reached an important agreement that will pave the way for greater unity between the churches that formerly split in 1054. On September 21, the Joint International Commission for Theological Dialogue between the Orthodox Church and the Roman Catholic Church agreed on a document titled “Synodality and Primacy During the First Millennium: Towards a Common Understanding in Service to the Unity of the Church.”

Catholic World News wrote that the agreement “represented a substantial victory” for the joint commission. “The agreement on the historic function of primacy is significant because the question of papal primacy is one of the key stumbling blocks in Catholic-Orthodox ecumenical discussions,” it wrote. “The statement acknowledged that the bishop of Rome enjoyed primacy, while also noting that synods set directions for the church. The document reportedly says that the pope did not exercise canonical authority over the Eastern churches, but acted as ‘first among equals.’”

Speaking in Georgia on October 1, Pope Francis told Catholics not to try and convert Orthodox Christians. “There is a very grave sin against ecumenism: proselytism,” he said. “We should never proselytize the Orthodox! They are our brothers and sisters, disciples of Jesus Christ.”

Accusations that the Catholic Church is trying to poach Orthodox members is another wedge dividing the two. In strongly rejecting this, the pope is attempting to remove another barrier to unity.

During his visit, the pope also told Christians “to avoid putting first disharmony and divisions between the baptized, because what unites us is much more than what divides us.”

“The holy tunic, a mystery of unity, exhorts us to feel deep pain over the historical divisions which have arisen among Christians: These are the true and real lacerations that wound the Lord’s flesh,” he said.

On October 31, the pope will travel to Sweden to mark the beginning of the 500th anniversary year of the Protestant Reformation. That event will begin a yearlong series of trips and scheduled events designed to foster unity between the Catholic Church and Lutherans.

Lutheran leaders have said that they hope to fully heal their divide with Rome during this 500th anniversary year.

Catholic-Lutheran unity has already taken great strides over the past couple of decades. In 1999, the Lutheran World Federation signed a Joint Declaration on the Doctrine of Justification with the Vatican. The doctrine of justification was at the heart of Martin Luther’s disagreement with the Catholic Church, which led to his excommunication. Now that disagreement has been overcome.

In 2007, the Catholic, Lutheran, Orthodox, Methodist, Anglican and Armenian-Apostolic churches in Germany all agreed to recognize each other’s baptisms as valid.

“Five hundred years ago, wars were fought over the very issues about which Lutherans and Roman Catholics have now achieved consensus,” said Elizabeth A. Eaton, the presiding bishop of Evangelical Lutheran Church in America. Some points of disagreement remain, and talk of achieving full communion in 2017 has died down in recent years, but so much of the heavy lifting has been done already.

This push for unity with Christians of all different kinds has been one of the biggest themes of Francis’s papacy.

In 2013, America’s largest Presbyterian church, along with other major Protestant groups, signed an agreement with the Catholic Church recognizing each other’s baptisms. The Catholic Church is even making progress with Pentecostals. Pope Francis has held receptions with top American televangelists, including Joel Osteen’s visit in 2014.

In 2014, the pope sent a recorded message to Kenneth Copeland Ministries, a large Pentecostal group, seeking unity. “Brothers and sisters, Luther’s protest is over. Is yours?” asked a speaker at the event. The pope also beseeched the audience, “I am [yearning] that this separation comes to an end and gives us communion.”

In 1963, in the midst of the Second Vatican Council, the Plain Truth reported:

Today, the time is ripe—according to official Catholic views—for making the final effort to unite the church bodies of the Christian world. The mighty problem of achieving unity is twofold. First, it involves reconciliation of the Orthodox Schism that officially commenced in 1054 and divided the churches in the East—Greece, Russia, the Balkans and the Near East—from Rome. Second, it involves restoration to the Roman communion all Protestantism, which developed from 1517 onward.

Both these divides are now very close to being healed. For more on what this unity will mean for the world and how it will be achieved, read the article “Returning to the Fold” from our free booklet He Was Right.