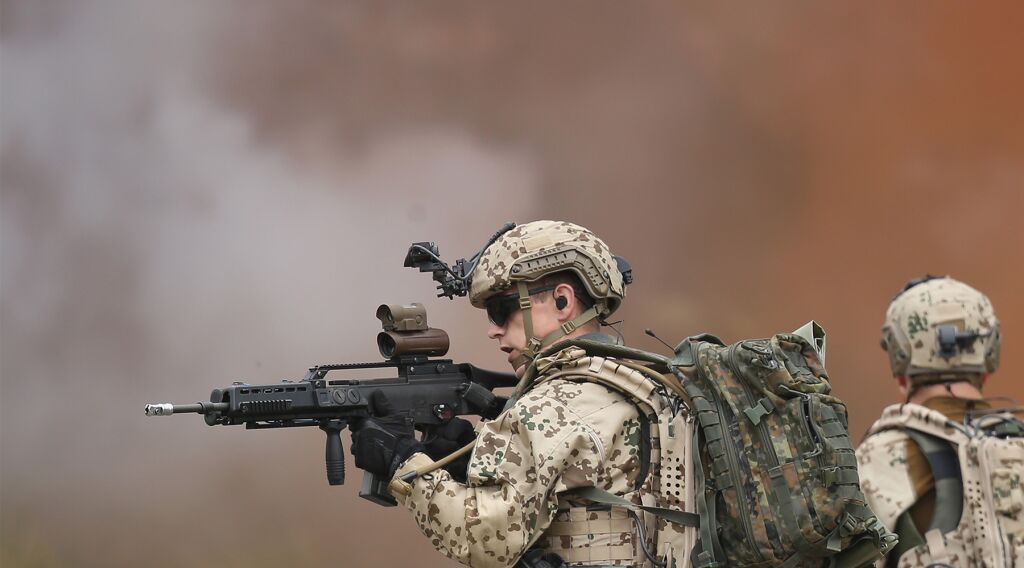 What do you do when you can’t change a law that you feel needs to be changed? Redefine it. Any child bent on bypassing the orders of his parents knows how to adroitly reason around wording, find loopholes, and justify disobedience. Germany is now taking this same path. The “parents,” in this case, were the founding fathers of modern Germany. The broken order, as recorded in the Basic Law, essentially states: You shall not use your army at home, neither shall you combine it with the police.

Defense Minister Ursula von der Leyen found the loophole in one of the amendments of this law. In the latest white paper for the Bundeswehr, published on July 13, she wrote:

In Article 35(2), second sentence, and (3), the German constitution expressly allows the deployment of the armed forces at home at the request of a federal state or at the instruction of the German government in the event of natural disasters and serious accidents (emergency situations). Large-scale terrorist attacks can be considered to be such an emergency situation. The German Constitutional Court has confirmed that, in order to assist the police in effectively managing emergency situations, the armed forces may, in certain conditions, perform sovereign tasks and exercise powers of intervention and enforcement.In the context of present-day threat situations, the deployment of the armed forces in effective disaster response plays an important role within the narrow limits of unusual emergency situations and in accordance with current constitutional law. It is important to foster good cooperation between the federal and state authorities that work together in the event of a disaster and to conduct exercises for them. We must be able to rely on them as part of a common and responsible approach to ensuring security in our country.

An earlier draft of the white paper, circulated in April, had indicated that the constitution needs to be changed to allow for Bundeswehr missions at home. This caused an uproar, especially among the Social Democratic Party of Germany, which strongly oppose such a change. But the final version, quoted above, says such a change is not actually necessary, since terrorist attacks can qualify as “serious accidents” and “emergency situations.” Von der Leyen did not specify exactly what conditions would allow such a deployment because she knows that, by the letter of the law, these conditions would be almost impossible to fulfill.

In March, the political editor for Die Welt explained what would be required to fulfill those required conditions (Trumpet translation throughout):

[According to the ruling in 2012] it would need to be an “event of catastrophic dimensions.” Not every dangerous situation, “which the country is unable to manage with the police alone,” is already an “unusual exceptional situation.” In any case, the use of armed forces, including “specific military deterrent,” would be the “last resort” eligible and must be ordered by the “federal government as a council”—accordingly not from the defense minister alone.

Consider the recent example of the July 22 terrorist attack in Munich. When this news began to break, the Bundeswehr was put on the alert because of an “unclear situation,” which many believed included multiple gunmen. Klaus Bouillon, head of the Conference of German Interior Ministers, explained the reason for the alert: “Had there been a terrorist situation in Munich with three offenders at three locations simultaneously, with perhaps hostages, then the police would have very quickly reached its limits.”

But not all German leaders agree that such a situation would warrant deployment of the German military on German streets. In his commentary for Handelsblatt, Police Union Chief Rainer Wendt called the plans to allow domestic Bundeswehr missions a violation of the constitution: “The men and women who made the Basic Law knew exactly why they imposed strict limits on the domestic deployment of forces. Trying to override these limits through a ‘white paper of the Bundeswehr’ is nothing but willfully violating the constitution.”

Wendt explained that he thinks such deployments could desensitize the public to conditions that will lead to grave danger:

And like the frog that is meant to slowly get used to the heat in the warm water, politicians want to slowly get us used to the illegal status: “just a little army” mission, only a few military police here, a few roadblocks there. The signal is devastating: Starting from the first successful attack, we have overridden one of the most valuable parts of our society, our Basic Law.

The Basic Law specifically prohibits the combination of the police and Army. To bypass this, von der Leyen says Germany is not planning to combine the two but only for the Army to support the police and remain under police leadership. Wendt said it is ludicrous to think that the forces involved would abide by this suggested hierarchy: “[A]s if Bundeswehr generals would report to the local police officers and take orders from them.”

Despite protests from the likes of Wendt, Chancellor Angela Merkel and von der Leyen announced after the latest terrorist attacks that the Bundeswehr will practice together with the police before the end of 2016.

Some politicians from the Christian Democratic Union and the Christian Social Union have been planning for such a development for decades. And now it is on the cusp of being allowed. The danger many fear is that once the Bundeswehr is on the streets, it could be used to help a dictator rise or to sustain a dictator’s power—even in the face of opposition. In order to understand why the Basic Law prohibits domestic use of the Bundeswehr, read “The Danger of Deploying the German Army at Home.”