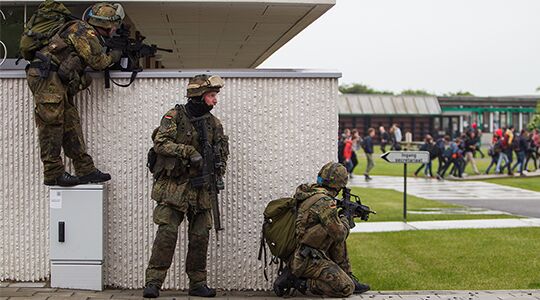 After much debate, a compromise has been made: The German Army can practice with the police.

Calls to domestically deploy the Bundeswehr are growing louder in Germany. Many question: Why can’t Germany do what other countries can? In light of recent terrorist attacks in Europe, the German Defense Ministry wants to change the Basic Law, which prohibits the Bundeswehr from being deployed inside of Germany, it also bans it from combining with police forces. Much controversy has arisen over whether the Basic Law can be changed. But if other countries don’t impose such restrictions on their armies, why is there so much debate about it for Germany?

“We will have to deal with the question of why virtually all other countries in Europe are allowed to use their armed forces under clear legal rules to support the police—and we do not,” German Finance Minister Wolfgang Schäuble told Süddeutsche Zeitung in an interview published on January 15 (Trumpet translation throughout).

Such calls are not entirely new. In recent decades, several attempts have been made to change the Basic Law. Schäuble has desired such changes since the early 1990s. The recent terrorist attacks in Europe have revived discussion on the issue, with new intensity.

On May 23, after much dispute in the German coalition, it was confirmed that the Constitution would not change as Schäuble, Defense Minister Ursula von der Leyen and others had hoped. However, the coalition did decide to allow the Bundeswehr to practice with the police for emergency cases. Even though the goal of a constitutional change was prevented by the Social Democrats (spd), the decision to allow the military to train with the police represents a significant victory for the Christian Democratic Union (cdu) and Christian Social Union (csu). It brings them one step closer to attaining their larger ambitions.

For some Germans, just the thought of seeing the Bundeswehr on streets alongside the police causes horror. They fear the German Army could be used against its own people in protests and demonstrations, as has happened in Germany’s past. During the Weimar Republic era, soldiers were repeatedly used to shut down opposition. This action was legalized by Article 68 of the Constitution of the German Empire. Then, during the time of national socialism, because the police and Army were not clearly separated and shared many responsibilities, it made persecution of the opposition and Jews possible. The police became a part of the Army. Furthermore, Adolf Hitler used the SS paramilitary units against the German population to maintain his power.

After the Nazi regime was defeated, the founders of post-World War ii Germany worked to prevent a repeat scenario. They decided that the German Army should never again be used to suppress citizens by putting down demonstrations and civil uproar. A paragraph was written in the German Basic Law that restricted the Bundeswehr to external security missions. In 1968, this law was undermined for the first time, causing an emergency law to be added. Paragraphs 87a and 35 permit internal Bundeswehr missions only if the police force is overwhelmed.

Schäuble attempted another constitutional change in the 1990s but was unsuccessful. He told Süddeutsche Zeitung in 1996: “The topic will remain on the table until it is implemented the way I proposed it.” He brought it up again unsuccessfully in 2006, when he saw a need to provide more security in the World Cup soccer stadium. When Germany’s highest court issued a ruling on Aug. 18, 2012, allowing the military to be used against threats in the country, we wrote:

The rising threat of terrorism is seen to be what prompted the Federal Constitutional Court to reverse this ruling. Bundeswehr troops can now deploy inside Germany to counter “states of emergency of catastrophic proportions.” They are still prohibited from being used “in reaction to the threat posed by demonstrating crowds.”While the breaking of this taboo does not exactly give the German government dictatorial powers as some are claiming, it does show that government officials are growing more comfortable with the use of military power. As the euro crisis intensifies and domestic unrest increases across Europe, expect Germany to rise up as the dominant military power in Europe.

Von der Leyen continues to work around the Basic Law and has received increasing support. Defense politicians of the cdu and csu put together a strategy paper published on April 28, titled “Framework for the German Security Policy.” The sixth point of the document states that internal and external defense can’t be separated. One might think that this directly contradicts the Basic Law, which stated that both have to be separated, but notice the explanation they gave: “The current security architecture is characterized by the beginning of the Federal Republic. Today, there is no doubt about the constitutional loyalty of the security institutions.”

Are there doubts about the constitutional loyalties of the security institutions? This paper is aiming to change the Constitution! The statement that the Basic Law was made at a time when the main goal was to prevent another Nazi Germany and that there is no such danger today should ring alarm bells in the minds of each observer.

The strategy paper continues, saying that the Bundeswehr has proved to be trustworthy and therefore is allowed to help in crisis situations. Furthermore, it said that the terrorist attacks in Belgium and France have shown that the Bundeswehr will need to support the police within Germany. The sixth point of the paper ends with: “In regards to the security of the population, the principle stands true: ‘Having is better than needing.’” But is it really about the security of the people? The paper itself recognizes the fact that such deployment is not a need.

The same paper also stated that: “Examples from France and Belgium underline the fact that military forces can be helpful in special situations to quickly reestablish security and order.” The ambiguity of the phrase “special situations” could include anything from large protests to terrorist threats to situations that are classified as threats to the democracy. These situations could be taken care of, not only by the police that might not have the capability to handle a civil uproar, but by the military. Those opposed to a constitutional change fear that this would allow the Bundeswehr to be used against the German people as they become a “threat” to democracy. After its revisions, it’s clear that the Basic Law already allows such involvements, but to what extent is not clearly defined. The parliamentary commissioner of the armed forces said in an interview with Nordwest-Zeitung that such use would be very inefficient since the Bundeswehr has not trained for such scenarios.

The latest compromise, however, allows the Bundeswehr to train with the police forces. This contradicts the Basic Law, which prohibits their combination and states that they are to be clearly separated. The past cooperation between the Army and police was dangerous because it left the German population without a defender. Has the spd compromised too much this time? A question that comes up over and over is, can the German government be trusted? Germany’s history says no. But politicians today often ignore the past.

In a speech at the 50th Munich Security Conference, Federal President Joachim Gauck said, “I would like to request that … we too place our trust in this fundamentally reformed country of ours. The post-war generations had reasons to be distrustful—of the German state and of German society. But the time for such categorical distrust is past.”

The belief that Germany has changed is allowing the current government to cast aside many of the restrictions placed on the nation after World War ii. The German stigma is fading as it becomes like any other country. The world is falling in love with Germany and is even promoting these striking changes. It was once said that Germany would never be able to start a war again. Today, Germany is encouraged to be the peacekeeper of the world.

America and Britain should be alarmed by the striking changes Germany is making, but they too trust Germany. The world will be caught by surprise when it sees another dark Germany rise in Europe’s midst. But longtime Trumpet readers will not be caught off guard by these events, which were prophesied thousands of years ago. For more information on how Germany has been burying its past and why you should be alarmed, read “Germany’s Dramatic and Alarming Foreign-Policy Pivot.”