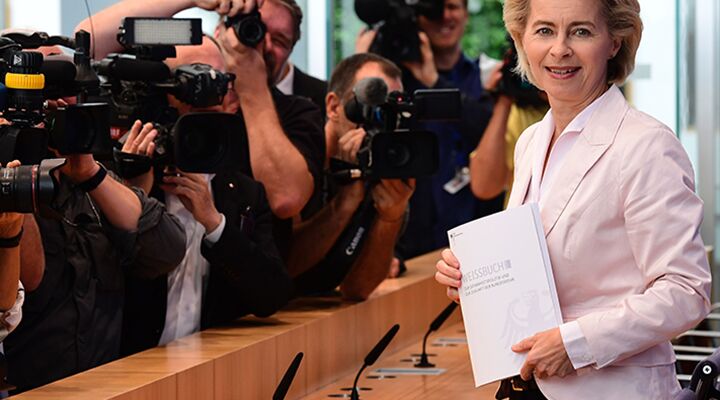 Germany officially casts off postwar military restraint and promises to help ‘in shaping the global order.’

Germany has gone through a radical transformation in how it views its military. In May 2010, German President Horst Köhler said that “a country of our size needs to be aware that … military deployment, too, is necessary if we are to protect our interests such as ensuring free-trade routes or preventing regional instabilities.” At that time, the idea that Germany would use its army to protect economic interests was so controversial that he was forced to resign.

Just six years later, Germany using its army to protect its interests abroad is official government policy, and there is no outcry. Germany’s defense white paper published on July 13 shows how dramatically the nation’s attitude toward its military has changed. The paper lists “countering security threats … to our free and safe world trade and supply routes” as being part of the mission of the German military, almost exactly the same statement that brought down a German president six years ago. The paper is filled with such calls—and they’re not even considered controversial.

This white paper is the latest in a series of important statements from a newly self-confident Germany.

“This is the time of a new Germany,” said Jan Techau, director of the Carnegie Europe think tank, in response to a leaked draft of the paper. “This is probably the first time a German defense white paper is something like important.”

The paper paints a sober picture of the state of the world. “Germany is facing challenges that are unprecedented in their nature and scope,” it states. “The international order, which was established after World War ii … is undergoing profound changes.”

“The renaissance of traditional power politics, which involves the use of military means to pursue national interests and entails considerable armaments efforts, elevates the risk of violent interstate conflict—even in Europe and its neighborhood,” it says.

In this environment, Berlin is coming around to the idea that Germany needs to start projecting its power.

“Germany’s economic and political weight means that it is our duty to take on responsibility for Europe’s security in association with our European and transatlantic partners,” writes German Chancellor Angela Merkel at the start of the paper. “Germany has shown that it is willing to take responsibility in security policy,” writes Defense Minister Ursula von der Leyen in the paper. “We have also shown that we are prepared to take the lead.”

Germany “has a responsibility to actively participate in shaping the global order,” the paper states. It also repeats Germany’s request for a permanent seat on the United Nations Security Council, indicating the importance of the role Germany sees itself playing.

To play this role, Germany needs to spend more on its military. The paper called on Germany to increase its annual defense spending, that is from €36 billion to €60 billion (us$40 billion to $66 billion). Of course calling for more spending is much easier than actually spending more, but Germany’s defense budget is already rising for the first time since the end of the Cold War.

The paper calls for a removal of the cap on the number of soldiers, noting that “the Bundeswehr must have the personnel it needs to perform national and collective defense as well as international crisis management missions in an agile, robust and sustainable manner.”

The paper also says that the army will be more active in the future. The military will help the UN by “increasing our contributions of equipment and personnel to and assuming leadership responsibility in UN missions (civilian, police and military).” It states that the German military is prepared to deploy overseas “from observer missions and humanitarian operations to robust peace enforcement” (emphasis added throughout).

The paper calls for a European military. Germany “is striving to achieve the long-term goal of a common European Security and Defense Union,” it sates. “We are aiming to establish a permanent civil-military operational headquarters in the medium term.”

When presenting the paper, von der Leyen noted that Britain had “paralyzed” these kinds of efforts in the past. The paper had initially been scheduled for publication ahead of the Brexit referendum. It was delayed until after the vote. Few things could turn Brits against the EU faster than calls for military union, and the timing suggests the paper was deliberately withheld until after the vote to prevent this.

The paper calls for Germany to allow European citizens to join the German Army. It notes that this “would not only offer potential for wide-ranging integration and regeneration and thus strengthen the personnel base of the Bundeswehr, it would also send out a strong signal for a European approach.”

The paper also emphasizes the need for “strengthening the Bundeswehr’s place in society.”

“National security is not only a task of the state, but increasingly a joint task of the state, industry, the scientific community and society,” it states. It notes that German soldiers will need “not only a rational but also an emotional foundation for their demanding mission.”

In 1945, Franklin Roosevelt, Joseph Stalin and Winston Churchill declared, “It is our inflexible purpose to destroy German militarism ….” They warned of the repeated “resurgence of German militarism.” This was a problem that went back further than Nazism. Even before World War i, Germany was a highly militarized state. The army played a central role in society.

This was supposed to have been destroyed for all time. But now the German military will play a great role on the world scene and within German society itself. Most are convinced that enough time has gone by that there is no cause for alarm.

After World War ii, Germany was placed in a special category. Though America encouraged West Germany to rearm just a few years after the war, the nation’s legacy of igniting two world wars and ravaging entire nations demanded that certain limits be placed on it.

Those limits have now been cast off. Two years ago, German President Joachim Guack declared, “The postwar generations had reasons to be distrustful—of the German state and of German society. But the time for such categorical distrust is past.”

Germany’s defense paper also makes clear that Germany’s restraints should go. “Germany’s role in Europe and the world changed when Germany regained full national sovereignty,” it states. “It became clear that Germany now had the same rights, obligations and responsibilities as every other state in the international arena.”

A new Germany is now emerging—a Germany that is willing to lead, willing to deploy its forces around the world. A Germany that, for the first time since World War ii, is willing to be proud of its armed forces and to instill them with “an emotional foundation” for future battles.

This is uncharted territory for postwar Germany.

Many within Germany are opposed to the steps their leaders are taking, because of their nation’s history. That history shows that a militarily powerful, united Germany, sitting in the center of Europe, naturally dominates the Continent. Every time Germany has attained this position, it has shaken the world. A militarily powerful Germany will be world-changing. For more on why, read our free booklet Germany and the Holy Roman Empire.