Assassinations of police officers in Dallas and Baton Rouge mark a dangerous escalation of race hatred. America’s highest-ranking leaders are fueling the problem. 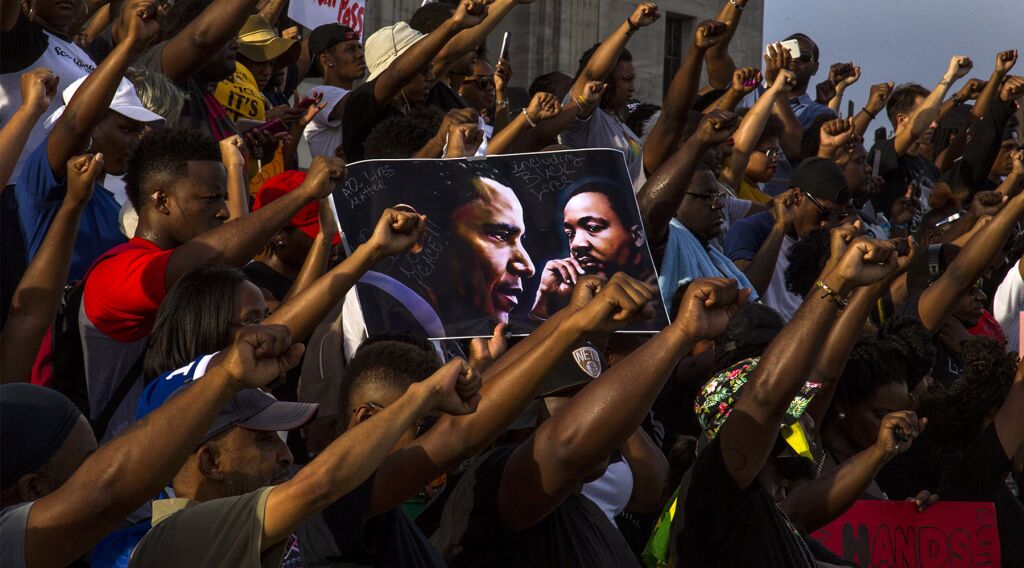 Assassinations of police officers in Dallas and Baton Rouge mark a dangerous escalation of race hatred. America’s highest-ranking leaders are fueling the problem.

In two separate instances this past July, one in Louisiana and the other in Minnesota, police fatally shot two black men. On the surface, these shootings look bad—as you can see in some of the videos that were made. If the officers involved are found to be guilty of racism or brutality, they should be punished to the full extent of the law. In America, no one is supposed to be convicted before receiving a fair trial.

President Barack Obama, however, weighed in on the issue before investigations even started. The incidents occurred while he was on a trip to Poland. Before he could even return home, he posted a message on Facebook saying that “all Americans should be deeply troubled by the fatal shootings of Alton Sterling in Baton Rouge, Louisiana, and Philando Castile in Falcon Heights, Minnesota.” He admitted that he didn’t yet know the particulars in either case, but then went on anyway to accuse the police of unfairly targeting black Americans because of their skin color.

“[R]egardless of the outcome of such investigations, what’s clear is that these fatal shootings are not isolated incidents,” he said. “They are symptomatic of the broader challenges within our criminal justice system, the racial disparities that appear across the system year after year, and the resulting lack of trust that exists between law enforcement and too many of the communities they serve.” Without any facts to support his statements, he used these incidents to preemptively accuse America’s police departments of systemic racism.

What causes someone to prejudge like that? It’s not the president’s job to judge from Poland what is happening here, and then casually hurl accusations of racism at America’s police.

President Obama has made a habit of weighing in on cases like this in the past—stating in absolute terms what is “really” happening before he has any evidence to back up his accusations. In 2014, for example, before the investigation into Michael Brown’s death was complete, he accused the policeman of racism. The U.S. Department of Justice led by Eric Holder (a black man) later found no evidence of wrongdoing by the officer. The president was wrong, but he has never apologized for his remarks.

Such rhetoric is inciting evils that are quickly becoming far worse than those it purports to solve!

Only hours after President Obama issued his statement on racial disparity in the criminal justice system, a black supremacist shot 12 police officers in Dallas, Texas. This horrific shooting took place during a Black Lives Matter protest. Five of the 12 officers shot died protecting the very people who were protesting against them. During a standoff with police before he was killed, the gunman, Micah Johnson, told a hostage negotiator he was upset over police shootings against blacks and “wanted to kill white people—especially white officers,” according to the Dallas police chief.

A week later, another black supremacist, Gavin Long, shot and killed three police officers in Baton Rouge, Louisiana. This shooter was associated with several anti-American groups, including Louis Farrakhan’s Nation of Islam. In a YouTube video posted before the attack, the shooter urged blacks to fight back against perceived law enforcement injustices. In his video rant, Long expressed outrage at the shooting of Alton Sterling and defended the Dallas shooter as a black man fighting for justice.

Now, both Johnson and Long were violent, mentally deranged individuals who killed innocent police officers who had nothing to do with Sterling’s death. But how did they come to the conclusion that America’s police officers are systematically killing off black men because of their skin color? No facts support this claim. It is an accusation being hurled by racist extremists with no proof.

Surely the statements the president has made—like his accusatory speech about those two policemen—help to stir up men like the Dallas sniper! Words have consequences! And they have many times the consequences when they come from the president of the United States! To call somebody a racist is one of the ugliest accusations you can make in America today, and we should really be careful. To falsely accuse people of racism routinely is a serious problem!

President Obama has been distorting facts and making many false accusations against America’s police in an effort to convince people that America’s local law enforcement officers need to be brought under federal control.

This is a slippery slope that is moving America toward a race war and rule by dictatorship or tyranny!

How do President Obama’s words and deeds influence African-Americans who lean toward the New Black Panther Party and other black supremacist groups? What are their effects on racist whites who lean toward groups like the Ku Klux Klan? Racial hatred is building fast.

Radio talk show host Laura Ingraham believes the New Black Panthers and Black Lives Matter want a race war. I think she is right. If so, no amount of negotiating with or appeasing these groups will succeed!

The Whole Head Is Sick

The Trumpet doesn’t take sides. We teach God’s truth—His prophecies. For 70 years, our work has been warning that an explosion of racial violence would engulf America and Britain if the people of these nations forsook God’s law, the only law that teaches human beings how to have peace and joy in their lives!

The Prophet Isaiah tells us about the terrible times just before Christ returns in the “last days” (Isaiah 2:2). His book was written specifically for this end time (Isaiah 30:1-9). “Ah sinful nation, a people laden with iniquity, a seed of evildoers, children that are corrupters: they have forsaken the Lord, they have provoked the Holy One of Israel unto anger, they are gone away backward. Why should ye be stricken any more? ye will revolt more and more: the whole head is sick, and the whole heart faint” (Isaiah 1:4-5). This is talking mainly about the United States, Britain and the Jewish nation in the Middle East. (If you don’t understand who the nations of Israel are, request our book The United States and Britain in Prophecy. All of our literature is free.)

“The whole head is sick.” God is saying the power structure (primarily white) that leads these nations of Israel is sick! And the “whole heart faint.” Neither the leaders nor their followers have the will or the strength to get to the roots of race riots and solve them once and for all (see Daniel 12:9; 9:13; and Leviticus 26:19). Their “heart” is so weak and unhealthy that the governmental system is about to “faint,” or collapse!

“From the sole of the foot even unto the head there is no soundness in it; but wounds, and bruises, and putrifying sores: they have not been closed, neither bound up, neither mollified with ointment. Your country is desolate, your cities are burned with fire: your land, strangers devour it in your presence, and it is desolate, as overthrown by strangers” (Isaiah 1:6-7). “Your cities are burned”! And who burns them? “Strangers [non-Israelites] devour it in your presence”!

This is a terrifying passage! Because these nations of Israel—mainly America and Britain—are laden with sin, and because of the weakness of our leaders, we will experience desolation and burning—all at the hands of “strangers.” In other words, race-related violence is going to get much worse.

Those individuals who respond and heed God’s warning, He will protect. God doesn’t want people to suffer through the calamities that are coming. And we must all see that these burning cities are prophesied to occur in the very last days of America’s existence as a strong world power—which is actually right before the Messiah comes to this Earth to rule it! Yes, America’s burning cities presage the Second Coming of Jesus Christ to this Earth! When He returns, He will end all racism and injustice permanently!