After a string of horrifying terrorist attacks in France and Germany, Europe’s fundamental choice is unthinkable—and inescapable. 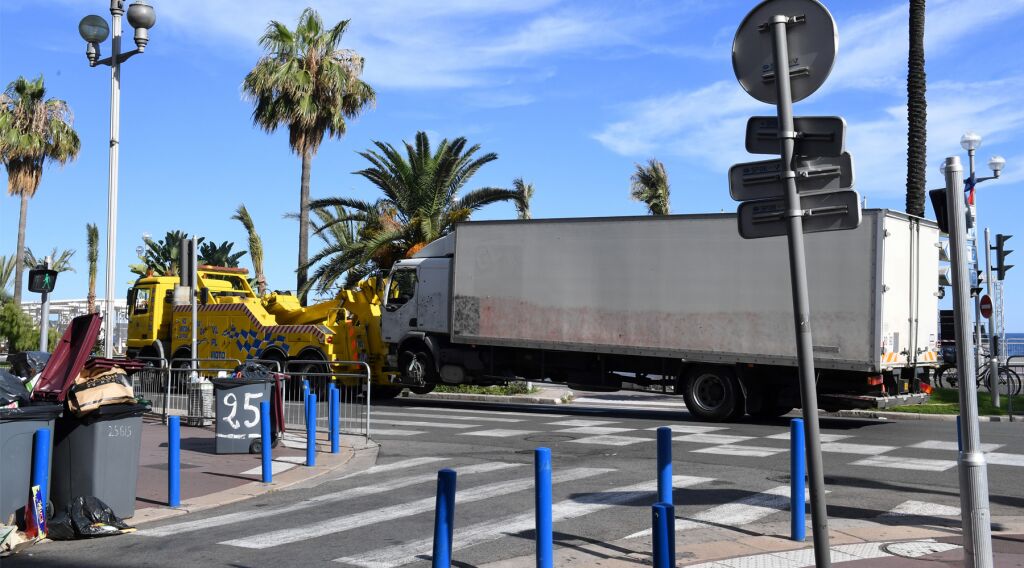 After a string of horrifying terrorist attacks in France and Germany, Europe’s fundamental choice is unthinkable—and inescapable.

It should have been an idyllic evening. Throngs of families had just celebrated France’s national day on the beach in the beautiful French Riviera. Instead, a terrorist sped a 21-ton delivery truck through the crowd for more than a mile.

Inside, Mohammed Lahouaiej-Bouhlel weaved back and forth to run over as many men, women, children, seniors and babies as possible, knocking them down “like bowling pins,” witnesses said. When police finally brought the Renault Midlum and its driver to a stop in a fatal storm of bullets, hundreds of wounded, dead or dying lay in its wake. Abandoned purses, baby buggies and stuffed animals were strewn in their midst.

It also left behind a heart-wrenching question: If they’ll use a truck to plow over families, how can we ever stop them?

This is the question facing every nation in Europe. In the weeks after Nice, Germany faced attacks with an ax, a meat cleaver and a bomb made from gasoline.

The weapons vary wildly, but the message is clear: Radical Muslims within Europe will use anything with a sharp edge, anything that can be made to explode, or anything that travels at a high speed, to kill.

France had suffered two other major terrorist attacks in the past 18 months. The nation had been on high alert since November. A state of emergency had been declared, giving police extraordinary powers, including the right to search homes without a warrant. About 10,000 soldiers helped police patrol the streets.

None of that stopped a terrorist with a truck.

The attack took authorities by surprise. Earlier that very day, French President François Hollande had announced that the nation would lift the state of emergency by the end of the month. Now France is extending it yet again.

But will that stop another Bouhlel with a rented vehicle? Clearly it is impossible for police or even soldiers to patrol every truck or every crowd. France has just about exhausted its non-radical options.

Immediately after the attack, Hollande announced that France is calling up its “operational reserves,” those who have previously served in the military or as active duty police. But an extra few thousand reserves on active duty would not have prevented this. The terrorist was not on any watch list and therefore not under suspicion. He had the right to rent a truck.

The French are at a loss. Their society is open. Their ideals are liberal. Their population is between 5 and 10 percent Muslim. Their influx of immigration is ongoing.

On July 14, Geopolitical Futures warned, “Multiple attacks like the Nice attack can terrify a population over time. It is not an irrational fear. The whole point of terrorism is to take the population to the point where fear is the only rational response. When that happens, there are political consequences. First, governments that have spoken of prior tragedies but have not prevented further attacks become delegitimized. Second, there is no moderate response that could work—only extreme ones like mass deportations or worse. Given enough terror, unthinkable results can be generated.

“This is precisely what IS [the Islamic State] wants to achieve. It wants a response so overwhelming it will unite Muslims everywhere. The strength of [the Islamic State’s] strategy is that it leaves the defenders an impossible decision. No moderate defense is possible.

“This is the kind of fear the Islamic State wants to generate. The brutal fact is that IS has not hit the tripwire on extreme fear yet, which means the likelihood of more frequent attacks is high.”

How can we stop terrorism? the French are urgently asking. French Prime Minister Manuel Valls offered this: “Times have changed, and we should learn to live with terrorism” (emphasis added).

But France cannot simply just put up with this. No nation will just accept that families and young children will be mowed down every few months.

Something has snapped in France. After the attack on the offices of Charlie Hebdo in January 2015, and again after the November attacks in Paris, the majority of the French approved of President Hollande’s reaction and his responses to terrorist threats. But in the aftermath of Nice, two thirds said they did not trust the government to fight terrorism. Prime Minister Valls was booed at a minute’s silence in Nice. Some shouted at him to resign.

Voters “want someone they feel is in charge at the top,” said Jérôme Fourquet from the polling agency ifop. “In those moments they want a commander-in-chief.” The French do not see Hollande as that commander.

“We are getting more and more racist, but unfortunately we need to,” said one Nice resident.

The head of France’s General Directorate of Internal Security told a closed-door session of a parliamentary committee on May 10 that the pressures on French society are so great that “we are on the verge of a civil war.”

He warned, “If there are one or two more attacks,” a major confrontation will occur between France’s “ultra-right” and Islam. This is coming from the French equivalent of America’s director of the fbi or the head of Britain’s MI5.

The amount of blood spilled on France’s streets means it has no choice but to resort to a more forceful response.

Armed guards and security scanners are not enough. They would not have stopped the Nice attack, and they have not stopped terrorist attacks in Israel, the Western democracy that lives with terrorism more than any other. There, the nation had to physically wall off the majority of Muslims and set up secure checkpoints before there was a substantial reduction in attacks. It appears that if France is serious about ending Islamist mass murder in its streets, it must take similarly drastic action.

Many French leaders have made statements about terrorists waging war against their country. But in reality, the French have not been on a war footing, not seriously enough to affect the everyday lives of ordinary people.

France has reached the end of the road. Its options are now clear. “Learn to live with terrorism”—or choose a different kind of “new normal”: Move on to a real war footing.

This means expansion into a security state. It means armed guards and bag searches as part of normal life.

Even now, amid an immigration crisis spiked with horrifying outbursts of terrorism, giving up free ideals for safety remains anathema to modern Europe. But what other choice does it have? Marseilles, Brussels and Barcelona are all about one third Muslim. Malmö, Amsterdam, Stockholm and Rotterdam are about a quarter Muslim. Muslims heavily populate big cities across Europe. Literally walling off these populations would be difficult; it would prove much harsher to local Muslims than Israel’s West Bank barrier, and it would literally run massive divides through the land of liberté, egalité and fraternité.

As the Bastille Day attack shows, French authorities have no way to target just the Muslims who will kill. France cannot escape this choice: “Learn to live with terrorism”—or take radical action against all Muslims. Biblical prophecy shows that sometime soon, Europe will take the latter option. To learn more, read the next article, “Is Europe Finally Ready for an Army?”

From The September 2016 Philadelphia Trumpet
View Issue FREE Subscription
Next