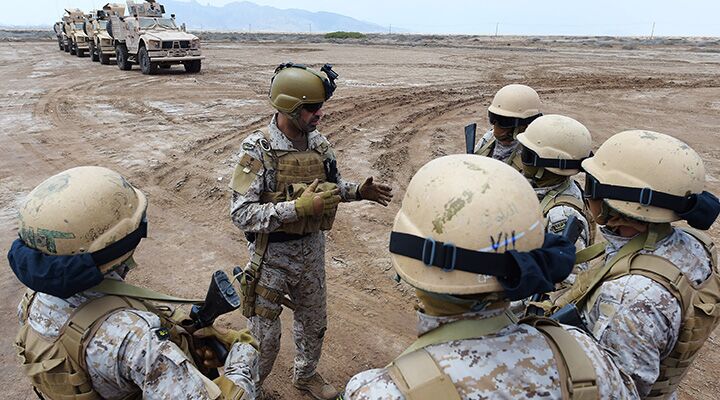 Unprecedented in the Middle East

The “largest and most important” military drills in the history of the Middle East have just been launched, according to an announcement by the Saudi Press Agency.

The agency said that the drills, dubbed “North Thunder,” signal “a clear message that the Kingdom of Saudi Arabia and its brothers and friends of the participating countries stand united to confront all challenges and maintain peace and stability in the region.”

The announcement of the exercises comes two months after Saudi Arabia formed its 34-nation counterterrorism coalition of Arab nations. The coalition was largely ridiculed then, but, at the very least, it was significant in that it represented the extent of Saudi Arabia’s concerns over the current Iran-dominated, American-approved geopolitical landscape in the Middle East. The hasty coalition announced in December also represented a beginning point of sorts for expedient military unions in the future.

Monday’s announcement of “North Thunder” also comes six days after Saudi military spokesman Brig. Gen. Ahmed al-Asiri announced Saudi Arabia’s intentions to commit ground troops to Syria—ostensibly for the sole purpose of fighting the Islamic State. The defense official talked about coordinating with Arab allies, using Saudi Arabia’s military operation against Iranian-sponsored rebels in Yemen as a model. He said, “We have models based on real experience of being in the Arab coalition in Yemen where operations are running excellently and positively.”

It seems clear that in Syria, Saudi Arabia is targeting the Islamic State and the Iranian-allied Syrian regime of Bashar Assad. Saudi Foreign Minister Adel al-Jubeir told cnn: “Bashar al-Assad will leave—have no doubt about it. He will either leave by a political process or he will be removed by force.” Jubeir was speaking in Munich, Germany, at the conclusion of the International Syria Support Group peace talks on Friday. “I believe Bashar al-Assad is weak and I believe Bashar al-Assad is finished,” he said.

For more information about the future of Saudi Arabia’s Middle Eastern alliances, Syria, Assad and his allies, read Trumpet editor in chief Gerald Flurry’s article “How the Syrian Crisis Will End” and his booklet The King of the South.