In America’s absence, the House of Saud is scrambling to form alliances to stop the king of the Middle East.

By Brent Nagtegaal and Callum Wood 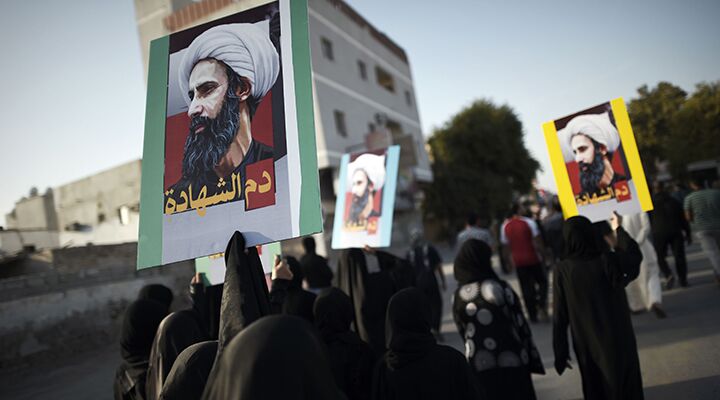 In America’s absence, the House of Saud is scrambling to form alliances to stop the king of the Middle East.

By Brent Nagtegaal and Callum Wood

Just two days into 2016, the Middle East careened toward a major Sunni-Shiite war. Saudi Arabia executed a prominent Shiite cleric, and Iran immediately unleashed a major backlash. Protesters in Tehran ransacked and torched the Saudi Embassy, while police did little to intervene. In response, Saudi Arabia led a barrage of Sunni states that severed diplomatic ties with Iran.

Hot collars and frosty relationships are nothing new in this age-old religious rivalry, but the speed with which this latest incident accelerated into a major clash was shocking. Saudi Arabia and Iran are now openly going head to head.

This is the new reality in the post-American Middle East: Iran is king, and Saudi Arabia needs to scramble for any alliance it can cobble together—and fast.

Shiite cleric Nimr al-Nimr was an outspoken critic of the Saudi government. After spending more than three years in prison, Nimr was executed on January 2 on charges of inciting sectarian violence and sedition along with a range of other offenses.

Nimr was based out of eastern Saudi Arabia, where most of the nation’s Shiites reside. He had campaigned for a greater Shiite representation in the nation, and even said that the Shiite province of Qatif should secede if his demands were not met.

Nimr was neither saint nor moderate by any standard, but neither were his captors. The Saudi regime is incredibly oppressive. Nimr died along with more than 40 other convicts. Saudi Arabia executed 158 “terrorists” in 2015. Free speech is a luxury in this nation, where minorities and women suffer under a complex range of civil and religious laws.

The Saudi government sent a clear message with the execution: It will not tolerate dissent from the Shiite populace, nor will it allow Iran to establish a foothold in its own sovereign territory. In a region where Iranian-Saudi proxy wars are commonplace (map, page 25), the Sunni government is looking to shore up its deterrent ability as prospects of a more direct conflict with Shia Islam—predominantly Iran—looms large.

None of these Saudi actions would have been necessary, however, had the United States not walked out on its ally.

Since the start of Barack Obama’s presidency, the U.S. has sought to withdraw from policing the Middle East and to find an exit strategy.

Key to American withdrawal was the ending of hostilities with Iran, as evidenced by Washington’s willingness to proceed with a comprehensive nuclear deal despite several belligerent actions by the Iranians.

Early in the negotiations between Iran and the U.S., even before the rest of the world was aware they were taking place, America was the desperate party. Yes, Iran was suffering under crippling international financial sanctions, but it was actually the U.S. that proved hungry for a deal.

Iran surely couldn’t believe its luck. Before the talk of a nuclear deal, the U.S. countered Iran’s moves for hegemony in the region. Not anymore. During the negotiations, every time the U.S. got upset, Iran simply threatened to walk away from the table. As a result, it received a virtual free pass to export its destabilizing force in the Middle East. And in every theater, the interests that were being sacrificed in order to please Iran were those of Saudi Arabia.

Looking at Iran’s regional gains since the nuclear deal negotiations began, it’s no wonder the Saudis are upset.

In Iraq, Iran strengthened its hold by activating different Shiite militias in the fight against the Islamic State. After a series of embarrassing defeats, the Iraqi Army was proving largely ineffective against the Sunni jihadists, losing key cities such as Ramadi and Mosul. Iran was happy to give its help. Its Shiite fighters provided most of the ground forces needed to successfully hold back the Islamic State from getting closer to Baghdad, while the U.S. provided air cover.

Though the U.S. claimed there was no collusion between the two militaries, Iran and America were on the same side. In the meantime, Iranian Revolutionary Guards leader Qassem Suleimani was seen often on the Iraqi battlefield, where he quickly claimed legendary status. Despite Iraqi Prime Minister Haider al-Abadi’s efforts, 2015 saw his country become a vassal of this neo-Persian empire.

In Syria, Iranian troops led ground forces to help bolster the regime’s beleaguered leader, Bashar Assad. Since the early 2000s, Syria has been a proxy of the Iranian government, providing a valuable transit point between the Shiite powerhouse and Lebanon on the Mediterranean coast. When the Arab Spring of 2011 looked to topple Assad’s government, Iran covertly sent military advisers to help the Syrian Army. Instead of stepping down, the Assad regime put down the rebellion using barbarity rivaling that of the Islamic State. When some of the army defected, Saudi Arabia was quick to start supporting the rebels with funds and weapons.

Through the ongoing civil war, the Saudis have continued to arm the opposition, even as Iran increased its involvement. In late 2012 and into 2013, Iran activated its Lebanese proxy Hezbollah to join the fight. Finally in 2015, the gloves came off and Iranian troops were seen fighting inside Syria. All the while, the U.S. maintained its call for Syria’s president to step down from power, but did nothing. This only pushed the Saudis further away from the U.S. and in search of other friends.

At one time, the Saudis could outsource much of their protection to the U.S.. This arrangement provided a level of stability in the region. But during the nuclear negotiations, it became clear that the status quo had changed. America would no longer play a robust role in policing the Middle East. Saudi Arabia saw this as a stinging betrayal precisely at the time that American deterrence was needed most.

Recognizing this new reality, Saudi Arabia began to find its own way, without even informing its long-time ally. This was particularly noticeable in Yemen.

In the latter part of 2014, Saudi Arabia increased its calls for action against the Houthis, the Iranian-backed Shiite group in northern Yemen bordering Saudi Arabia’s south. The Iranians had activated this proxy to foment a revolution against the Saudi- and American-friendly Yemeni government. When the Houthis took over the capital of Sanaa in January 2015, the Iranians boldly claimed that they now had control over four capitals in the Middle East (the other three being Tehran, Damascus and Beirut). It was clear to many that Iran was trying to control the southern gateway of the Red Sea, the Bab-el-Mandeb Strait, which would essentially put international shipping, and shipping to Saudi Arabia’s west coast, at the mercy of Iran.

This offensive action by the Iranians became a game changer for the Saudis. In early 2015, Saudi Arabia declared that it had assembled close to a dozen nations, including the Gulf states and Egypt, to go to war against the Houthis. Stunningly, the Saudis did not ask for the U.S.’s participation, nor did they inform America about the announcement in advance. This was the clearest sign yet that the relationship between the U.S. and Saudi Arabia is finished.

This change was underscored later in the year when Saudi Arabia announced the formation of a hastily assembled coalition of 34 Islamic nations to counter international terrorism. Again, the U.S. was not informed of this alliance before it was announced.

The fact that no Shiite powers are part of the alliance indicates that its objective is more than just countering the Islamic State. The sectarian nature of this coalition is a clear reaction to the growing power of Iran.

Where the Rift Is Leading

Often in history, it only takes a seemingly small event to trigger a chain reaction leading to a much greater conflagration. In World War i it was the assassination of Archduke Franz Ferdinand. But these trigger events are usually tipping points that come after a series of events leading up to them. Before assassin Gavrilo Princip pulled the trigger, a number of alliances were forming throughout Europe, dividing the Continent.

While it’s unlikely that Nimr al-Nimr’s execution will ignite a full regional war, his death has certainly further delineated the two camps in the Middle East. By conducting it, Saudi Arabia not only sent a message to Iran, but it also forced other Arab nations to clarify whose side they are on.

On one side are countries and organizations that back Iran and its push for hegemony. On the other, a counter alliance is forming that seeks to check Iranian expansionism in the vacuum created by America’s withdrawal. Since no one else was stepping in, Saudi Arabia has taken charge.

However, Bible prophecy does indicate that leadership of this alliance will not be left in Saudi Arabia’s hands. Instead, a growing power from outside the Middle East will take the reins and use the alliance to fulfill its own goals. Psalm 83 indicates that a German-led Europe will ally itself with Saudi Arabia and many of the nations now part of its coalition. In the coming year, look for Saudi Arabia to be pushed further into a corner as Iran’s march over the Middle East continues.