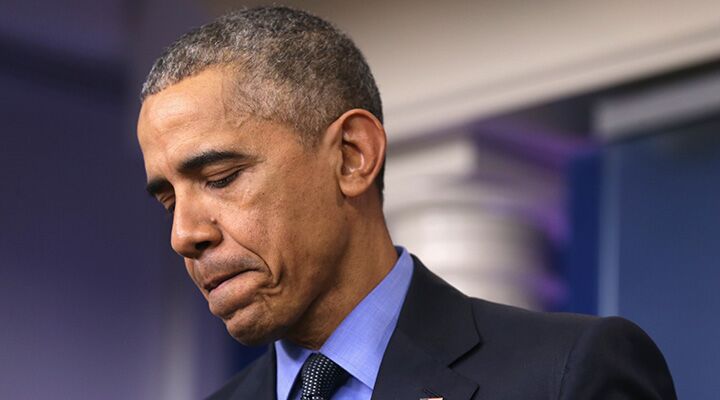 Two years on from the infamous “red lines” incident, America once again goes back on its word.

“Assad’s days are numbered.” “Assad needs to go.” “I’m confident Assad will go.” These are all crystal clear statements from United States President Barack Obama. Over the past five years, he and his administration have made these statements repeatedly.

“The United States and our partners are not seeking so-called regime change.”

That is an equally clear and completely contradictory statement from U.S. Secretary of State John Kerry, made just last week. America just completely reversed its position over Syrian President Bashar Assad. Why? In order to appease Russia.

“The U.S. stands ready to work with Russia,” Kerry told reporters in Moscow on December 15, adding that the world is better off when “the United States and Russia pull together in the same direction.” In other words, the United States will let Russia have its way. The Associated Press reported the flip-flop as, “Assad can stay, for now: Kerry accepts Russian stance.”

In a press conference last month, President Obama stressed the urgency of defeating the Islamic State, adding that “we’re not going to be able to fully succeed in eliminating their safe havens until we have a political settlement of some sort in Syria.” Less than a month ago the president stuck to his commitment that Assad must go! Now his secretary of state has essentially said, I guess Assad can go ahead and stay for a while.

The Syria situation is proving to the world once again that the American president cannot stick to his word.

“Today I want to make it absolutely clear to Assad and those under his command, the world is watching,” Obama famously said back in 2012. “The use of chemical weapons is and would be totally unacceptable, and if you make the tragic mistake of using these weapons, there will be consequences, and you will be held accountable.”

Assad has crossed that red line again and again. America has responded by hedging. Nothing happened. America was reduced to threatening an “unbelievably small, limited” military intervention (Kerry’s own words). More than two years later, Assad is still in power, and Obama and Kerry are happy to let him remain there. He has faced no consequences. Those “red lines” became the most talked about symbol of American weakness—of many such symbols—in recent years.

It was this weakness that gave Russia an opening in the Middle East in the first place. After America started wavering and hedging over the red lines, Russia swooped in with a sham agreement on removing Assad’s chemical weapons, and America came out looking foolish.

And Assad is still using chemical weapons! Earlier this year the Organization for the Prohibition of Chemical Weapons (opcw) reported several incidents between March and May of 2015 which “likely involved the use of one or more toxic chemicals.”

Rafael Foley, the U.S. representative to the opcw, said, “The sad reality is that chemical weapons use is becoming routine in the Syrian civil war.”

“Nearly everyone I talked to in the administration considered the ‘red line’ aftermath to be a diplomatic fiasco,” David Remnick wrote in the New Yorker. “The administration, which started out saying that [Assad] must step aside, is now willing to see Assad play a transitional role in a political settlement. … As one abashed U.S. official told me, ‘the meaning of “Assad has to go” has evolved.’”

Yet even as America hands leadership of Syria over to Russia, Mr. Obama maintains that the U.S. is still in charge.

When told that Russia was challenging America’s leadership on 60 Minutes in October, President Obama scoffed. But over and over again, Russia keeps getting its way.

But this is a problem that goes far beyond America’s leadership. When Obama backed down over his own Syria red lines, most of the country was relieved. At the time only 28 percent of American’s supported a strike against Assad. At the time, Trumpet Managing Editor Joel Hilliker wrote:

Nearly two in three now say that the U.S. should be extremely reluctant to use military power worldwide, a September 9 CNN/ORC International survey found. Only 34 percent say America should be ready and willing to wage military campaigns.The mood of the American public is clear. What American politician would go against that in order to commit the nation to any but the lightest intervention?

Most Americans could probably care less about Assad—the Islamic State is now seen as the more pressing threat. But a world in which America’s word is no longer reliable is a recipe for disaster.

When a red line is so easily erased and “Assad needs to go” evolves into “Assad can stay,” it means the United States has lost the pride in its power. And the rest of the world has taken note. Just look at Russia.