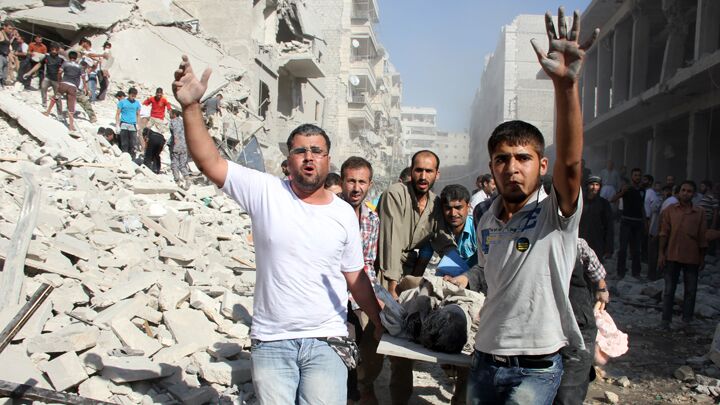 Obama’s ‘red line’ is forcing the U.S. to make a decision on Syria.

Syria has dominated the headlines this week, with a deluge of footage of people killed by a chemical weapons attack. With some estimates of a death toll in the hundreds, all eyes are on the United States to see if there will be a response.

On Aug. 20, 2012, President Obama warned that Syria’s Bashar Assad risked crossing a “red line” and provoking U.S. military action if he used chemical weapons: “We cannot have a situation where chemical or biological weapons are falling into the hands of the wrong people …. We have been very clear to the Assad regime—but also to other players on the ground—that a red line for us is, we start seeing a whole bunch of chemical weapons moving around or being utilized.”

Mr. Obama’s “red line” appears to have been crossed. America must now act or risk the broader consequences of inaction. Has Assad called President Obama’s bluff?

When he said this, President Obama must have believed that there wouldn’t be any chemical weapon usage. After all, Assad had and has, to this point, survived without the use of chemical weapons. On top of this, Washington is doing all it can to untangle itself from the Middle East. As Stratfor chairman and analyst George Friedman noted, “Syria was not an issue that affected the U.S. national interest until Obama declared a red line. It escalated in importance at that point not because Syria is critical to the United States, but because the credibility of its stated limits are of vital importance.”

All eyes are focused on the U.S. to see whether it will act, now that it appears Assad has boldly defied the “red line.” Nations such as North Korea and Iran face similar “red lines” with Washington. For both, the “red line” would be the construction of a nuclear warhead, or the use of it against another nation. If the U.S. doesn’t respond to Assad, it risks appearing weak to these nations in particular.

A lack of response would lead to a murky foreign policy, wherein the point that America would intervene militarily in a given situation would be unclear. This would leave the world unclear on U.S. intentions and response to scenarios where a “red line” is crossed. Not following through on promises would undermine America’s credibility, provoke more disrespect, and over time create more international problems. Nations such as Iran and North Korea will read U.S. inaction as a sign that they are able to utterly defy U.S. wishes without fear of a response from Washington.

What about Russia and China, which back Syria against the wishes of America? To not act would be a clear indication that the U.S lacks the will to impose its strength, telling the Russians and Chinese that they are winning the battle for Syria. To get away with a major chemical attack would be a huge victory for Assad, and any victory for Assad is a victory for his backers. No doubt the Russians and Chinese would rejoice at seeing the U.S. back down from its word, weakening its overall presence on the world scene.

A weak-looking U.S. would also be detrimental to the Gulf states, which have griped about U.S. reluctance to arm and back the rebels. As it stands, the Gulf states are showing no signs of doing more, but are looking to the U.S. to step up its involvement. There is already evidence that the Gulf states and surrounding nations have lost confidence in the United States. Despite their desire to see the Assad regime removed, the Gulf states haven’t rallied wholeheartedly behind the idea of the U.S. intervening. Jordan has gone as far as to refuse the U.S. using its territory as a launching ground for an assault.

While all the “moderate” Arab nations in the region would like to see the civil war end, they clearly have no confidence in the U.S.’s ability to do so. They are behaving this way because the U.S. is on the down and out in the Middle East. Waning influence and a declining military presence are proof of the U.S.’s diminishing role in the region. It makes little sense for the Arab nations to rally around a power that is determined to pivot out rather than solve the problems that lie within the Middle East.

If the U.S. does go in, it faces a series of immediate challenges.

For one, the U.S. will not have UN backing. The U.S. is going to the United Nations at the moment, but with nations such as Russia on the Security Council, any move to strike Syria will be vetoed. Thus the U.S. would have to go it alone. Secondly, the type of strike must be considered. If the U.S. wants to just knock out the chemical weapons, it needs very accurate intelligence on where the weapons are. With many chemical weapon storage facilities in covert facilities or hidden in populated areas, the fact is that civilians would likely be affected. If the U.S. wants to completely depose Assad, it will need more than missiles. It is much easier to destroy a weapons cache than it is to topple a dictator. The U.S. has made it abundantly clear that it doesn’t want to take on either of these options. The issue of sending troops would arise, but the U.S. does not want to be stuck in another war that it doesn’t want.

Back home in the U.S., there are few who would condone a war on Syria at the moment. Obama would take a real hit to his popularity, at home and abroad, if he were to attack Syria. To go in without public support or UN support would be dangerous for the president. As a result, the U.S. is in an utter dilemma over what to do next. Meanwhile, nations such as Russia and Iran laugh.

There was once a time when the world trembled at the military might of the United States, and rightly so; for behind that military power was a will to use it! Following the collapse of the Soviet Union, the U.S. had a unique opportunity as the world’s only superpower. There was a built-in responsibility, with all that power, to govern world affairs for the greater good. How the U.S. has squandered that opportunity! Where is the real power behind the U.S. today, and how was it lost?

The reality is that God has removed that power! Consider Leviticus 26:19: “And I will break the pride of your power; and I will make your heaven as iron, and your earth as brass.” Herbert W. Armstrong quoted this scripture in the book The United States and Britain in Prophecy. In that book, he summarized the U.S. response to crises around the world:

Today even little nations dare to insult, trample on, or burn the United States flag—and the United States, still having power, does no more than issue a weak protest! What’s happened to the pride of our power? We have already lost it! God said, “I will break the pride of your power!” And He did!

Why then is God removing all these blessings, and replacing them with curses? Punishment implies correction. While there are terrible times coming on the United States and the world as a whole, God is allowing it because He wants to turn us from sin, and look instead to His government, which brings an abundant joyous way of life.

Eventually, man will be brought to the point where he knows that he cannot possibly govern himself. At that time, when Christ sets up God’s government over the Earth, mankind will be taught the true way to live a happy, abundant life under the law of God. That era is drawing close, and if you want to know more about the role the United States will play in the days leading up to that time, be sure to read The United States and Britain in Prophecy.