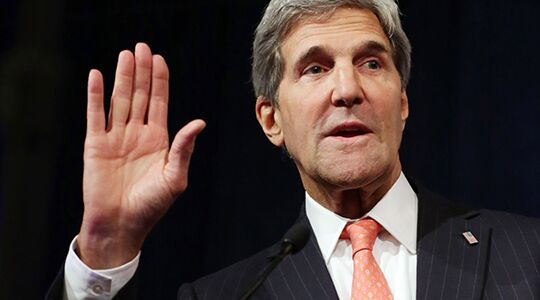 Recent events have made it unmistakably clear: The era of America bestriding the world has ended.

It didn’t last long. Particularly if we consider it as having started after the Cold War, when the Soviet Union collapsed in 1991.

But make no mistake: The period of the United States undertaking big, bold plans to effect political change in other nations, particularly plans that involve large deployments of soldiers, is passed.

And most Americans would say, Amen to that.

After 12 years of costly war in Iraq and Afghanistan—over 20 if you go back to the first Gulf War—Americans have had enough.

It was undeniable last month, when Secretary of State John Kerry tried to sell Americans on an intervention in Syria. The strike the administration was contemplating, he assured us, would be “very limited, very targeted, very short-term … unbelievably small” (emphasis added). That is all that Americans would have the stomach for. In fact, polling showed that they were opposed even to that: An Economist/YouGov poll found only 28 percent of Americans supported the U.S. participating in a coalition military strike on Assad’s regime.

Sure, the nation looked weak when, after threatening to use force against Bashar Assad, it then pulled back and turned the situation over to the Russians. But most Americans were relieved anyway.

Sure, Iraq is turning into a violent jungle in our absence. So far this year over 7,000 Iraqi civilians have been killed—mostly thanks to the resurgence of al Qaeda in Iraq. But most Americans are simply glad we’re not in the middle of it.

Sure, Afghanistan will likely revert to Taliban rule once we’ve withdrawn. But we have exhausted enough lives and treasure there. Long-term success is unattainable; they don’t want us there anyway; why not just leave them to themselves to sort things out?

It’s not difficult to understand the thinking. America has invested so much into these theaters over the past 12 years, and what do we have to show for it?

And the wreckage of America’s foreign policy lies scattered even further afield across the Middle East.

In Egypt, Washington’s push to dethrone Hosni Mubarak opened the door for the Iranian-aligned Muslim Brotherhood to take over. Now the military has reasserted its power and is trying to keep a lid on the post-Mubarak turmoil. Meanwhile, Egypt’s alliances with the U.S. and Israel lie in tatters.

In Libya, America’s intervention to oust Muammar Qadhafi ended with extremists in power and a lethal terrorist attack on America’s outpost in Benghazi. Libya is now ruined and lawless, aligned with Iran and violently hostile to America.

It all started with noble rhetoric about squashing extremism and nurturing the blossoms of democracy and peace. But Americans can’t name one place where that promise has inarguably materialized.

It seems the U.S. is Midas in reverse: Everything we touch turns to ash.

Now, Americans are tired of failure. The nation is $17 trillion in debt (officially—unfunded liabilities put the figure far higher). Why borrow money to fight foreign wars that end badly, or that never end? We have enough problems at home. What are we even doing over there, when it’s clear our presence is unwanted?

This is approximately the view of a great majority of Americans. Nearly two in three now say that the U.S. should be extremely reluctant to use military power worldwide, a September 9 cnn/orc International survey found. Only 34 percent say America should be ready and willing to wage military campaigns.

The mood of the American public is clear. What American politician would go against that in order to commit the nation to any but the lightest intervention?

Benjamin Netanyahu is pleading for help in depriving Iran of nuclear weapons. He shouldn’t expect it from America. The snubs from the Obama administration aside, Americans simply don’t want to get involved. Last year, seven in 10 Americans opposed U.S. military intervention in Iran—and that was before they swooned over Iran’s “moderate” new president.

This war weariness has accelerated and reinforced America’s growing tendency to just ignore the rest of the world and fix its attention on itself. Do you see this trend reversing? Americans just want the world and its problems to go away.

Look south toward Latin America, and you see problems that should be hard to ignore. As Victor Davis Hanson wrote, “Brazil and Argentina often sound as anti-American as our worst enemies—and in the Age of Obama, no less. If Mexico were in the Middle East, its level of violence would earn calls for U.S. humanitarian intervention in the manner of Libya and Syria.”

But who would ever want to do anything about it? Most Americans just look the other way. The U.S. is no more going to insert itself into that theater than it is going to establish a colony at the bottom of the Pacific Ocean.

The Obama administration has said it is pivoting to Asia. At the same time, its signals reveal its desire to gracefully exit. Russia has suddenly become its new go-to peace broker. And does anyone really expect it to directly confront China, to whom it is $1.3 trillion in debt? The best strategy it has devised is to encourage Japan to militarize so it can deal with Beijing.

Washington is taking a similar approach to instability in Europe: stepping back and hoping that an economically and militarily dominant Germany will be able to hold down the fort.

Here is a truth of which you can be absolutely certain: The number of crises in the world is going to increase.

The Middle East is becoming less stable. Iran’s power is growing. Weapons of mass destruction are proliferating and will end up in the hands of more and more tyrants and terrorists. Islamism will spread in northern Africa. Volatility in Europe will rise alongside Germany’s power. Contention over resources will fuel increasing tension among European and Asian nations. Arms races in multiple regions are mushrooming.

The calls for action, for intervention, are bound to escalate.

But America will not be one to step up.

In Americans’ view, we have done our part. We are weary of intervention. We’re broke. We’re weary of fighting. We’re sick of not seeing the benefits from all the effort and expenditure. “[T]he more humanitarian crises develop, the less we are convinced that we could make things better by intervening,” Hanson wrote, “or, even if we could, that those whom we thought we were helping would actually believe that we did.”

Above all, Americans are tired of losing.

People can criticize the Obama administration for its weak foreign policy. They can point out how America’s standing in the world has plummeted during his presidency; how he surrendered Iraq and is surrendering Afghanistan; how he did nothing about Benghazi, and crumpled over Syria.

The truth is, though, that he is acting in approximate accordance with the increasingly isolationist view of more and more Americans. He is giving the American people essentially what most of them are asking for.

In 2 Thessalonians 2 it speaks of a “great falling away” in the Church of God—and it says the falling away came first, and then the man of sin was revealed. He couldn’t have thrived if the people hadn’t fallen away first. This, in principle, has happened to the United States.

The era of America bestriding the world has ended. Many Americans are relieved.

But beware the era that comes next.