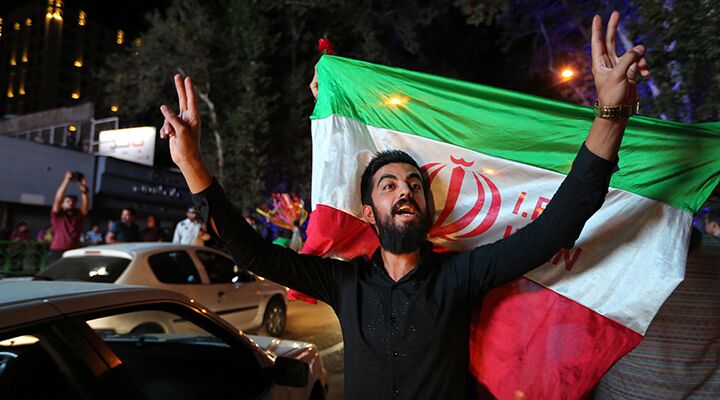 Iran just made a deal to moderate its nuclear activity for sanctions relief. This is a decisive moment, setting the course in the time ahead for the Middle East and beyond.

Yesterday it was announced that the P5+1 nations reached a deal with Iran regarding its nuclear program. If enacted, the deal will lift economic sanctions against Iran in exchange for concessions in its pursuit of nuclear technology.

Many observers are describing this deal as historic. That is absolutely right—but most people fail to understand why. A full appreciation for its significance requires viewing events from the unique perspective of how it fulfills biblical prophecy.

In a number of ways, this deal will accelerate events in the Middle East and far beyond that align exactly with what the Trumpet has been anticipating would happen based on the prophecies of the Bible.

This deal sets the course for what happens in the Middle East for years to come. We are certain to look back on it as a decisive moment in world events.

The most important effect is that it cements Iran’s position as king of the Middle East. This is a prophetically significant role that the Trumpet has believed for over two decades that Iran would fulfill. Probably nothing has highlighted the truth of this analysis more than what just happened. You can read the proof behind this conclusion in our booklet The King of the South.

After the deal was announced, Iranian President Hassan Rouhani said, “Negotiators have reached a good agreement, and I announce to our people that our prayers have come true.” He seems quite pleased. There are many potential reasons why.

Most broadly, this deal puts Iran on a path to have crushing sanctions lifted and to take its place in the global economy—even while it maintains its nuclear program.

This agreement stipulates that Iran can continue to develop and improve advanced centrifuge machines that can be used to fuel reactors or bombs. Advanced centrifuges are unnecessary for peaceful nuclear power generation, which Iran has repeatedly insisted is the only purpose for its nuclear program. Such centrifuges are only essential if Iran wants to “sprint for a nuclear bomb.”

This agreement does not even address Iran’s intercontinental ballistic missile program, another project that is useful only for the delivery of weapons of mass destruction.

Under this deal, for a limited time, Iran is not allowed to enrich uranium. Those restrictions gradually go away after a prescribed number of years, as few as eight and as many as 15. This aspect of the deal belies the fundamental gamble underpinning the agreement: Essentially, the United States and these other nations hope that by that future time, the Iranian regime will have become so enmeshed in the global community, and that the overwhelmingly youthful Iranian population will have grown to possess such a strong moderating influence, that all will be well.

Put another way, at the foundation of this deal lies the notion that, in the end, Iran can be trusted.

When he announced the agreement, President Barack Obama said, “This deal is not built on trust, it is built on verification.” It is unclear exactly what makes him so confident in outside nations’ verification ability, considering how much Iran has repeatedly deceived nuclear inspectors. But that reality aside, there is no denying the fact that it is, in fact, ultimately based on trust. The whole arrangement is built on faith that over time, given proper engagement by and collaboration with other nations, Iran will blossom into a stabilizing force within the Middle East. As an American diplomat involved in the negotiations recently said: “Obama wants this [deal] as the centerpiece of his legacy, and he believes a peaceful Iran could be a bulwark against isis in the Middle East and the key to peace there.”

The trouble is, this casts aside the mountains of proof that Iran is not peaceful—that it is actually the most destabilizing force in the Middle East. And just as much to the injury of the Iranian people, the current Iranian regime has been generously funneling resources to supporting terrorism even while its economy languishes under sanctions.

Now, however, with this agreement in place, the money is going to start to flow into Iran again.

Soon, we will able to witness the results.

This agreement says sanctions would “snap back” if Iran violates its terms. This is almost certainly impractical and thus untrue. As many analysts have noted, it took enormous effort to convince the world to agree to the sanctions to begin with. It is ludicrous to think that Russia and China, for example—which have been so resistant to punitive measures against Iran and so eager to find ways around them—will reimpose them once they have been removed.

Once Iran’s seized assets are released and the sanctions start to come off, once oil money again starts flowing into Iran, watch what happens. Not even economic hardship was able to dissuade the regime from its radical goals. With even the threat of economic punishment withdrawn, it is certain to act with even greater assertiveness and pushiness.

So what will Iran do? What sort of behavior will we see within the coming 6 to 12 months?

Considering how emphatically this underscores Iran’s dominance of the region, it seems inevitable that all its nefarious activity over the last 2½ decades to pursue that dominance is going to start ramping up.

What will happen in Afghanistan? What will happen in Iraq? In both of these theaters Iran has invested substantial resources to foment trouble, to create problems for the West, and to spread its influence. Iraq in particular is squarely in Iran’s sights for something of a long-term conquest—as the Trumpet has diligently tracked, and as is revealed in biblical prophecy. In the wake of this deal, we are certain to see an increase in Iran’s efforts to lock down its investment there.

What will happen with Saudi Arabia and other Arab states? These nations, fearful of an ascendant Iran, have been stridently opposed to this nuclear agreement—precisely because it is so clearly favorable to Iran. They insist that whatever concessions Iran receives for its nuclear program, they are entitled to receive as well. Even the negotiation process appeared to be setting off an arms race throughout the Middle East. This too is an extremely dangerous consequence to watch for.

More specifically from a prophetic standpoint, the strengthening of Iran’s position is catalyzing an alliance among these Arab nations. This is prophesied in the Bible, and it is increasingly taking shape as an anti-Iran alliance. Now that Iran’s power grows even stronger with this agreement, we can expect this trend to accelerate.

Another critical nation to watch is Germany. The Trumpet has forecast and tracked Berlin’s response to Iran’s rise, and how, because of the U.S.’s policy of appeasement and its broken will, Germany is preparing itself for what it views as an inevitable confrontation with Iran. What will happen with Germany? Watch for it. Pay special attention for it to become even more involved with those anti-Iranian Arab nations, which is also prophesied.

What’s going to happen with the Islamic State? This Islamist group’s barbaric antics have demanded a lot of attention and aroused a lot of fear lately. By comparison, Tehran has emerged looking quite moderate and reasonable. It has even found itself on the same side as the U.S. and the West in fighting the Islamic State. From Iran’s perspective, this has served as a useful distraction during nuclear talks. But now that a deal has been struck, and particularly once Iran is flush with cash and far freer to do as it pleases, we could well see it rise up against the Islamic State and deal with it powerfully and decisively, putting to rest any confusion about who rules the region.

What will happen with Israel? It has emerged as practically the only nation unreservedly critical of this agreement. This whole process of negotiations has progressively left Israel more vulnerable and isolated than it has ever been. This deal exacerbates both its isolation and its vulnerability. This too is deeply significant from a prophetic perspective.

Perhaps the most fearsome question of all is, what will happen when Iran gets a nuclear weapon?

This deal was supposed to prevent this. In reality, it guarantees it—it is simply a matter of time. The Trumpet has warned for years about how the Bible’s description of the sequence of end-time events reveals it will be a radical Middle East power that triggers World War iii. It also reveals emphatically that this war will be a nuclear war.

President Obama and many other people are making glowing statements about how important this deal is and how it will ensure peace.

The thing about those statements is, time will soon tell.

It doesn’t matter what the politicians and pundits say: History is going to play out—and soon it will be clear to people around the globe what just happened.

This truly was a historic deal. It is setting the course for the Mideast from this point forward—and for nations far beyond that region. Soon the whole world will recognize just what a decisive moment in human history this agreement really was.

Listen to Joel Hilliker discuss this issue in Trumpet Hour.