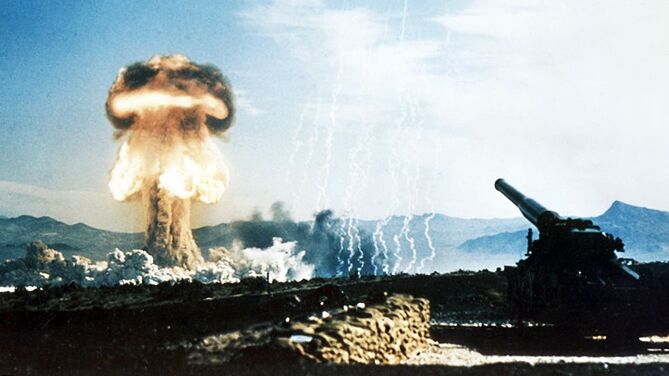 The Bible speaks of a threat that would leave cities without inhabitant—a nuclear threat that will soon be fulfilled!

By Eric Anderson and Mark Jenkins

From the November 2002 Trumpet Print Edition

In 1945 the world entered a new age with the successful testing of nuclear weapons in the United States. That same year, their potential for the unleashing of unprecedented horror was revealed with the nuclear destruction of Hiroshima and Nagasaki. The world had entered the nuclear age.

Ever since, mankind has lived under the threat of the nuclear cloud. Within 10 years the nuclear powers had stockpiled sufficient weaponry to literally fulfill a startling prophecy of Jesus Christ relating to the end of the age. His disciples had asked Him, “[W]hat shall be the sign of thy coming, and of the end of the world?”(Matt. 24:3). Jesus responded with a detailed prophecy of the events that would lead to His return. In that context, He described the conditions that would prevail in the last hour of man’s civilization as we know it: “And except those days should be shortened, there should no flesh be saved …”(v. 22).

Since the end of the Cold War, the prospect of surplus nuclear weaponry falling into the hands of smaller nations, even terrorist cells, has escalated dramatically. After the USSR’s collapse in 1991, more than 40,000 nuclear weapons, plus more than 1,000 tons of highly enriched uranium and 150 tons of plutonium, were left behind in former Soviet republics. The U.S. has allocated $10 billion to about 30 projects for dismantling nuclear weapons in Russia. But some experts say this funding is only about one sixth of what is needed. Rumors abound of nuclear devices and components of nuclear weapons disappearing from ex-Soviet countries’ inventories. Strong indications exist of black market trade in both nuclear technology and weapons.

The International Atomic Energy Agency, an independent branch of the United Nations, has confirmed 14 thefts of weapons-grade plutonium in the last decade—all from the former Soviet Union.

The Daily News, N.Y., reported that records recovered in Afghanistan show that “al Qaeda leaders have studied how to build nuclear devices” (Sept. 11). Though the sophistication of these documents is questionable, the capability of terrorists gaining access to bombmaking expertise was made clear by the Taliban’s pre-September 11 hiring of two Russian nuclear scientists.

In mid-October, North Korea stunned the world with its admission that it has been secretly developing a nuclear weapons program since the late 1990s, breaking a promise made in 1994 that it would not do so. Kim Yong Nam, ceremonial head of state, said, “If the United States is willing to withdraw its hostile policy toward the North, the North also is ready to resolve security concerns through dialogue.” In other words, they are not agreeing to dismantle their nuclear weapons program, but simply to open a dialogue if the U.S. meets its demands.

The nuclear threat is also looming in Iraq. U.S. President George Bush discussed Iraq’s nuclear capabilities in an October 7 speech, explaining that before the Gulf War, intelligence sources thought Saddam Hussein was 8 to 10 years away from developing a nuclear weapon. However, “after the war, international inspectors learned that the regime had been much closer. The regime in Iraq would likely have possessed a nuclear weapon no later than 1993. The inspectors discovered that Iraq had an advanced nuclear weapons development program, had a design for a workable nuclear weapon and was pursuing several different methods of enriching uranium for a bomb.”

Today, the inevitable reality is this: Nuclear (as well as biological and chemical) weapons and the vehicles that transport them have proliferated from developed to developing nations, and there is an increasing likelihood that these weapons will fall into the hands of terrorist groups. Donald Rumsfeld, U.S. secretary of Defense, predicted in May that terrorists will “inevitably get their hands on” weapons of mass destruction.

Most any government or terrorist could acquire nuclear weapons. “The world is awash, say experts, in nuclear material—much of it loosely monitored by governments, international agencies, or growing numbers of private concerns that oversee nuclear reactors” (ibid.).

It is not that difficult anymore for any determined nation to build a nuclear bomb. As the Plain Truth said in April 1980, “If you can enrich uranium, you can make a bomb.” At that time, only eight countries had such a capability. Today, 17 countries either have nuclear weapons or are believed to have the means to produce them.

Sixteen nations have the missile technology to hit distant targets (Associated Press, Sept. 11). Even more disturbing is that “32 countries produce more than 150 different kinds of unmanned drone aircraft capable of flying undetected below missile-defense systems to deliver a nuclear or biological payload” (ibid.).

Enriched uranium is not in short supply. “More than 22 tons of highly enriched uranium are controlled by civilians in some 345 aging nuclear power plants and research reactors in as many as 58 countries, presenting countless opportunities for theft” (Daily News, op. cit.).

The unpredictable and irrational nature of terrorist entities and rogue states without doubt gives rise to the risk of rash use of any nuclear weaponry at their disposal. But is this the limit of the nuclear threat? Can we be sure other “stable” countries possessing nuclear technology will always act responsibly? Will the countries with confirmed nuclear arsenals—Britain, China, France, India, Pakistan, Russia and the U.S.—never use that incredible power?

The history of nations has shown that whatever weaponry has been at their disposal has eventually been used. Are we safe in this world where such nuclear power exists?

Biblical prophecies, in fact, reveal that the greatest threat is not from Middle Eastern terrorists or rogue states, but from Europe—the German-led Eurocombine. The German nation has led the world into two world wars. As the Trumpet has often shown, events are leading toward a third and final showdown involving this European power that will culminate with the return of Jesus Christ to Earth (Zech. 14:1-4, 9). When the time comes, this power will not hesitate to exploit their nuclear capability (request our booklet on Nahum).

The great Creator of our universe revealed to the prophets of old certain end-time events which bear striking resemblance to the effects of nuclear warfare. Though these men did not use terms like thermonuclear or radioactivity to describe the horrifying times to befall modern civilization, they did describe the conditions we see on the horizon with alarming accuracy thousands of years ago!

For example, the Prophet Jeremiah foretold terrifying events that would occur immediately prior to the “Day of the Lord” and the return of Jesus Christ: “[B]ecause they are burned up, so that none can pass through them; neither can men hear the voice of the cattle; both the fowl of the heavens and the beast are fled; they are gone. And I will make Jerusalem [a type of the modern nations of Israel, including the United States and Britain] heaps, and a den of dragons; and I will make the cities of Judah desolate, without an inhabitant” (Jer. 9:10-11). Jeremiah’s description is of the aftereffects of nuclear warfare. No human or animal would be able to pass through a radiated area unaffected.

The extent of the devastation prophesied to come demonstrates that large-scale nuclear warfare will occur! God’s sure Word predicts that something will “make thy land desolate; and thy cities shall be laid waste, without an inhabitant” (Jer. 4:7; also Jer. 2:15; Ezek. 6:6). This kind of total destruction will be the result of more than an isolated terrorist strike.

The devastation that will result from nuclear catastrophe is vividly described in Revelation 9:17-18: “And thus I saw the horses in the vision, and them that sat on them, having breastplates of fire, and of jacinth, and brimstone: and the heads of the horses were as the heads of lions; and out of their mouths issued fire and smoke and brimstone. By these three was the third part of men killed, by the fire, and by the smoke, and by the brimstone, which issued out of their mouths.”

This nuclear fire will extinguish a third of humanity. The groundwork for that disaster has already been laid.

Man has no solution to the horrific nuclear nightmare that will fall on the whole world—but Jesus Christ does. As destructive as the coming nuclear nightmare will be, Matthew 24:22 shows that Christ will “shorten” events to prevent them from wiping out humanity completely.

But before that, Christ gives clear instructions to His disciples on how to escape these nuclear horrors: “Watch ye therefore, and pray always, that ye may be accounted worthy to escape all these things that shall come to pass, and to stand before the Son of man” (Luke 21:36). Clearly, this involves a process of repentance (Matt. 3:2).

When Jesus Christ returns, He will establish a new government. Sin, the basis of world evil, will be squelched. All nations will be forced to learn to live in peace and harmony—without weapons of war (Isa. 9:6-7).

In God’s world, nations “shall beat their swords into plowshares, and their spears into pruninghooks: nation shall not lift up a sword against nation, neither shall they learn war any more” (Mic. 4:3).