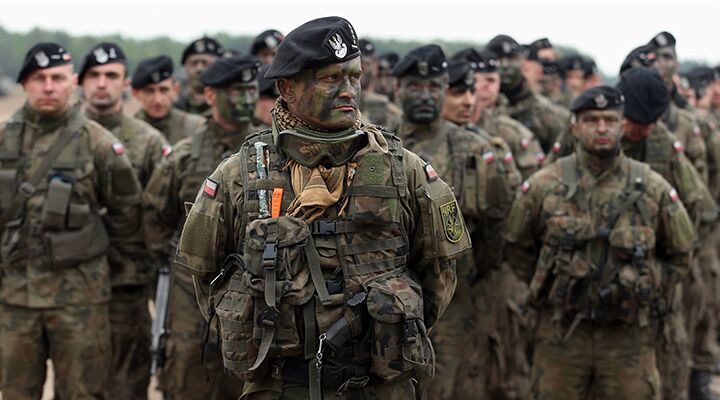 Nato has suffered a quarter of a century of existential angst. After all, what does an alliance forged to defend the West against Russia do once Russia has lost? nato has lost an enemy and is yet to find a role.

You would think that the rise of Russia would “solve” that problem—it has its enemy back. Instead, it has made the problem worse. To Central and Eastern Europe, it is almost like the old days: Russia sits next door and there is a genuine fear that the Russians could invade. Yet Western Europe suffers none of the same dread.

To half of the alliance, the Cold War is over. To the other half, it’s back on. Seventy percent of Poles say they view Russia has a major threat, according to a Pew poll published in June. For Germany, it was a little over half that.

This dissonance is at the core of nato’s weakness. And it was exposed in last month’s Pew poll.

The survey asked “If Russia got into a serious military conflict with one of its neighboring countries that is our nato ally, do you think our country should or should not use military force to defend that country.”

Collective defense is at the heart of nato, under its Article v. But in only two countries out of the eight surveyed, did a majority say they felt they should honor that commitment: the United States and Canada. In Poland and the United Kingdom, those in support fell only slightly short of a majority.

“The longer the Europeans refuse to even consider the use of military force to protect their allies, the more nato’s sense of collective defense and solidarity will weaken,” she wrote. “The inexorable outcome is the demise of Article v. What then is nato for?”

Britain’s Timesnewspaper compared the poll to Oxford University’s infamous vote that “this house will in no circumstances fight for its king and country” in 1933. “Benito Mussolini, after reading of the Oxford king and country debate, decided that Britain was a ‘frightened, flabby old woman,’” Times wrote in an editorial, warning that Putin could well draw the same conclusion.

The poll also showed that Poland’s trust in the United States for defense has collapsed. Of all the nato members polled, Poland is the one most under threat. In every other nation, over 65 percent of those surveyed said they believed America would defend a nato ally. In Poland, only 49 percent did. And no wonder. America had promised to defend Ukraine, for example. That didn’t do Ukraine much good.

Where is this leading? Paradoxically, to closer military cooperation within Europe.

Consider Poland’s situation. It knows it cannot defeat Russia in an all-out war. It has been beefing up its military and putting together an impressive tank fleet to make any such war more expensive. But to have a chance to survive or, even better, to prevent such a war, it knows it needs allies.

Now, if you’re not sure your allies will honor a piece of paper they’ve signed, how do you make sure they’ll protect you? You hug them closer. Invite them into your country. Have them build bases in your borders. Have your soldiers serve in their armies. Make it almost impossible for an enemy to attack you without attacking them too.

This is exactly what Poland is doing. A great deal of that reaching out is aimed at America. But there’s one more country they’re working hard to draw close to—Germany.

This strategy of drawing close to wavering allies is exactly what we see with nato’s new Very High Readiness Joint Task Force (vjtf), deployed for the first time in Poland last month. Designed to deploy to any nato state in 48 hours, it is nato’s fastest responding unit. Dr. Martin Zapfe, director of the Global Security Team at the Center for Security Studies think tank in Zurich, wrote that the vjtf “is best described as a ‘mobile trip wire,’ constituting a deployable guarantee of alliance solidarity that should make it more difficult for Moscow to attack an individual ally without striking all of the (major) allies at the same time.”

If a country in Eastern Europe feels that Russia may be getting ready to send in its little green men, it can call on nato for help and, at a moment’s notice, this small but quick force can be there on the border. If Russia did invade, it would have to attack this small force made up of as many nato members as possible. The idea is that Russia would then back down from this certainty of war with all nato members.

In its initial configuration, this “trip wire” strongly involves Germany. The vjtf is built around the German-Dutch Army Corp. The Corp’s staff make up the command units of the new force. The head of the Corp, Lt.-Gen. Volker Halbauer, is the head of the interim vjtf. In fact, this interim vjtf is essentially a rebranded German-Dutch Corp with a few other units bolted on. Even when it reaches its full strength of 5,000 soldiers, one fifth of them will be German.

Historically it’s an incredibly odd situation. The Germans have been put in charge of a new blitzkrieg force and invited into Poland.

“The location of these maneuvers underlines the historic significance of Exercise Noble Jump,” wrote William Cook in Britain’s Spectator magazine. “This is Silesia, part of Prussia for several centuries and now part of Poland. It’s been a battleground throughout European history. Will it be a battleground again? As the German and Polish defense ministers pose for photos together beside a tank, you can’t help but marvel at how history has turned on its head. Twenty-five years ago this was Warsaw Pact territory, and Poland and Russia were allies. Now Poland and Germany are allies, and Russia is the ghost at the feast.”

That’s a potent symbol of what is going on here: Eastern Europe fears Russia, doesn’t trust American guarantees or its nato allies, and so is forced into close cooperation with Germany.

This close integration goes beyond nato. The Dutch Army has three brigades. One is officially part of the German Army, and a second is on its way to joining. The Netherlands is signing the heart and core of its army over to Germany. Poland and Germany are beginning on a similar path together. Their two navies closely cooperate and their armies have swapped a battalion to pave the way for future cooperation—a Polish battalion is serving in the German Army and vice versa.

Much of the cooperation so far is prompted by a desire to save money. National survival promises a far stronger motivation.

Eastern Europe is still reaching out for America and calling for American bases. But U.S. President Barack Obama has proved reluctant to fulfill this request. Nonetheless, these appeals will continue. But Eastern Europe knows it will never integrate with the U.S. Army. Those nations will confine their efforts to combine forces with Europe.

But why reach out to Germany? After all, France and Britain spend more on their military. But Germany has shown the most interest in close military cooperation with its neighbors.

That doesn’t mean Germany will embrace all of Eastern Europe’s requests. It has a difficult balancing act to maintain. The Germans have a profitable relationship with Russia on the one hand; yet on the other, it does not want to alienate Central and Eastern Europe.

Watch for the combination of a strong Russia and weak-willed U.S. to force European states to bind together in exactly the way the Trumpet has forecast for years. For more information on Europe’s strategy to create a combined European army, read our article “Under Construction.”