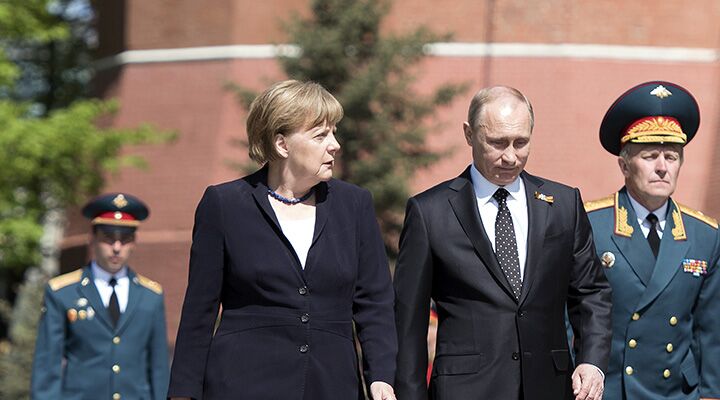 Yet more signs that the two are working together

Is the cold war between the West and Russia over Ukraine finished? For the United States certainly not. But Germany, and therefore much of the European Union, are returning to business as usual.

On June 22, the EU voted to extend sanctions against Russia. Yet in other areas, the relations between Germany and Russia are improving.

The biggest sign of this is the Nord Stream gas pipeline between Russia and Germany. That’s an important story in its own right—read Robert Morley’s article “Gazprom’s Dangerous New Nord Stream Gas Pipeline to Germany” if you’ve not done so already. The two countries have teamed up on a project that allows Russia to cut off gas to any Central or Eastern European country it wants to, while keeping its lucrative contracts with Western European customers intact.

This is far more than merely a business deal. Anything of this magnitude would have been discussed, and almost certainly approved, by the German government. In fact, it appears European governments may have done some serious behind-the-scenes maneuverings to make this happen.

Austria’s omv energy conglomerate has an important part in this deal. On June 3, it announced that Rainer Seele would be the new ceo. He officially started July 1. omv was once a key player in one of the pipelines designed to bypass Russia. But Seele is known to be pro-Russia. He is president of the German-Russian Chamber of Commerce and has “good and close contacts with Russia and Gazprom” as Austria’s Die Presse newspaper puts it. On the same day that his position in omv was announced, he was visiting Gazprom’s headquarters. The Nord Stream pipeline is just one of several important deals with Russia that he is considering.

The Austrian state owns almost a third of omv. It wouldn’t have been hard for it to get together with a few more stakeholders to put in place the new ceo. More likely than not, the Austrian government just pushed its most important oil company in a new, pro-Russian direction. The new pipeline, therefore, is a clear sign that several European governments are open to business with Russia.

Another sign of improving relations was the strong European attendance at the St. Petersburg Economic Forum on June 18 to 20. Billed as Russia’s version of the Davos forum in Switzerland, it typically attracts highfliers from around the world, especially in the energy industry. Last year, in response to Russia’s invasion of Ukraine, the West discouraged its businessmen from attending. For America, that continued this year. Only 12 chief executives from American companies attended—and even that was billed as a high turnout.

For Europe, it was different. “The attendance list, which includes oil giants BP, Royal Dutch Shell and Total, suggests that European companies are growing increasingly anxious to return to business as usual,” wrote Germany’s Deutche Welle. It also shows that European governments aren’t pressuring their businessmen to boycott the summit the same way America is.

Finally, Russia’s handling of the Greece crisis indicates that, behind the scenes, relations with Germany are pretty good. Russia bowed out of the whole situation on June 30. “This is Greece’s problem,” Kremlin spokesman Dmitry Peskov said. “(It’s a matter) of Greece’s relations with its creditors, it’s not a matter for us.”

Russia isn’t exactly flooded with spare cash right now, so using the euro crisis to buy an ally in Greece would have been a challenge. But Russia could have made the Greek negotiations much harder just by keeping that option on the table, even if it had no intention of following through. By publicly ruling it out, it has strengthened Germany’s negotiating position.

Why would Russia be playing nice just weeks after Europe extended its sanctions?

The oil pipeline could well be a big part of it. That’s a big win for Russia. It can safely assume that the European sanctions are a temporary measure that will remain in place for only a year or two. A longer term threat is Europe’s “third energy package”—a piece of European legislation that aims to reduce the EU’s reliance on Russian oil and gas and halt Russia’s takeover of Europe’s energy infrastructure.

Several poorer European nations have been chafing under the energy package. They are struggling financially, and Russia is eager to buy their energy assets or pay them good money in order to build new pipelines on their territory. These nations will be even less likely to listen to lectures from Europe after Germany has made a similar deal with Russia. The Atlantic Sentinel wrote, “The deal … opens up those countries that have taken the hardest line with Greece to charges of hypocrisy.” If Germany’s pipeline goes through, then it will deal a serious blow to Europe’s push for energy independence.

Europe think tank Bruegel notes under one scenario that “the proposals are thus intended to create political cleavages within the EU, at a moment when the EU is toughening its stance against Russia due to the Ukraine crisis.”

“In such a scenario, this waltz of pipelines thus represents a new chapter in Russia’s enduring divide and rule strategy vis-à-vis the EU energy market,” it concludes.

But if Germany is working with Russia again, why allow the sanctions? Germany has a difficult balancing act. On the one hand, it has a lot to gain from Russia. But if it goes too far in that direction, it will lose the trust of Central and Eastern European nations, such as Poland or the Baltics, that are looking to Germany for protection.

The German Institute for International and Security Affairs, a think tank that provides advice to the German parliament and government, recommended exactly this path back in May. Working in “strategic concert” with Russia would be “unacceptable to many of the Russia-critical and traditionally pro-Atlantic member states in eastern and northern Europe,” it wrote. Opposing Russia would mean Europe must “bear high costs” and be willing “to remain engaged even in the face of massive disruption and to act in resolute unanimity.” Furthermore it would “minimize possibilities for cooperation.”

Instead, it recommend a policy of “cooperative confrontation.” This strategy would aim to “decouple certain areas—in the first place energy and international and global security—from conflicts of interest over ‘shared neighborhoods.’” In other words, Germany should work with Russia on energy and security and leave the conflict in Ukraine to one side. To this end, the European Union should work “to restore good relations.”

This is exactly the course Germany is now taking. For more on Germany’s relationship with Russia, read our article “Another Molotov-Ribbentrop Pact?”