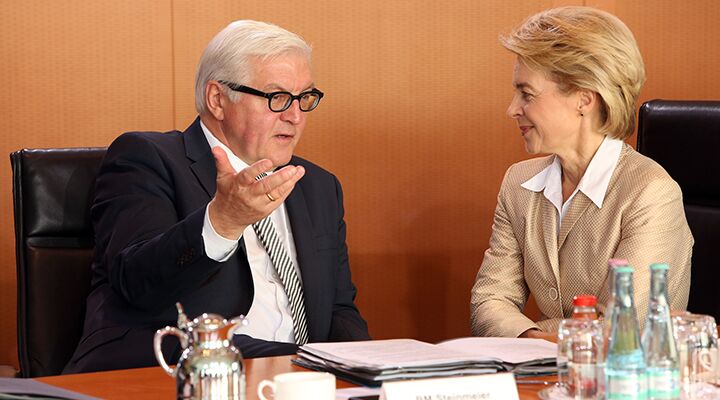 Germany and Poland signed an agreement on October 29 to deepen cooperation between their armies at an annual conference of the top leaders of the German Army in Berlin. Under the agreement, a Polish battalion will serve under a German brigade, and vice versa. The two armies will conduct training and exercises together, exchange officers, and develop common rules and standards so they can integrate more closely in the future.

German Defense Minister Ursula von der Leyen called the memorandum of understanding “a milestone in our joint cooperation.” She praised the “deep … trust between our two countries in the security and defense policy.” She said that the “security … of our neighbor Poland is quite essential for our own.”

In her main speech, von der Leyen made the need for this type of cooperation clear. “Around Europe we are experiencing instability and crises,” she said.

“A rapid return to normality I do not see,” she warned. She told the assembled leaders of the German Army: “The claims of the German security policy will continue to rise—and thus the demands on the armed forces.”

Von der Leyen reiterated the call that she, German President Joachim Gauck and others have made throughout the year: for Germany to play a bigger role in the world. The trouble is, with the German military undertaking 16 different missions around the world, it is starting to become overstretched. Much of its equipment needs maintenance, and von der Leyen strongly hinted that she believed the Army needs more money.

Cooperation with other nations is a quick fix for this, allowing European nations to undertake foreign missions at less cost. Germany has already made several strides in this direction, particularly with the Netherlands. The Dutch Airmobile Brigade has already been subordinated into the German Army, and one of its mechanized brigades is preparing to follow suit.

Last year Poland signed an agreement with Germany to increase their naval cooperation with 28 joint projects, including joint monitoring of the Baltic Sea. Poland is also accumulating a large number of German tanks. It bought around 130 Leopard 2 tanks about 10 years ago, and purchased 120 more last year, which are still being delivered.

The Germans sold the tanks cheaply, but it means that Poland must reorganize its armored brigades. Its other main battle tank, the PT-91 Twardy tank, an upgrade of the Soviet T-72, requires only three crew members. The Leopard 2 needs four. By investing in the German equipment, the Polish Army is forced to make itself more compatible with the German Army, making it better able to work alongside German soldiers.

Germany’s military and political leaders have made clear that they see this cooperation with individual nations as a path toward an integrated European military. “The hour has come, finally, for concrete steps towards a European Army,” Hans-Peter Bartels, the chairman of the German parliament’s defense committee, said earlier this year. For more on Germany’s efforts to build this combined military, read our recent article “Germany Is Building a European Army Before Your Eyes.”