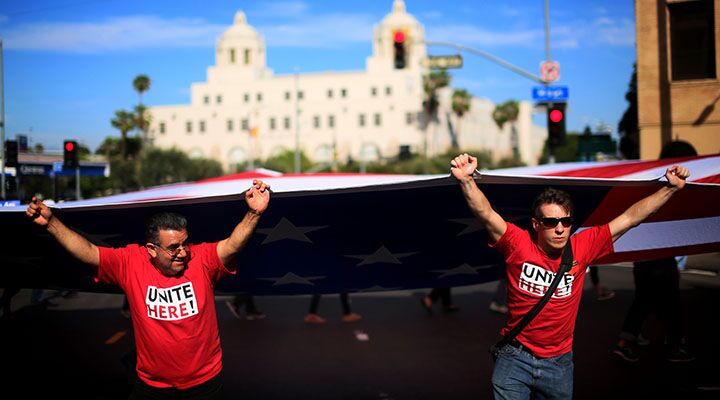 What would you do if some government bureaucrat told you that your coffee shop or widget factory didn’t make enough money to justify letting you stay in business, and you were hereby ordered to shut down?

You would probably show him the exit.

If a politician ever explicitly told voters that the government should decide if businesses are profitable enough to justify letting them exist, he would get voted out of office.

After all, many products take years before they turn a profit. Facebook and Amazon—both multibillion-dollar businesses today—took many, many years before they turned a single dime in profit. If a small-business owner wants to make a product, as long as it is not illegal, what business of the government’s is that?

None, most would agree.

Yet Californians voted to give the government this exact mandate—and the power to shut down any business that doesn’t make enough money to pay their employees a “fair wage.”

It is part of the so-called war on poverty: Simply ban any business that doesn’t pay enough. And voila, no more low-paying jobs—only high-paying ones.

Last month, Los Angeles, the nation’s second-largest city, passed a law raising the minimum wage from $9 per hour to $15 per hour by 2020. The New York Times called it an “unprecedented increase” that could potentially impact half the city’s workforce.

“We’re leading the country; we’re not going to wait for Washington to lift Americans out of poverty,” Los Angeles’s mayor said in an interview.

Yet will this new law really help poor people?

Hibbs says the new minimum wage will cost his small business a staggering $80,000 per year.
Consider the case of Brian Hibbs, owner and operator of Comix Experience, a famous bookshop on San Francisco’s Divisadero Street. Hibbs, who describes himself as a progressive, opened the store in 1989, when he was only 21 years old. Since then it has turned a profit every year without fail, he told the National Review.

Then last year, 77 percent of San Francisco voters voted to raise the city minimum wage to $15 per hour by 2018.

Hibbs says the new minimum wage will cost his small business a staggering $80,000 per year. “I was appalled!” he says. “My jaw dropped. Eighty thousand a year! I didn’t know that. I thought we were talking a small amount of money, something I could absorb.”

Now that Hibbs realizes the full impact, he says that there is a good chance he will be pushed out of business. He notes that his employees would gladly work for less than the new minimum wage to keep their jobs. He asks, why can’t consenting individuals agree on a salary?

The plight of Comix Experience is one that now faces thousands of other small businesses in California. Some will be forced to close. Some will reduce work hours. Others will find it more economical to embrace mechanization and replace low-paying jobs with robotics (a trend that is already underway).

So why do politicians, who should know better, keep pushing these hurtful policies? The Los Angeles Times explains in the extraordinary article: “L.A. Labor Leaders Seek Minimum Wage Exemption for Firms With Union Workers” (emphasis added throughout).

The unions who pushed so hard to get politicians to raise the minimum wage, and who vilified those against it, are now trying to get exemptions for themselves and businesses that have unions.

You can’t make this stuff up. So the question arises, why are they backtracking?

It is about power. They want the law to say that if a business is unionized, the business does not have to pay the new minimum wage. They hope this will result in many more businesses unionizing to avoid paying the minimum wage the union just pushed through. Of course the unions want all the extra money that will come from union dues. And of course the politicians want their chunk of the cut. Fourteen of 15 Los Angeles city councillors voted to raise the minimum wage. They received over $180,000 in campaign donations from unions last year.

But there may be something else going on too.

Some union members—the ones actually holding jobs and paying dues—are starting to worry that they could lose their jobs.

Raising the minimum wage from $9 per hour to $15 per hour may not sound like a lot, but that’s a 66 percent increase. There will be real-world consequences.

Those people who actually get to keep their jobs get paid more, but what about all the people those city councillors just mandated out of a job? And perhaps even more importantly, what about all the jobs that won’t be created because labor is too expensive?

Proponents of minimum-wage laws always frame it as showing love to poor people. It’s about compassion. They say it is a way to make the greedy businesses share the wealth. It’s about fairness.

But in reality, increasing the minimum wage is the opposite of showing love to people.

It comes down to this: If you are a low-wage earner and you get to keep your job, you will get a raise. Since it is an across-the-board raise that affects half of all jobs in Los Angeles, for example, much of that gain could be wiped out by inflation. But realize this: Your increased pay comes at the expense of the people who lost their jobs. And it comes at the increased cost to social welfare programs that will inevitably result.

And there will be consequences—both in California and the rest of the nation.

For a picture of the future, look no further than General Motors and Chrysler. Unions and corrupt politicians took two of the most profitable manufacturers in the world—and virtually destroyed them. If the bankruptcy of Detroit isn’t enough, consider Chicago. Examine the many other Illinois cities on the verge of bankruptcy.

There is a saying: As California goes, so goes the nation. In the short term, the new minimum-wage laws will slow growth. In the long term, they could destroy growth—as government bureaucrats pick and choose which businesses are profitable and “fair” enough to be allowed in California