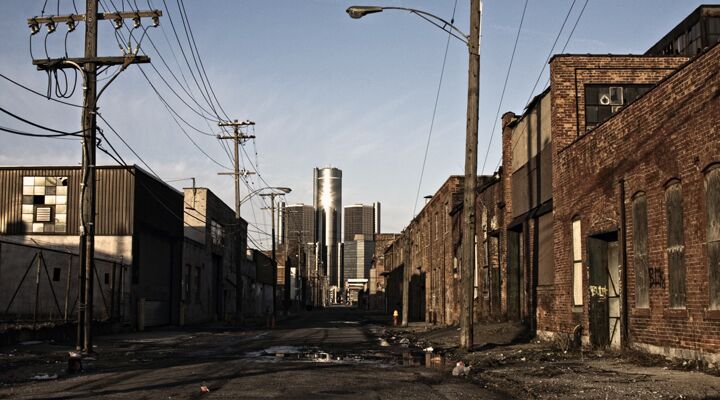 If ever an American city was a warning for the nation, it is Detroit. Its crumbling mansions, overgrown boulevards and abandoned factories drive a message home to those who will pay attention. We cannot afford to ignore this once-great city. Why? What killed Detroit is killing America.

Detroit used to be synonymous with wealth and prosperity. It was a city humming with big-finned cars and Motown rhythms. Factories churned out products that ended up on store shelves around the world. Full employment empowered high salaries, flourishing schools and manicured storefronts, with flashy neon lights lining the boulevards. Multiple generations of families shared the same streets and barbecues.

In its heyday, Detroit had the highest median income and highest rate of home ownership in the country. It also had one of the highest standards of living of any major city in America—and hence, probably the world. People flocked there to transform the American dream into reality.

Take the average Detroit high school student to the top for the panoramic view, then describe in chrome tones what the Motor City used to be like. He would probably think you were joking.

There are two reasons that student would be confused.

One: The reality on the ground is that the city is a ruined, decaying, post-industrial, almost post-apocalyptic ghost town. At its peak, Detroit boasted almost 2 million residents. Today, more than half of that number are gone. Astoundingly, even the dead are leaving. Suburban dwellers who don’t want to risk heading into the city to visit gravesides are having their deceased relatives dug up and transferred to local cemeteries.

More surreally, unburied bodies are piling up as well, the Times reported in November. That month, the number of unclaimed bodies reached a record high. The dead were not murder victims—although crime is soaring, and Detroit remains the murder capital of America. Most of these dead died of natural causes; it is just that family members cannot afford to bury them; the city can’t afford to bury them either, so they pile up in the freezers.

Two: Most students have a poor grasp of history. In 2008, less than 25 percent of freshmen actually ended up graduating from high school—the worst rate in the country. Almost half of Detroit adults are considered functionally illiterate.

Gazing out over Detroit, you would see a city in transformation—or is it disintegration? In contrast to the shiny new GM tower, Detroit is cannibalizing itself. Over 60,000 abandoned, gutted and stripped houses populate the landscape. With each new foreclosure, another home opens itself up to vandals, thieves and arsonists. On one street alone, you can see six partially burned homes without moving your feet. Wrecked, abandoned homes push property prices down further, which encourages other underwater homeowners to mail in the keys too.

The situation is so bad that banks are now refusing to retake ownership of some homes. The cost of back taxes and repairs just isn’t worth it. Houses sell for $1. Livable ones sell for $6,000, less than the price of some ride-on lawn mowers. The city has no money to demolish the death traps, so they remain standing.

Then there are all the abandoned commercial and industrial structures, lurking like monolithic skeletons. Who would want these properties? They were made to produce massive amounts of quality products—something foreign to today’s Detroit. And with all the years of industrial chemicals polluting the soil and groundwater, no one can afford the remediation costs.

At night, you look down on whole patches of city that are dark. Parts of Detroit have reverted to hollowed-out, pre-industrial places where no one lives or works or stands in the streets anymore—only mile after mile of lonely concrete bones.

Punctuating those dark patches are regularly appearing spots of flickering flame. The Weekly Standard called Detroit the “city where the sirens never sleep.” Since the city is overwhelmed with buildings to demolish, firefighters are often forced to risk their lives fighting fires at the same old structures.

But as troubled as Detroit is, it is positioned to get worse. Official U.S. unemployment stands at 10 percent, but real national unemployment is over 17 percent and rising (as measured by the Labor Department’s U6 unemployment figure, which includes part-time workers who want full-time jobs and discouraged job seekers who have stopped looking for work). Unemployment in Michigan is 20.9 percent. In Detroit, virtually half the workforce is unemployed—a rate far higher than during the Great Depression. And there is no U-turn in sight.

With so many people out of work, property owners had better hope that lawmakers are able to keep extending unemployment insurance. Residents should also hope that the Chinese keep lending America money, because if they ever stop, so will the welfare payments. And that means that Detroit is a powder keg with massive explosive potential. The gangs of Detroit will head to the suburbs.

America needs to wake up to what Detroit has become.

“Detroit’s history has gone the way of Rome and Athens and Constantinople,” says L. Brooks Patterson, a longtime executive from Oakland County, which includes Detroit’s northern and more affluent suburbs. “It is what history does. History moves on. And history has moved away …. Detroit will never again be where those other cities were ….”

Once a cradle of the middle class and a bastion of economic productivity, Detroit is now a stark example of the unraveling of both. It has often been said that as GM goes, so goes the country. How much more should America then pay attention to Detroit? This city is the home of not just GM, but also Ford, Chrysler and a host of other manufacturers and businesses and families.

The forces that built Detroit into an economic superpower also helped build America into a superpower. Now the forces that destroyed Detroit are doing the same throughout the country.

America’s failed industrial policy promotes the offshoring of American manufacturing. Detroit, Chicago, Cleveland and Milwaukee felt it first, but now those same policies are promoting the offshoring of America’s other strategic industries too. The job losses have spread to New York and Los Angeles. Power-hungry unions more intent on getting rich than on making a quality product impacted Detroit’s Big Three, but the same types of unions hold hostage and handicap many American businesses. Big business, in the search of short-term profit above all else and at the expense of mistreating employees, gave rise to the unions. Corrupt politicians looking to purchase votes sell themselves to the highest bidder—this too is a national phenomenon. Consumers, fat on the wealth of previous generations, wax lazy. Just like in Detroit, increasing debt is looked to as the national savior for America’s economic ills.

Detroit’s downfall has many causes—books have been written. But the most fundamental and important cause is one that most observers have overlooked.

The primary cause of Detroit’s (and America’s) dramatic downfall can only be understood by identifying the source of its original prosperity.

Yankee ingenuity, work ethic, economies of scale, proximity to resources, mass transportation, low taxation and a skilled labor pool are all factors. But they are not the most important and essential factor.

The reason America (and Detroit) became so prosperous stems from an ancient promise God made. You can read about it in the book The United States and Britain in Prophecy. It is because of that promise that America became the inheritor of almost half a continent—and not just any continent. When the pilgrims arrived they became the recipients of a vast, pristine land, overflowing with the choicest of agricultural, mineral, hydrologic and geographic blessings imaginable.

America’s historic leadership in industry and technology—the fact that America used to be the largest oil, coal and steel producer in the world, that it used to be a major net food exporter, that it once was the world’s factory, that it used to control and own the strategic Panama Canal sea gateway, that it is the only country to ever put a man on the moon—was a blessing that directly trickled down from the fulfillment of that promise.

In short, it was God who showered blessings upon Detroit—and America. It was God who provided America with its formerly unrivaled levels of prosperity.

And it is because the conditions of retaining those blessings have been broken that those blessings are now being removed. It is all about cause and effect. Sustained blessings for obedience, and curses for disobedience—it is a basic principle of the Bible (Leviticus 26). And it is a principle that we would all do well to remember.

Detroit is a warning for America. Read the billboard. Detroitification is heading toward a city near you.